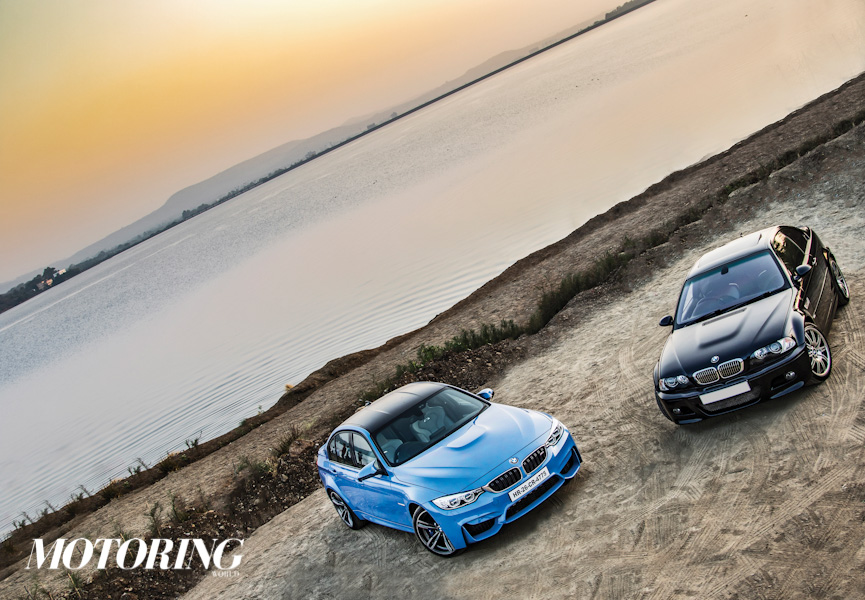 On my scribble pad’s to-do list is a ‘to watch’ sub-list. A documentary film titled Adrenalin headlines it. I am not quite sure when I’ll turn around to find time, but in my mind, it’s already one of the greatest documentaries of our times. Why? Because it’s about BMW and its successes in touring car championships, thanks to the M3/3 Series. Jonny Cecoto, Roberto Ravaglia, Hans Joachim Stuck, Andy Priaulx — racers who put BMW on the top step on several occasions talk about their experiences and moments. Goosebumps guaranteed!

Tackling a left hander in the F80 M3 at 6 am on a Sunday morning with the Michelins expressing mild levels of protestation, it felt every bit as inspired by its motorsport genes. The measure of a steering is how it weighs up, how accurate it is and if it provides enough feedback to the driver; on all three counts, on a scale of one to ten, the ratings were 9, 9 and 8. Okay, so modern electric steering units are still to get to the levels of feedback of hydraulic units from the late ‘80s onwards, but it’s still at a comparatively higher level. That’s partly thanks to BMW committing an engineer just for steering feel — beat that! The next corner, a right hander, led to scaling up the level of throttle input. The steering still wasn’t wavering from those figures, the rear tyres just starting to get a bit more slip (we are in Sport+ mode) and the front end still not loading up enough to worry about a sudden change of direction were a scampering cat or human to come in the path. That nearly 50:50 weight balance is a story of  legendary proportions.

Not far behind, in a 2006 example, is Behram Marker, his E46 staying just as large in the mirror as it did two corners ago. As Param wrote in his story in 2005, ‘it makes you want to go to work on Sundays, national holidays even!’ It may have more mass to move, but it’s also a naturally aspirated work of wonder and one with a much slower gearbox — an SMG-II to the F80’s lightning fast dual-clutch. There are two things in common, though, between the two M3s, apart from the badges. One is, they both have straight-sixes and secondly, they are finely balanced and honed machines.

There’s a reason why the two protagonists are here together. It’s the 100th year of BMW and the M3 in its 30th year is one of the finest carlines to ever emerge from Garching, home to the Motorsport Division. In our books, it’s one with a straight-six that deserves top billing. The E30 was the one that laid the seeds. The E36 gained two more cylinders but you don’t find as many huggers on the interweb. The E92, the successor to the E46, went for a V8, as if it had been built in Australia. So by any count of personal bias, the E46 and the current car had to be together because BMW M engineers insist that the E46’s soul had to be replicated in the F80. A tough ask, indeed.

The E46 came at a time when the world had already asked the millennium-bug question and found its answer. Emissions were a lukewarm topic and turbochargers were for trucks. The M3’s 7900-rpm rev limiter was the perfect middle finger to the world’s problems. The only hitch was, every time you started the engine, when it was cold you were greeted by warning blocks for every 500 rpm from mid-revs. As the lit blocks went off one by one, you could hit the redline and enjoy the sweet thrum of a 343-bhp straight-six. At 3.2 litres, the S54 motor was a pure M-Division creation for the sole purpose of use in the M3/Z4.

Even that morning as I let Behram pass me, one could hear the double VANOS (BMW’s VTEC equivalent) equipped straight-six deliver a pure treble edge from mid-revs. To suggest that the tricked-out exhaust and speakers of the F80 sound fake would be doing it disservice. In fact, its bassy note is quite enjoyable and with the windows rolled down, it can get intoxicating. But for now, the E46. We quickly swap cars a few corners  later and I am just happy  to be back in a seat that is pure ecstasy.

It feels its age immediately. More buttons, a larger steering and leather around the door handles and seats that have started to bubble and fray. All of which counts for nothing once you get it going and are greeted by more corners. The hydraulic power steering on the E46 is a study in sublimity. To the F80’s 8, this one is an 11. It’s so direct and precise, you can feel the over-paved sections of tarmac and camber changes. This is not a car that tramlines easily, the higher profile nature of the tyres and the slightly softer suspension really lending itself very well to bumpy sections. It has the M-Button that alters throttle response and the SMG-II has seven (!) settings to play with, altering the change in gearshift crispness.

None of which really makes a big difference, because the 6-speed SMG or Sequential Manual Gearbox is just a different name for an automated/robotised manual transmission. Upshifts aren’t crisp and rather slow in this day and age, though downshifts are fantastic. It’s a car that thrills you while tackling corners (downshifting) and frustrates you a bit on straights (upshifts). Yet, in my limited experience, no coupe feels as alive on straights or even expressways as the E46 does. That’s because the way the suspension tackles undulations, the wheel travel and even the dead-centre feel of the steering puts a smile on your face like no modern sports coupe can. Heck, Motor Trend gave it the best sportscar gong of all time in 2009 — that should say something!

Which should also beg the question, why the M3 sedan and not the coupe? Why the F80 and not the F82? Because badges matter more than anything else. The Yas Marina Blue F80 not only gets a turbocharger each for cylinders one to three and four to six, it’s got at least 50 per cent more torque and a dual-clutch gearbox. To keep that wonderful 50:50 balance in check, it’s got a carbon-fibre strut brace, driveshaft and even the roof. The carbon-fibre roof started with the manic E46 M3 CSL and is now a standard feature on the M3/M4 ever since. Like the E46, it, too, gets the power bulge on the bonnet, but it’s not so much to incorporate the air intake as it was earlier on. 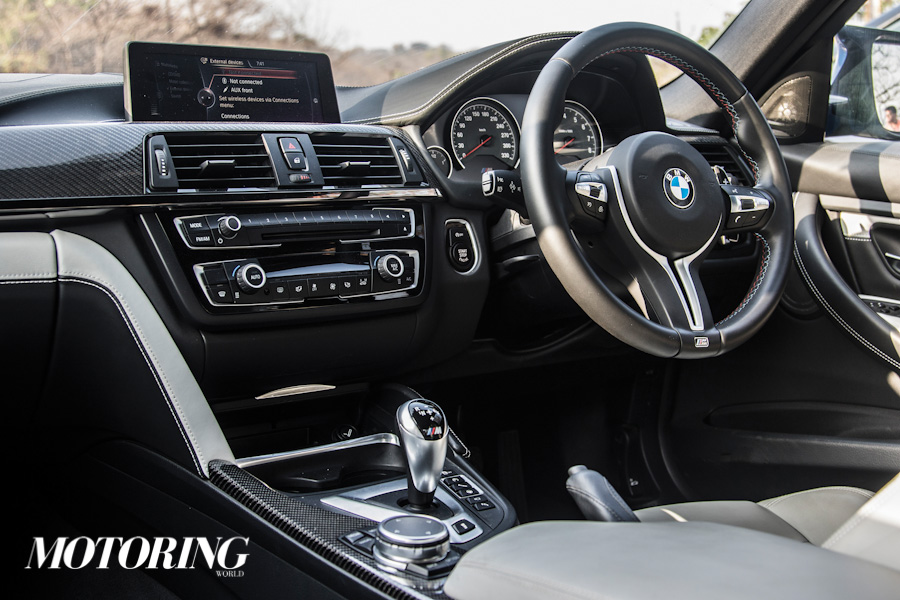 A lot of the weight saving was done to accommodate the turbos and their plumbing, to reduce weight on the front axle and therefore inertia while braking. Despite their best efforts, there’s still some of it, especially while tackling downhill sections, but a lot of it is also under control due to lighter carbon ceramic stoppers. The sedan lacks some of the rigidity of the M4 coupe, but the difference is so marginal, most might not even realise it. But what it does have is explosive performance; at 4.1 seconds to 100 kph, it’s a second quicker than the E46, which was amply evident once both Behram and me decided to turn up the heat. All my efforts to stay glued to his tail started to disappear after a while, making the drive that much harder. We drove on for a while, the E46’s intake roar now filling in the cabin, while Behram couldn’t stop chuckling about how much quicker the F80’s gearbox feels. ‘The difference is night and day,’ he said. Couldn’t argue with that one.

Placed next to each other, it’s hard not to appreciate the E46’s design lines. It’s every bit as contemporary, but has the makings of a design classic in the years to come. And the more I stared at the new kid, the more I found design details to like — the 20-inch wheels with the rear wheels toed out really make it look purposeful. So does the stingray line that runs across the flanks, the gurney lip spoiler and the flared out wheel arches. It’s a more modern interpretation of aggressiveness, to the E46’s toned down lines, but both deserve their rightful place under the sun.

The truth is, outside the Porsche 911, no everyday sportscar has proved to have fine attributes such as power, balance and agility as the M3. And like the Porsche, it has stories to tell, from the racetrack to the road. If anything else, the M3 or M4 or whatever name BMW wishes to retain, the idea behind the car is crystal clear. A high-revving, fast charging, beautifully balanced car that gets appreciative nods, both from drivers and onlookers. A car for keeps.

We’d like to thank Behram Marker for lending us his beautifully maintained M3. Cheers, mate!