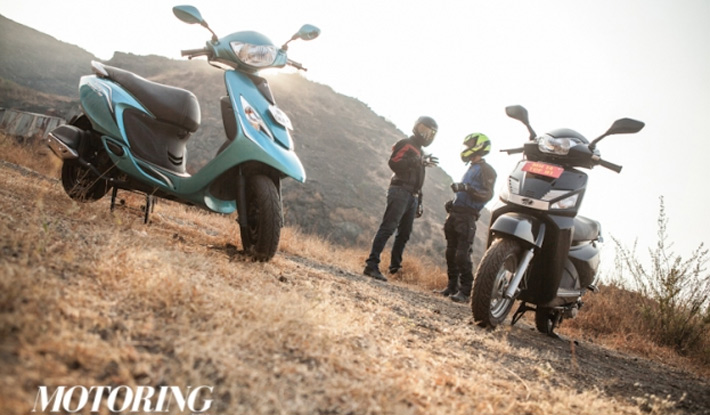 Fun is a subjective term, frankly. The only thing that matters is whether you’re subscribed to the notion of following what you personally believe is fun — doesn’t matter what others think. Me? I’m happy when wheels are involved — two or four. That’s why we’re back to Falcon Hill, a small section of steep roads that have tight twists and hairpins conducive for our bike shootouts. Regulars will remember the scooter hill-climb Kartik had conducted not too long ago, and now we’re back with two 110cc scooters to give you a definitive verdict on which one’s more fun to ride

In the green corner, there’s the TVS Scooty Zest. Now, I’m going to try and not let this come off as a sexist comment, but for a scooter aimed at women (TVS’ words, not mine), it’s an absolute hoot to ride! It’s not the most butch design, granted, and it’s got rather unimaginative styling cues, but all’s forgiven once you get astride this little scoot. Powering it is a 110cc motor that makes 8 bhp and 0.8 kgm of torque — humble figures to say the least, but out on the road it translates to anything but humble. Credit goes to the 94 kg weight, the CVT ‘box with revised ratios and a 0-60 kph time of 11.1 seconds (claimed) for the surprisingly fun ride. I’m not the best judge of finding out true top speed, mainly because I weigh probably the same amount as the number of the top speed itself, but Ashok’s ride on the Zest saw him hit 97 kph on the speedo, so it’s plenty fast as well.

In the other corner, there’s the Mahindra Gusto, the bulkier-looking and better-looking of the two. Powering it is also a 110cc engine that also makes 8 bhp and 0.8 kgm of torque. This, however, doesn’t translate to a similar feel on the road. It feels lethargic in comparison, almost unwilling to be pushed. There’s enough power throughout, but you’re really much happier when the Gusto is ridden sedately (read, anything under 70 kph or so).

This gets us neatly on to the part of the ride and handling bit, which is what Falcon Hill is for. First up, I was astride the Gusto. Now, the Mahindra gets telescopic forks up front and 12-inch wheels, which makes quick, back-to-back direction changes a fun exercise. It’s not like it’s born to do this, but it’s not like I had a hair-raising time riding the Gusto, either. It’s stable enough through corners and lets you lean the bike in nice and easy, just enough to make you look good in front of the camera. What I didn’t enjoy particularly, however, was how the back kept bouncing around for a bit after I’d murdered a bump on the road. It’s a bit unsettling, to say the least.

Next up, the Scooty Zest. So far I’d been a bit partial to the Zest because of how peppy and fun it is in the city and even on the highway. I fully expected it to retain its advantage around Falcon Hill, and having had a go around the twisties on the Gusto, I was right. The Zest feels so much more agile through the corners, so much livelier, and, most importantly, so much more fun. My tinted helmet visor hid the silly grin I had plastered as I rounded the last hairpin on the way to the top of the hill, scraping the heat shield on the exhaust while at it. The tyres just didn’t tire out, so I guess TVS’ claim that the tyres have been optimised for tarmac and gravel as well holds true.

So there you have it. The Mahindra Gusto is neat scooter, and it has plus points aplenty, but if it’s fun you’re after, and if it’s a choice between these two, I’d suggest plonking your money on the TVS Scooty Zest. No two ways about it.