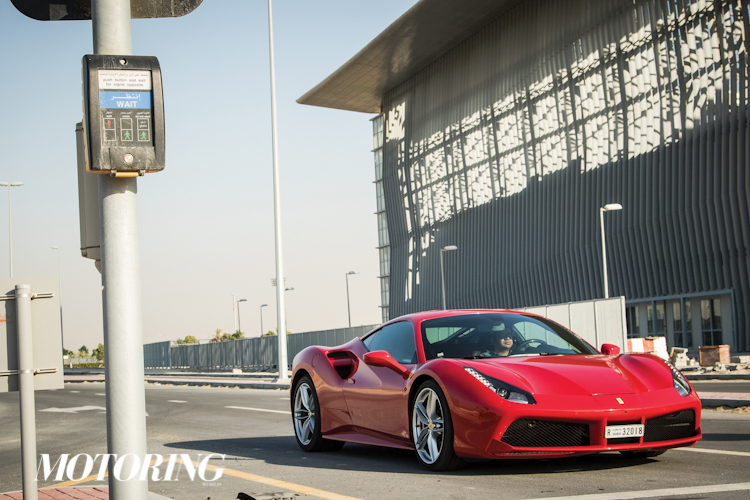 How does one rate progress? In the 1980s, Ferrari, because of its involvement in motorsport, thought it prudent to install turbos on its 288 GTO and the F40 (they essentially ran the same motor but different specs). Until then, Ferraris were all about naturally aspirated V8s and V12s, so turbocharging should have meant the dawn of a new era at Maranello. Strangely enough, once production of the two cars stopped, Ferrari went back to naturally aspirated motors for the next 25 years until the California T in 2014 and the 488 GTB in 2015.

If two-and-a-half decades of mulling over things is considered progress, well, then we should thank Ferrari for helping posterise cars like the 355, the Enzo, the 430 Scuderia, the 599 GTO and countless others on the walls of many a young boy’s bedroom (and girl’s, too). However, the 488 GTB is progress and not just to keep boffins at the EU out of Maranello’s coat tails. Stats talk about 661 bhp between 6200 and 8000 rpm and torque at 77 kgm at 3000 rpm from the mid-engined V8. Notice the changes? A lower redline and masses of twisting force at mid-revs. Ferraris were always an antithesis of that thought.

Therefore, you might think that the 488 GTB would be rather different to drive, but as a handrail-grabbing Ruman will attest, it was the easiest and most comfortable when driven hard. On Dubai’s straight sections of road, an on-ramp with a decreasing radius is manna from heaven. Its predecessor, the 458, had infectious levels of grip, but just when you think that was more than enough, the 488 GTB blows it out to sea. Ruman’s protestations were actually bouts of laughter, because his good friend drives an F430 Scuderia in Mumbai (where do we hire such people from?), so his instant remark while I was trying to gauge the amount of traction exiting out of the ramp was, ‘Boy, this thing literally corners  on rails.’

Does that mean the 488 GTB has a little less leeway around corners? Has it lost some of that cheeky handling character for grip, or is there still some Ferrari left in it? To answer those questions, we needed an empty parking lot and lo and behold, not soon after the exit ramp there was just one. Turning the manettino to CT and then ESC off proved just why our fears were unfounded. The balance, grip, steering feedback, weigh in and weigh out was simply spectacular. We had stepped on the automotive equivalent of RDX. And boy, was it proving to be such  a blast!

What Ferrari has done with the 488 vis-a-vis the 458 is what it’s done before to the 430 vis-a-vis the 360 and 355 from the 348. You take a good recipe and perfect it, and then plaster on a new badge and call it ‘new’. The truth is, though, there is more here than in any half-step generation up from the previous experiences. Which takes us back to the turbocharged V8.

Like with the F40, IHI Corporation supplies the turbos, in this case two twin-scroll ones, one for each bank. A lot of work has gone in reducing turbo lag, ensuring higher output, reducing friction and other modifications. As a result, not only is it nearly 100 bhp up on the older 458, it’s significantly higher on torque, too. Getrag continues to provide the 7-speed dual-clutch transmission, arguably one of the best on the planet, but with even faster shift times than before.

To counter the lack of sound, Ferrari’s documentation lists a host of changes, including new longer headers and a flatter crankshaft. As always, tone can always be enhanced at different rpms and Ferrari claim to have done work on even that. Is it, therefore, a happy compromise? If, on a scale of 1 to 100, the 458 were on 91, the 488 GTB probably scores an 84 or 85. It’s loud and chatty as the revs rise, but the unmistakable constriction of sound by using a turbo remains. It’s got the V8 rumble, but it’s a bit muted in the face of some of its competition.

But it’s the turn of pace that stumps your expectations. The response from the turbos is instantaneous, thanks also to the use of a low-density titanium-aluminium alloy called TiAl for the turbines’ bearings. There’s just no let up in torque delivery, aided largely by the crisp-shifting dual clutch that has separate torque settings for gears one to three and four to seven. Approach a corner, lean on the outside tyres and the well-balanced steering offers just the right amount of feedback to let you know that the Pirellis are properly unfazed by the angle or amount of power that the e-diff is sending to the rear wheels. It’s proper dial-in and dial-out stuff with enough texture to let you know that despite the speedo showing 140 kph, you are nowhere close to the edge of the dynamic performance it offers.

Everything in the 488 takes place in hyper time and that also reflects in its straight-line numbers. Three seconds is what it takes to hit 100 kph from a standing start, the run up to 200 kph taking just 8.3 seconds. It’s the second number that blows every single known notion of acceleration away — a good half a second quicker than the 731-bhp F12!

To put all that power in check is the SSC-2 or Side Slip angle Control 2, based on the manic 458 Speciale. Not only does it work by providing more control when the angles of attack get more obtuse, they do so by firming up the front suspension while softening the rear. Around the ramp mentioned earlier, we didn’t want to risk having the nose collect cement and paint. But in the parking lot, there was some opportunity to learn more about it, although with the setting sun and curious onlookers, we didn’t spend more time learning the true depths of its capabilities. But a taste of it was enough; enough to get a sense of what it’d feel like  if we had even an hour around Fiorano.

No Ferrari cockpit is a disappointment and this evolution of what we’ve seen with the 458 and F12 is clearly a step in the right direction. You no longer complain about the indicators on the steering boss — they actually work more seamlessly than the stalks. The information is easy to access on the the three-pod instrument display, but it takes some getting used to with the other controls on the left and right of the steering.

My only gripe with Ferraris, and it continues to manifest itself, is with something as ordinary as the 12-volt socket cover. They never seem to get it right, however inconsequential it might be to a Ferrari; it just leaves a bit of a bad taste in the mouth when you are spending Rs 3.84 crore on one.

But not enough to change your mind about what the 488 GTB is. The 25-year wait for a mid-engined, turbocharged sportscar from Ferrari has been worth it. The 488 really does live up to the long tradition of V8s from Maranello that have always been about a fine balance between handling, traction and that wee bit of lairiness. Closer to the edge, it still has that joyful sense of raggedness, but the build up is gradual and more predictable than before. You tend to live with the fact that it isn’t as evocative as the 458 to look at, but it still very much looks like a Ferrari and drives like one. And that is enough to keep it at the top of its game.