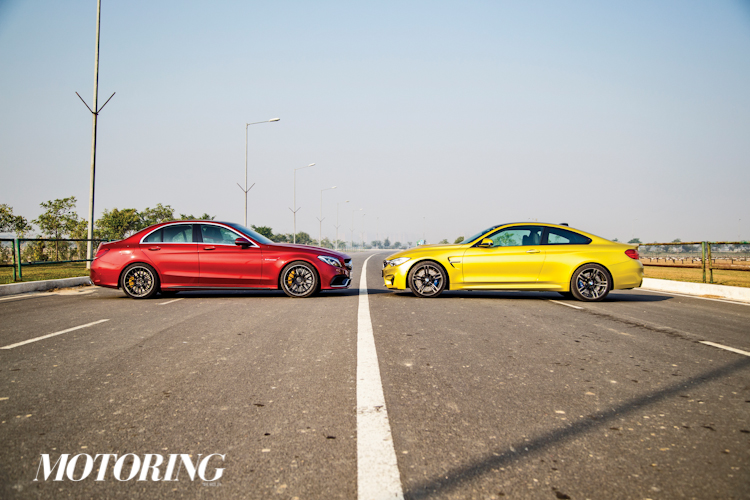 The M3 and now the M4 are twin testimonies to these concepts, except that the M Division has time and again tested the patience of its most ardent followers. First, it went from rear-wheel drive to all-wheel drive and SUVs, all in the same breath. Then, it didn’t even think before swapping manual gearboxes with automatic ones, went with electric steering setups and last but not the least, took the turbocharging route with its motors. One after the other, its hard-fought ethos was diluted for the sake of emissions, dollars and emerging-market customers, although not necessarily in that order.

What’s strange is, AMG never professed to any self-made diktats. Not once was it accused of diluting its core identity, because going fast was at the heart of Aufrecht, Melcher Großaspach. How it achieved it was immaterial. In the process, it made some of the most whacked out, yet memorable motors, too. There was no Waffen SS-like  philosophy to hold it back, simply the imagination of its engineers and at times, its gearboxes.

The truth is, never before in the history of two of the biggest rivals from the respective tuning houses – BMW M3 and the C-Class AMG, has there been a time when both have been turbo-powered. Although the condition where the AMG always tends to make a bit more power continues to weigh in here; the M4’s 424 bhp to the C63 S’ 503 bhp (Mercedes retails a standard C63 in other markets, rated at 476 bhp). Before you weigh in on the fact that it’s not the M3 vs C63, the ideal combination, we were hamfisted by the press M3 awaiting certain parts that threw its availability out of its quad exhausts. Also, the M3 and M4 are only marginally different from each other in real-world behaviour, not enough to alter the verdict of this story. So here we go.

The sharper W204 has made way for the softer, curvier W205 C63 S and while it may not have the spunk of its predecessor, it does have enough to make it stand apart from the regular C-Class. The deep air-dam with the carbon-fibre pieces married to the plasto-chrome accents are a bit overdone, but then the 19-inch wheels also offset the rather curvy profile.

In contrast, the BMW M4 still doesn’t get rid of the power bulge, despite no large airbox to rest under the hood. It’s a sharp-looking car, just like its predecessor and of the two, probably still has the right amount of tone and flair in its lines. There are still typical BMW M traits, like the boot lip spoiler and four exhaust tips, deep-dish wheels and cooling vents on the flanks. This round clearly goes to the BMW, in our books.

It’s wrong to say that either car is over the top or underdone on the inside, but there are considerable differences in their execution. Both of them borrow heavily from their regular fare – the 3 Series and the C-Class to be precise. They also get a fabulous set of front chairs from where the world seems to be beautiful, mostly going sideways. The C63 S gets heated seats, not that you would mostly feel the need, except when it’s bitingly cold, as it did the morning of the shoot. The M4 offers decent room for two back benchers, though its four-door sibling is more practical. The C63’s back bench has good support in most places and offers good legroom too.

As an overall cockpit experience, the M4 is a bit behind the C63 and that has more to do with the fact that current Merc interiors are a leg up on their German competitors. The silver chrome accents offset the carbon-fibre trim on the centre console, while the suede and shiny leather lined steering offers better feel and heft to use. In contrast, the M4’s cockpit feels a bit staid – functional and practical yet somewhat lacking flair. From a driver’s standpoint, though, all major functions are easy to access, including controls to change the different settings for throttle, suspension and steering, with the Merc, though not too difficult either, it feels less thought out. Still in the overall sum of things, the C63 S has that edge over the M4. Who said these competitors give any space?

BMW’s best M3s were always straight-sixes and it realised this while developing the current M3/M4. Taking the 335i motor with identical turbos for each bank, the specific output of the M4 is considerably higher than the C63. Both the M3 and M4 are at least 100 kg lighter than the C63 and that makes up for the loss in horsepower and torque.

Torque is not an issue with the BMW. Pretty much from lift-off, the M4 rides on a torque wave that’s assisted by a rather quick gearbox, both on upshifts and downshifts. No, it’s not yet close to Porsche or Ferrari’s dual-clutch boxes, but placed next to the single wet-clutch torque convertor of the AMG, it’s the best of the lot. The torque wave though means there are fewer spikes in normal driving, making it rather docile in slow-moving conditions and a bit of a handful if you aren’t quick on the brakes. However, once you select Sport or Sport+ is when the M4 transforms into more of a focussed sports coupe, much in the vein of its predecessors. The power delivery becomes much sharper and the spikes in power are more pronounced, thanks largely to the near-7500-rpm redline. Straight-line performance is just a shade under the C63, hitting 100 kph in 4.35 seconds to the C63’s 4.13 seconds. Unlike older M3s where the torque curve would peak off and the progress to higher speeds would become progressively slower, the new motor has none of the letup at higher speeds. No doubt, BMW have a fantastic job of keeping turbo lag to the absolute minimum, but the trouble is, around corners, that same no lag/torque wave combo means you end up recording higher entry speeds and some hesitation during exit. That places your right foot always ready on the brake pedal and that’s not what you want to do in an  M car.

The C63, on the other hand, has two issues to deal with. One, despite placing the turbos in the centre of the V-bank, there is a characteristic lag, some of which is exacerbated by the slower gearbox. It’s a tiny hiccup, but once you get the revs in the meat of the torque band, you enjoy a considerably higher peak output of 71.2 kgm. That puts the mid-range of this 4.0-litre turbo motor in E63 AMG territory! Such is the turn of pace in a straight line that it’s a mere 0.2 seconds off the lower, more aerodynamic and lighter AMG GT S, in the run up to 100 kph making it the performance bargain of the year. Upshifts are a bit slow, downshifts just a tad better, but it’s the sound that places it higher than the M4. More guttural in nature, although no patch on its predecessor, the C63 is a riot to drive, the combination of pace and sound making it a rather intoxicating cocktail. Neither car achieves sound without cheating, though; BMW places speakers on the inside that respond to change in throttle response, while the AMG uses a trick exhaust and a fake right tail-piece.

Grip is key, but grip also has to be predictable and just in the right amount to provide maximum fun. The reason why cars like the M3 and C63 sell in huge numbers is their track to wheelbase ratio, as well as rearward power bias that makes them drift friendly. While the M3 hasn’t deviated from that, it’s the C63 that’s always been a step ahead. Despite the turbo motor, once you have the right gear and right revs, getting it to drift is one of the easiest things to do. The steering may lack feel, but it weighs up decently and the smaller circumference combined with the ideal holding points makes it a proper thrill-a-minute ride.

The major difference between the M4 and M3 is the way the stiffer coupe makes it a better handler and let’s put it this way, it really makes all the difference. Front-axle grip on the M3 has always been its hallmark and dare I say, BMW has this gong firmly in its pocket. The steering is sharper and more precise than the AMG, probably down to the fact that the M division allocates an engineer specifically for steering feel an weigh in. Not that it’s anywhere close to the hydraulic setup of the two-generations old E46 in terms of feedback, but it’s much easier to predict what the front axle will do if you keep traction control untouched. The ride too is a bit firmer on the M4 even in the comfort setting, but overall pliancy through the settings is better on it. The C63 can be a bit bumpy in comparison at low speeds or on roads with mild camber changes. All of this we never quite got to experience around a track, but our guess is that the M4’s lack of horsepower would well and truly get made up by its sharper dynamics around a tight track, making it the weapon of choice.

There is no straight way of saying this, but if you are looking at a driving experience objectively, the M4 takes this round. It’s sharper, more precise, more predictable and better rounded. Would the outcome have changed if it were the M3? I doubt it. However, the C63 S isn’t too far off. It’s a much sharper car than its predecessor and has really raised the bar for itself. More importantly, when placed next to the M3 or M4, it tends to put a smile on your face in a manner that neither Bee Em is capable of. It also punches far above its weight, taking more powerful performance cars to the cleaners. Besides it’s a more emotional experience, something that’s gone missing from the M3/M4. And that matters. A lot.