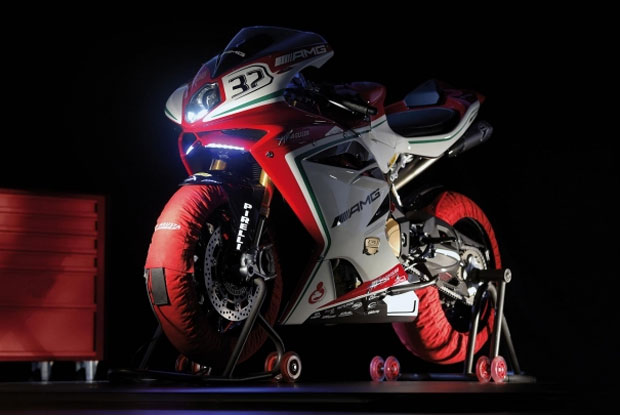 You know what motorcycle we would all like to have in our garage even if it were to just to stare at it all day long? The MV Agusta F4. Last year MV debuted the F4 in WSBK and this year they’ve gone ahead and decided to sell that same bike to the masses, well sort of, by making 250 MV Agusta F4 RCs. The RCs are race replicas that are running some really trick bits and making enough power to scare you s***less.

What are the trick bits? A lightened crank, redesigned cylinder head, larger fuel injectors, lighter pistons, titanium conrods, titanium bolts, lightened gearbox, magnesium covers, lithium ion battery, carbon fibre fairing bits, top-spec Ohlins fork and shock and forged wheels. Phew! The four cylinder motor makes 205 bhp out of the box which makes it the most powerful production superbike in the world (yes it’s more powerful than the Ducati Panigale 1129, the BMW S1000RR and the Aprilia RSV4 RR). But then, MV is also giving customers a neat little box with the bike. This box houses a full race exhaust, a race ECU, carbon fibre seat cover and aluminium mirror caps. The ECU and exhaust takes the output up to 212 bhp and over 11 kgm of torque! You may pick up your jaws from the floor now.

If you want one, hurry up and get hold of roughly Rs 29 lakh and make a call to Italy. Only 250 will ever be made, as we said before.