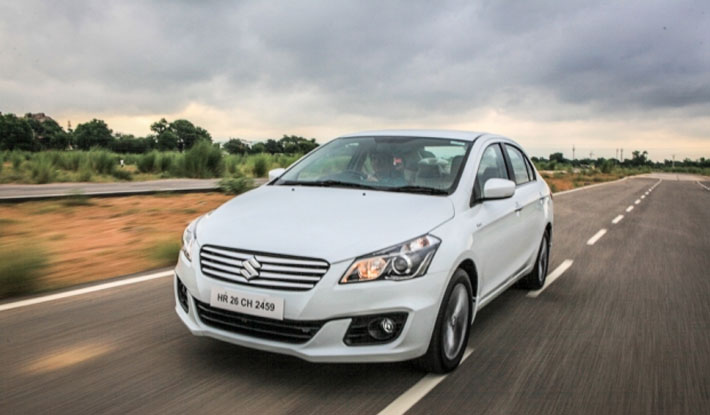 Maruti Suzuki has had a very busy 18 months. They have gone from slipping down the charts to arresting it and staging a return to form. To many, this may have gone unnoticed, but at one point, Maruti Suzuki was dangerously close to finding its marketshare slipping much below 38 per cent. Alarm bells rang in New Delhi and Japan and let’s just put it, in short, corrective measures were taken.

But while all of that has been done, awards conferred and bonuses handed out, the fact remains, Maruti’s management still has a task at hand – taking Maruti premium. Hyundai, Honda and the rest have managed, in recent years to capture that turf and in a market, whose average spend on car purchases has been steadily rising, Maruti Suzuki can ill-afford to be seen as just a mass manufacturer of cars.

Enter the Ciaz. Maruti’s first attempt at getting the upper-end of the A3 or C-segment in its grasp. For a firm that has struggled to find success here, the Ciaz is a very good attempt. Under development for 48 months, the Ciaz is based on an all-new platform that Maruti boffins are not keen to discuss, nor are they hinting at further body styles. It’s also quite light – weighing just 1010 kg for the petrol and 1105 kg for the diesel, kerb. About 25 per cent of the car uses high-tensile, lightweight steel, with the body-in-white (BIW) nearly 55 kg lighter than the outgoing SX4.

It also sits lower than its predecessor. With a ground clearance of 170 mm against 190 plus mm and overall height dropping from 1560 mm to 1480 mm. And if the BIW weight difference is 55 kg, the actual kerb weight is down by nearly 180-190 kg. Beat that!

And as far as looks go, Maruti Suzuki has not only gotten rid of the crossover stance, it’s made a somewhat mini-Kizashi from some angles. The Ciaz is a well-proportioned car with a lot of ingredients that customers in this segment want. It’s long – at 4.49 metres it’s the second longest car in its segment after the Linea. But it has a wheelbase of 2.65 m, the longest by far. What it means is, not only does it look long and (he means more metal for your money – Editor), it’s also spacious on the inside. The eagle-eyed headlamps and the lower, floating chin for the air-dam give its some USPs, although some will find the tail lamps rather familiar.
On the inside, the Ciaz boasts of far better build quality and materials than the SX4. Gone are some of the rough edges and grainy plastics of the SX4, and in comes polished plasto-wood (for the lack of a better term), nicely rounded edges and white backlit instruments. It’s also pretty spacious, with very good shoulder and legroom up front and excellent knee room, legroom and shoulder room at the rear. There’s just a slight lack of under thigh support and fixed headrests at the rear, something that may or may not break the deal, depending on how you prefer it. We quite liked the instrumentation, the touch screen is more intuitive than on some others and the climate control system chills you, down to your bone.
There are lots of features too. Rear seat occupants get AC vents, projector headlamps are standard across all four trims, alloy-wheels are offered on Z trims, the audio unit boasts of Bluetooth and USB capability on the V+, Z and Z+trims, while the Z+ gets a reversing camera and sensors linked to the 7-inch touchscreen. Customers will get to choose between fabric, leather and part-fabric/part-leather interiors, seven exterior colour options and of course two motor options as well.
The 1.4-litre petrol and the 1.3-litre DDiS turbodiesel aren’t new to anyone. But there are changes. The petrol gets a new head, a higher compression ratio, a different intake, new pistons and other changes to improve thermal efficiency and reduce frictional losses further. Power out may be a modest 91 bhp@6000 rpm, with torque at 13.1 kgm@4000 rpm, but it’s the really low kerb weight that makes the whole package seem more than adequate. Mated to a five-speed manual or a four-speed auto (same as the one on the Ertiga, export version), the 1.4 petrol doesn’t seem to be lacking in cubes or, for that matter, enthusiasm.

Give the motor some stick and it responds neatly, more like a 1.5 or 1.6-litre motor. The power-to-weight and torque-to-weight ratios are pretty good for a car in that class, nearly dispensing off with the adage, ‘there’s no replacement for displacement’. Nearly because, post 5,000 rpm in higher gears, progress is a touch slow. The gear throws are also not as slick as, say on the Swift. But the motor pulls cleanly off 1,000 rpm in fifth gear, the speedo hovering at 40 kph. Thankfully, Maruti have also added a dead pedal, so that makes cruising less of a chore. We slapped on our test gear and the Ciaz petrol did a 12.4 second run to 100 kph, which isn’t earth shattering, but not too bad for itself. Considering it delivers an ARAI best of 20.71 kpl, some may find the performance more than enough for the job.
It’s the diesel that bolsters your faith in the Ciaz. It may take a mite less, 11.9 seconds to 100 kph, but the motor is refined, the gear shifts are better and the steering feels better weighted. Weight doesn’t mean feedback, but it’s at least more reassuring. NVH levels are pretty well controlled, with wind and tyre noise well-controlled, once you are in three-digit figures. The turbo doesn’t kick until nearly 2000 rpm, but the gear ratios are so smartly selected that you don’t necessarily feel that progress is hampered until it comes into play. This was true of even the SX4, but in the lighter Ciaz, it’s far more amplified.
We drove on arrow-straight roads and that meant there was no accurate way of gauging how the car handles, but on some fast corners, it seemed to hold its line well. High-speed stability is extremely good, but what matters to most is the ride. It’s a bit firmer in the petrol and softer on the diesel. We quite like the general rebound characteristics, but we’ll reserve final comment until we test it thoroughly. Brakes seem just right for the job with some pedal feel thrown in for measure.
So is the Ciaz, a worthy contender to the City? Let’s put it this way, it’s better put together, with nearly similar levels of kit and space and is a touch more efficient too (the diesel at 26.21 kpl is the most fuel-efficient car in India, for now). While the City may have its aura and fans, Maruti is keen to upset that equation. And on first glance, they have the right ammunition for the job.