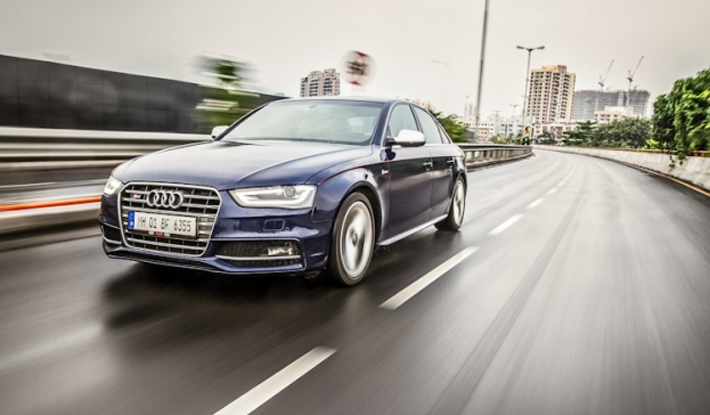 ‘How on earth am I supposed to compare these two?’ One’s a furious inline-four, the other a glorious, supercharged V6. The red corner’s down 1004cc on the blue, yet it’s up 28 bhp and 1.1 kgm. Both come from their respective go-faster tuning departments, yet one looks the part and the other is content being a sleeper. Similarities don’t come hard and fast between Mercedes’ CLA 45 AMG and Audi’s S4, yet there was a compelling reason to line these two up.
Together, in India, they currently represent the most modern and affordable (I’ll refrain from using ‘cheapest’) access points into big-boy power figures and bar-night bragging rights. Think of these two as the small fish in a big pond — except these two could just as easily swallow you whole and spit you out if mishandled and taken for granted.

The S4 is the antithesis to the CLA 45 AMG, if ever there was one — there’s very little to tell this car apart from its relatively pedestrian sibling. Without getting too much into detail, it’s safe to say the S4 does one hell of a job of masking the potential it’s got under the hood. Super comfortable seats, especially in comparison to the AMG, and a rather well put-together cabin complement the S4’s somewhat sombre exterior pretty well — a drastic departure from the CLA 45.
The essence of this story, however, lies not within the cabin or in how these cars look. As you might have guessed, it’s what’s under the hood that counts.

What I can describe is the way these cars ride and handle, and herein lies the real differentiator. Spend enough time in both and it’s clear that the CLA 45 prides itself on being the more track-focussed of the two. It begs you to push harder and faster pretty much all the time, the 4MATIC all-wheel drive assisting you through and through. Even at higher speeds, it’s got the kind of poise that really instills a supreme sense of confidence, and that steering weighs up just perfectly as the needle starts to climb. Need a car that makes you look a lot better as a driver? The CLA 45 is a safe bet.
That, however, isn’t to say that the S4 is willing to roll over and let the CLA 45 take all the credit in this department. It’s just that, in comparison, it feels a lot more docile, a lot easier to drive. The suspension, for instance, is set up in such a way that you’re comfortable the whole while, which is way more than what you can say about the CLA 45. You feel at ease in the S4, and as a result, pushing it right to its limit seems secondary, almost unnecessary.

Audi’s quattro works sublimely well, but it starts to wash out a bit as you reach the ragged edge. The pick of the two would be the CLA 45 if you’re keen on some corner carving, surely.
Where the Audi does pick up more points is with its seven-speed dual clutch transmission, which is a lot more eager and instantaneous with its gear changes. The CLA 45, too, makes do with a seven-speed auto, but it’s just not as quick as you’d like it to be.