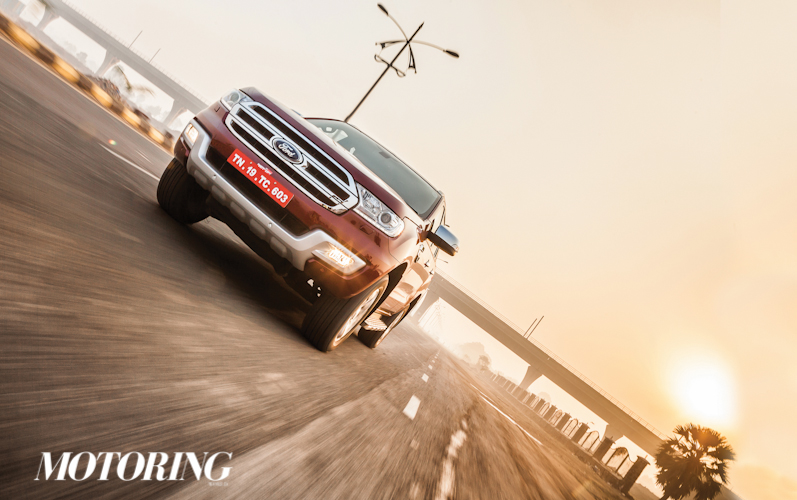 There’s something about flawed cars and character. The Ford Endeavour was one of them. My first experience with the original number was for a comparison shoot with the then Tata Safari Dicor 3.0 and the Mahindra Scorpio 2.6 CRDe. In what seemed like exalted ‘common-rail diesel’ company, the Ford Endeavour’s 111-bhp, 2.5-litre turbo diesel seemed to be running out of ideas, but that wasn’t quite the case. It comfortably placed the Safari dead last, while settling for second place, its price tag dragging it away from the top spot. It handled well and felt better put together than its Indian rivals, but wasn’t quite perfect. It never felt comfy on the inside, the plastics didn’t feel rich enough and the rear leaf springs made the vehicle buck all over the place, never quite settling on most road surfaces here.

In the past 13 years, we’ve experienced all iterations of the Endeavour. The common-rail 2.5-litre diesel on the second-generation one, then the 3.0-litre diesel with a manual transmission and later, the 2.5-litre 4×2 and the 3.0-litre 4×4 auto on the facelifted version. The performance got better, the handling was still okay, but it rolled, pitched, dived and was never comfy on the inside. So while its features improved, and it leapt out of Motoring covers one Slush Fest after another, it never really gave the Toyota Fortuner food for thought, which ran away on the sales charts and has held strong ever since. Ford has tried, but the attempts have been half hearted. It’s been a bit like how shawarma is prepared in India — you have the equipment and the recipe in place, but it gets killed by the choice of sauces. Ford admitted its shortcomings, so when the third generation Endeavour for India got underway, it seemed to look way ahead and pre-empt the competition. This is its story.

HAS IT LOST ITS BUTCH CHARACTER?
If Rambo were produced today, a lithe and agile special-ops assassin would probably be the image Hollywood studio execs would have in their mind. By that same yardstick, the Endeavour needed to be relevant deep into the 21st century and the new one doesn’t disappoint. The trapezoidal chrome grille, LED-lined headlamps, the faux vents on the front wings, the chrome strip that joins the Renault Koleos-esque horizontal tail-lamps are new to the Endeavour’s design language. Of course, not everything is a hit — the large wheel arches make the 18-inch wheels feel a bit small, though that also means lots of wheel travel when going off the road. Ford has really done a good job in marrying the hard wrought new-age design elements with its muscular avatar.

IS IT FLASHY ON THE INSIDE?
You would be hard-pressed to think that the interiors of the Endeavour aren’t straight out of something much higher up the food chain. The use of faux-carbon and metal on the dashboard, with beige and leather-like inserts with double stitching is a coming together of materials that’s generally found on more expensive machinery. The entire layout is a complete departure from its erstwhile iteration and thankfully so, at that. Gone are the  plasticky rotary controls for the air-con, replaced by a button-festooned layout for the auto-climate control. A traditional handbrake for the push-pull type is a welcome addition, while electric controls for the driver’s seat offer a wider degree of adjustability. Ambient lighting options, a multi-function TFT screen in the instrument binnacle, a large touchscreen for infotainment, chrome-lined cupholders — there really is a lot going on up front. A new 4×4 unit with selectable driving modes, not unlike the one found on a Land Rover or Mercedes-Benz SUV, can be accessed via a rotary knob on the central tunnel.

The second row is where things have taken a quantum leap forward. Despite being a body-on-ladder chassis, gone is the raised floor and what you get now is more comfortable seating with enough thigh support. The access to the third row requires a bit of manoeuvring, but it’s far better than before, with two small adults making their way in comfortably. Boot access is now via the touch of a button, a first for a car in this segment, while the 4×4 version also gets electrically foldable seats for the third row that liberates acres of luggage room.

THOSE POWERTRAINS — ANY GOOD?
Ford’s two powertrain options, the 2.2-litre and 3.2-litre Duratorq are new to Ford India, but the blocks have been around in circulation for a few years now in international markets. The 2.2’s antecedents go back to the Land Rover Freelander that’s still doing duty in the Discovery Sport, Evoque and XF among others. The 3.2 is the larger, more powerful and torquier version that replaces the 3.0-litre. Both motors with their 6-speed autos were put to test, though a manual transmission with the smaller motor should be on offer.

The 6-speed autos have seen some change in tuning from the time we first drove them in Thailand a few months ago. They still aren’t the quickest shifting gearboxes around — the upshifts are lazy and the downshifts are marginally better, but still some way off from gearboxes found in SUVs like the Hyundai Santa Fe. Yet, it’s no deal breaker. The good thing is despite all that, they aren’t slow SUVs. Off the line, the 2.2 feels a bit slow to respond at first, but the 38.2 kgm of peak torque from 1600 to 2500 rpm makes in-gear acceleration pretty good. A time of 13.3 seconds to 100 kph isn’t bad either, while the 80-120 kph time of 9.5 seconds is right in line with some entry D-segment sedans. For a 2.3-tonne vehicle, the numbers are pretty strong. The performance is strong till about 140-145 kph and then peters off to finally top out at 175 kph.

With the five-cylinder-inline 3.2 motor, things are quicker. The near-200 bhp/48 kgm figures place it a shade above 11 seconds in the run to 100 kph and while it may appear slow at first, the performance is deceptive. Mid-range grunt is rather strong, allowing you to plough through slow-moving traffic or simply ford a path through rough terrain. We never quite got a chance to check the top speed, though we’d hazard a number upwards of 185 kph. Sure, the overall performance is strong, but what puts it in better light is how it really does on the dynamic front.

CAN IT OUTHANDLE A FOCUS RS?
Hah! Not anytime soon, but the package is very well sorted. In fact, it’s so well sorted that you would be hard-pressed to think that it’s a body-on-ladder SUV. For starters, the NVH insulation is probably leaps and bounds better than any of its competition and probably even better than some monocoque offerings, too. While we don’t use decibel meters to measure sound, we think it’s good enough to match or even better some of the more luxurious offerings in the market. Even when you use the tiptronic gearbox and start hitting the redline, there is just an incremental increase in cabin sound.

The Endeavour’s ride quality is yet another impressive trait. Compliancy is so good that most bad stretches can be taken at higher speeds than usual, the occupants barely getting a sense of the undulations. Low-speed and high-speed ride is pretty well sorted; only, the higher wheel travel makes the car roll a bit, but it’s acceptable by body-on-ladder standards. There is still some of the roll, pitch and dive, but it never quite gets out of hand. However, the brakes feel a touch too sensitive and take some getting used to. The electric steering weighs up nicely and is accurate at what it does. Overall body control is exactly what you would expect from a Ford, but it takes the game quite ahead in this regard.
The 4×4 version with its varied off-road settings really offer serious depth to the Endeavour’s off-road ability. We never quite put them through the test (just wait until the next Slush Fest!), but it offers a degree of flexibility for novice offroaders that no other vehicle in its class currently offers.

DOES IT HAVE WHAT IT TAKES TO BE A LEADER?
The Endeavour was always a tough, no-nonsense premium SUV that now justifies the ‘premium’ tag. Its truck antecedents are more or less a thing of the past — it really does feel even less like a Ranger with a full-body cab, something its predecessors found hard to shake off. It’s got lovely interior touches, good space management, strong motors, very good NVH and a general sense of being a well thought out and finished machine. For Rs 24.39 lakh for the 4×2 Auto and Rs 26.54 lakh for the 4×4 Auto, it’s a pretty enticing package, all right. So, until the new Toyota Fortuner, its perennial pain in the you-know-where arrives, it’s got everything to be a segment leader.