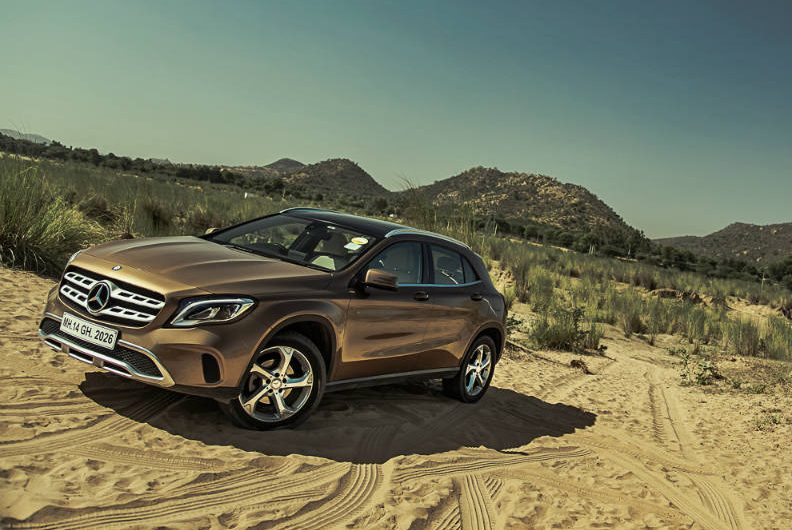 Mercedes-Benz has been coming out with some fantastic SUVs of late. They look the part, offer the goodies and are selling well, too. The GLA, its entry-level SUV since its launch has been on a slightly sticky wicket. Some thought it didn’t have the presence, some didn’t find it value for money and some just outright disliked the diesel engine. Well, Mercedes isn’t giving up so easily and has made some changes which I think are in the right direction. 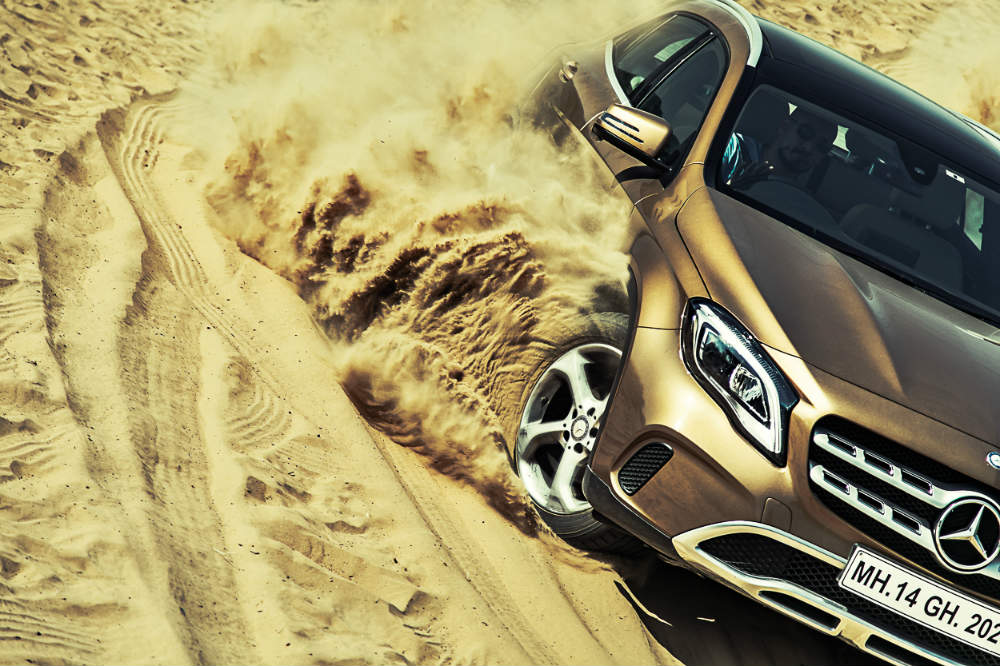 The biggest impact of this mild facelift is that the GLA looks more a part of the Mercedes SUV family now. Thanks to the redesigned front and rear bumpers, there is more of an SUV stance as compared to the hatchback-on-stilts look it had earlier. The skid plate with a bucket tooth design, the chrome in the front bumper and the ‘Powerdomes’ (as Mercedes likes to call them) on the bonnet do give the GLA a more muscular look. The bi-xenon headlamps have been replaced by LEDs across the range and it adds to the look for sure. The rear tail lamps are also LED, completing the list of exterior changes.

There are no changes in the choice of engines on the GLA, but I think the most significant complaint on that front was addressed when Mercedes introduced the 170 bhp diesel a while back. The 2.0-litre petrol and the 2.1-litre diesel both are enough for a car this size. I drove the 220d variant, which makes 170 bhp and 35 kgm and I have to say it does not feel underpowered at all, keeping the size of the car in mind. The 7-speed dual clutch gearbox mated to this motor does its job well too.

Among the other major changes are the 4Matic as standard on the 220d variant and the improvement in suspension. The ride is much less bouncy than what it was, though it is still a bit stiff. Something I don’t mind at all, but passengers in the rear may feel it on longer drives. The 4Matic comes with Downhill Speed Regulation (DSR), where you can set the speed between 4-18 kph. There are four driving modes — Eco, Individual, Off-Road and Dynamic. Dynamic is still the best for spirited driving, though the diesel motor does get a bit noisy over 3000 rpm. The 183 mm ground clearance, which is unchanged, should be a big plus in case you ever want to take it off the road. 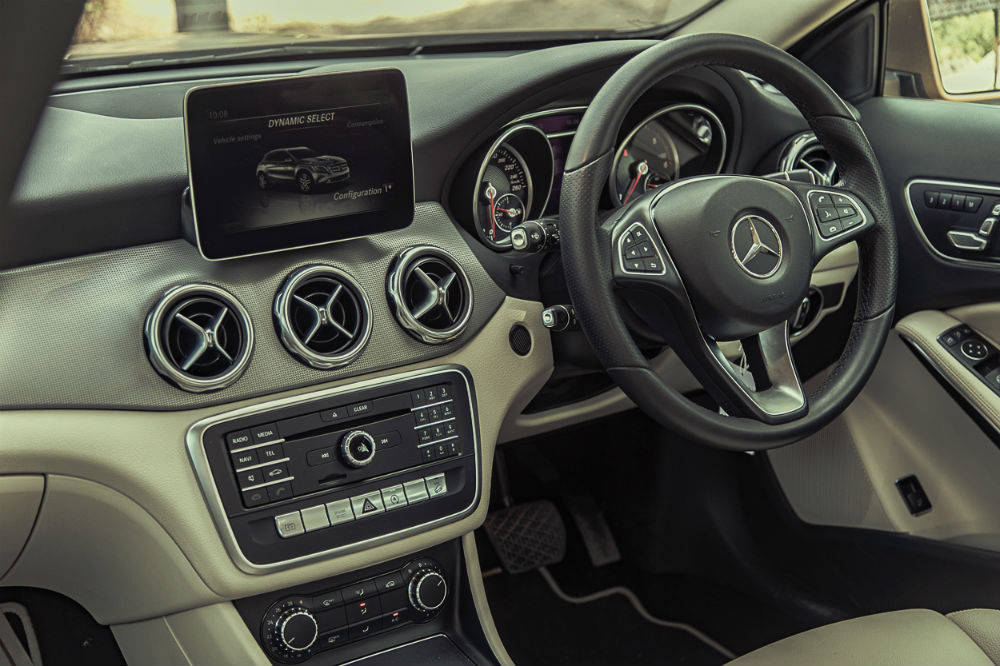 On the inside, the changes are minimal again. There is a new instrument panel, which looks quite neat with the red needles, and a new ambient lighting system with 12 colours to choose from. Apart from that, it’s mostly the same, more so because the GLA has always been a well-equipped car on the inside. There is a panoramic sunroof, electric front seats with memory function, reverse camera, electric tail-gate and an 8-inch infotainment screen with Android Auto and Apple CarPlay. Still no touchscreen, though. 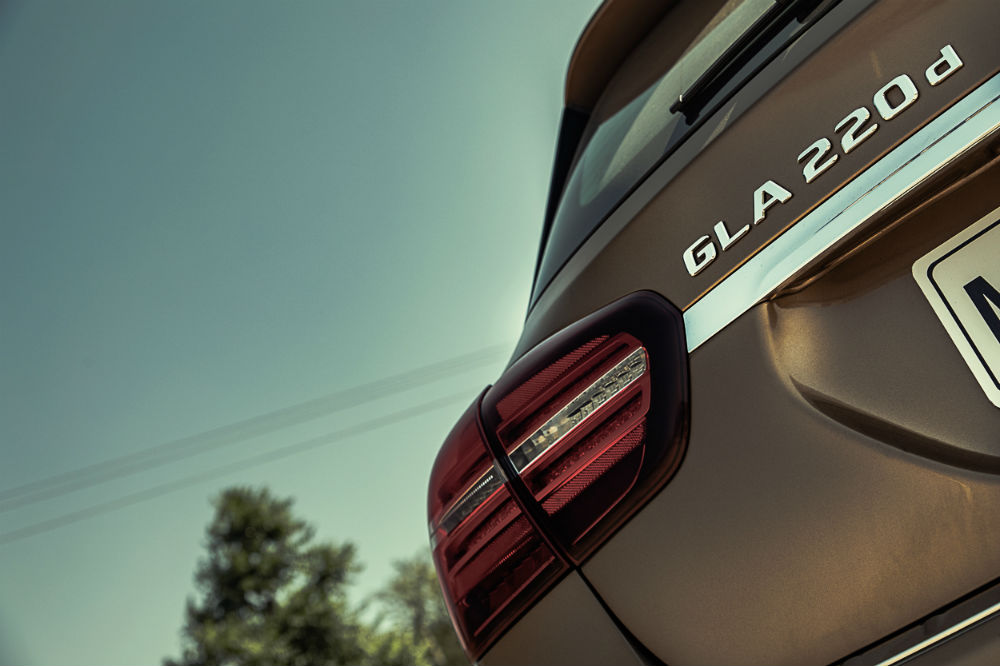 This facelift does give the GLA a slight leg up in the compact luxury SUV segment — it looks more like an SUV now and gets four-wheel drive now. The GLA will appeal strongly to urban buyers who want luxury and ground clearance, without the hassles of a owning a big SUV in the city. Will it be enough to lure buyers from the BMW X1 and Audi Q3? I think for that the GLA needs a major facelift.

You can have a look at more photos of the 2017 Mercedes-Benz GLA in our gallery here.