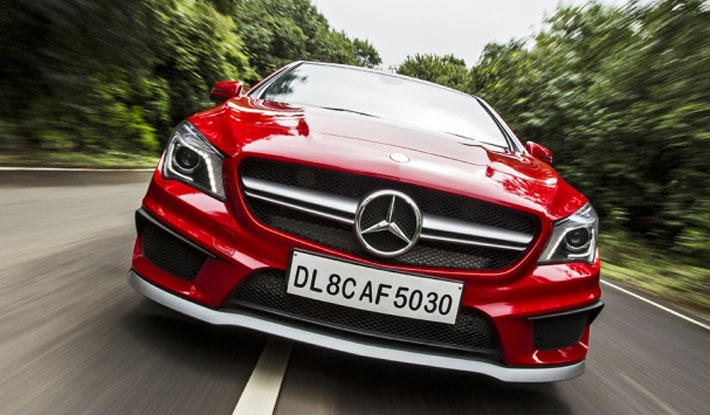 It’s an intriguing era we live in isn’t it? A little more than a decade ago, most of the cars we
revered were enshrined within a one-dimensional casing. Enter some pistol packing, wholly owned
tuning divisions, armed to the teeth with carbon-fibre twin turbochargers holstered to their hips. Extreme Makeover for the four-wheeled kind, if you will. The setting did seem a bit reality TVish. Take a homespun, domesticated carrier of men , give it fireforged musculature, turbocharge its loins, then stand back and weep with silent pride. And fear.

AMG has tirelessly attempted to add a ‘rock’ before the Star, their latest pet project being the Mercedes-Benz CLA 45 AMG, a jumbled assortment of letters and numbers which translate into the most powerful four-cylinder turbo engine the world has ever seen. Merc felt that it was time that such godly power was bequeathed to its more humble denominations. The famous musician Sting used to be a high school teacher y’know? And the CLA purports to be one of Merc’s more austere entry-level offerings. However this time Merc, in completely unteutonic fashion, has gone ahead and unleashed Mr Hyde in India before introducing us to the more sedate CLA 250. I believe Mercedes wants to make a point here, and it’s that there is nothing quite like the CLA 45 AMG around.

Let’s start with the engine. That twin turbocharged 2.0 litre, four-pot engine is one power hungry
hooligan step on the throttle and the sedan aspects are crushed under the weight of the AMG power bank. It’s not just the fact that it deploys 355 bhp at 6000 rpm, its how ample those figures
feel when you’re on expressways it’s never outdone by the significantly more powerful sports sedans in terms of acceleration since AMG’s are never insulate their delivery of speed. Using launch control in the wet, the car was doing a 100 kph in 4.8 seconds. Boy are the sports coupes in trouble.

The seven-speed dual clutch automatic handles the 45 kgm of torque on this thing. While the car is predominantly front-wheel driven, the 4Matic system does transfer power to the rear wheels whenever it senses discord. The steering however is sharp, tactile and precise, possibly to counter any possible understeer but mostly because hair trigger reflexes are a good thing with something so compact and power dense.

And then there’s the way this thing looks. Yes, there’s enough of the CLS and the A-Class and all that but what you should truly appreciate is the swashbuckling draftsmanship that has created this form is quite a departure from the Mercs of yesteryear which had more right angles on them than David Coulthard’s jaw.

On the whole the CLA is an intriguing proposition. Hot hatch like fun with the refinement of a Mercedes. But given that it would be priced over Rs 70 lakh, it might be a bit too novel an idea for the young and the restless. Despite being a baby AMG, Merc hasn’t done much to make it benign in any way. If the World cup wasn’t a strong indicator of German supremacy this compact little hellion certainly is.