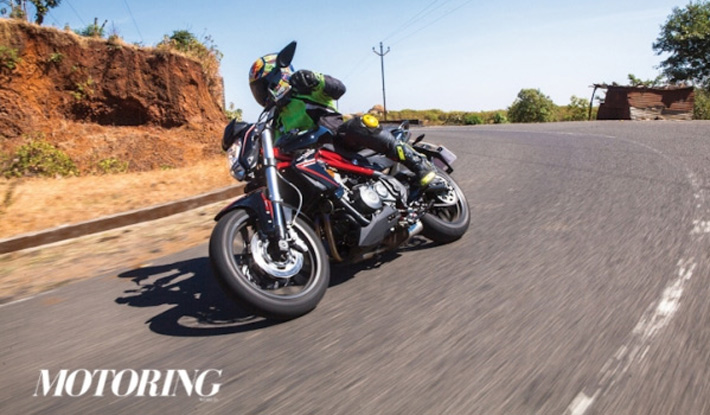 The essence of a culture is often to be found in the art it produces. The hands that paint, sculpt or play contain in them the distilled soul of the land. After riding the new Benelli TNT 300, I wonder what they’re feeding them in Italy. I’ve often waxed eloquent about Italian motorcycles. Any person with their hearts in the right place (on two wheels) is bound to, at some point. But how can even those Italians make a relatively humble 300cc parallel twin sound like this?!

What is a deep burble at idle turns into a throaty growl at low revs, before changing into a thrilling howl in its mid-range all the way to its 11,000-rpm redline. The motor is smooth and composed, no matter what throttle position my blundering hand attacks it with. No matter what I ask it to do, the answer is always a soulful ‘YES!’ from the parallel-twin acoustic masterpiece. It makes me forget about trivial things like speed. Heck, for a few moments, I even forget where I’m headed. I didn’t know a 300cc bike could do this to me. Now I do.

That stirring sound is to be expected, I suppose. The TNT 300 sounds exactly like half an inline-four — which it is. This motor is derived from the bigger BN 600’s inline-four that’s quite the aural bliss on its own. To clear the confusion, the bike you see here is known elsewhere as the BN 302. Seeing how sterile that name sounds, I’m glad DSK-Benelli chose to give this bike a name that does its voice justice. The motor makes a shade less than 38 bhp and the bike weighs 180 kg. So, if you’re wondering, as I was, yes, the 43-bhp, 139-kg KTM 390 Duke whips it effortlessly in a straight line and everywhere else. But for once, I don’t care.

Once in a while, I come across motorcycles that can be termed two-wheeled epiphanies, motorcycles that open my prejudiced eyes wide. The TNT 300, if you haven’t figured out already, is one such bike. I used to think that no small-displacement bike can make music out of the process of internal combustion (actually, Ducati hasn’t figured out how to do it with big cubes, either). Small bikes are good for their light weight (the TNT is not) and ease of getting around (which it is), and that’s about it. But then, the Italians clearly disagree with me. Thank God for that.

Every time I try to think of what the suspension is doing under me or how the tyres feel, I hear the howl echoing off the hills, and I’m immediately distracted by it. The underslung exhaust digs violently into a right-hander at almost full lean, nearly pivoting me off the road. I don’t notice it because I’m too busy listening to what the TNT has to say. So I wind the throttle open again. Everything on this bike works well, so I can happily chase the sound along the road.

The Pirelli Angel GT tyres let me take that howl from one sidewall to the other without any drama. The twin 260mm discs at the front prevent me from screaming into a wall or off a cliff. I don’t feel as connected to the road as on a 390 Duke, but in return, I get ride quality that is soothing for my perpetually aching back. The bike might weigh 180 kg, but on the move it seems to be as light as a howling mist, rolling along among the hills.

As I play around with that throttle, tuning the motor to the whims and fancies of the road, I do realise how flexible it is, even though the real fun begins post-6000 rpm. The speedo reads ‘60’, ‘70’ and then ‘80’, and I’m wondering why there’s a mismatch between the LCD screen and the cold air rushing into my helmet. Later, a careful glance at the units of speed reveals tiny letters that say ‘mph’. Okay, then. Not that slow, after all. Happens to all of us at some point, I suppose.
At this point, I decide to see what the TNT can do when it’s pushed hard. Turns out, it just tightens up and goes. It’s equally happy going fast, slow and everything in between. There is this unstressed quality to the bike that puts you at ease, and that’s something everyone appreciates. I can see myself riding this bike every day around town and on the highway. It’s an entry level Benelli, but that doesn’t mean that it feels cheap.

Actually, the switchgear does feel cheap, but everything else — the cycle parts, the bodywork and the motor feels strong and ready to take abuse for years. And that’s something I’ve noticed on every Benelli I’ve ridden so far. Good to see they didn’t skimp on this smaller bike. What I don’t care too much for — and this is probably a first for me when it comes to Italian bikes — are the looks.

At least to me, the TNT 300 doesn’t look as eventful as it sounds. Perhaps it’ll look good in traditional Benelli green and silver. Perhaps Benelli only had so much MONEY and they spent it where it mattered. After making motorcycles since 1911, I suppose they’ve got their priorities sorted.

This bike, then, is no destroyer of worlds. But it does make the world a better place to live in. It’s not about going at the speed of sound, but becoming one with the sound. The TNT 300 has a charm that isn’t superficial; it’s one that runs all the way to its bones. It’s not the fastest or the prettiest, and it probably won’t be the best deal around, either. But ride the TNT 300, and you will appreciate how it puts its soul on proud display. In fact, I dare you to ride it and not want it.

Perhaps it’s that I didn’t expect the TNT 300 to be as good as it is. Perhaps it’s that I went to it thinking, ‘Here’s another bike no one’s going to buy. Let’s get this over with. After all, small-displacement parallel twins in India come with stupid price tags.’ Perhaps I didn’t anticipate that the TNT 300 would strike such a resonant chord in my heart. Perhaps I should defer that new-bike purchase until its price is out. For now, all I know is that my hand has never hesitated this much while turning the key off. Isn’t that what motorcycling is all about?