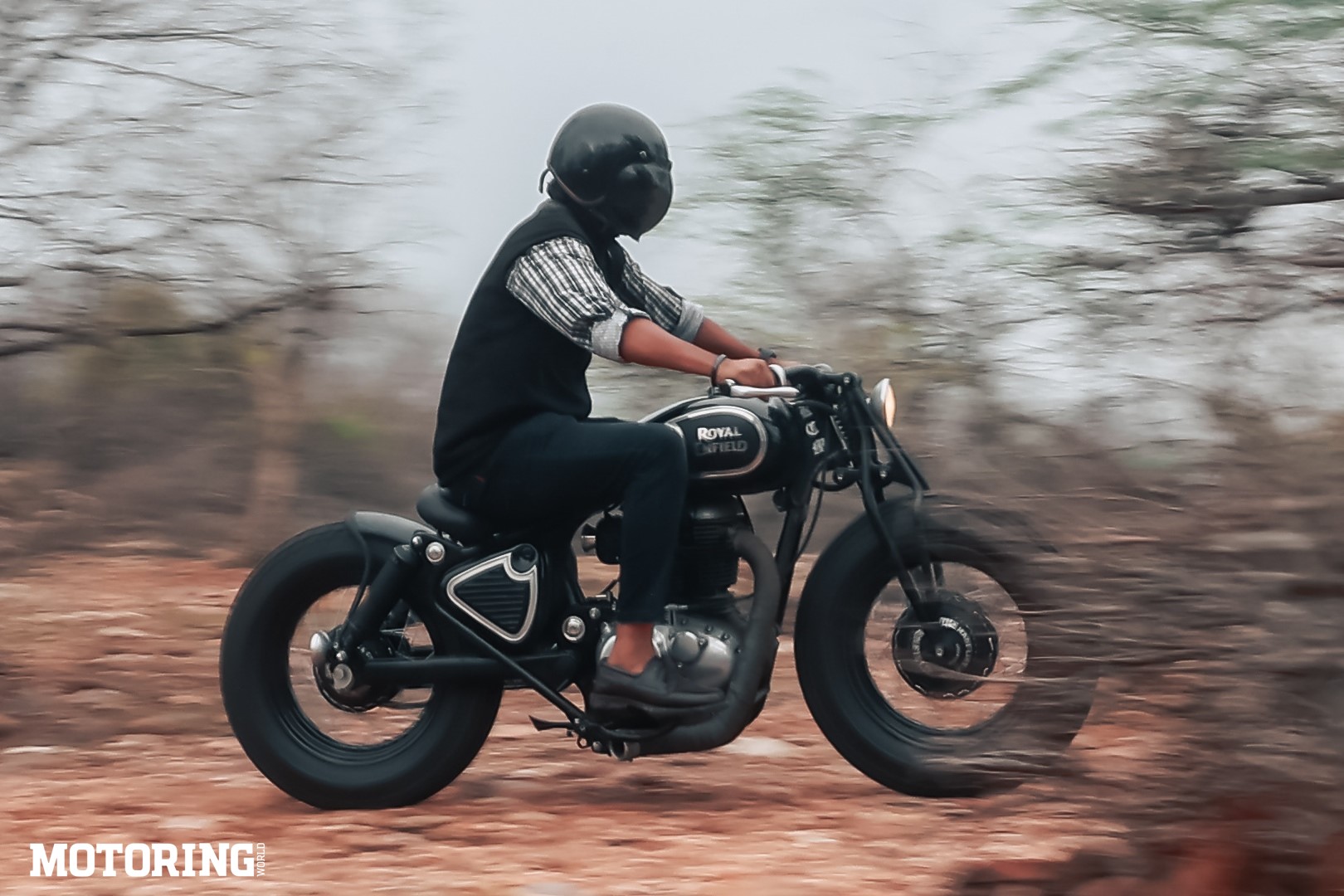 Okay, allow us to start off with an unlikely declaration — our long-term Classic 350 is so glorious in its red-and-chrome finery, we wouldn’t change a thing. Then again, ‘fear’ is not really a word that crosses the minds of custom-bike builders. Instead, they’re likely to be words like ‘bold’, ‘imagination’ and ‘tradition’. More so, in this particular context that sees two Classics turned into veritable works of art. 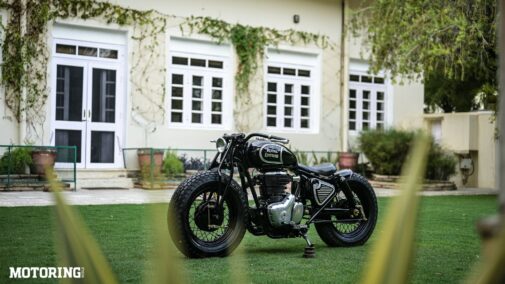 RAJPUTANA CUSTOMS: GAUR
Rajputana Customs needs no real introduction these days. Ever since founder Vijay Singh Ajairajpura built the Thunderbird 350-based ‘Original Gangster’ in 2010, the Jaipur-based outfit has become a force of two-wheeled creativity that’s been matched by few and exceeded by none. An innate pride of Rajput heritage and tradition are on display with the Gaur, the name itself taken from the bison that roams Indian forests. The motorcycle, though, is far more ornate than its wild bovine namesake. 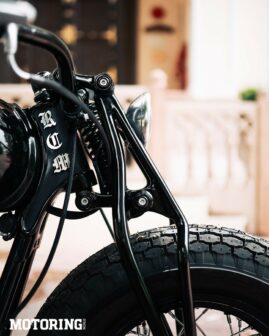 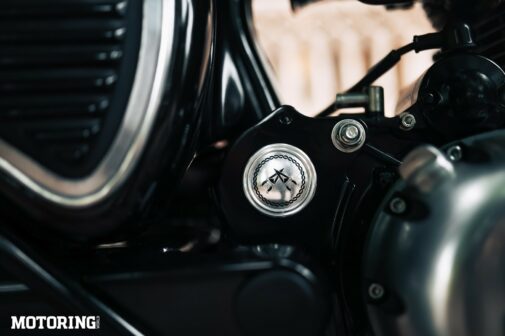 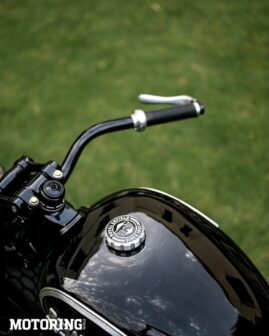 Built to reflect the ‘timeless classic’ aspect of Royal Enfield, the Gaur’s handbuilt parts take inspiration from RE motorcycles of different eras, none of which are recent. The girder fork and drum brakes prove that particular point quite well. The inverted hand levers, the hand-stitched leather seat, the velocity stack and the enclosed rear shock absorbers are more period details that further reinforce the fact that the Gaur was imagined in a rather sepia-toned frame of mind. But it’s not just about recreating the past for the sake of it. 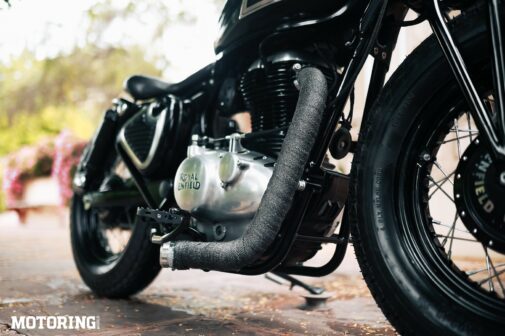 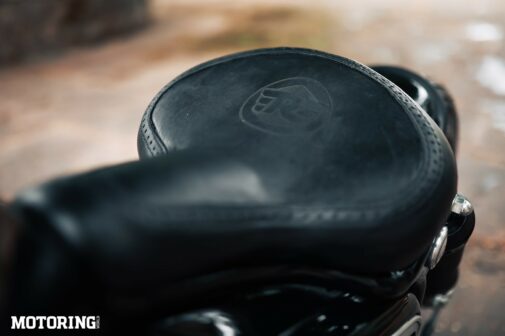 The use of layered aluminium on the fuel tank, the tool boxes and the brake drums reflects nothing but traditional craftsmanship. And the minimalistic headlamp and tail-lamp are almost non-existent in profile, giving the Gaur a look of old-school simplicity. Oh, and of course, the massive tyres help the Gaur achieve a stance that suggests it can execute a stampede all by itself. It almost takes a while to realise that the engine, painted and buffed in all the right places, belongs to the new Classic, eh? Well, that’s Rajputana Customs for you! 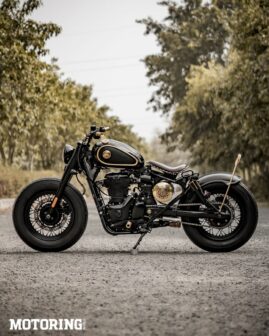 NEEV MOTORCYCLES: DIVINE
Ready for more traditional Indian bling? You had better be because that’s what Neev Motorcycles brings with its Classic-based Divine. Created in the bylanes of northern Delhi, this bobber channels the old city’s character and uses classic Indian motifs to flaunt a thoroughly antique vibe. The machined and engraved brass embellishments are the first to catch the eye on this matte black motorcycle, as is the gold-leaf pinstriping on the sculpted custom petrol tank. And that shiny sissy bar sits at the back of the bike, almost like a golden exclamation mark. 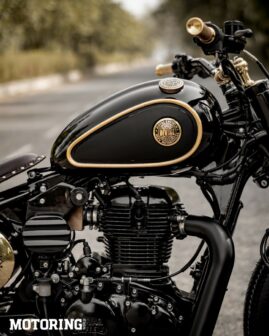 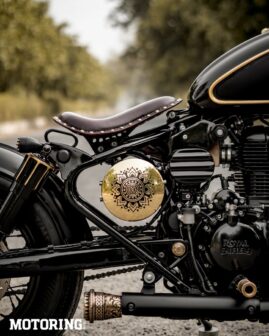 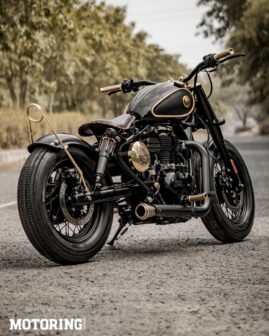 The finish and quality of work are almost surprising, given that Navneet Suri founded Neev motorcycles only in 2015. And like the name suggests, the motorcycles he makes are built on strong foundations, and few come stronger than the Classic. Speaking of classic, the Divine sports a riveted leather seat, and an exhaust tip that’d look right at home among a priest’s paraphernalia in a temple. But what undoubtedly steal the show are the mandala-sporting round brass covers on the Divine’s flanks. They almost make the other design elements look like they may be a bit too subtle for their own good. 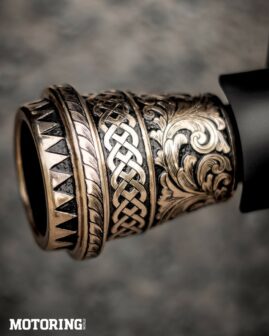 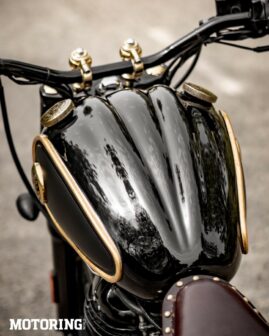 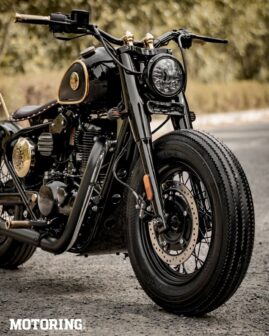 It’d be easy to get carried away with the Divine’s obvious aesthetic attributes and forget that a lot of work has gone into creating it. For example, would you have guessed that it carries a custom swingarm along with the rest of the custom bodywork including the lovely front fork covers? It’s so well finished that every part looks like it already belonged on the bike, and that’s the mark of a job well done, a motorcycle well built. And it’s quite impressive that the Divine manages to give a novel and wholly Indian twist to a motorcycle already called the Classic!