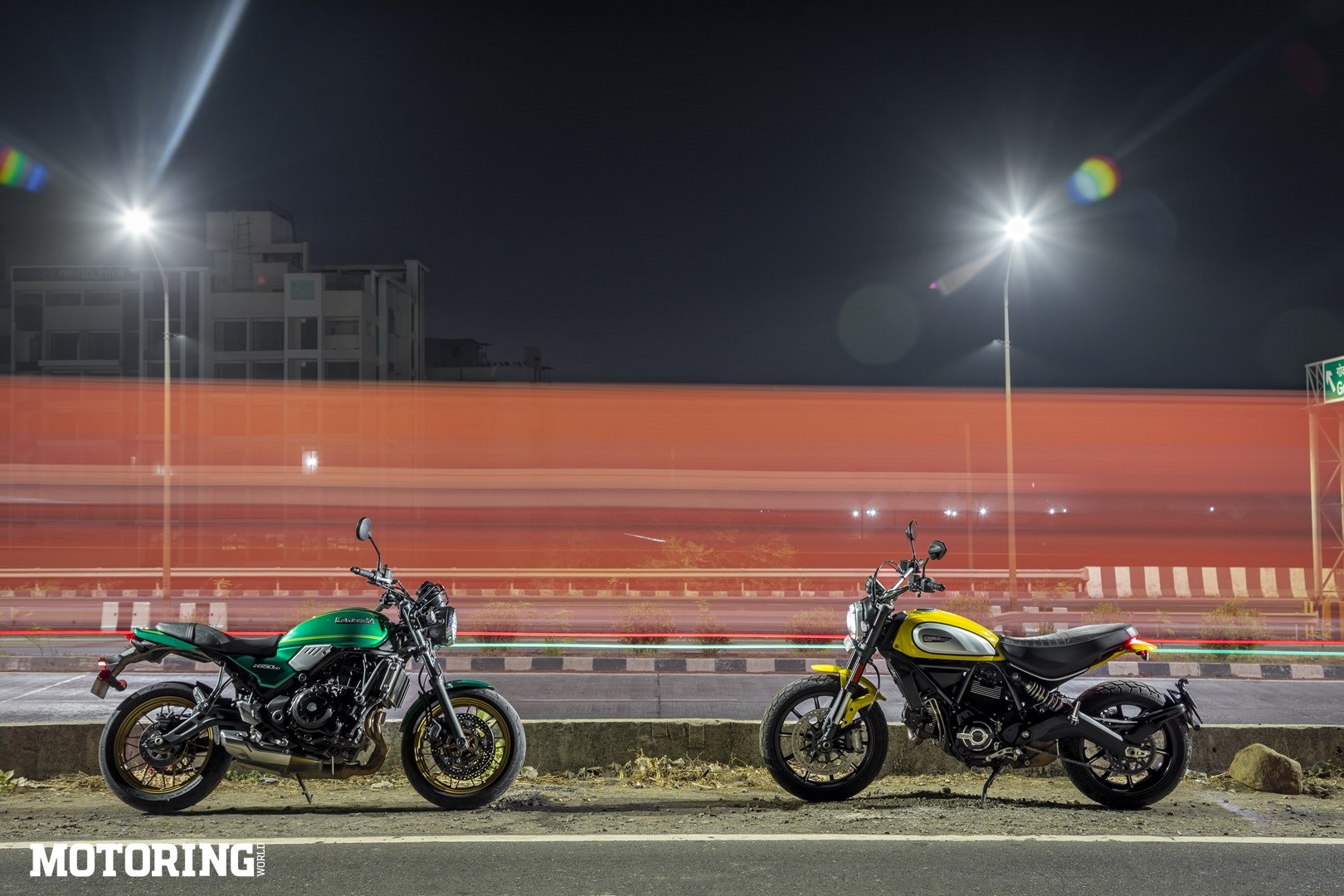 Many aren’t going to agree with me on this, but I love riding motorcycles at night. While I stick to well-lit routes, at night the density of traffic is significantly lower and I can ride for longer unlike morning rides without worrying about the heat. That said, what I also enjoy quite a lot are night shoots like this one. I couldn’t have asked for any other motorcycles to replace the ones here as these are the perfect retro machines to slay the empty road. 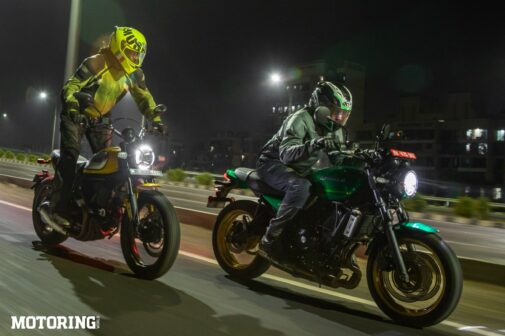 If you’d stare at these motorcycles even for a minute, you’d notice there is not even a single line that is straight. Rather every line and contour has a curved profile with the edges rounded off nicely. The glare cast by the street lamps simply glides over the painted surface of these bikes like silk. And while yellow turns out to be my favourite colour, I am also smitten by the deep green shade of paint that’s present in these images.

The Kawasaki Z650RS and the Ducati Scrambler are, rather obviously, as different from each other as the Japanese are from the Italians. The Kawasaki looks all set to pounce ahead but with manners. It rides on an emotion of heritage but that’s not to say it’s stuck in the past. It’s modern and sophisticated and if it were a man, it would be wearing a strong cologne, a black leather jacket, greying stubble and smoking a cigarette. The Ducati, on the other hand, has a very flamboyant personality. It seems to be on some kind of a constant high and due to that, it wants to do things that are up the road to mock the law. This one is the kind of a man that would have ruffled long hair, sporting a denim jacket and probably prefers wearing his own body musk.

Parked on the service lane along a broad highway that plies with trucks carrying shipping containers from the port to the city, the Z650RS looks at home. One reason is due to the golden pinstripes running along the length of the bike that lines up with the white road markings. And the second is Kawasaki’s huge involvement in the shipping industry in manufacturing ships that carry these containers across oceans. It’s the Scrambler that I’m concerned about though. A lone Italian in an industrial environment like the one here, I am surprised it hasn’t gone about swearing for the lack of colours and design in the surroundings. And its paintwork stands out in all of the pictures here, compensating for the sun acting as the point of focus for everyone to look at. That said, it sure does look like it’s about to stir up some trouble soon.

Now the Z650RS has little hope on a night like this because the Scrambler has most of the numbers in its pocket, you see. Held together by a steel trellis frame finished in glossy black, the Scrambler gets its mojo from a fuel-injected, 803cc, L-twin motor with two valves per cylinder. Considering the Scrambler is relatively pocket-size with barely any body panels, that motor is a scary prospect especially when you realise it produces 71 bhp and 6.73 kgm; that’s a lot of grunt for a motorcycle that’s bare-bones in structure!

The Z650RS is a little behind here in comparison on most counts. Its 649cc, fuel-injected, four-valve-per-cylinder, parallel-twin motor is definitely a bit more modern, but it produces 67.3 bhp — that’s about four less than the Scrambler’s — but almost there with 6.52 kgm of torque. Both bikes use a 6-speed gearbox, where the Scrambler like most Ducatis likes to hunt for neutrals between cogs. In terms of weight, the Scrambler has the edge here as well as it tips the scale at 189 kg as opposed to the 192 kg of the Z650RS.

But all of those numbers become redundant and irrelevant from the moment you swing a leg over them. On the Scrambler, you are welcomed with a handlebar so tall and wide that it could serve as a clothes dryer while your arms are flexed out wide, letting those armpits release the musky scent. The single-pod digital speedo is definitely a cool looking one and minimalistic but packs quite a lot of information including a gear indicator, fuel gauge and rider aids like cornering ABS. Nice. The Z650RS follows a more conventional form and I really love its almost-café-racer riding triangle. It has smooth flowing lines and you find yourself in just the right spot just like that. The Kawasaki sports classic twin-pod clocks with a small digital display positioned in the centre. Now, as much as I like the analogue needles, I am not the biggest fan of the faux-chrome trim around the dials — a bit of an overkill when the rest of the bike looks so beautiful. There aren’t many options as well to flip through in the digital unit, and for the safety net the Z650RS only gets dual-channel ABS, which is justified due to its smaller price tag.

After having lost count of the pictures we had clicked to get the best blur of the moving container trucks in the background, we were done with the stationary images and it was time to gear up and get to riding for the action shots. Let me begin with the Z650RS first. It is a motorcycle that does what it has to offer. It is a simple, refined and fuss-free bike that will crank up on the very first attempt and is ready to get going. While there is no hidden clause when it comes to this motorcycle, it for sure is quick off the line and by that I am also referring to how much it loves to get that front end up. And that is the very reason why I strongly feel that the Z650RS should come with switchable traction control, especially for the days when you don’t want to be taken off guard, with the front wheel pointing almost perpendicular towards the sky above.

In comparison to the Scrambler, the Z650RS feels far more refined and linear in its power delivery after the initial punch. The refinement of the slick gearbox to how well-calibrated the throttle, is something that mature riders will appreciate a lot, mainly those who enjoy well designed and engineered modern motorcycles. 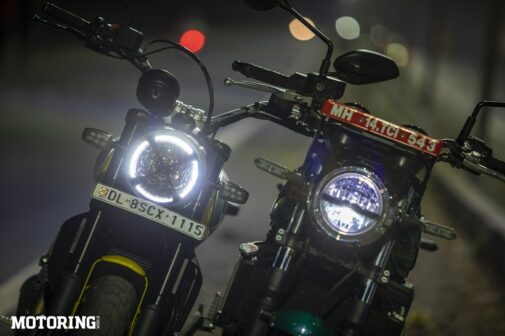 The Scrambler, on the other hand, clearly likes to make its presence noticed. Flick that engine kill switch upwards to reveal the started button, push it, and the L-twin roars to life with a raspy note emitted from the 2-into-1 exhaust system. A short blip of the throttle and you are quickly reminded of the bike’s scrambling genes. Slide the first cog in, add a few revs and dump the clutch, what you get is a brief moment of wheelspin before this Ducati picks up momentum. The dual-purpose tyre pattern adds a second in straight-line acceleration when starting from a standstill, but once the rubber grips, there’s no looking back as to how quick this motorcycle is. The benefit to that comes from the minimalist bodyweight that is further contributed by the compact dimensions. And thanks to the wide handlebar, it is a little easier to hang on to dear life.

If you have spent enough time on the saddle of a 250-400cc motorcycle, you’ll realise that the Scrambler is a thrilling motorcycle to ride but at the same time not that difficult to ride when ridden fast. It feels more twitchy at slower speeds as the aggressive riding stance asks for a good dabble of throttle all the time with the rear always happy to brake traction and kick the tail out. 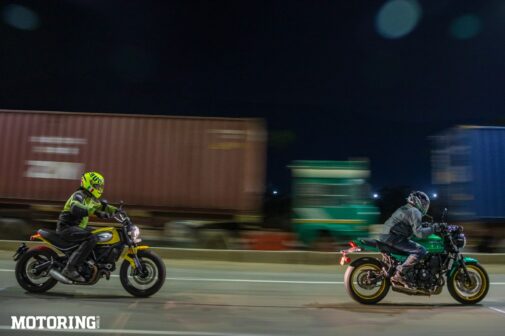 While the Scrambler is more dramatic and carefree, the Z650RS is more about refinement and maturity. The Scrambler likes to powerslide the way out the corners, while the Z650RS likes to point its nose towards the sky and carry long wheelies. In head-to-head acceleration runs, the Z650RS was consistently first off the line and it did stay in the lead for a couple of seconds while nearing the 100 kph mark. But, it was at that point where the Scrambler took over making the best of those few extra ponies and lesser weight. But, on reaching the 150 kph mark, the Scrambler’s steering starts to act a bit twitchy which is when you’d want to roll off the gas. Taking advantage of the situation, the Z650RS reclaims the lead breaching 150 kph and chasing further till the 170 kph mark, which it did.

However, in the end, these bikes aren’t just about going fast. They are also about offering the big-bike thrills to those who are limited by money to spare for bigger bikes. And hence it also becomes of paramount importance to fulfil other aspects of a motorcycle like comfort, control, agility and ease of riding. In this segment of machines, it is not about which one is the fastest, but it is more about which one lets you derive the maximum pleasure at the end of every ride. 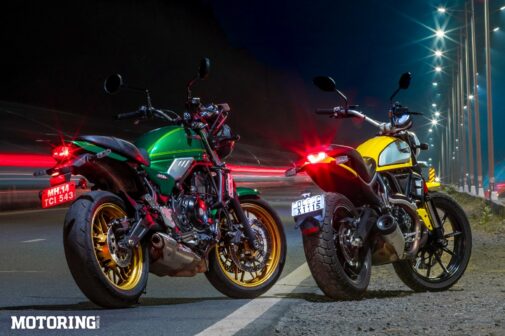 So, if I had to pick one of the two which is really difficult to decide, I would probably go with the Ducati, mainly because it comes with cornering ABS, and to add to that, also because it’s a proper retro-styled motorcycle from wheel to wheel. But if you think you have better control and coordination of your hands and feet to control and operate motorcycles, the Kawasaki is also a fantastic bike to consider. Besides that, both motorcycles have a lively nature, look absolutely gorgeous, but most of all have lots and lots of character. Honestly, it is all about having fun with motorcycles and these two machines manage a soulful job of delivering it. More to such joyful motorcycles and long rides through the night.