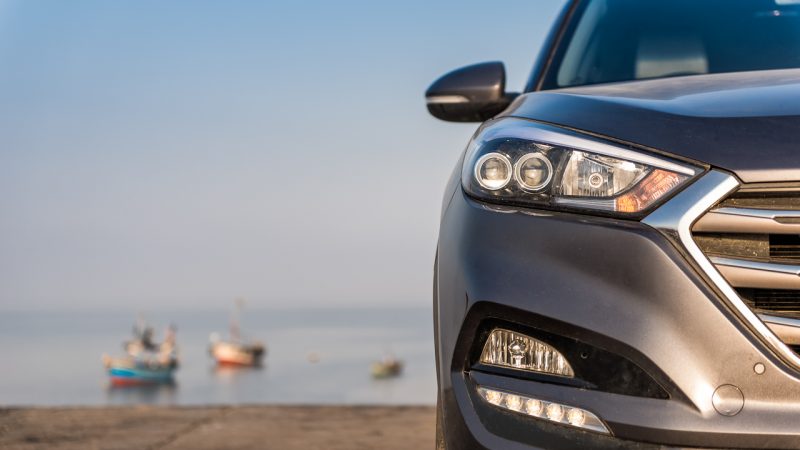 American marine artist Robert Wyland once aptly remarked: ‘The ocean stirs the heart, inspires the imagination and brings eternal joy to the soul.’ After seeing the snow in the Himalayas and experiencing the dusty terrain of the Thar, we headed to the Arabian Sea. Wyland isn’t wrong when he talks about the ocean inspiring your imagination. The sea has this uncanny knack of casting a spell on you – the sound of the waves hitting the beach; the breeze which blows can be hypnotic. However, before we reached the sea, we decided to take a detour in Rajasthan.

Despite the wide, open roads, the drive through Rajasthan is not an easy one. As we set out of Jaisalmer to head towards Daman – the last leg of the Great India Drive – we had the urge to explore a different landscape of Rajasthan. We had been in the desert terrain for close to three days and were looking forward to being on the coast. The Arabian Sea would have to wait.

Out of Jaisalmer, we decided to head to Mount Abu – the ‘hill station’ of Rajasthan. Desert and sandy terrain gave way to the countryside, where small towns were dotted along the highway. Suddenly, from the wide and open roads, we were on the back roads of Rajasthan. The roads were patchy but the Hyundai Tucson motored along comfortably. The open stretches where we let the Tucson loose is when we got acquainted really well with the powerful GLS 1995cc diesel engine. The Tucson is easy to handle at high speeds and you feel confident behind the sturdy wheel.

The Tucson is a comfortable car from the inside – the driver’s seat is adjusted electrically while the co-passenger strangely comes with manual adjustment. There’s ample space under the armrest as well as in the glove box. One feature that we would have loved in the Tucson is the sunroof. There’s a digital compass in the rearview mirror and the infotainment system’s navigation comes in handy especially when driving along the highway.
Even in the passenger seat, there’s proper leg room and headroom. The boot space is more than enough as we kept our cameras and equipment without any hassle. The tail-gate opens electrically and the material quality is also extremely impressive. It’s obvious Hyundai hasn’t adopted any cost-cutting measures and it shows in every aspect of the Tucson’s interiors.

As we got off the national highway to head towards Mount Abu, the sun was furiously beating down and there was no respite from the heat. Eating options are scarce in Rajasthan so we suggest you pick your spots wisely and don’t expect the highway to be lined with eateries. Mount Abu is situated at 4000 feet and is set against the backdrop of the Aravalli range. People from Rajasthan and Gujarat come here to get respite from the heat. We, however, had no such luck, as it was terribly hot with temperatures hovering around the 40 degree Celsius mark.

Still, it was pleasant to get away from the dust and sand storms. Mount Abu is the hub of hotels – if you throw a stone, there’s a good chance it will hit the door of a hotel! The town was bustling with tourists and has many attractions including temples and the one spot that every hill station in India has – the ’sunset point’. The drive to the hills in Rajasthan isn’t as testy as the ones you find in the Himalayas. You have to drive through a wildlife sanctuary to reach Mount Abu and the only wildlife we encountered was rowdy langurs.

A day in Mount Abu gave us an insight into the other side of Rajasthan and was enough to dust ourselves off – literally and figuratively. The Tucson was given a much-needed cleansing treatment and was ready to head to the last leg of The Great India Drive. As soon as we exited out of Rajasthan, we were stopped by a bunch of cops who wanted to ensure we weren’t smuggling illicit products (read: liquor) into the dry state of Gujarat.

Finding a tipple in Gujarat might be a problem but finding good roads certainly isn’t. This was the Tucson’s sanctuary as the open roads are where it gets to show its might and power. Hyundai has done a tremendous job on the Tucson when it comes to engine noise. Even when the car crosses 3000 rpm, you can barely hear the engine noise inside the cabin. The Tucson doesn’t float or gets shaky when it touches high speed and you feel comfortable at all times behind the wheel.

To reach Daman, we had to cross the big cities – Ahmedabad, Vadodara, Surat – of Gujarat. A word of caution, though, while driving in Gujarat – especially on the Ahmedabad-Vadodara expressway: keep a check on your speed as they’re pretty strict about following the limits. NH-44 is one of the busiest highways in India with its proximity to ports and there was heavy vehicular traffic. But the roads are sans potholes and there are more than enough places for you to stop and sample the Kathiyawadi cuisine. We stayed over in Surat for a night before we headed towards the Arabian Sea.
The weather Gods weren’t really smiling on us as we had expected Daman to be slightly cooler than Rajasthan but it wasn’t. Daman is a paradise. Well, let me clarify: it’s a paradise only for Gujaratis looking to seek solace in the bottle. In a sense, the place serves its purpose pretty well. But if you’ve the image of a picturesque beach town, then you are in for a massive disappointment. The beaches aren’t really clean and there’s little to see, but there are wine shops by the dozen. The beaches in Daman won’t allure to spend time in the town but the Arabian Sea looks magnificent.

For two weeks, we drove the Hyundai Tucson across six states and two Union Territories of India. The idea was to cover three diverse terrains and experience snow, sand and sea on one drive. On a drive like this, you need a car that doesn’t let you down and is a pleasure to be with. The Tucson makes you want to drive further and further and brings out the explorer in you.

As much as we would have loved to continue exploring different parts of the country, we headed to Mumbai after being on the road for 13 days straight. There was delicious food and some forgettable food, mediocre hotels, spectacular vistas, dangerous terrain – we experienced it all. When we were setting out from Dharamshala in the Tucson, we expected it to be a memorable journey and it truly lived up to its name: The Great India Drive. Snow. Sand. Sea. And one car to do it all – the Hyundai Tucson.