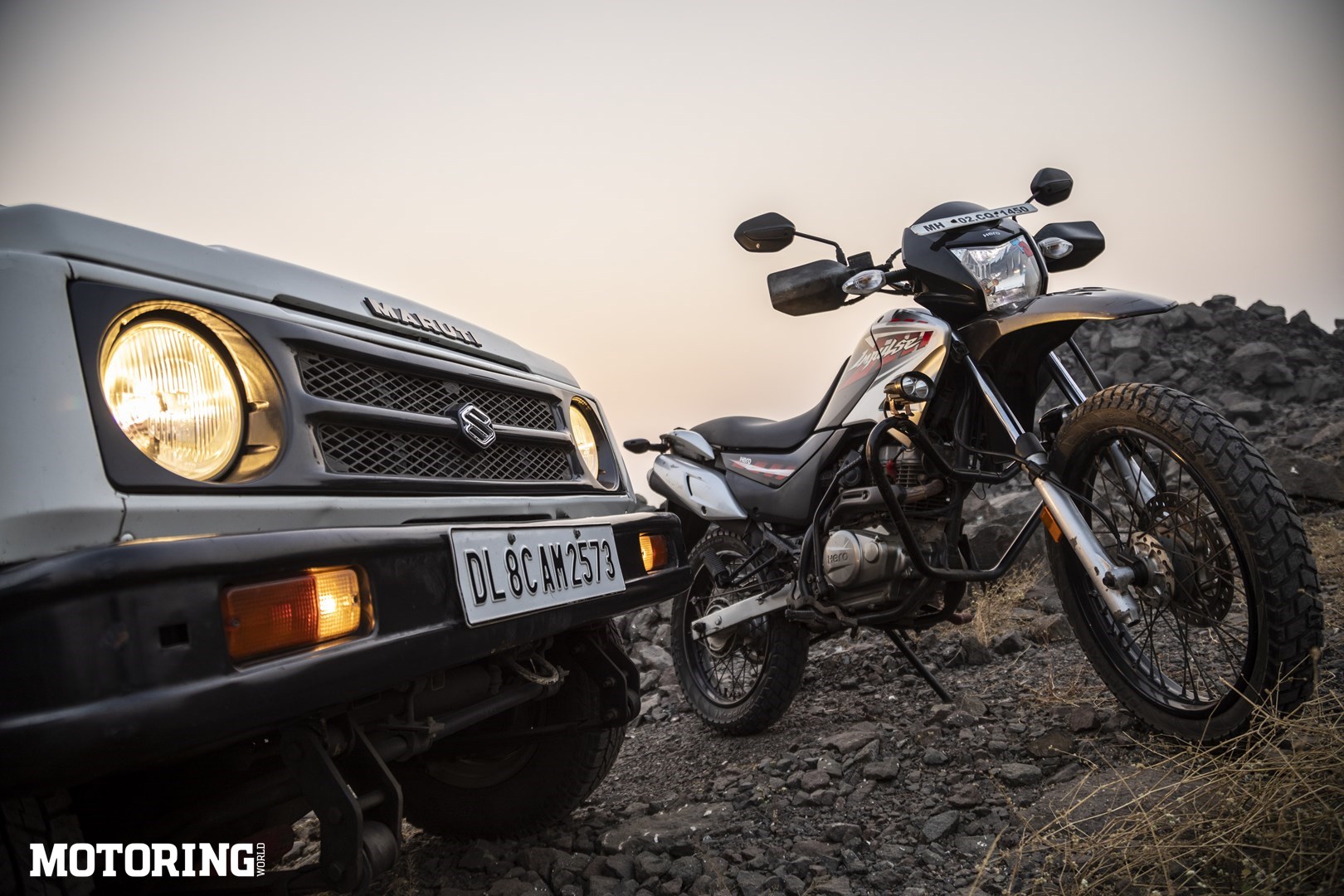 When was the last time you spotted one of these machines? In the case of the Maruti Suzuki Gypsy, only if you live in a locality that is associated with the armed forces will you come across one often; otherwise, it is more like a unicorn sighting. And the Hero Impulse is like Halley’s Comet, which requires the alignment of the cosmos to spot. Okay, I probably went a bit overboard with that one, but you get the drift, right? The reason why these two machines are here together is not only because of their rarity but also because of the common things they share. It’s a story of ageing but never forgotten machines that hold a special  place in the heart of every automotive enthusiast.

The Gypsy’s origins can be traced back to the Suzuki Jimny that was sold in Japan as a kei car or Japanese city car. The one that India received was the long-wheelbase version which, apart from making its way to our shores, was sold in most export markets. Wikipedia enlightened me that the Gypsy is known by 11 other names across the globe, how cool is that? The first series of Gypsys sold here featured a 1.0-litre carburetted motor paired to a 4-speed tranny with selectable 4WD, drum brakes all around and no power-assisted steering. 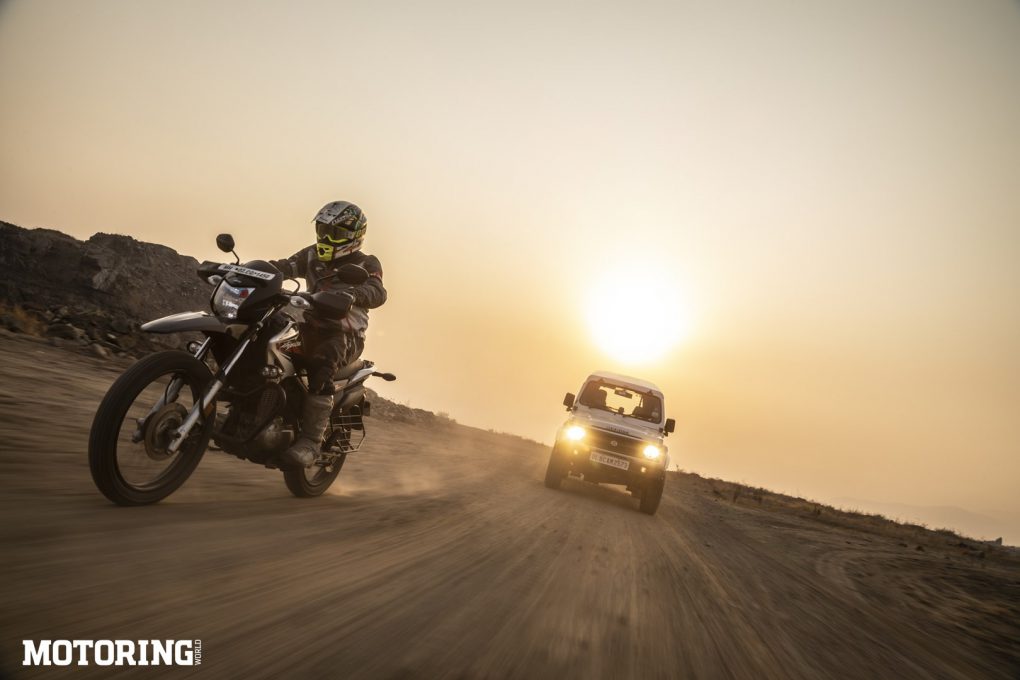 It was a bare-bones off-roader that could go almost anywhere off the tarmac. While Maruti initially offered it only with a soft top, owing to the popularity the bolt-on hardtop was gaining, the same was later introduced by the company. A few years down the road, after winning accolades in rallies, autocross events and becoming a trusted vehicle of the armed forces, Maruti introduced an updated version, christened the Gypsy King. The King, featuring a 1.3-litre fuel-injected mill, is considered to be the best version to own, just like the one here.

As for the Impulse, it was the first new motorcycle to roll off the assembly line after Hero ended its 26-year-long Indian partnership with Honda. The Impulse was a softcore dual-purpose bike that drew inspiration as well as its underpinnings from the Honda NXR 150 Bros which was sold in Brazil. The motorcycle was different from everything else on sale in the market back then. With elements like long-travel suspension, high ground clearance, minimal body work, an upswept exhaust and a wide handlebar, the Impulse gave the impression of being an off-road bike.

Sadly, the concept of off-roading was almost non-existent for the Indian masses, which led to Hero pulling the plug on the motorcycle. For the time that the Impulse was manufactured, the engineers at Hero were said to be working on its successor with improvements in  the design. But the limitation of being able to make any changes  and low sales numbers sealed the fate of India’s first modern dual-purpose motorcycle.

Now, that’s enough time spent in the history books. For those who still want to know more, there are ample archives on the internet for the Gypsy, but not so much for the Impulse. Moving on, both the car and the bike here come from different timelines; the hardtop Gypsy belongs to Vinit Malik, an engineer by profession, while the Impulse is my own.

Both the Gypsy and the Impulse are popular not because of staggering performance figures that will make your eyes water, but due to what they could do more easily than other vehicles. The Gypsy, with its body-on-frame chassis and lightweight construction coupled with the selectable 4X4 gearbox with low ratios, conquered most of the terrain without breaking a sweat.  Its utilitarian nature consisting of leaf-springs, metal bumpers, non-power-assisted steering coupled with a simple yet timeless design, remains undefeatable.

Vinit has owned this Gypsy since it rolled out of the showroom and has been using it as his daily driver, with its odometer already past one lakh kilometres. Yes, that is quite an achievement in itself that left me somewhat jealous. His Gypsy was originally a soft top, but he had it converted into a hardtop after his camera was stolen from it. The  only other modification carried out is the installation of air-conditioning, which I must say works like a charm.

On that note, given my limited experience behind the wheel of a Gypsy, the time I got to spend driving this one was memorable. The first thing I noticed is the bare simplicity of the cabin, and the second was the presence of two gear levers reminding you how cool this car is. Not much was offered back then and not much was needed, either. The view of the road ahead through the flat windshield is captivating, with the hood always in sight. Despite the high mileage of this Gypsy, it shows no sign of ageing or loss of power. It responded eagerly every time I dumped the clutch and stomped on the gas pedal. The ride quality is nowhere close to modern standards, but it’s not bad either. It is a bumpy ride, but it is a part of the Gypsy experience.

Weirdly, it is the same kind of feeling with the Impulse. Once astride, you are seated higher than other motorcyclists around you. Besides a button starter for the motor and a small digital display embedded in the instrument console, the Impulse is simple. Basic controls, nothing fancy to brag about. The motor is even fuelled by a carburetor, to keep matters undecorated. The magic of the Impulse comes from its lightweight chassis, 21-inch front and 19-inch rear spoked wheel setup and long-travel suspension. Oh and, I almost forgot the dual-purpose tyres. 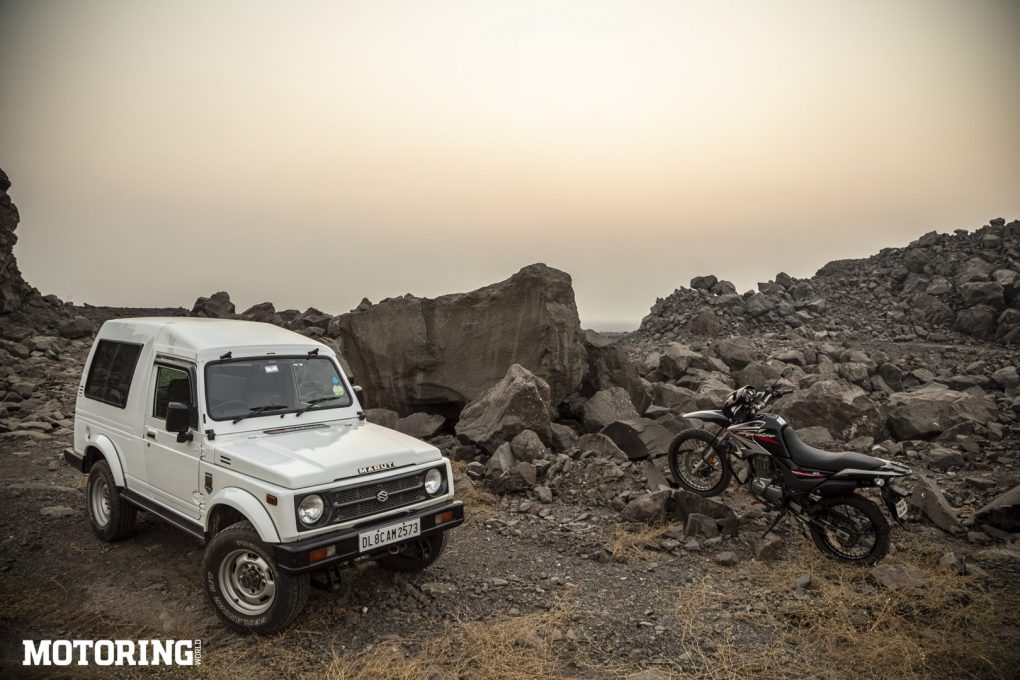 Together, these allow the Impulse to scale inclines and challenging terrain like a mountain goat. Yes, it does lack power, which has always been its bane, but if used tactfully, one can achieve a lot. Whether on or off the tarmac, the suspension is soft and wafty as it absorbs almost all kinds of undulations, leaving you with a plush ride.

Summing up the time spent riding and driving these machines, they are filled to the brim with a sense of excitement and character that doesn’t fizzle out easily. The Gypsy and the Impulse seem like siblings that share the same vibe but never got to interact with each other, and given the times, probably never will. They share the same code of simplicity and fun, and make all the more sense to own given the environment and conditions we drive/ride our modern-day vehicles in. Come to think of it, I think I need to get myself a Gypsy now. Damn!