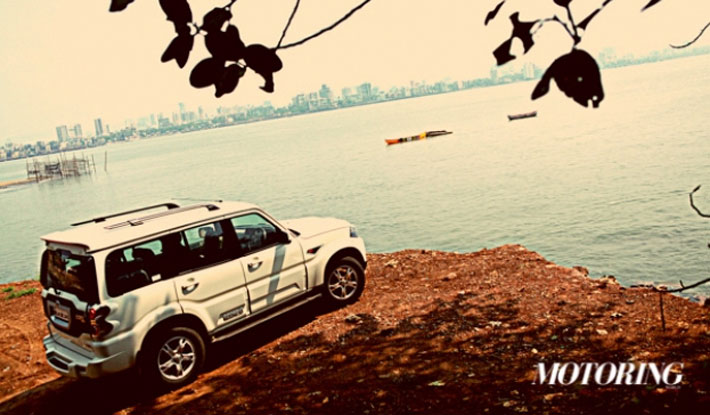 You’ve already read our first impressions of the new Mahindra Scorpio and the road test, too. In both cases, however, we couldn’t tell you what the Scorpio is really like to live with. After all, when it comes to ownership, you look for a lot more than merely ride and handling or 0 to 100 kph timings, right? We start off this series with the new Scorpio, the homegrown SUV that’s been the darling of the Indian masses since 2002. Here’s how the week went by:

DAY 1
‘Please let it be red!’ I was wishing silently. The enthusiastic folks at Mahindra had sent over a candy red Scorpio for our Car Of The Year evaluation round and I willingly traded in the key to a, well, candy red Audi A3 for the Scorpio’s. Maybe it was the Christmas spirt or simply the bold appeal, but I just couldn’t resist. This time round Murphy had a say in matters, however, and a white Scorpio drove in through the gates. Not by itself, obviously. Great time to bring out the gold-rimmed Ray-Bans and do the aspiring politician gig, I suppose.

DAY 2
The magazine’s still not sent off to the press and we’re working into the night. The phone rings, and on the other end are a bunch of friends who want to go karting in the wee hours, followed by hunting down a greasy dinner. Sounds like a long night, but I have a USB stick brimming with music and the Scorpio’s in-dash information display says I’ve enough fuel to reach Goa. Never a bad feeling, that. Leave the office at 10.30 pm, trailing the slimming city traffic. The Scorpio’s cabin is nicely muted and for its size, it still somehow feels like a nice car to cruise the city’s streets in. Friends show up on superbikes, so I play Good Samaritan and volunteer to make room for their kit, luggage and girlfriends. More like ‘goods’ Samaritan, then.

DAY 3
Routine commute day, except that it’s Christmas and I’d rather be away fishing and riding with friends. The Scorpio’s still got some of that new car smell when I get in, and remnants of the night before’s escapade – the odd Red Bull tin, entry passes for the karting arena and a balaclava if I can see things clearly. Ugh. Find myself a bit impatient with the entire start-up music thingy the Scorpio’s equipped with and there’s an annoying jarring sound from the front-left speaker. I grin and bear it, or just bear it maybe. The tyre pressure warning indicator’s come on in the instrument console and I can’t figure why. One more irritant and I’m binning it and going for the motorcycle instead. Go in to the bowels of the information display and figure the warning lamp is for the spare! Gah! We’ll deal with it later. What’s next, Murphy?

DAY 4
The Scorpio’s 60 litre fuel tank seems more like 600. I’ve already driven it close to 500 km (blame my long commute and an indulgent social life) and the digital fuel gauge is still over the ‘half’ mark. The in-dash LCD display says I’ve got another 350-odd to go. That translates to 14 kpl, most of it in the city – not bad, eh? The day’s to end in me playing party driver to a handful of Motoring veterans and they’re mighty impressed, too. This is a bunch who spent a lot of time yumping Scorpios when it was first launched in 2002, so… I learn a thing or two about rebound damping and the fact that the new Scorpio understands the concept really well. Body roll is still evident, but not to a nauseating degree unlike old times. It’s well past midnight, my passengers are at ease, and the Scorpio is going strong taking in the oddities of the city’s roads (paver blocks, random speed breakers) at higher speeds without complain. Also, the lights on this car really are terrific.

DAY 5
The new-car feel is somewhat wearing off, mentally at least. I realise I’m not such a fan of the plasticky ticking sound the steering-mounted controls produce – it just doesn’t feel expensive enough. Ergonomically, the controls – all of them (save the Aux-in/USB slots, which are difficult to find in the dark) – are bang on and I’m perfectly at ease with the commanding driving position. A few things I don’t like – the tail gate shuts somewhat unconvincingly; it always feels like it hasn’t bolted into place and that double-check’s a bit annoying. Second, I’m all for factory-fitted infotainment units but a little more focus on audio quality simply adds a sort of ‘premium impression’ – for me, at least. Having said that, the Scorpio does feel very well put-together and there’s a sort of rich ruggedness to the textures (which Mahindra has thoughtfully not overdone – unlike in the XUV) used.

DAY 6
Gave into the motorcycle for a few days, so we skip to New Year’s eve. There’s food, luggage and what-have-you to lug to Pune today. The boot (if you can call it that) is comfortably loaded and it’s the Scorpio’s first proper highway run this week. It holds high-speeds (no numbers, please!) really well though it does skimp on some of that likable quietness in the process.

Fuel-efficiency has gone up to an indicated 15.5 kpl (I still haven’t tanked up, by the way) and I’m really quite enjoying the stint which has become more of a commute for most of us motoring hacks. It’s turning heads, too, but that’s mostly because everybody thinks there’s a new politician in town. Ugh. The Scorpio really is a rewarding car over a long distance. There’s comfort, torque, safety and entertainment (indispensable to long-distance driving) in good measure and I’d really like to drive one to, say, Goa. But that’s also because I really like driving to Goa anyway…

DAY 7
Boo hoo! The Scorpio has to go back today! Except, it isn’t actually going anywhere. As is my long-standing luck with Mahindras (the Quanto, the Thar…), it’s going to stick around a bit longer Still, taking into consideration the format of this story, I’ll round it off to come up with a verdict. Overall, then, the Scorpio feels new and exciting but even after the novelty wears off, it has lots going for it that you will enjoy. I’d like to live with the base version as well, just to see what kind of difference it makes. It’s surprisingly pleasant to drive in the city, comes into its own on the highway and off the road, it has the makings of a decently fun car. The 4WD version is being readied for launch as we speak, and I’m already getting ideas…