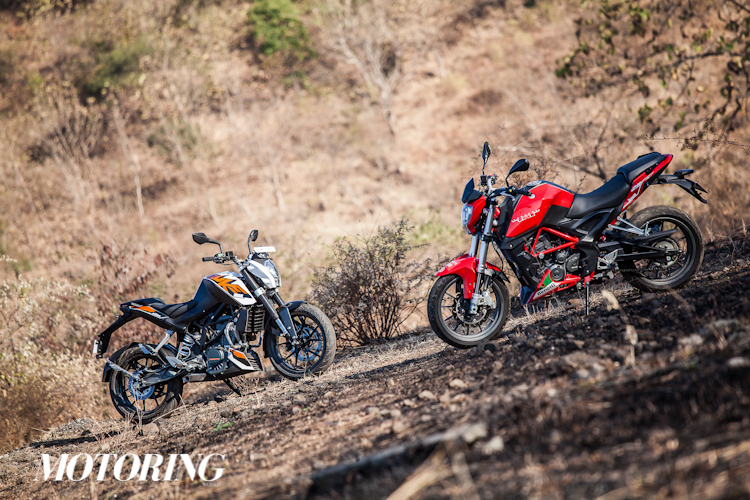 Whirlwind romances, life-threatening breakups, motorcycle crashes, drunken escapades and run-ins with the law. Isn’t that what the final threads of teenage are all about? This is your time to make an absolute mess of everything, to accumulate regrets which you will have enough time to ponder upon as the greys make your scalp a permanent home. For those who’ve just hit the legal age to acquire a motorcycle licence — you’ve got two years to do something absolutely spectacular and borderline intolerable with your lives. For those who missed the bus, here’s your chance at redemption.

The two motorcycles you see hoisting their noses up that crest are the ones that will take you back to the magical days. Absolutely wild brats, that’s what they are. No finesse, no nuance, unknown to the ways of sophistication and of affluence, these motorcycles are meant to be ridden hard and crashed harder. You’ve met them before, the KTM 200 Duke and the DSK Benelli TNT 25, but like all good teenagers, they’re up for a fight. Expect broken noses and abuses so inventive, they would impregnate a rock. Regrets? They’re a decade away! Popcorn’s ready?

LOOK AT ME, NOW!
And put on your glasses. If your vision isn’t 20/20, you could be forgiven for thinking the Duke and TNT look identical. From the vertical layout of the headlight, the low-swooping tank, the exposed trellis frame and the minimalist tail-end, both the motorcycles come from the exact same school of design. The KTM is the tinier of the two, however, which is exciting for some and a hindrance to others.

The Benelli does look more grown up, with its lines being mildly easier on the eye. But both, without a doubt, look top notch, helped immensely by the meaty cycle parts and exposed motors on full display. Sort of like unabashed cleavages and six-pack abs, eh?

KNOW WHO MY DADDY IS?
Oh, it’s such a shame we couldn’t shoot this comparison in Delhi, where abrasive one-upmanship is a vital factor in the air you breathe, on odd days and even. All right, so both motorcycles come from very influential families and it shows in the power they have over matters. The 200 Duke, five years into this game now, still has very exciting numbers to show — 24.6 bhp at 10,000 rpm from a 199.5cc, high-compression single-cylinder motor and a 136-kg kerb weight. The TNT 25’s numbers are certainly better, what with its 249cc motor producing 28.1 bhp at 9800 rpm and it generates more torque of the two, too, with 2.2 kgm as opposed to the Duke’s 1.9 kgm. Then again, the TNT weighs 159 kg, so that must even things out, right?

Talk is cheap. You’re more likely to remember a solid uppercut than a wise verbal comeback, ten years into growing up. The only way to settle the one-upmanship, then, is to take it to the street — exactly what the day had in store anyway, as Raunak and I raced up a set of twisties, our respective ferocities hidden cleverly behind tinted visors. Let’s not beat around the bush too much; in a segment so tightly stacked together, power-to-weight ratio is king. And this is why the Duke, despite its vintage and relative power deficit, stayed ahead despite the TNT’s best efforts. The Duke takes off with the immediacy of something that runs on electricity, its front wheel well clear of tarmac until you reach for the rest of its (very slick) gearbox. It’s crisp, aggressive and with an exhaust note that sounds like it’s caught a cold, it’s simply too involving, too engaging to not be fun.

The TNT is the one that has to really work hard here. While the extra grunt is as noticeable as it is enjoyable, the TNT 25, like most other Benellis, is more of a peaky number, which means you have to patiently build up the revs until you can get a closer look at the Duke’s tail. Seeing the Duke in its mirrors is something that will take superhuman effort, however, since the TNT 25 lacks the aggression and agility from both its motor and chassis. That’s not to say it isn’t fast. Either motorcycle will show you the good side of 140 kph on the speedo, but it’s the Duke that feels younger, more aggressive and keener on letting you have a good time. This does turn around on the highway, though, where the TNT settles in comfortably while the Duke is still raving mad, furiously looking for a head to smash with a beer bottle.

TURN IT UP
Ooh, the curves! Isn’t that what looking cool in college was all about anyway? Well, at least if you belonged to the less fair of the sexes. Out here, aggression is pointless if the rest of the motorcycle isn’t up for ridiculously quick changes in direction and, to be fair, it’s a really tough fight between the two. While the Duke, with its tiny frame, is effortless in a sense, you do have to be wise in adapting to its ways. Its lack of girth and tendency to fall into corners is almost unnerving and truth be told, it’s one of those motorcycles which is best ridden without hanging off too much. Look where you want to go and the Duke will take you there, quicker than you’d have imagined it. If God has been generous while endowing your proportions, you  will find the Duke a bit cramped, however.

The TNT 25 is more old school in this aspect. Big, roomy and very predictable most of the time, the TNT is fun to ride really recklessly thanks to the one virtue common to every single Benelli — its cycle parts. The chassis, tyres, suspension and brakes will just never let you down, provided you get the hang of it quickly enough. Where the TNT suffers is in its basic handling setup, which is biased towards touring rather than all-out streetfighting and this shows in the way it responds to very aggressive inputs. The suspension is a bit too soft to make full use of the chassis’ potential and its kerb weight plays a major role in adding a sense of sluggishness to its dynamics. For the benefit of perspective, think of the Duke as Rossi’s M1 — light, nimble and effortless — and the TNT 25 as the Desmosedici — quite a workout, but rewarding in the hands of a really good rider. Guess who’ll want to go fishing sooner, though.

KNOCKOUT PUNCH
In the big bad game of motorcycling adolescence, being good enough is unacceptable. It takes a special quality to be remembered as the baddest lad of your time and while the distinction isn’t split wide open in this case, it’s still easy to tell. The KTM 200 Duke is a motorcycle that’s not entirely perfect, but its imperfections are just as addictive as its all-round performance that is hard to beat. The TNT 25 is a seriously good effort and a very likeable motorcycle, but the extra dough you have to shell out for it isn’t fully justified. In other words, both are fun, but the Duke is much more so. You’ll put yourself closer to the edge astride the Duke and probably take a tumble or two in the process.  But a decade later, it’s  a regret you’d be  happier recollecting.