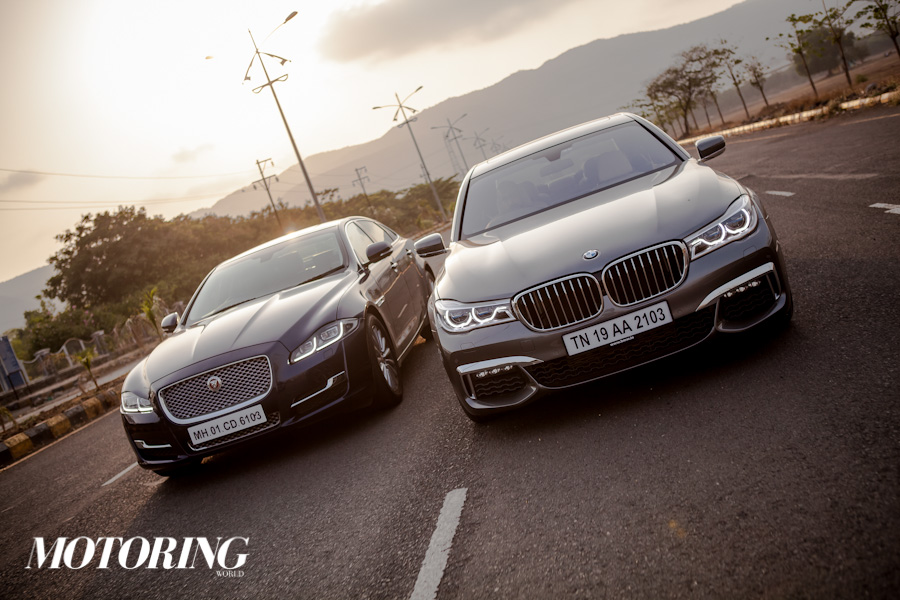 People have come to expect a lot from cars. I know this because I was on the Internet a while ago, on YouTube, and I saw a video of a man trying to drift an ice-cream truck. The funny thing is that he actually managed it. That truck slid better than a bribe being exchanged between two hands, and that got me thinking. Why not? Why shouldn’t I expect cars to have a serious case of dissociative identity disorder? We’re already expecting them to be much more than just devices to help us to point B, so we might as well go the whole hog, eh?

What’s to make of these two here, then? Sitting pretty in either corner are cars that I’d term glorified La-Z-Boys, were this story to be written a decade ago. They’re not now, though. I mean, yes, they do get you to the office in obscene luxury and comfort still, but they also do more than that. Take the lovely new BMW 730Ld, for instance. I don’t remember the last time I drove something this large and thought, ‘I wonder how this thing would do around a track.’ It’s like watching a walrus up and outsprint a canyon man with a number on his back. Six cylinders, 261 bhp and 63 kgm (!) will make you do that, I suppose. It’s  that sort of duality that  baffles me.

On the one hand, you have such a sumptuous and exquisite cabin. I absolutely love what BMW’s done here and I’m not at risk of being called an outcast for saying that it’s at par with another German walrus, one they all tout to be the best. Well, my colleague Ruman does, at least. Back to the point: it is incredibly opulent in the BMW. There’s quality everywhere — in the switchgear, the seats you sink into, the absurd amount of tech, and just as you’d expect, there’s even more of it at the back. Heck, it even gets a detachable Samsung tablet that controls everything from the lighting and sun-blinds to the navigation and vehicle information. And going back, on the other hand, the 7 is just so stunning to drive.

Switch all the driving modes to ‘Aren’t we ambitious’, watch the fully digital dials in front of the steering wheel go red, almost urging you to get your move on, and it’s the fastest way to get the rear occupants alarmingly sick thereon. It’s quick, it’s surprisingly nimble, and you can get yourself a massage while attempting to kick the tail out. Even the 8-speed auto works like a dream and when you want more control, the paddle shifts are quick to respond to your wants. While I didn’t focus on it too much, the 7 did manage the slow bits pretty well, too, and by that I mean the ride was supple where it needed to be and firm enough to be stable when you’re gunning it down the road. It’s a shocker, the new 7.

Can I say the same about the other car here, the new Jaguar XJ? Not entirely. Does that mean it’s not convincing? Absolutely not. I’ve always had a soft spot for the XJ and that should, ideally, count for nought in the line of work I’m in, where objectivity and fair-play should be paramount. We don’t, however, live in a perfect world, so yes, the soft-spot lives on. It’s a low, long and swooping car, unlike any other in this segment, and that’s a good thing. The most appealing bit about the XJ is its character and you can’t put a price on that. A big part of that character comes from the way it looks and, thankfully, Jag hasn’t tampered with that.

The new bits on the XJ are subtle revisions to the bumpers, tail-pipes, tail-lamps and headlamps, and Jag also saw it fit to bump the wheel size down an inch to 18 inches. Where it has made some discernable changes are in the cabin, courtesy Jag’s new InControl Touch Pro infotainment system that helps things along immensely. It’s got the same layout as the smaller XE’s unit, but is a lot smoother to use and has a lot more features. Even the all-digital instrument cluster now comes with much better graphics. All this keeps the XJ a lot more relevant in comparison to the 7, but it’s just not there yet, honestly. Viewed in isolation, the XJ is stunning inside and out, but it’s just that the 7 does everything better. If you want a precise number, it’s 44.862 per cent better, according to our extensive testing results.

It’s the same story when I tried making the XJ jump through hoops. Don’t get me wrong here, because the XJ, in this 3.0-litre diesel variant, has enough go: 291 bhp and 71.4 kgm, to be precise. It’s really quick off the line because the power steps in rather early — at around 1500 rpm — so you need to exercise restraint with your throttle inputs if sir is having a cuppa at the back. Even the 8-speed ZF auto isn’t the smoothest, really, so hard driving isn’t its forte, sadly. Again, I’d like to reiterate that it is very quick — 6.4 seconds to 100 kph ensures that — but it’s just not in its element doing it, which is quite unlike the 7. Revved hard, it even feels a touch noisier than it should be for a luxury limo. I suppose the redeeming factor is that electric power steering (yep, Jag’s moved on from the hydraulic setup), and just like in the XE, it’s a delight on the move. Corners are decent fun thanks to it, although you will have to keep an eye (and an ear) out for the inevitable wallow and scuttle when you end up pushing it too hard around bends. It now even rides better thanks to the reduction in wheel size, which is saying something considering the previous one was pretty much the benchmark in this segment.

So which one does the hard-charging-La-Z-Boy act better? It’s pretty easy to spot the better car here, really. The XJ misses out on a few things like refinement and tech, and it’s not as much fun to drive as the 7, either. It scores heavily when it comes to oozing character or standing out. There’s absolutely nothing wrong with it and it’ll even be less expensive to buy — Rs 1.08 crore for the Jag as against Rs 1.23 crore (both ex-showroom, Delhi) for the 730Ld M Sport — so that’s another point in its favour. It’s just that, if it were between only these two, I’d much rather pay up a bit more and get the 7 because it’s just more of a complete car. It’s more fun to drive, is more luxurious, has way more tech, and just feels quicker despite being down on power. If duality is the name of the game, the 7 is your winner. Plus, given time, I’m sure you’ll have more success in getting your 7 to slide around like that ice-cream truck on YouTube. Tempt you enough, then?