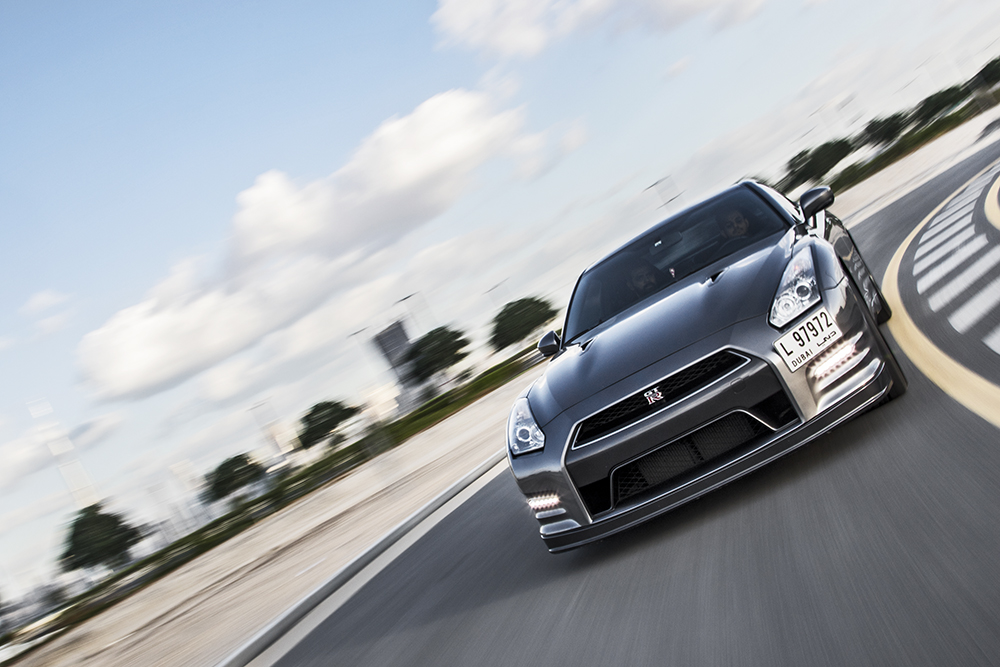 The glass-walled elevator of my swanky Dubai hotel brings me down to the lobby rather quickly. Bleary eyed and very deprived of sleep, I walk out onto the porch, barely able to distinguish between the Lamborghini Huracan from the Aventador parked next to it. The omnipresent G63 AMG is next in line and so is some sort of hopped-up Maserati. The Nissan GT-R looks a bit underwhelming in this company and not without reason. Going even by its last update — the SpecV — the GT-R is a six-year-old car and unlike its R34 predecessor, it’s not as much a subject of folklore. This is not quite the big bang I was hoping to help myself to in the land of excess.

Thankfully, being a judgemental moron has its advantages as I soon found out, having been tossed the keys to said GT-R. ‘It’s pushing 700 bhp,’ said its owner without much of a hint of pride before asking me to ‘be very careful with it’. Not wanting to upset someone in a country where having a pet lion is only as normal as owning a Lamborghini LM002, I agreed wholeheartedly. And suddenly, the blur in my eyes began to disappear. I was strapped inside a 727-bhp R35 Nissan GT-R, a very souped-up successor to the legendary R34 Skyline, in the wrong side of the cabin and about to drive on the wrong side of the road. That Lamborghini I just ignored had  100 bhp less — how many times in life could I have ever said that?

Murphy must have been fast asleep at that unearthly hour, because I was indeed driving down the cobbled driveway in that car, much to the bewilderment of the valet, who had parked my rental-issue Nissan Altima only the night before. Past the hotel’s perimeter lay a hardly used stretch of solid tarmac and instructions came from the GT-R’s enthusiastic owner to floor it. Remembering that bit about the lions and LM002s, I could only obey. An additional quip about there being no speed cameras on this stretch cleared the cobwebs off my conscience and before I knew it, the tachometer was well past 7000 rpm, with all sorts of whooshes and crackling noises emerging from either ends of the car.

This cannot be true. Who in their right mind would say, ‘Hey, I’ve just got myself a spanking new Nissan GT-R and I don’t think it’s quick enough for me’? And for what? Especially in a country where traffic laws are strict enough to give your most inhumane mathematics professor an inferiority complex? ‘This just doesn’t make any sense,’ I say to my passenger, who, as it turns out, knows a little too much about speed cameras in the city for the police’s comfort. This is good, because I now get to really floor it and before I know it, I’m pushed back in my seat, trying hard to not let go of the steering wheel. This is pretty much straight out of a Fast and the Furious movie minus the tacky special effects.

The only special effects here are the ones under the hood and saying those work really well would be a huge understatement. The 3.8-litre V6 in the stock GT-R already benefits from twin-turbocharging so the first step was to install bigger, more aggressive turbos which make for far superior air-induction. Then came the ECU flash, which is majorly responsible for the substantial step-up in power and torque, and finally a boost controller that allows the driver to manipulate the exact amount of boost pressure needed in a moment of absolute lunacy. Add to that a titanium full-system exhaust, selectable ECU maps and all the original goodness of the terrific GT-R and what you get is full-blown Japanese engineering at its sub-10-second-drag-run best.

That no two GT-Rs are the same — the engines are hand-built, so they’re never really exactly identical — adds to the charm and, well, any car that spits flames with every downshift is extremely special in my book. But more than anything else, it’s the manner in which this GT-R accelerates that makes it so bloody brilliant. One moment, you’re parked by the Dubai skyline, building up revs for the launch control to kick in and in the next, the Burj Khalifa is nothing but a very blurry spec in your rear-view mirror. It’s phenomenal, the metric precision with which the GT-R makes its way through the most arrogant of headwinds, the speeds reaching the wrong side of the law before  you can so much as say  ‘Lamborghini’. Yup.

The wheels spin up despite the all-wheel-drive unit’s best efforts and the intake noise is so sharp, you can cut your finger on it. It’s so good, this car, it’s almost wrong. This is where the R35 GT-R really deserves immense respect because it was designed, ground up, in full knowledge of the fact that it was going to be bought by absolute hooligans. Yes, Nissan did its best to make the GT-R untuneable and it was a while before the first ECU hacks on the R35 came about, but today, the R35 has formed a cult following of its own — just what its makers wished would happen. The Japanese know only too well about engineering front-engined sportscars and this  727-bhp number is an exceptional ode to the reverential GT-R badge. It may never be as holy as the R34 Skyline, but when you can go from  0 to 100 kph in just over two seconds, holiness shouldn’t be the biggest of your priorities. Speed cameras, on the other hand…