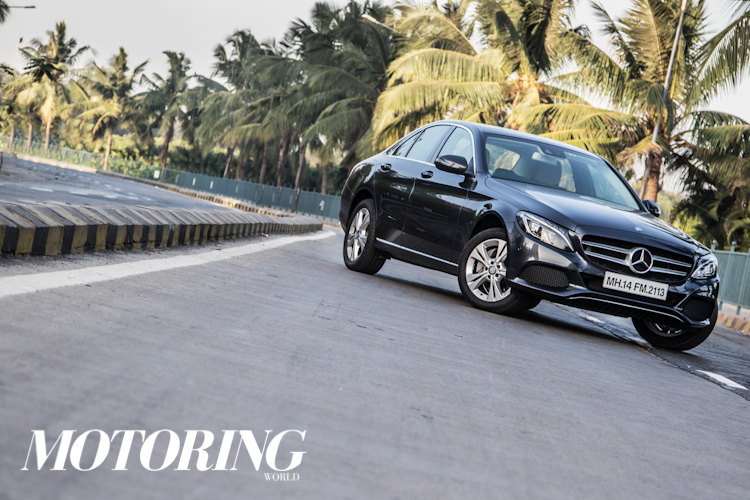 I’ll get straight to it: there’s very little that you would be doing wrong by buying a Mercedes-Benz C-Class. For starters, it looks like so much attention was given to the styling, and as a consequence you’d love to be seen in it. Now, enough and more has been written about the new C on Motoring World’s pages in the recent past, and I wouldn’t blame you for thinking that the car on these pages looks pretty much identical to the current one, so why feature it? There’s one big change, that’s why.

Up until now, Mercedes would only sell you the C-Class in the rather popular 220d guise, as far as diesels go. What we have here is the C250d – a 220d with a decent kick of more power. The same 2.1-litre four-cylinder diesel engine comes into play here, except that it now uses twin-turbos. All this gives you better power and torque figures – 202 bhp and 50.9 kgm, to be precise. That’s a neat 35 bhp and 10.2 kgm jump over the 220d. In terms of mechanicals, Mercedes has also employed the 9G-Tronic gearbox into the 250d, so you can emulate one of those never-ending chase sequences in the Fast and Furious movies.

Having taken all of that into consideration, you’d think the C250d would be a better car to drive overall, wouldn’t you? Well, you’d be right on the money there, because it is. There’s a noticeable amount of power all across the rev range and the twin-turbos just ensure that the engine is a whole lot punchier than earlier. I’m not too sure about the 9-speed gearbox, though, because all its ratios are really close to each other.

Don’t get me wrong, it’s fantastic in every sense of the word. It’s just that I’d have preferred slightly longer ratios. One place that’ll come in handy is when you’re doing long runs on the expressway, and I’m quite certain that the C250d will feel right at home in just such an environment. Cut to the horrendous urban traffic, and the C will make light work of that, too, thanks to the light steering and the silent engine. The only thing I had an issue with is the ride, which is still a bit on the firmer side. And while it isn’t the sharpest package handling-wise compared to, say, a BMW 320d, the car does do pretty well for itself on the twisty bits. Definitely nothing to complain about, that’s for certain.

So what, then, is to be made of the C250d? You’ll have to pony up Rs 44.3 lakh (ex-showroom, Mumbai) if you’re interested in one, and that is about Rs 5 lakh more expensive than the C220d Avantgarde. For the premium, though, what you get is a very powerful engine, a lovely gearbox, adaptive LED headlamps, ambient lighting for the cabin and park assist in addition to all the features you get in a 220d. Seems worth it? I would think so. It’s certainly worth a look, that’s for sure.