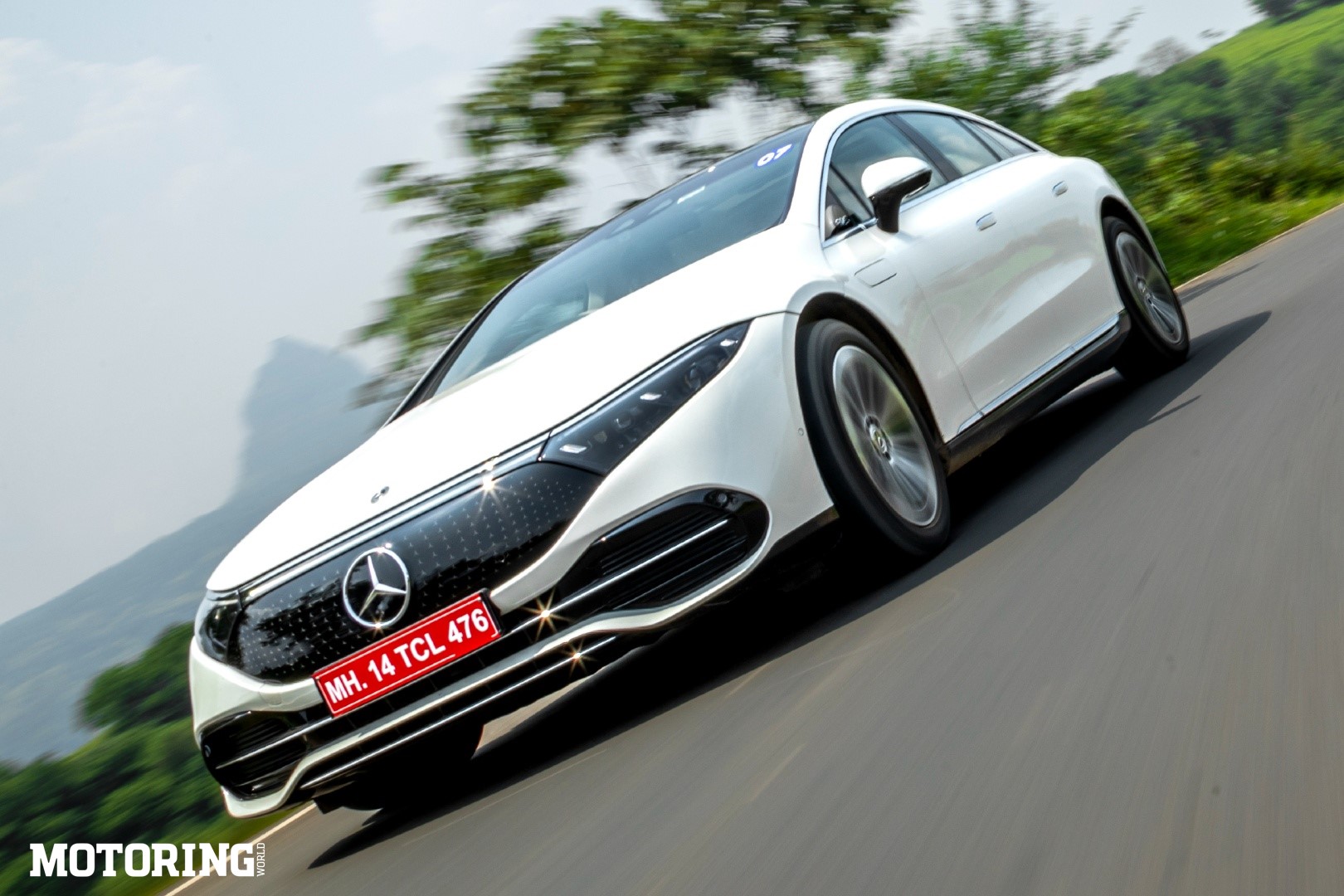 A legacy is not something you mess with. Adding an S to the end of EQ means far more than adding a C, or any other letter from Mercedes-Benz’s alphabet code. After all, the S-Class is touted to be the best car in the world, and it even won Luxury Car of the Year at the Motoring World Awards 2022. So, is the Mercedes EQS 580 4MATIC worthy of the S? To look at, I’d say yes, to a certain degree. 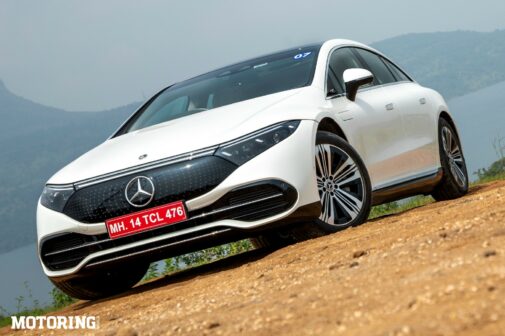 It’s long, in that limousine-like way, and has the girth, and low-slung sedan appeal, to look bold, yet sporty. However, it doesn’t quite have the bold, yet regal luxury barge feels you get from the S-Class. While I do get some of that boldness from the tri-arrow logos in that black grille, and the 20-inch rims, and I like the coupe-like silhouette, it doesn’t feel as stately. Nonetheless, the design works quite well, and I particularly like the intricately beautiful headlights and tail lights, and how they’re connected by LED light bars. 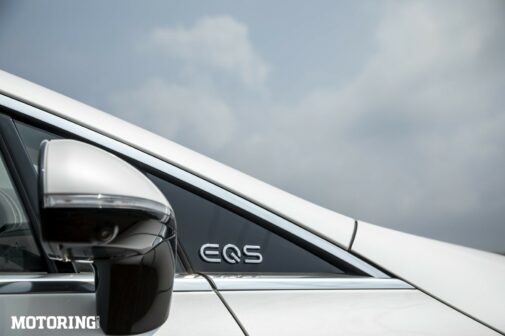 Overall, I get the impression of something that’s sporty, not opulent. On the other hand, the dynamism and sleekness do add another feather to Mercedes’ cap — with a drag coefficient of 0.20, the EQS is the most aerodynamically efficient production car in the world. Those flush-fitting door handles also play a part in that, as does the dainty, but a useful rear spoiler. Don’t get me wrong, I like the way the EQS looks, but I don’t think it gives the same vibe as the S-Class. 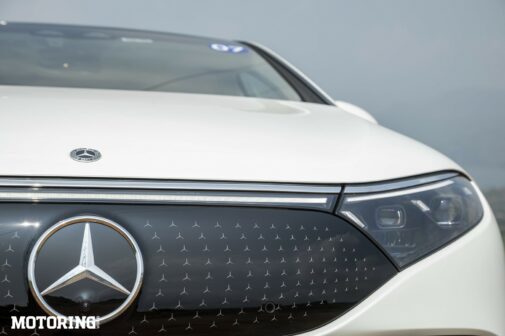 That doesn’t change once you step inside the EQS. Yes, the cabin is most certainly plush, as the Neva Grey and Balao Brown theme inside feels premium, as does the Nappa leather on that large, button-heavy (yet intuitive) steering. It’s that massive expanse of screens — there’s three under 56 inches of glass (instead of, you know, a leather-covered dashboard). It’s quite eye-catching, but not always in the best way. On a sunny day, whatever is outside will reflect on the glass surface, which makes it seem like something is moving on the periphery of my vision. 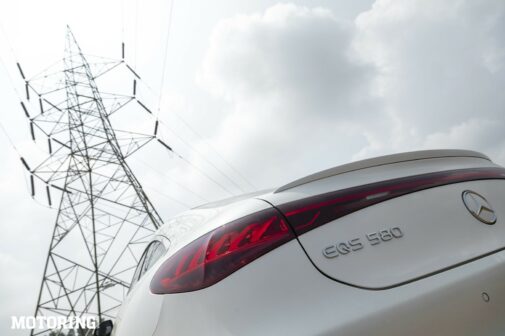 The screens themselves are easy to use, responsive, and clear from whichever angle. They run on the latest MBUX software, and it’s extremely hard to find fault in the way anything works. However, I may be in the minority here, but I do feel the 12.3-inch screen for the front passenger is a bit excessive, and don’t get me started on the sheer size of the 17.7-inch central touchscreen. However, it’s quite indicative of the future, and I’m, like I said, in the minority when it comes to this sort of screen domination. I’m sure the Indian audience will love it, though. 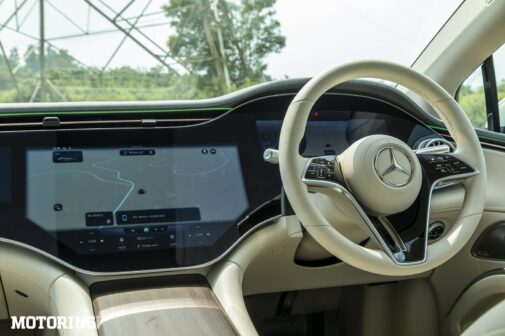 What they’ll also like is the level of comfort the seats offer. The rear seats are a bit on the lower side, but the space for four is ample. It’s not as roomy as the S-Class though, and that’s despite only having a 6 mm disadvantage in wheelbase length. Still, those comfy rear seats do recline, and they get cooling and heating. The front seats are even better than the rear ones, and even get memory, seat kinetics, and massage functions. All in all, the interior of the EQS is a nice place to be in. 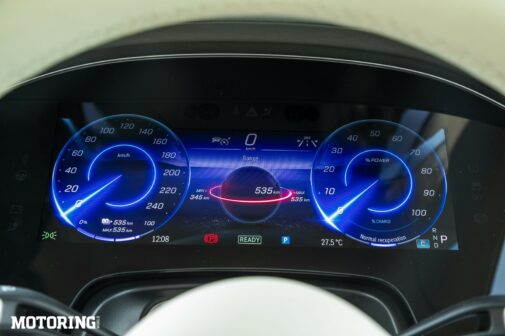 Another aspect that I found mighty comforting was the range I saw on the 12.3-inch driver display and the crystal-clear HUD. For once while driving an EV, I was completely unconcerned about reaching the shoot location, conducting our shoot, getting in some driving time, and reaching the waypoint Mercedes had set for this drive. Having driven for 50 km, and having had the motor running for the still and detail shots for about 45 minutes, the maximum range was still 535 km. 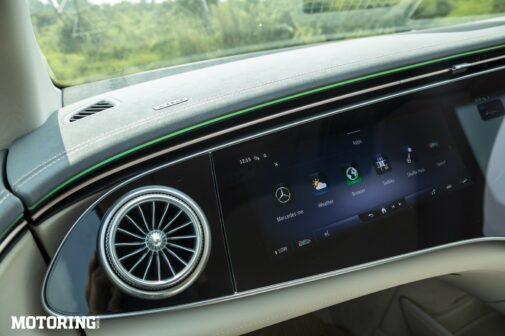 Mercedes is especially considerate by also showing a minimum range — in this case, it was still a more than abundant 345 km. It may not be the 857 km that ARAI says, or even the 677 km claimed on the WLTP cycle, but a worst-case scenario of just over 400 km in the real world is pretty good, and range-anxiety alleviating. And you can always use Eco mode to eke out every last bit of distance from that massive 107.8-kWh battery pack. This can be charged from 10-80 per cent in 10 hours using a standard 11-kW AC charger, while a 22-kW charger halves that time. 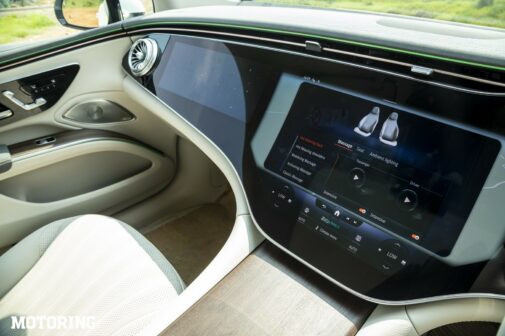 One way in which the EQS does feel like the S-Class is the silence inside and outside belies the quickness and speed. The two electric motors — one on each axle, simulating all-wheel drive — put out a total of 516 bhp and 87.19 kgm of peak torque, and all that torque is instantly available at the push of a big toe. This near-2.6-tonne limo guns off the line like a startled cat, hits 100 kph in a scant 4.3 seconds, and blasts past 200 kph not long after. Stick it in Sport mode and there’s even a slightly exciting whirring sound that adds some drama. 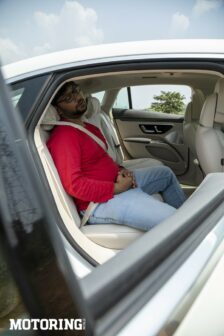 In spite of all that power, the EQS is quite easy to drive, its size notwithstanding. Bumper-to-bumper traffic and meandering drivers on the highway will see the autonomous emergency braking kick in at inopportune moments, but other than those specific situations, the EQS can handle nearly everything India’s roads can throw up. There’s even a handy button to raise the suspension for those particularly large bumps. Speaking of the air suspension, it is really one of the best in the business, ironing out undulations (sharp and continuous ones, too) to a degree where you feel like you’re riding on actual air. 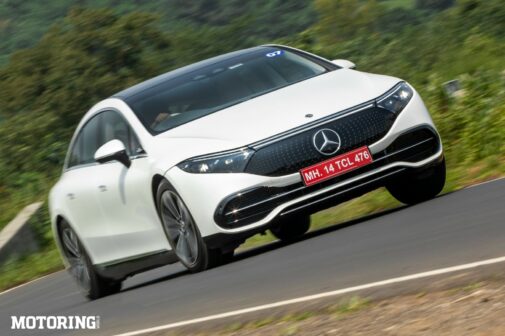 It somewhat surprised me that even in Sport mode, the suspension allowed for a bit of body roll, though that low centre of gravity made the EQS feel quite planted, as did the four-wheel steer system. In fact, making three-point turns was not a problem, despite the 5.2 m length. A 10.9-m turning diameter is excellent for something this size when one considers that a Honda City has a 10.6 m one. At speed, the four-wheel steer provides excellent grip and the confidence to push hard. It’s too bad only the first 100 customers can avail of the rear-wheel steer at this price, as it’ll be available as an optional extra after. 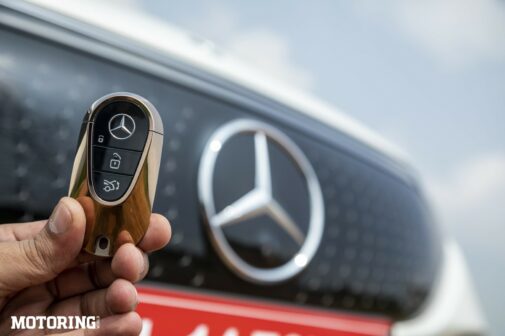 To go back to the original question, of whether this all-electric sedan is worth the S suffix, I’d have to say it seems like a bit of a middle-ground car at the moment. While it is the most luxurious EV you can buy right now, and the one with the highest range, it’s not quite at the level of the ‘best car in the world’. The Mercedes EQS is still a brilliant EV, though I feel there’s something to it that doesn’t fill my senses quite right. There’s a sense of an appliance or a gadget, rather than a car, to the whole package, one that makes me draw parallels to the latest iPhones. 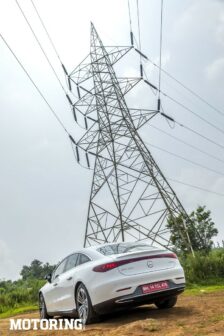 They’re both quite expensive (surprisingly, this locally assembled EQS costs Rs 5 lakh less than the ‘base’ S-Class), have large screens, are playthings first, and give off that sleek, shiny, expensive atmosphere. Neither is for everyone, but those who do have one will have bragging rights. In fact, those eco-conscious buyers will love the EQS as the recycled and renewable raw materials used amount to more than 80 kg. The EQS is for those who want to crow about their eco-friendliness, and do so while swaddled in E-Class-level luxury, and Starship Enterprise-level sci-fi tech. This EV is also the first real answer to range anxiety, and I hope it’s not the last.