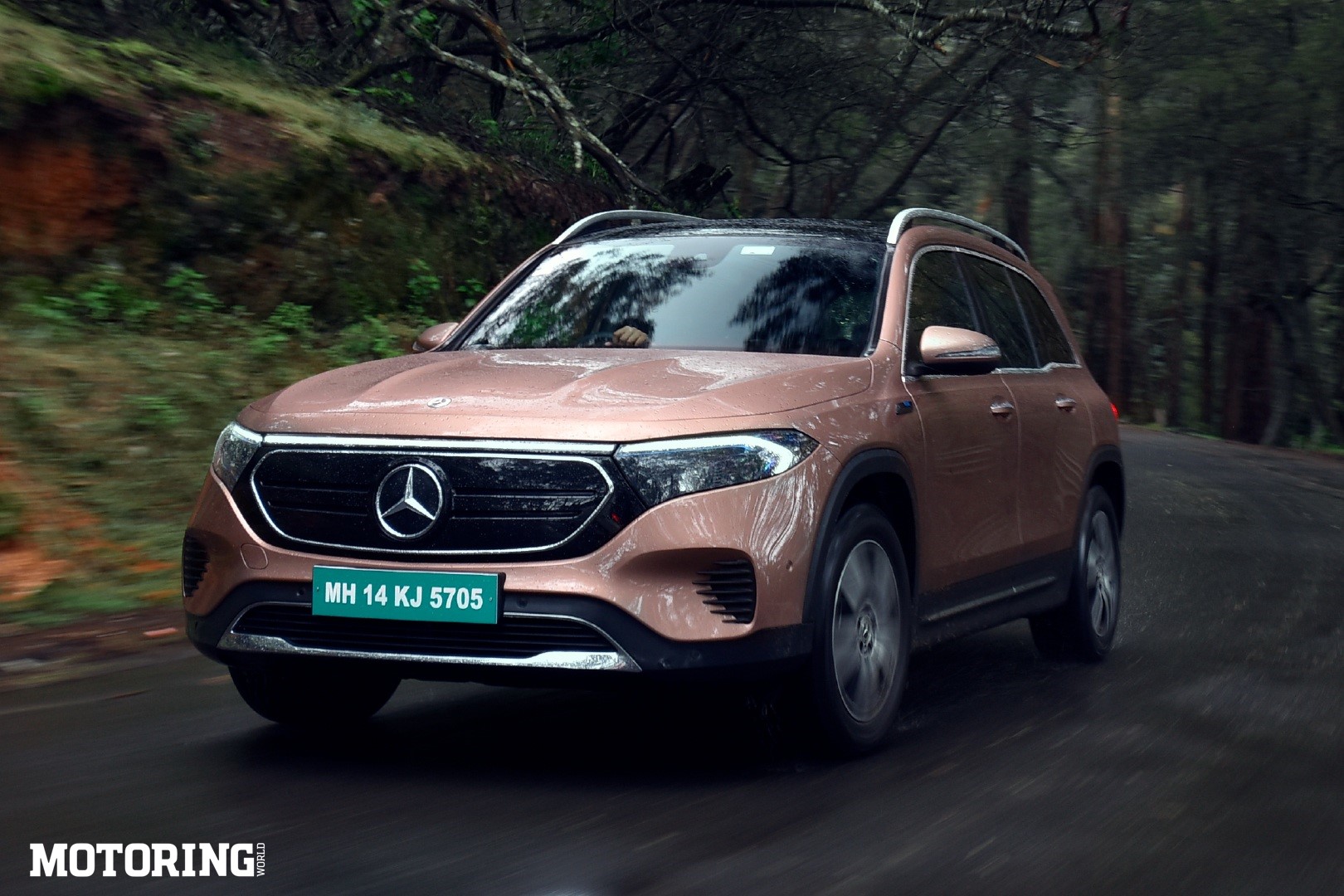 It’s no secret that electric vehicles are the in thing in India, and an impressive array of them are available, catering to every budget, need and want. You can buy everything from a tiny urban runabout to a fast-and-furious sportscar, but if you wanted an electric, seven-seat people-hauler you were curiously out of luck — until now. The Mercedes-Benz EQB is essentially the electric version of the seven-seat GLB that you will read about elsewhere in this issue, and both cars were conveniently made available during the media drives in the hills of Kodaikanal (well, it would have been odd had they not, since Mercedes-Benz India was launching them simultaneously). 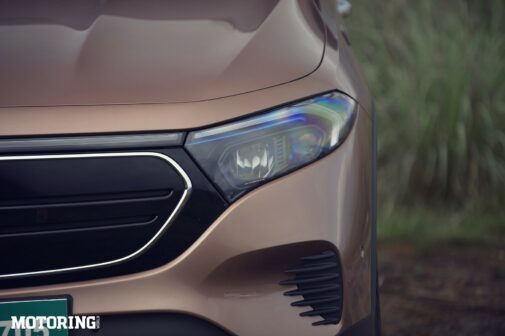 Here’s the low-down. Mercedes is betting big on EVs, and it feels that there’s plenty of scope for them in the upper echelons of the price game. The EQB, for example, will likely come in around Rs 75 to Rs 80 lakh, which isn’t chump change, but it will be a bargain compared to the giant EQC (I’ve touched upon Merc’s confusing alphabet game elsewhere in the issue, so I won’t go into it again). It’ll be a part of Merc’s growing EV range, consisting of cars like the EQC and the EQS, and will duke it out with competition from the likes of BMW, Volvo and even Kia — but it’ll be the only one offering seven seats. 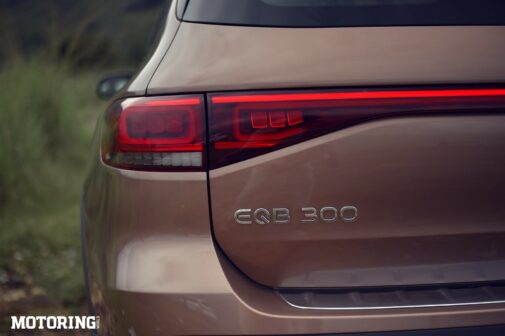 The EQB wasn’t designed from the ground up as an EV and is a conversion, as it were, of the GLB. That meant that the designers didn’t have too much room to play around with, but what they’ve managed nonetheless is quite pleasing to the eye. It looks a lot better in the metal than in pictures, and the awkwardness of its face kind of disappears once you’re standing in front of it. There’s a smoothness to the headlights and the grille, and the light strip connecting the headlights looks rather cool. The bonnet is reasonably muscular and decidedly non-EV in appearance, and in profile the shoulder line and wheel arches are pretty substantial; the five-spoke 18-inch alloys are aero-optimised and look good as well. At the back, the tail light spans the width of the tailgate and lends the car a futuristic look. In truth, this is a better-looking car than the GLB; it’s longer as well, although it isn’t as wide or high.

The cabin doesn’t stray far from the GLB’s template; in fact, you’d be hard-pressed to find differences. The twin 10-inch screens take pride of place, with the same MBUX system and functions; the flat-bottom steering wheel also has small touch controllers, alongside the touchpad between the front seats. You’ll find the same features here — climate control, Apple CarPlay and Android Auto, wireless phone charging, ventilated and powered front seats with memory, ambient lighting and other doodads. The build quality mirrors the GLBs, too, with everything in your line of sight looking great and the stuff below that looking a notch below in terms of quality.

There are minor differences in the seating arrangements over the GLB, however. The front seats are the same, and give you a superb view of the road, and the second row is roomy and airy, with the added advantage of the transmission bump having been removed, thus giving the middle passenger a more comfortable seating position. Admittedly the floor is higher because of the battery extruding into the cabin, so your feet will sit a bit higher, but this isn’t at a deal-breaking level because the H point has been raised to make up for this. The third row remains just about useable for two adults and is, again, best left to children. The battery also eats into cargo space, resulting in just 110 litres of space with the third row up, 465 litres with it down and 1620 litres with the second row down as well. The EQB works best as a five-seater, to be honest; the two extra seats are a bonus for when you really require extra seating room.

India gets one EQB variant — the EQB 300 4Matic, which uses two electric motors to generate 225 bhp and 39.8 kgm of torque (an EQB 350 is available abroad that makes 288 bhp and 53 kgm). Both versions have standard all-wheel drive and a 66.5-kWh battery, along with a claimed range of 423 km (WALT); in real-world conditions, expect something of the order of 320 km, which is acceptable but not great. The battery sits beneath the seats and can take up to 100 kW of charging juice in its 420-volt architecture. Merc claims a 10-80 per cent charge time of 32 minutes with a 100-kW DC fast charger, and a 6h 25m charge time for a 10-100 per cent charge with an 11-kW AC charger; an AC wall box comes free with the EQB.

Driving this EQB is an enjoyable, fuss-free process. It’s an EV, so there’s all that torque available from the get-go, but the acceleration on offer doesn’t pin you back into your seat like, say, the Volvo XC40 Recharge does. Things are more gentle here, which is probably a good thing in a car meant to transport seven people; continuous whiplash acceleration will certainly leave your rear-seat passengers in a foul mood. The car sprints to 120 kph very smoothly (0-100 kph takes roughly 8 seconds) and then acceleration tails off; top speed is restricted to 160 kph. A drag racer this is not; a very enjoyable city car and relaxed highway cruiser are what it is. 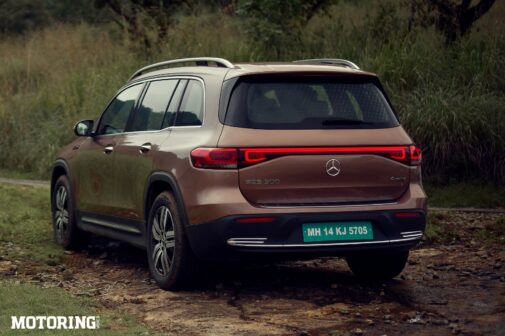 The drive modes — Eco, Comfort, Sport and Individual — make noticeable differences in the way the EQB accelerates and steers, and you can adjust the levels of regenerative braking via the paddle shifters (a true one-pedal mode is absent, though). The brakes combine quite seamlessly with the regeneration, so there’s no herky-jerky to be felt. The driving experience is hushed, other than tyre and wind noise, and Merc hasn’t added any artificial ‘engine’ noises. The ride on offer is excellent, smothering whatever bad roads I encountered. With a sharply-calibrated steering wheel, minimal body roll and plenty of grip from the tyres, handling is on the entertaining side as well. The all-wheel-drive system is absolutely on-point, and you can’t really tell which of the motors is doing the grunt work while you’re driving; there’s one at each axle, with the rear one being more powerful. 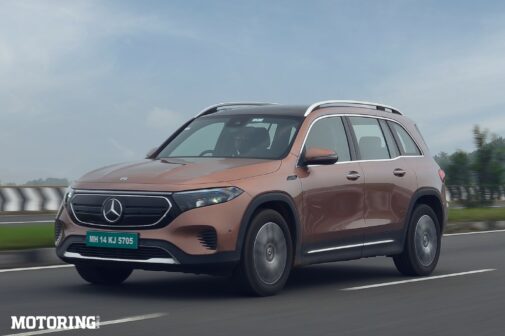 Having driven the EQB and its ICE counterpart, the GLB, back-to-back, I have no hesitation in declaring that I liked the EQB better — it just feels more like a Mercedes than its cousin. It’ll probably cost around Rs 80 lakh, so whether it’s Rs 20-odd lakh better than the GLB is for you, the buyer, to decide.