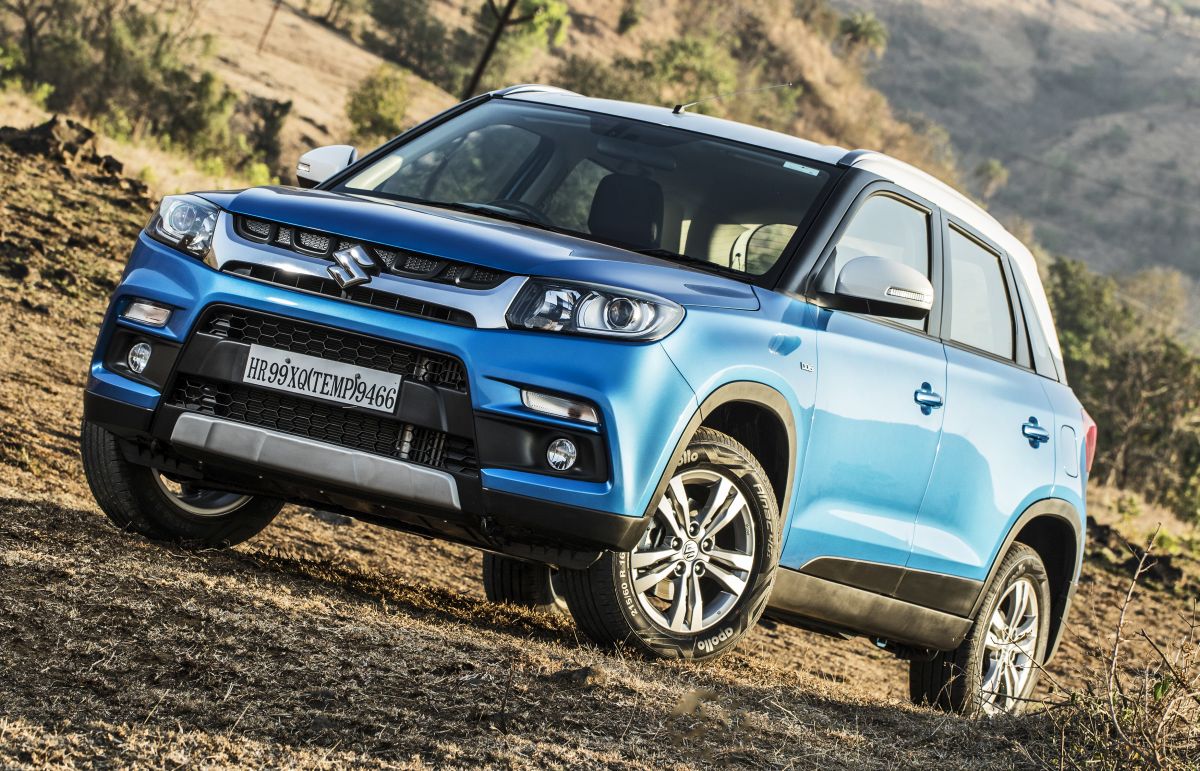 It isn’t often that us jaded auto journalists come away impressed with a new product. However, every once in a while there comes along a product which is pleasantly surprising. The Vitara Brezza is one such product. Here’s why.

Not at all. It’s as Japanese as sake and sushi, but Suzuki has chosen the ‘Brezza’ name (stop giggling, all you teenage boys) from the Italian word for ‘Breeze’. The ‘Vitara’ name is a link to the previous premium SUV model we’ve seen from the brand, we suppose, because the Brezza and the international Vitara have nothing in common except for their name and the fact that they’re both Suzuki SUVs. There’s also a lot of European design influence in the vehicle. The nose is a bluff, high unit with a large horizontal chrome bar connecting the headlamps. The black part of the grille has large ‘U’s above the chrome strip that are reminiscent of the Mahindra KUV 1OO. The bumper is a large unit with a lot of elements – there’s the central aperture to let air to the radiator and intercooler, the turn signal indicators above the fog lamps, and the faux skid plate at the bottom. It is a well-designed unit that doesn’t look its height. The headlamps are a combination of projector units for low beam and bulb-and-reflectors for high beam, and there are LED running lamps that Maruti terms ‘bullhorn’ lamps. The headlights are powered by regular tungsten filament bulbs, unlike the Xenon bulbs of the Baleno.

From the side, the Brezza has a little of the Swift in the roofline and the slope of the A-Pillar. However, there’s a whole lot more SUV in the squared-off wheel arches and the air between wheel arch and tyre. The wheels are a five-spoke split spoke design in regular silver; no fancy diamond-cut finishes here, just regular good design. The car you see in these pages is a top-spec variant, which means you have the option of the two-tone paint scheme. It is very fetching (and very European; Brit, to be precise) and combined with the blacked-out pillars, makes for a very interesting floating roof design. The white roof also takes a fair amount of visual weight off the top, and makes it look wider and more aggressive than it really is. The single-colour paint schemes look too serious in comparison. There’s also an attractive yellow/white combination, but the contrast of the blue/white appeals more to us.

We can truthfully say that the Brezza is the most proportionate of the sub-4m SUVs by a country mile. There’s a generous rear overhang compared to the others, and a slightly raked rear screen adds to the effect of sportiness. Horizontal tail-lamps spill over onto the tailgate just like the Ford EcoSport, and there is a large chrome strip between the tail lamps and above the number plate recess, much like the Duster. The bottom of the bumper rounds things off with a matt black bottom with silver skid plate. The hatch is hinged at the top, and the spare wheel is under the boot floor like a normal car, which makes things so very convenient.

Overall, the Brezza is one of the most proportionate sub-4 metre vehicles in the market, and while it isn’t as exciting as the Baleno, it certainly takes advantage of its European influence. Of course, there’s a little Italian influence under the bonnet as well…

ARE THE INTERIORS EUROPEAN AS WELL?

The layout remains tailored to a right hand drive market, so the controls will always be where you’ve found them in Suzukis. However, the European influence is in the all black colour scheme. There’s no leather upholstery (and we’re thankful for that) but the focus seems to be on a minimalistic, quality-driven layout. There’s the steering wheel that’s making its way across the Suzuki range, from the Alto all the way up to the Ciaz. There’s the audio head unit from the Baleno, with features like the capacitive touchscreen and Apple CarPlay connectivity. What are new are the climate control’s buttons, the AC vents, and the touches of silver in the interior. We didn’t like the position of the Start/Stop button, it’s too close to the parking sensor on/off switch. Another quirk is the handbrake being on the correct side for left-hand drive markets even though the model is developed in India. We also don’t like that at least a few switches carry over from the Swift – they’re ten years old, Maruti, retire them already! What is nice are the twin gloveboxes with the top one being a cooled glovebox.

The driver’s seat gets height adjustment, and the rear seat occupants get a central pull-down armrest with twin cup holders in it. We also appreciate that both front seat backs have pockets on them, and there’s even a curry hook high on the back of the driver’s seat. There’s enough legroom for two fairly tall people in both rows, and shoulder room is good. The boot is also appreciably large at 328 litres and the rear seats split 60:40 and fold if you need more luggage space. The company claims the rear seats fold flat for a completely flat load bay, but that didn’t happen on our test car.

What we’ve not seen before on a Suzuki are the instruments – the basic design is squares with rounded corners (the word ‘squircle’ was used at some point during the presentation, we kid you not). The layout is clear and legible, and there’s quite a bit of information available, although not at the level of the Baleno, but the basics are there. Our favourite feature is the subtle gearshift indicator, that turns into a dot if you’re in the right gear and points either upwards or downwards if you’re not. The backlighting of the instrument cluster can be changed to one of many colours to suit the exterior paint – or your mood, for that matter. This is a first in the segment and Maruti seems to be very excited about it. We’ve usually found this feature on aftermarket audio head units, but have used it very little thus far.

YOU SPOKE ABOUT A LITTLE ITALIAN UNDER THE HOOD…

Yes, he’s been there a while, and his name is Luigi. We’re kidding – it’s the 1.3-litre DDiS diesel that’s under the Brezza’s hood. The same Fiat 1.3 Multijet that Suzuki has sourced, adapted and somehow made better than Fiat could in its products. Here it makes 89 bhp and 20.4 kgm. That’s an adequate amount of shove for the 1197 kg Brezza. As always, there’s turbo lag below 2000 rpm, but move beyond that and things get a whole lot more exciting, all the way up to 5000 rpm. They also get noisy if your right foot is to the floor, but during normal operation with part throttle and normal revs, the engine is impressively silent inside the cabin. There’s no questioning its age when outside the car, though, the gravelly voice of the DDiS 200 announcing to all that you’re running on diesel oil. It’s a similar situation with the gearshift – in isolation, it is perfectly adequate. However, compare it to the slick unit of the EcoSport and it feels notchy, especially when you get aggressive with it. The engine, while dead reliable, is as old as those switches we mentioned earlier, and we’re going to say the same thing about it to Maruti.

It’s an SUV, so you can’t reasonably expect it to handle like a car. That said, it’s got a very grown-up ride at low speeds, absorbing pretty much everything with no complaint. Up speed, though, and things aren’t as rosy, the tall body (198 mm ground clearance here) and soft suspension not agreeing well with aggressive driving. The main culprit here, though, is the Suzuki electric steering system’s feel – there’s a little bit of play in it that is very noticeable at speed, and this undermines confidence. That said, we don’t expect a lot of Brezza customers to make high-speed intercity runs; but if you do, and you want to do it in an SUV, go to the corner with the Blue Oval in it.

SHOULD I GET ONE?

At the time of the Brezza’s launch, this was an easy one. There was quite a bit of air between the Brezza’s price and the EcoSport’s. However, Ford has reacted since and now there’s less than Rs 25,000 between the two top-spec diesel variants of the two. What the Brezza doesn’t have is a petrol engine (so the three of you reading this for the petrol, go get the Ford) or an automatic gearbox (that takes care of the one person reading this in the hope of getting his petrol automatic SUV).  Here and now, the Brezza has space, reliability, efficiency, and a large boot with more practical access to it going for it. There also is a massive accessories program at the dealer level that Maruti says will allow no two Brezzas to look the same. Where it falls short is in refinement at high revs, and highway manners. We don’t think this is a deterrent for the urban SUV owner – and if the bookings are any indication, it is going to be a hit and deservedly so.