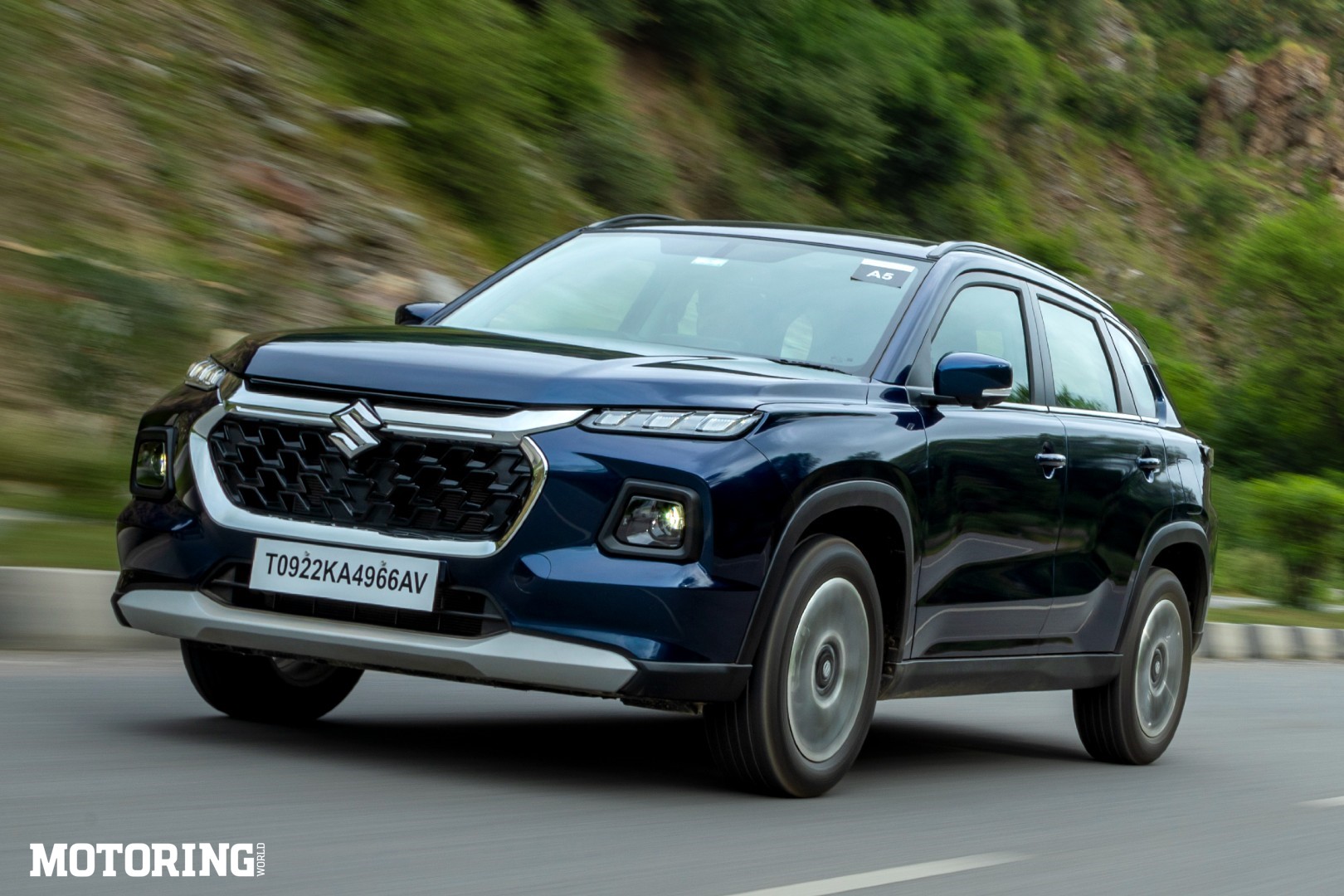 The Maruti Suzuki Grand Vitara — now that’s a name that brings back memories. Specifically, memories of a rough and tough, powerful, gas-guzzling, and go-anywhere SUV that Maruti had in its stable back in 2007-2014. The older Grand Vitara was one of the few black marks that the Japanese brand has in terms of sales — the Indian market wasn’t mature enough to consider Maruti as anything but a budget carmaker, and we also baulked at the single-digit mileage figure and high price tag (due to its CBU nature). 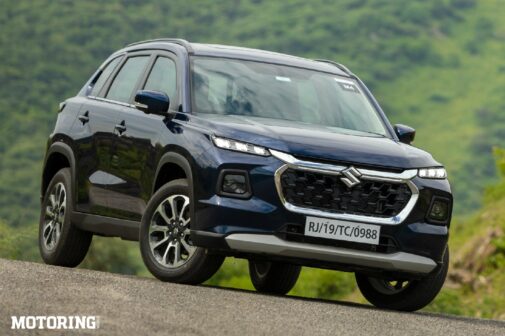 Nearly a decade later, Maruti Suzuki is giving the nameplate another go, and this time, it’s got qualities that typify the brand. It’s probably the most fuel-efficient SUV to be introduced in India, and it’s being manufactured locally (at Toyota’s Bengaluru plant), which means the price tag should be far more within reach, and availability of spare parts will not be an issue. In fact, Maruti’s taken it one step further and is introducing two segment-first technologies — hybridisation and all-wheel drive. However, the new Grand Vitara is entering what is arguably the most competitive segment in the Indian market, that of the midsize SUV. 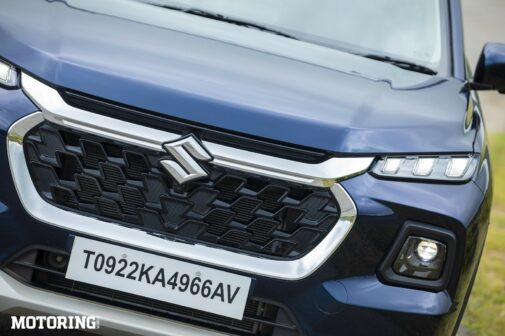 In something of a departure from the squared-out design of the older SUV, the 2022 Grand Vitara looks sleeker, thanks to those slim LED DRLs that look a lot like the Baleno’s headlights. However, the rest of the SUV maintains that bold, slightly squarish aesthetic. That large chrome-lined grille and the trapezoidal headlights underline that boxy styling, and those 17-inch dual-tone alloys and blockish wheel arches also serve to highlight that theme. There’s a sense of incongruity between the lighting used at the front, and even the rear, and the overall cuboid theme. That futuristic LED light bar connecting the slim LED tail lights looks rather fetching, but I felt like it didn’t gel properly with the overall styling. 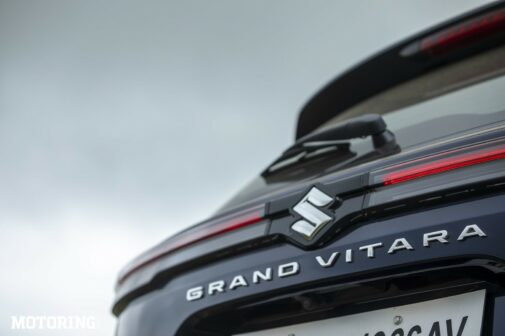 Still, many will like the way the new Grand Vitara looks like a proper SUV, if not the most fashionable one, which is in-line with the history that Maruti has with this body type (I’m looking at you Mr Brezza, and you Mr Gypsy). The high ground clearance and long beefy bonnet also help in that regard, but the latter hampers the view out of the driver’s seat a little, especially on an incline. Speaking of the seats, those leatherette-covered front and rear ones are quite well-bolstered and offer very good support, though getting in and out of the Grand Vitara requires a long stride. Otherwise, you’re likely to get your calves stained with whatever the SUV has picked up along the way.

You do feel like Maruti has paid quite a lot of attention to making passengers feel like they’ve bought a premium car — the leatherette finish on the steering, dash, and doors feels nice to the touch, and gives the cabin a plush feel. On the other hand, the fabric covering for the panoramic sunroof is inadequate, and lets the sunlight in, heating up the cabin. This is not an issue in the hybrid version as it gets loud, yet very efficient, ventilated seats, but the mild-hybrid Grand Vitara has to rely solely on the automatic AC. 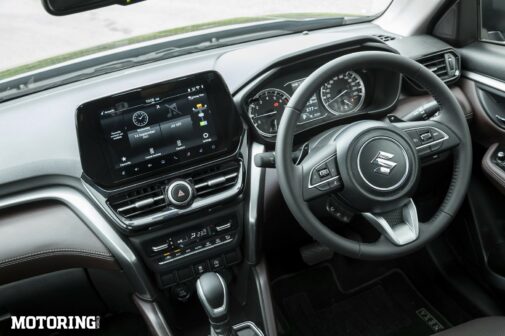 Other features you’ll get on the Grand Vitara hybrid, but not on the mild-hybrid, are the heads-up display, the 7-inch digital instrument cluster, and wireless charging. However, the black and brown interior (with those silver accents) seen on the mild-hybrid model looks more visually engaging than the all-black (with gold accents) interior you see on the hybrid. Incidentally, the hybrid is also said to get a better sound system than the ARKAMYS one on the mild-hybrid, but I honestly could tell the difference in our short stint with the Grand Vitara.

The major difference between the mild-hybrid and the hybrid is of, course, the powertrain. Neither version is particularly powerful per se, but the Grand Vitara with the 102-bhp 1.5-litre mild-hybrid petrol engine is the least powerful model in the midsize-SUV segment. Even with the smooth-shifting 5-speed manual gearbox, the 13.95 kgm of torque produced feels inadequate to hustle around this 1185 kg SUV. On an upslope, stay in the lowest gear possible to make steady progress, otherwise, it’ll bog down. The 6-speed torque convertor auto seems to sap power from the already underwhelming engine, making progress even slower, despite the use of the paddle shifters. Sure, initial acceleration is decent, but there’s really nothing beyond that. 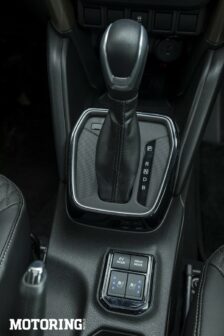 Considering all this, it came as something of a surprise that this 1.5-litre four-cylinder engine seemed more than adequate when we were given the AllGrip (AWD) version to chuck around a curated off-road track. The excellent AWD system is only available with the mild-hybrid powertrain in manual form, and it worked beautifully in the slush pit, on steep inclines and descents (where the hill-descent control came in handy), and even through the articulation stretch. I’d love to try this one on some tarmac, and see if there’s a hint of this enthusiasm there as well. I have to admit, this is the most exciting version of the Grand Vitara by far, though it’ll likely be the slowest-selling version.

The version that is likely to take a big bite out of the diesel midsize-SUV market share is the hybrid one. Although the tech has been borrowed from Toyota, it is perfectly integrated into this Maruti, making it the most frugal SUV in the country that runs on petrol — the ARAI rating is 27.97 kpl, though the real-world figure of over 16 kpl is still laudable. The 114-bhp petrol-electric model definitely feels quicker than the mild-hybrid Grand Vitara, though it still isn’t particularly sporty. Sport mode also livens things up a bit, but there’s no getting around the fact that Maruti is much too focused on extracting the maximum distance out of every litre of petrol. 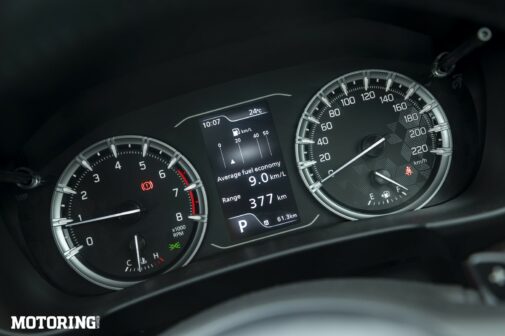 And that’s a shame as Suzuki’s Global C platform is quite stiff, and can definitely take on a much more motive force. Both on-road and off-, the chassis’ stiffness shines through, making you feel secure, and even providing some level of driver involvement. The suspension is on the softer side, the consequence of which is that the ride quality is sublime. The Grand Vitara doesn’t lose its composure even over sharp ruts, and, in general, the cushioning is excellent.

This also means that it isn’t the best handling SUV for sure — it does feel like it would edge out its Korean rivals in this department, despite the numb, yet direct steering, but certainly not attain the same level as Skoda’s and VW’s offerings. It should be noted that the Grand Vitara hybrid is over 100 kg heavier than the mild-hybrid, and does feel more composed, and lends a greater degree of confidence, through a set of twisties.

One aspect that Maruti Suzuki needs to take notice of is the NVH levels. While the V (vibrations) and H (harshness) are above par, a lot of noise creeps into the cabin. In the mild-hybrid automatic version, the transmission whine from the 6-speed gearbox is quite audible, and don’t get me started on the thruminess of the petrol engine in the hybrid model. 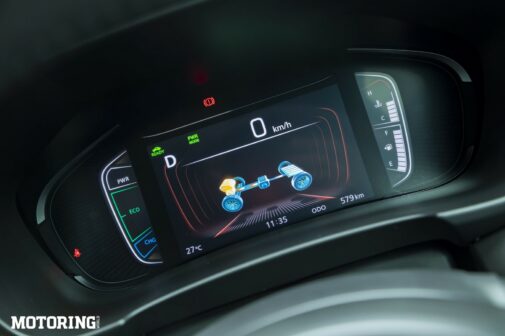 Yes, Atkinson cycle engines sound gruffer than their standard counterparts in general, but everyone on the road will know when that 91-bhp three-cylinder petrol engine kicks in to assist the high-pitched 79-bhp electric motor. It’s almost as if there’s a generator, not an engine, underneath the bonnet. The all-round discs are also more than decent at bringing the SUV to a halt, but you can surely hear the regenerative system working to replenish the battery. Improved sound insulation should be on the top of the list for the eventual Grand Vitara facelift.

While this characteristic is contrary to the Grand Vitara’s premium image, I predict it won’t hurt Maruti Suzuki’s sales much. Driven in a relaxed manner, this new midsize SUV is quite comfortable, and frankly, supremely easy to drive. As I said before, the AllGrip version is the most fun, though likely to be the slowest-selling Grand Vitara, while the automatic and hybrid versions are likely to grab a significant portion of buyers’ interest in this segment. In fact, I wouldn’t be surprised if the hybrid version starts taking a bite out of the diesel midsize-SUV segment, as efficient and hassle-free as it is. 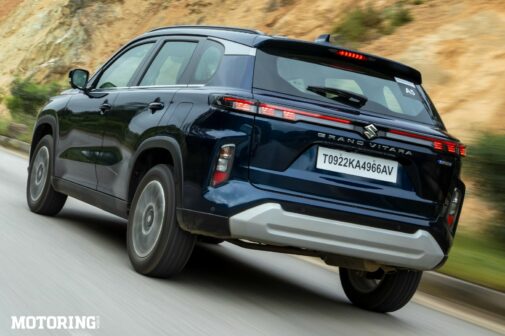 There’s no doubt this is another Maruti Suzuki that’ll sell, but it’s definitely not the same Grand Vitara I grew up knowing. It seems like a Maruti through-and-through, which is great for the brand’s beancounters, but for enthusiasts, this SUV lacks the ‘sport’ part. However, what the Grand Vitara will finally do for the Japanese brand is help it crack a segment it hasn’t managed to yet, and that’s downright commendable, especially with a competitive Rs 12-19 lakh, estimated, ex-showroom, price tag.