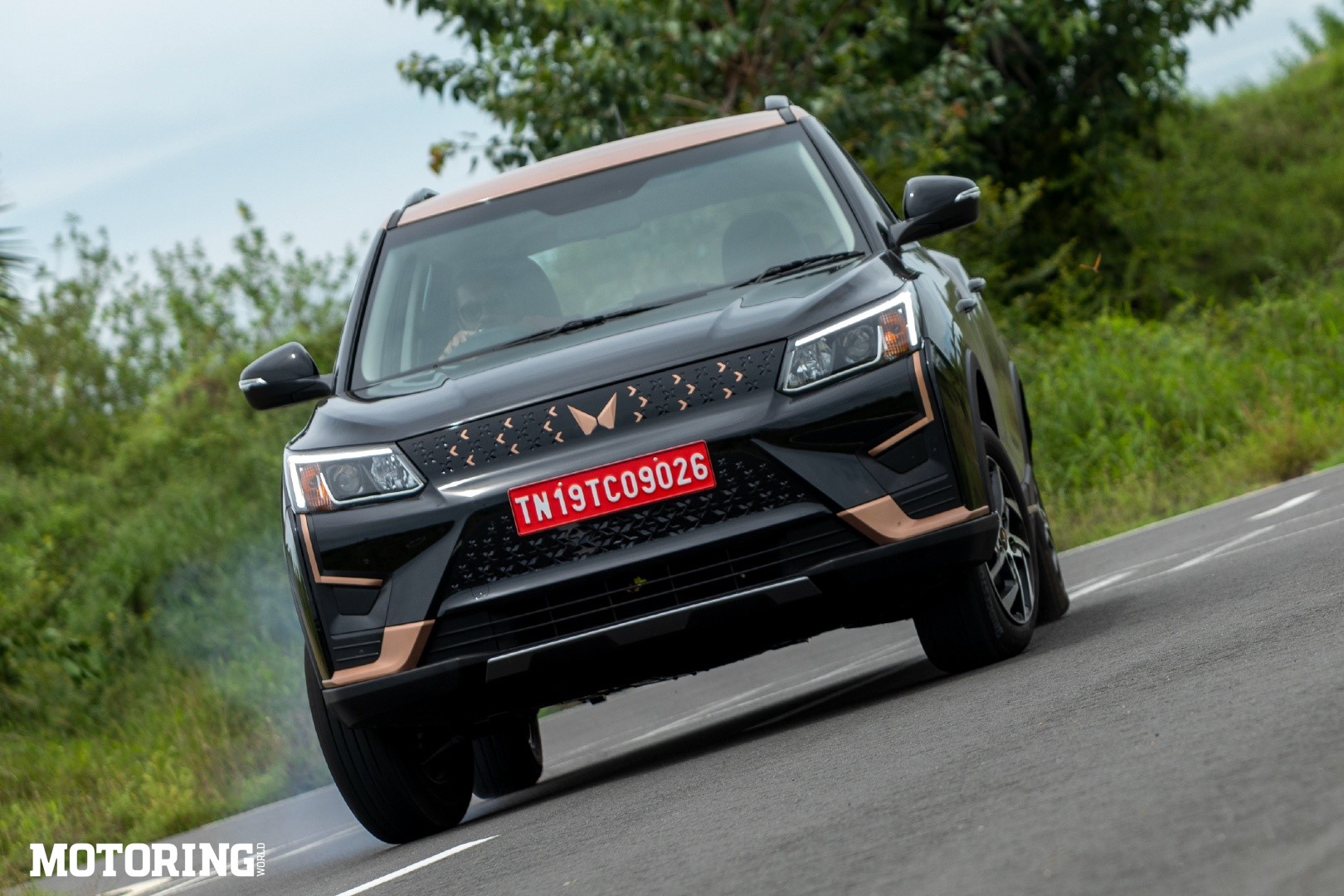 It had only been ten minutes since I sat in this one’s driver’s seat, but it was enough to convince me how high this car’s fun quotient was. I mean, that kind of feeling is usually experienced with expensive and powerful cars that carry a premium badge. But this one here is a pukka desi, claims a 0-100-kph acceleration time of 8.3 seconds, looks like a compact SUV, but is a midsize SUV, but drives like a sporty hatchback. In the ever-expanding world of EVs, this is Mahindra’s first all-electric SUV, the XUV400. 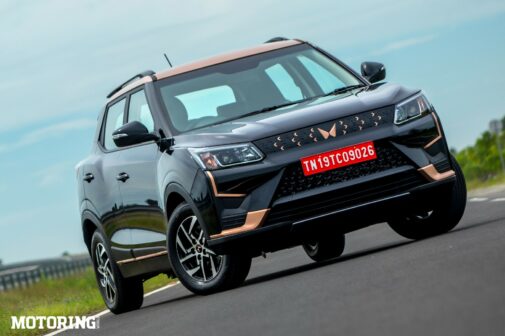 In case you aren’t aware, the XUV400 is not the first electric vehicle from Mahindra. Much before, when the concept of electric vehicles was very new and mostly unknown, Mahindra had the Reva, a compact all-electric car, that was pretty ahead of its time, and hence, also ended up living a short life. But it’s a completely different picture today. The XUV400 comes across as one of the latest examples in the EV market, which also makes it a strong contender to the bestselling EV and arch-rival, Tata’s Nexon EV. 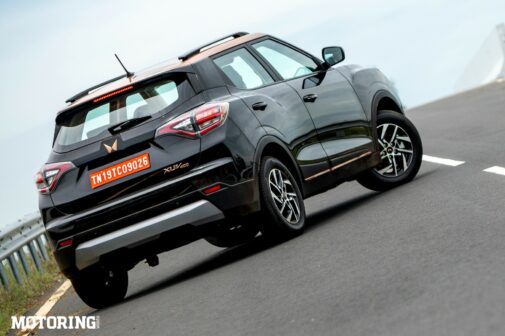 Okay, I know all you EV fans want to see a showdown between the two, but that will have to wait for now. Why? Because I was at Mahindra’s proving grounds — at the brand’s Chennai facility — with nothing but Mahindra cars in every direction. It is at this facility that Mahindra puts its vehicles through their paces, testing them to the absolute limits by simulating and recreating all possible driving environments from the real world. 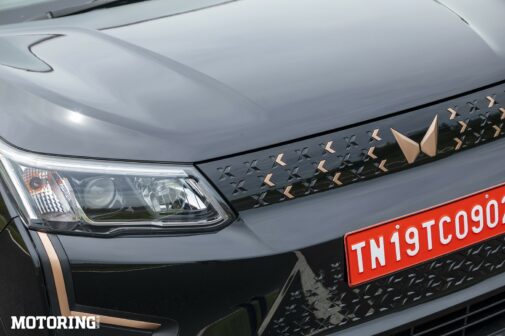 Before I head to the experience part, let me give you a quick lowdown on the Mahindra XUV400. Like the Nexon EV, which is based on its IC-engined counterpart, the XUV400 also borrows its underpinnings from the XUV300. But the Mahindra has an advantage here. The Nexon is primarily a sub-4 metre compact SUV, and hence, so is the Nexon EV. In the case of the XUV400, Mahindra has opted to utilise the original 4.2-metre length of the original donor car, the Ssangyong Tivoli. Two reasons for that — the first being, there is no benefit for a sub-4-metre electric vehicle in terms of taxes like there is for ICE vehicles. The second is to address the poor boot space in the XUV300 that has been an issue of concern amongst buyers. 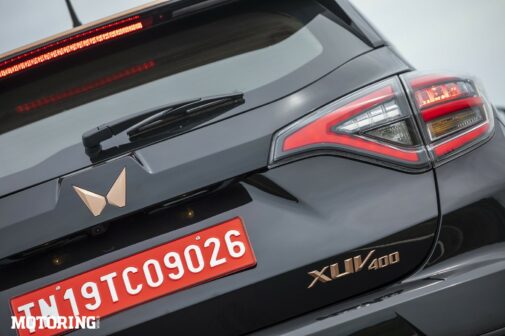 Compared to the XUV300, the XUV400 looks better than the former, especially from the rear section, as it looks a lot more proportionate, and not squashed. Besides that, on the outside, the XUV400 shares almost everything — the doors, bonnet, glasses, and other body panels — with the XUV300. To differentiate the XUV400 as an EV, it gets its unique highlights in the form of a new bumper, a blanked-out grille, new badges, and distinctive accents around the body. However, the most instantly recognisable highlight is the abundant use of copper-coloured body parts and accents. Besides the entire roof, other bits like the trims, badges, and logos are all finished in the copper shade, which, according to Mahindra, will be a signature highlight for their EVs going forward. 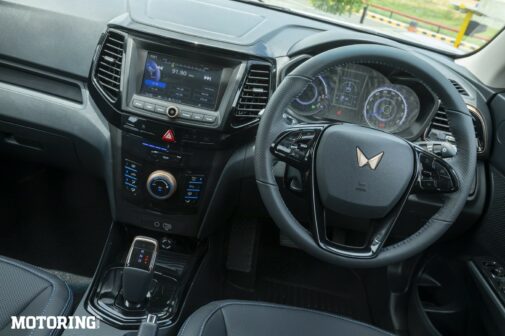 The copper theme continues in the interior as well, with many touch and feel components like the air-con vents, rotary dials for the stereo, gear lever, and some other bits getting the copper finish. In my opinion, the abundance of copper does get a little overbearing at first, but with more time spent in the cabin, one could get used to it. They are, however, a constant reminder that you are driving a Mahindra that is all-electric. 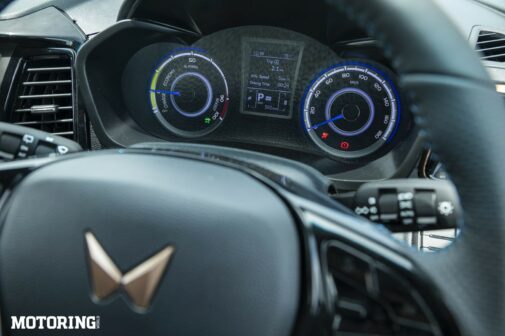 But, what the interior also reminds you of is the XUV300. I mean everything, from the dashboard, seats, and door trims, to the analogue dials for instrumentation, and the 7-inch infotainment unit (that looks overly outdated when other cars are getting much larger and better screens) is familiar. I wouldn’t have felt this strongly about it if the XUV700 and the Scorpio-N hadn’t featured such state-of-the-art infotainment units. 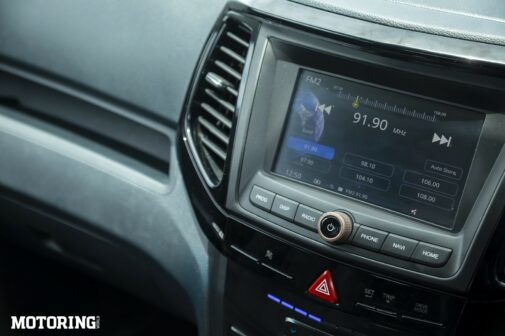 Apart from that, there are a few other things on the features list that have been skipped for the XUV400 but are offered in the XUV300. There are no fog lamps or parking sensors at the front, and gone are the rear air-con vents and dual-zone climate control system inside. In terms of accommodating the battery pack, Mahindra has cleverly lifted only the centre console and the middle passenger area to provide the required space for the battery, without having the other passengers compromise on ergonomics and comfort. 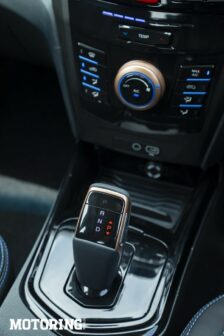 Now, to the fun bit. Mahindra had set up a bunch of activities to experience the XUV400 in different recreated environments. But before all of that, it was the high-speed oval track that was first on the agenda. The XUV400 is powered by a 39.4-kWh battery pack. Meanwhile, the motor it is mated to is rated to produce 147 bhp and 31.61 kgm of peak torque, which is impressive. For the best possible use of that power, it comes with three driving modes — Fun, Fast, and Fearless. And for the high-speed track, it had to be nothing, but the Fearless mode, to extract the maximum out of that powertrain. 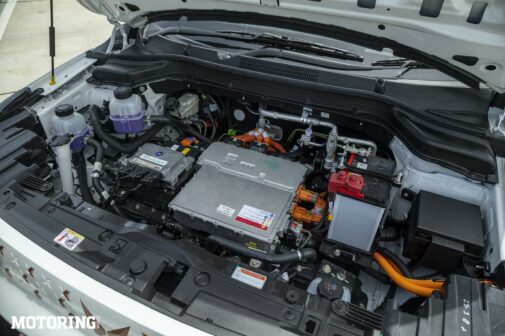 The proving track had two banked corners, and two long straights, forming a loop. The XUV400 is rated to achieve a top speed of 150 kph, but while driving on the track, it manages to breach it, before flattening out at 160 kph. Around the banked corners, we were informed to stick to the third lane — the fourth being the furthest — and not to exceed 120 kph through the corners. While I did abide by the instructions that were given, I just had to drive the XUV400 faster, and slightly beyond the third lane. It didn’t take long for the marshals to take note of what I was doing, which was quickly followed by calling out on the radio to reduce speed and come back into the allotted lane. 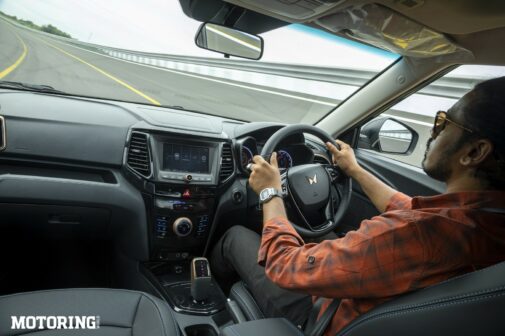 I did so, not because I simply wanted to, but because I was sure that the XUV400 would be able to do it without breaking a sweat. Using the same dynamics of the XUV300, which itself is a very dynamic car to drive, the 400 felt planted and confident at all times. Even the steering response felt just about right for the speeds I was doing. Considering it possesses phenomenal acceleration that even pushes you back into the seat for a few seconds, tops out at 160 kph, and drives around banked corners at 140 kph is a commendable thing, for a mass-market electric vehicle. 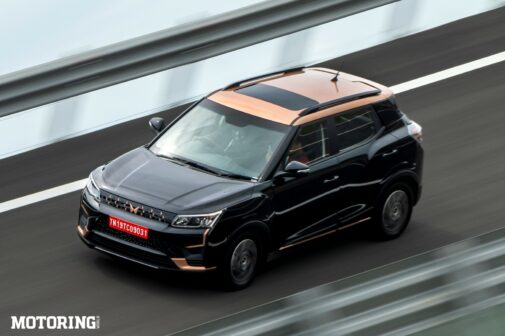 After all the fun at the high-speed track, the next bunch of experiences consisted of different real-world driving scenarios, comprising different types of corners, speed breakers, dips, underpasses, and ascending/descending gradients. Over here, while it wasn’t exactly like the real world out there, the XUV400 showed no signs of inability to take on the obstacles. In fact, since the cars that we were driving were pre-productions models, the traction control system remained inactive all the time. And that was the perfect recipe for smoking the front tyres, literally. In Fearless mode, it only takes a good dab of the accelerator to get those wheels spinning. In the other two modes, the throttle response is subdued, while the steering becomes lighter for easier manoeuvring. 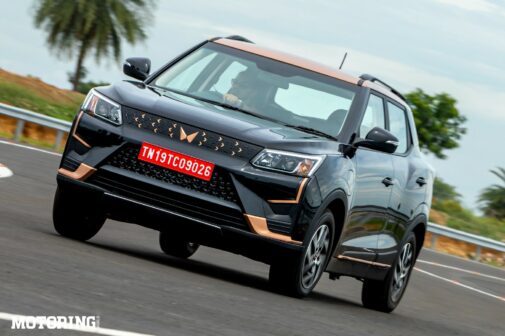 Despite the large battery pack that’s located underneath the XUV400, it rides comfortably like other IC-engined vehicles in the class. It rides on 16-inch wheels that are linked to the car’s monocoque chassis via McPherson struts at the front and twist-beam type rear suspension — both are equipped with Mahindra’s MTV-CL (Multi-Tunable Valve and Concentric Land) and FDD (Frequency Dependent Damping), which makes a significant difference in the ride quality. 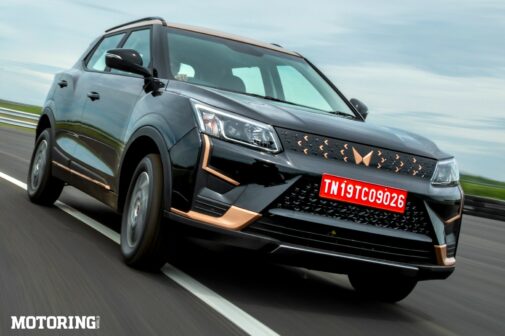 The company uses the same tech for the XUV700 and new Scorpio-N, which have performed well on our roads, out in the real world. Overall, the body roll is well in check, but due to the lack of traction control, and the given environment, it wasn’t possible to push the XUV400 as hard as I could. With all that power and torque instantly available, the car would easily understeer, stepping away from the intended line around a corner. 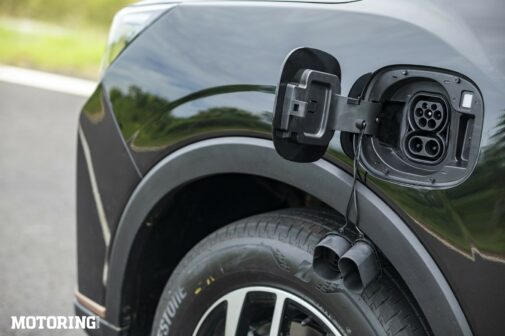 Now, since the XUV400 is an electric car, it is equally important to talk about aspects like the range and its charging. On a full charge, Mahindra is claiming an ARAI-certified range of 456 km. In real-world usage, if it even manages to offer somewhere under the 400 km mark, that will be great. The only way to confirm this will be when we get the car for testing later, once it’s launched. Coming to the part of charging, the battery pack can be charged from 0-90 per cent via a 50-kW DC fast charger in a matter of just 50 minutes. Meanwhile, with a 7.2-kW/32-A outlet, it will take six and a half hours to completely charge the battery. And lastly, with a domestic socket of 3.3-kW/16-A supply, it will take about 13 hours to fully charge the XUV400’s battery. 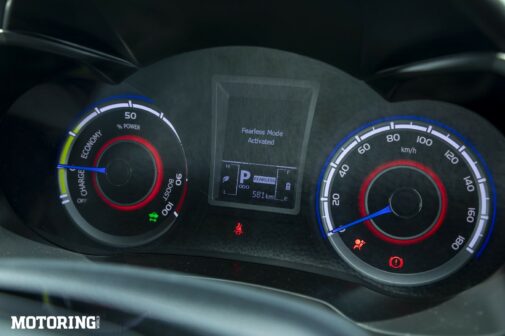 To sum up things, given the dimensions, features and powertrain, Mahindra is likely to slot the XUV400 in between the B and C segments of eSUVs. While the price reveal of the XUV400 will only happen in January next year, Mahindra will have to carve out a niche in the pricing department considering its closest rival’s highest attribute is its pricing. Looking at the XUV400’s specs and features, it offers what it says on paper. It is also spacious and powerful while claiming to offer more range from a full charge. The cabin’s layout is the only negative that stands out at this point that might deprive buyers of opting for it considering it is where any car owner spends maximum time. 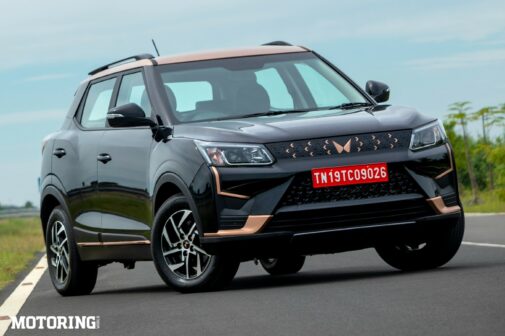 While Mahindra has mentioned that they would be updating and tweaking the XUV400 further before the final launch, it boils down to the price that Mahindra would go with their first eSUV. Going by the lucrative pricing of Mahindra’s recent launches, I wouldn’t be surprised if they pull yet another rabbit out of the hat.