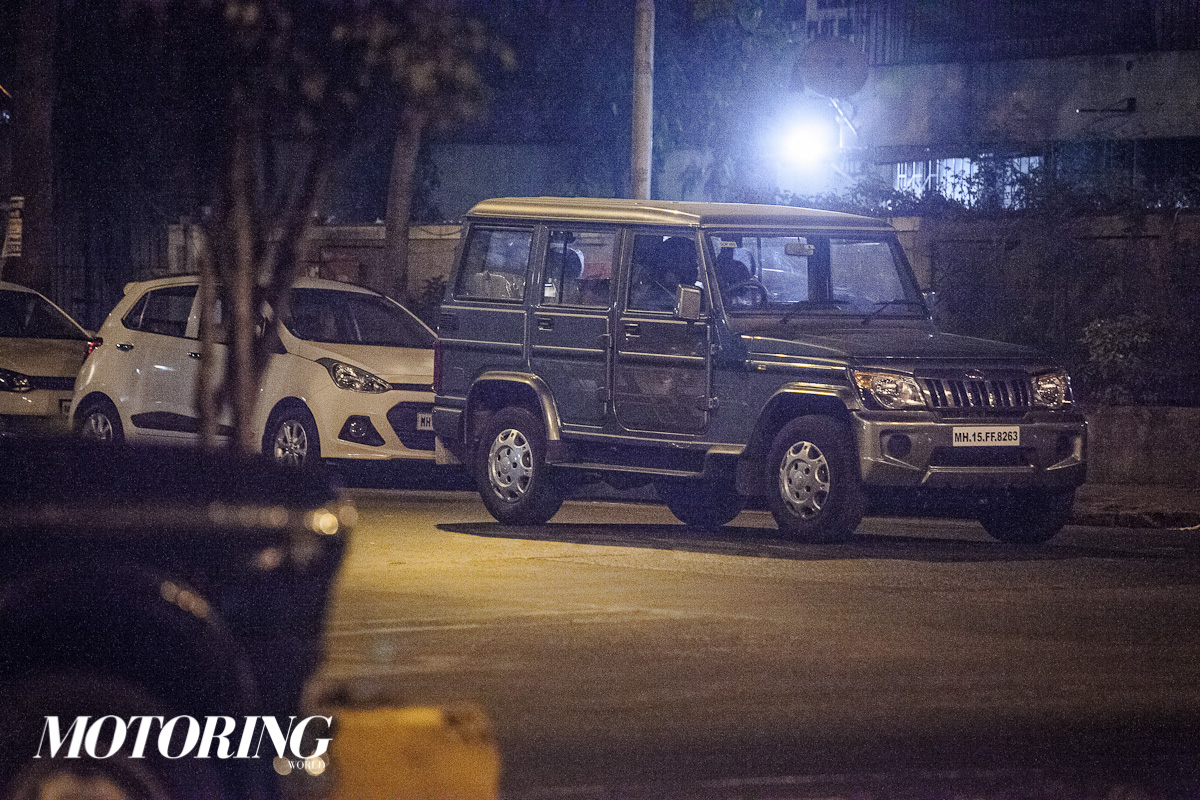 I see a pair of shadows scamper away hastily in the rear-view mirror. There’s nothing amiss with what I can see — but something isn’t right with what they can see. I step on the brakes and the crimson glow through the clear-lens cases lights up my rearward field of vision, giving me a blink-and-miss glimpse of the two visibly uncomfortable characters. They make a run for it before I can even register what has happened. When I do, I realise it’s down to the characteristic slow-crawl of the Mahindra Bolero, a dreaded visual in the minds of the anti-social of Mumbai. I let out a chuckle but am alarmed at the same time.

It’s within the comfort of the labyrinthine geography of the city that crime has found shelter, howsoever temporary. Enforcement has the tools to deal with acts of wrongdoing, but the greater enemy is the idea of crime, something that has no address or identity. Concealed in the dangerously safe confines of flesh and skull, it’s this idea that can only be countered by authoritative imagery — a khaki uniform, perhaps, or a dangling holster. It’s a simple form of conditioning through omnipresence and this applies to motorised forms, too. The Bolero, much like the erstwhile Swaraj Mazda patrol van or the Royal Enfield Bullet, has become a part of this conditioning process. It’s a symbol of authority. Around it, you want to behave yourself. It’s just a wise thing to do.

The one I’m driving through the night is called the Bolero Power+, and I’m curious not only about how it is as an SUV, but also for what it means in and to the real world. Often perceived as the more agricultural of SUVs, the Bolero was an instant hit when it was launched way back in the year 2000. With Mahindra’s rugged credentials to bank on and a fair effort to move it up from the nondescript class of people movers, the Bolero, unsurprisingly, garnered a fan following like little else, the Toyota Qualis aside. Over the last 16 years, the Bolero underwent substantial changes over a cleverly diversified range of models and this, the Power+ is the newest of the lot. Is it change for the sake of change, however? The dark alleys of Mumbai hold the answers.

It’s well past midnight when I fire up its 1.5-litre three-cylinder engine. A 1.5-litre Bolero? Isn’t that a bit… small? In terms of displacement, it is, but it’s lost nothing of its original nature and, instead, only gained. At idle, I can barely hear the engine from within the cabin and the instant blast from the air-con softens it further. The steering wheel, I notice, is not adjustable and is set at a van-like tilt and perhaps a touch too high, something you learn to live with but not something you will necessarily appreciate. I suppose the anatomically gifted (hey, Ed, what’s the politically correct term for ‘pot-bellied’?), who form a major chunk of the Bolero-buying demographic, might have contributed to this layout. That, or maybe it makes pulling out a .45 cal Colt from a holster easier when on the move. Not that I tried, mind you.

We’re amidst heavy police presence now, but peddlers seem to walk about freely, something that can only be credited to an ‘understanding’, in loose terms. The buildings around us are old, derelict and a chaotic mix of cables, hand-painted signboards and light bulbs of random sizes and colours. It’s nearly two in the morning, but the street is busy if a bit uneasy. Or maybe it’s just me, caught in the dead centre of Mumbai’s fabled prostitution hub, Kamathipura. I park right next to a patrol van, but the Bolero goes unnoticed. It blends right in and they probably think I’m one of them. A young lad, barely in his twenties, strides up to me most nonchalantly. ‘You want girl? 350 only!’ I laugh it off, on instinct, and strike up a chat with a police driver. He’s driven the Bolero round the clock over the last decade or so and swears by it. He casts a curious glance on the car I’ve brought to the party, entirely disbelieving of the fact that it is, in any way, newer or smaller. ‘It looks the same! But tough car. Best for our work. No problem, come rain or sunshine. Not as good as the Qualis, but easier to maintain…’ his voice trails off.

Indeed, it is hard to spot the changes to the Power+ on the outside. It is now a sub-four-metre SUV, although it’s really hard to tell from the outside. In the process of this downsizing, it’s lost 112 mm of length but, thankfully, nothing from its 2680-mm wheelbase. And it still has that tailgate-mounted spare wheel, if that matters to you. Honestly, I have no qualms with the Bolero’s design — I rather like it, in fact — save for the front end, which, in the desire to appear contemporary, is completely out of sync with its angular profile. I wish Mahindra had evolved the Bolero to look more purposeful, more irreverent (like the G Wagen, for instance), rather than trying to blend it in. It’s on the inside that the changes are substantial, not so much in terms of space, but in terms of NVH levels. The jump seats are best left for ammunition or very small children, particularly if you don’t like them too much; middle-row is passable and with limited knee-room.

Driving through the narrow alleys of Dongri, a domain of the underworld’s crème de la crime, the silence inside the cabin is eerie. Although most of the area is tucked away in bed, I get the feeling of being watched. Maybe it’s all in my head, but that does little to take the sensation away. I seek solace in the Bolero’s power steering, which makes driving it through even the tightest spots quite a breeze and also in the 70.4 bhp and 19.8 kgm its engine produces, which makes it respectably quick on its feet by utilitarian SUV standards. I lock the doors anyway — just in case — and stick in a USB filled to the brim with some classic blues numbers. It’s an oddly romantic moment, listening to B.B. King and his unrefined croon over the course of a song called, fittingly for this moment, ‘3 o’clock Blues’. We’re at a dead-end now, marked by a police-issue Bolero parked alongside the pavement. Remember that conditioning bit I mentioned?

I navigate us out of the area relying solely on my sense of direction and we’re now out on a wider, brightly-lit road somewhere in the armpit of Mumbai’s southern suburbs. There’s a flurry of tail-lights down the road which, as we move in closer, turns out to be a DUI check-post. We’re waved through, unsurprisingly; a sign of its well-deserved revered status amongst the tireless police force. The Bolero is quiet even at 80 kph on Mumbai’s empty streets, which is unusual, and despite the heady concoction of concrete, paver blocks and broken tarmac, it doesn’t lose composure. It was made for this kind of stuff. Worse, perhaps.

A bicycle-mounted coffee vendor catches our attention just as we enter Dharavi, arguably the largest and most industrious slum establishment in the world. A steaming, if flimsy, cup buys me time to introspect as I step away from the Bolero. Here’s a car that’s, in a way, laughable for the way it’s designed (those external door hinge covers aren’t fooling anyone, are they?). It has the ergonomic properties of a ceiling-mounted wingback and the handling of one, too. And yet, it suits the purpose like nothing else. It’s neither purpose-built nor ostentatious and yet, it finds over a hundred thousand homes in India every single year. There are over seven lakh Boleros on the road as we speak, so it’s not even like it’s exclusive enough to warrant me giving it a lighter sentence. Its success is almost ridiculous. No, it is ridiculous.

However, if you take your driving shoes off for a moment, you’ll see that the Bolero Power+ is a lot like the people — and that includes you and me — of this country. It’s far from perfect, but it’s not alien to evolution either. It’s not the best of its kind in the world, but out here, where the bedazzling city lights co-exist with the shadowy depths of greed and despair, it’s at home. Soul, in the matters of motoring, doesn’t always have to wear a shade of scarlet, does it?