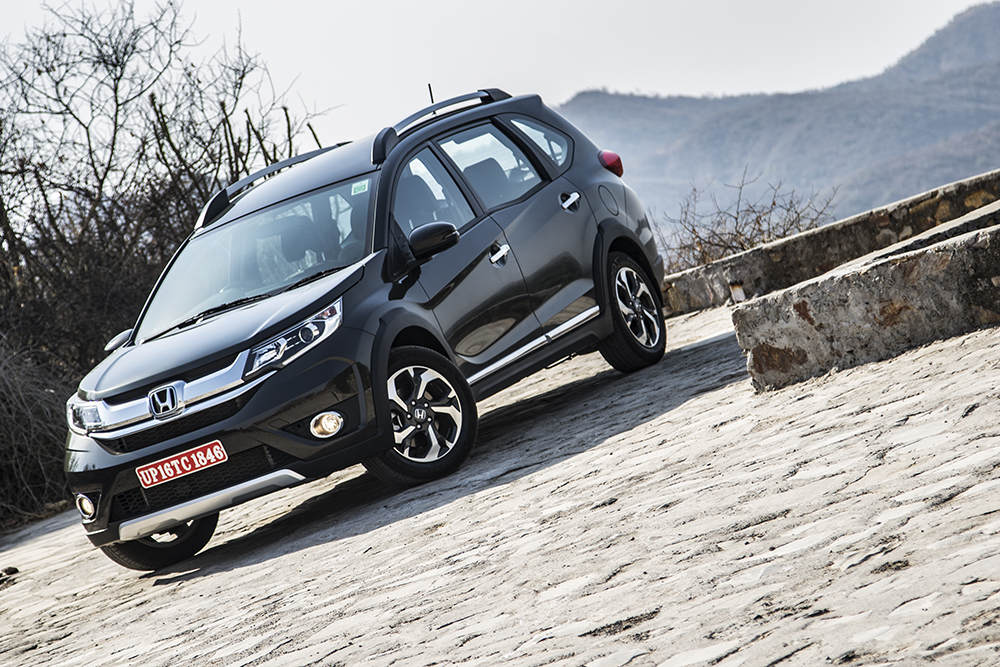 Honda can be viewed as one of the unluckiest manufacturers in India. They made great cars (cars we still want – just ask any enthusiast whether he’d like to drive a Type ll VTEC) and just when there were going to be unstoppable, the price of petro was deregulated. They struggled through the two years that it took for them to develop their diesel engine – top on all the categories they entered but only in the petrol versions, which didn’t account for a whole lot of sales. It endured, though, and the Amaze with its unprecedented 100 bhp diesel turned its fortunes around. We’ve seen that diesel engine across its range now, in the City, the Jazz, the Mobilio, and now it’s present in the BR-V. The BR-V looks like it will do for Honda what the diesel engine, or the City, did for it before. Here’s why.

The first thing an SUV owner in India needs is for it to look the part. Honda has managed this admirably with the front end of the BR-V. The massive chrome bar that makes up the grille is the first thing that grabs your attention, followed by the protruding chin of the bumper. There are projector units for the low beam, while high beam is taken care of by conventional bulb and reflector units. Pilot lamps that are LED light guides on top-spec versions are reminiscent of the Brezza’s daytime running lamps. The current fashion of two trapeziums meeting at the middle is followed by the front bumper, giving it an aggressive look. Squint and you’ll see a lot of old-gen CR-V in the design from some angles.

From the side, the profile is more MPV than SUV but the BR-V does a good job of hiding it. There’s also a bit of Mobilio in the way the window line rises, then falls gently away halfway through the rear window. The matt black plastic cladding adds a little muscle to the design, but it feels more crossover and not quite SUV enough (remember the Fiat Siena Weekend Adventure?) Honda has also chosen some very interesting places to apply chrome – there’s the obligatory chrome door handles, but instead of underscoring the windows, they’ve opted to put a chrome strip between the lightcatcher and the matt black side sills. We’re not fans of the positioning of this particular chrome strip, because it makes an already busy section even more so, but it helps hide the height of the doors. However, we do so love the wheels, with their diamond-finish-shruiken-style detailing.

The rear is the least impressive of the angles to view the BR-V from. It is upright and narrow, and this doesn’t convey the correct SUV signals to us. The tail-lamps are undoubtedly interesting, with a combination of LED and bulb elements. The red line connecting both lamps across the hatch is very American, and is reminiscent of Chrysler and Dodge cars. The recess for the number plate is low down on the hatch but not in the traditional place at the bottom of the bumper, either, so it gets the same awkward placement that we’ve seen on the Hyundai Creta. The rear bumper is one of the strangest shapes we’ve seen in a while – it is much taller than it is long, and houses the matt black bottom and a C-shaped recess in the middle that hides its true proportions. The automatic versions that we sampled were also top-spec variants but are easily distinguished by the lack of faux silver skid plates front and rear, and the pilot lamps being bulbs rather than LED light guides.

While we’re not fans of the BR-V’s busy design, we can’t deny that it will be appealing to a great majority of the public and will be a hit.

The interior of the BR-V is familiar. Too familiar, some might say, because we’ve seen all the parts before. There’s the steering wheel and paddles from the City, the audio and climate control systems from the current Amaze, and the instrument cluster is common across the Honda range. The dashboard plastics have great fit and finish, but we still don’t like that they’re hard, shiny plastic – that’s not to say that the quality hasn’t improved over the City and Mobilio, but for a premium product we were expecting something that would comfortably outdo the Jazz’s plastic quality, and the BR-V doesn’t feel like it is that far ahead.

However, view it from Honda’s point of view, and the competition will be the Renault Duster, which isn’t going to win any awards in this respect, to say the least. The black leather upholstery is the saving grace – it looks and feels premium, although the forty-degree Rajasthani heat didn’t do it any favours on our test drive. There are quite a few cubbyholes in the BR-V, and we really do appreciate the massive door pockets in the second row of doors and the thoughtful mobile phone recesses for the third row occupants. The audio system isn’t a fancy one but it does the essentials – Bluetooth telephony and audio streaming, iPod connectivity, USB and aux capability, and it can be controlled via buttons on the steering wheel.

The driver’s seat adjusts for height, but the steering wheel doesn’t offer reach adjustment. Visibility is great all around, and all controls fall easily to hand. The second row has been optimised to offer the greatest room in the segment, says Honda, and we believe them – there’s a surprising amount of space and comfort in the second row. The real surprise, however, is the third row. It offers slightly more space than an XUV or Fortuner, and even large occupants such as this writer won’t find it uncomfortable for short runs. With the roof-mounted AC blower helping cool the cabin aft of the front seats, the rear cools quite effectively. The boot offers a decent amount of space even with the third row up – fold the 50:50 split-folding rear seats forward, and the boot opens to a very usable 691 litres. The low, wide loading lip helps a lot as well. The rest of the features list offers electrically adjustable and foldable mirrors, two airbags as standard across all variants, and ABS is absent only on the base petrol variant.

While we’re sure Honda has benchmarked the standard in the segment, it hasn’t come out with the best plastic quality of the bunch. We’d have liked it to feel more premium to match the promise that the exterior makes better. What also stands out like a sore thumb is the absence of features like parking sensors, a colour touchscreen system and satellite navigation. Today, cars a segment or two below the BR-V’s are offering automatic headlamps and wipers, an electronic dimming rear view mirror and even cruise control – there’s no reason that Honda cannot offer some of these, at least at options, on the BR-V if it is going to market it as a premium product.

WHAT’S UNDER THE HOOD

Honda India is turning into the master of sharing components, and there is no better example than the BR-V: it has two motors powering it, both four-cylinders displacing 1.5 litres. One is a naturally aspirated petrol and one a turbocharged diesel. You’ll also find both these engines in the Honda City and Mobilio. They also have similar states of tune: 118 bhp/14.8 kgm  for the petrol, and 99 bhp/20.4 kgm for the diesel. What is different with the BR-V is the newly-developed six-speed manual for the petrol engine – it offers the BR-V increased flexibility to take on the extra load (and chassis weight) that it needs to handle compared to the Mobilio. The petrol engine is a peppy performer when unloaded, and picks up smartly from low revs as well. You’ll have to rev it out to extract performance from it, as with any naturally aspirated engine, so we aren’t sure how well suited it will be to a full-load trip. You’ll certainly enjoy the noise it makes as it approaches the redline, we can assure you of that. If you’re buying your BR-V for mostly city usage, the CVT is where it is at. The ‘rubberband’ effect is minimised, and thanks to the wider spread of ratios, it is more efficient than the petrol manual, and in ‘S’ mode, tap either of the paddles and it locks into a ‘ratio’ that makes it feel like a conventional automatic gearbox. It even holds the ‘gears’ up to the redline, although it doesn’t downshift on its own even if you give it full throttle. The manual mode is a lot of fun, there’s no doubt about that. What will sell the most is the diesel, however. Packaged with the six-speed manual gearbox, it offers good hauling capacity. However, the turbo lag can be an issue with a full load, but rev it out as you would a petrol and things get better. Honda says they’ve worked on the NVH of the diesel, and it is definitely one of the two best diesel Hondas in terms of NVH (the other being the Jazz) but whether it is best in class is something we’ll have to find out during a comparison.

The performance of either of the engines coupled with any of the gearboxes isn’t exciting, but it certainly is adequate. The auto ‘box offers a great alternative to the Duster’s AMT, and the diesel has the long legs required for cross-country cruising.

CAN IT GO AROUND A CORNER?

We’re not really surprised that it can, and neither should you. The Mobilio was an MPV that wasn’t bad to drive at all, and the BR-V continues the tradition. We didn’t drive it full up, of course, and neither did we get the sort of corners on the drive that made us wish we had an Integra instead, but the BR-V held its own with well-controlled body roll and predictable loss of grip. It’s remarkably tail-happy when provoked as well, at least, when there’s a single person in the car.

The ride is great when unloaded – firm enough to impart a sense of security and a premium feel, but never crashing through sharp edges. Just like the engines, the chassis is tuned to be comfortable and predictable, which will no doubt be appreciated by the target audience. Our time with the BR-V was all too short, and on a road that didn’t offer much by way of corners, so we’re looking forward to exploring this facet of the BR-V’s personality more.

The BR-V will be the hit that Honda wants it to be, we’re sure, but the strategy of holding back a few features for a facelift or an ‘RS’ variant is something that we don’t appreciate – it can only mean a higher end price for the consumer who wants those features; features that are available on cars a segment below as well.

So far, the Indian consumer has seen more value in features that he can see all the time (LED DRLs, sat nav) rather than practical things that are used once in a while (rear door pockets, large boot). The BR-V will be a big seller, that we don’t doubt. We just hope that Honda prices it in such a way that it offers great value, because that will dictate how big a seller it will be. For what it is worth, the BR-V is deserving of success because it straddles the opposing requirements of looking like an SUV and being an MPV the best of the bunch. Oh, and there’s the small matter of it being the only real three-row car in its price bracket…