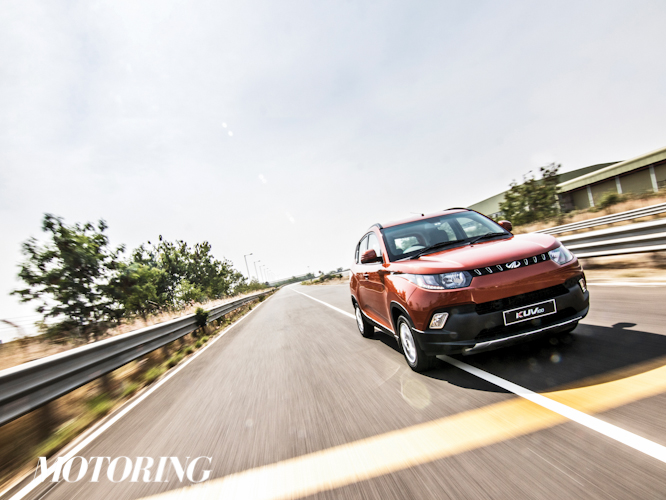 The premium hatchback segment is bursting at the seams with choice. You can have products from manufacturers anywhere on the planet. You can have them with petrol or diesel engines, with 5- or 6-speed manual gearboxes, with CVTs or dual-clutch automatic gearboxes. There’s the spinoffs as well — crossovers. There are crossovers with a serious effort at being able to handle bad roads and the ones with mere plastic cladding and a higher sticker price. That last segment has always been open to the ‘SUV manufacturer’ Mahindra and now it plans to capitalise on it.

WHERE DO WE BEGIN?

There was some homework to be done, though. You can’t realistically meet the expectations of the premium hatchback/crossover buyer with a ladder frame chassis and drive going to the rear wheels (Premier tried rear drive with the Rio and look how much interior space that offered!). Mahindra had only the one monocoque vehicle in the XUV before this, so there was a whole new vehicle to design. That meant freedom to do whatever they liked within reason. Of course, it needed to look like a  Mahindra, too.

The results are startlingly good. There’s a tiny grille sandwiched between a bonnet and bumper that have muscles bursting out of their skin. The bumper is a two-part product and the lower half is matte black with a faux skid plate underneath. Move to the side, and the profile looks a little ordinary because of how upright it is, but you can’t deny that the sweep of the headlamps is done perfectly and the vertical mass above the rear wheel is hidden exceedingly well by the crease that runs into the top of the tail-lamps.

The rear looks a little plain in comparison to the front, but the dual-pod tail-lamps are a nice touch. Mahindra has chosen to mount the number plate low down on the bumper, on the matte black half. The foglamps are also  mounted at the same level as the number plate and unlike most vehicles in India, both sides are foglamps that light up when engaged.

We love the little touches like the integration of the turn signal indicators in the headlamps, the LED running lamps that are a first for the segment, the subtle grille that is still very much a Mahindra grille and the spot-on proportions of the body.  Yes, the headlamps are from an Evoque, the rear door handles are from a Beat/Spark, and the tail-lamps are from a first-gen R8, but the design looks like a cohesive one and it genuinely is good-looking in a modern-car sort of way, which is a great thing for Mahindra.

WHERE DO WE GO NOW?

Inside, it’s familiar ground if you’ve been around the current Scorpio or XUV. There are similar colours and textures, and the design echoes its larger brethren. It’s a refreshing change from the beige and black that you’ll see elsewhere.

There’s a new ‘floating’ design for the dashboard, meaning that it doesn’t have a traditional vertical element to the centre console that we’ve come to expect. Instead, it just hangs around, and everything that is usually mounted a little lower, like the AC controls or audio system controls, is mounted further up. On the floor is a set of large storage spaces that will accommodate anything you could have in your pockets comfortably. Yes, including cargo pants. Of course, that is in the five-seater option. There’s also a six-seater variant on offer but there’s no seat in the boot this time. Instead, Mahindra has taken a leaf out of the Fiat Multipla’s book and offers a middle seat in the front as well, with a lap belt.

We at Motoring World live a, er, healthy lifestyle, which has made us appropriately healthy and found that too many elbows dug into ribs, especially while shifting to second gear. Nevertheless, it is an interesting solution and is worthy of praise because of the risk Mahindra is taking — but a three-point seat belt is a necessity for someone whose face might meet the gear lever should something unfortunate happen. It isn’t all bad, though: the six-seater is a good car to be in if you’re a young couple (if you know what we mean). Lowering that middle seat back to turn into an armrest with dual cupholders isn’t easy by any means and the flat floor means no bottles should be kept in the passenger footwell, but there’s a surprising amount of space at the rear even when a six-footer is driving. Shoulder room is also great — if you’ve got a large family but small pockets, the KUV should definitely be on your list.

There’s a BlueSense app developed for Android by Mahindra that does many, er, kool things like show you the distance to empty and it also converts your phone into a remote for the audio system. The audio system has a monochrome screen but offers a lot of information. The tactile feel of the buttons around the audio system isn’t quite as good as the rest of the interior and our team has a divided opinion about leaving the dashboard-mounted gearshift stalk bare.

Overall, the KUV’s interior is fresh and spacious — and it offers a lot of features, including a couple of ‘secret locations’ that we can’t tell you about. Else they won’t remain a secret. Oh, and there’s ISOFIX anchor points for a child seat in the back, making this the most affordable car to get if you need your child to be safe — it also meets or exceeds all the crash safety requirements that will come into effect in 2017 in India.

The petrol feels peppy and makes a lovely noise when given the stick. It is also a surprise because it is redlined at 5000 rpm, has its power peak at 5500 rpm and the fuel cutoff is at 6000 rpm. The diesel is the one with more technology, Mahindra offering an ‘Eco’ mode that cuts power output and fuel consumption by at least 10 per cent. NVH of the diesel is a little high compared to the others in the segment at idle, but things smoothen out once you get it going. All the other diesels in the segment also make roughly the same amount of maximum torque, but get past the turbo lag and the KUV will surprise you with how hard it pulls in the lower gears. It will also keep up with most traffic on the highway, let alone the city, and this will be the one to get if you need performance or will have a full car most of the time.

We didn’t get to sample the KUV outside of the Mahindra test track at the factory, but what little we drove there impressed us. Ride is firm yet supple and the KUV’s dimensions are such that it will be easy to manoeuvre in traffic. It also offers a lot of grip through the turns, while the steering is accurate, weighs up well and is predictable on the limit. Mahindra has taken inputs from Cayman Dynamics, a US-based company that is made up of ex-Ford engineers and does chassis and suspension tuning for vehicles around the world. We have the same company to thank for the XUV’s newfound handling ability. We’re itching to get our hands on a KUV to see how the ride and handling is in the real world, but rest assured that with a specialist company being involved in its dynamics since the first day, it is going to be surprisingly good.

We’re going to ignore the fact that spelling ‘cool’ with a k makes it kooler, because that’s silly. What isn’t silly is the capability of this product. The KUV 1OO promises a lot and not just fun — the introductory price undercuts hatchbacks like the Maruti Swift and Ford Figo, let alone the Toyota Etios Cross and Fiat Avventura. It is in a class of one and Mahindra will have a tough time keeping up with demand for it.