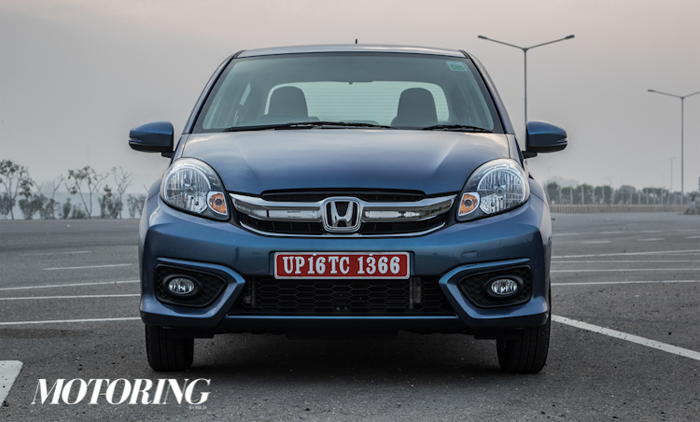 The Amaze has been a good seller for Honda, but in the face of increasing competition it needed a revamp. There aren’t many mechanical changes, except for a new automatic gearbox. But more on that in a bit.

WHAT’S AMAZING ON THE OUTSIDE?

There’s a honeycomb grille that is all but obliterated by a massive horizontal chrome strip as made famous on the City. The large chrome bar gels with the narrow-eyed JDM look of the City, but with the Amaze’s wide-eyed innocent look, it’s a bit out of place. However, knowing how much the Indian market loves chrome, it should be a hit. At the bottom, the bumper has a more aggressive trapezoid opening below the number plate. There are also subtle vertical creases that bracket the fog lamp areas. The fog lamp housing itself has changed thanks to the new central opening of the bumper.

The big change at the rear  is the tail lamp design. There are faux light guides for the running lamps – they look like the Tata Zest’s tail lamps turned upside down, actually. We didn’t like those tail lamps, and we don’t like these, either, because they don’t look cohesive. Everything else remains the same on the outside.

IS THERE ANYTHING AMAZING ON THE INSIDE?

Let’s get the ‘new fabric design’ out of the way first. Yes, there’s a new pattern, but nine out of ten people aren’t going to notice it. What you will notice is the new instrument cluster – it’s now the same as the City/Jazz. Just like the massive chrome grille ornament, we’re not sure whether to recommend it because it’s a colourful thing or cringe because the colours are all too loud. But hey, if you like that grille, you’re going to like this cluster. What is indisputable about it is that it offers a lot of information to the driver, including a distance-to-empty estimate, real-time consumption, and ambient temperature.

The other big addition to the interior is the climate control system, something that has been missing in the Amaze. It doesn’t get the capacitive touchscreen of the City, but a new unit that we expect to see on the upcoming BR-V. We also expect to see the new audio system and head unit on the BR-V, and what it brings to the Amaze is Bluetooth telephony and audio streaming. Both the audio and climate control system use a white-on-black combination that looks sober yet upmarket. There are a few angular silver accents on the dashboard to help the interior match the newfound aggressiveness of the front bumper, but everything else is business as before.

ANYTHING AMAZING IN THE DRIVELINE?

Nothing has changed with the manuals, they’re still the same petrol and diesel, but what has changed is the automatic. Honda has ditched the five-speed torque converter for a CVT that is shared with the Jazz. That makes it easier for Honda, thanks to economies of scale. The dreaded ‘rubberband effect’ of the CVT gearbox is surprisingly reduced, with the Amaze taking off smartly from rest – sometimes TOO smartly for comfort. Normal operation keeps the revs around the 2000 rpm mark, and putting it in ‘S’ raises that to 3000-4000 rpm. ‘L’ mode is for assisting with steep descents, where the gearbox will keep the revs as high as possible to help keep speed in check via engine braking. Unlike previous CVTs we’ve experienced, this ‘box doesn’t shoot off to peak power and sit there when you want maximum acceleration; instead, it hovers around the 4000 rpm, which is very close to the 4500 rpm torque peak.

IS IT WORTH IT?

There’s a lot of peace of mind associated with the badge, and with good reason. We also like the fact that you can have dual airbags across the range, with the base ‘E’ spec getting them on the options list. The upgrades have helped it keep up with the Joneses, but look at the price differential between the top-spec petrol manual and CVT, and you’ll see there’s Rs 1 lakh worth of air between them. And that’s ex-showroom, Delhi. That also makes it Rs 30,000, ex-Delhi, more expensive than the Aspire auto, our weapon of choice in the segment. If you must have an Amaze, make it a diesel, then.