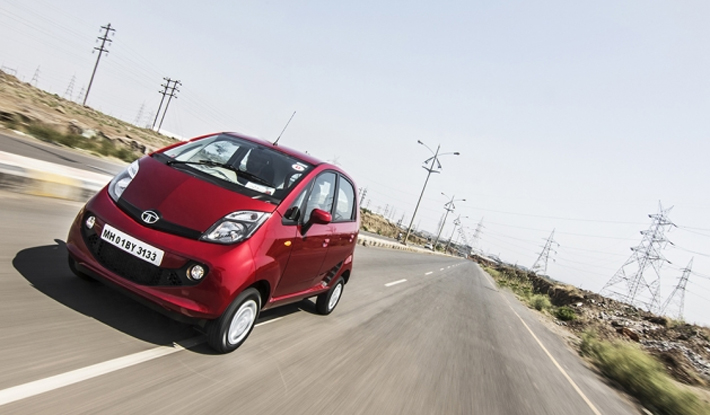 The Nano has had underwhelming sales figures, but that hasn’t stopped the good folks at Tata Motors from going ahead with the car’s development. A true city car puts convenience above all else, and with an automatic gearbox, the Nano should rise above the competition to give the Indian consumer the ultimate city car.

Tata might call this an updated Nano, but it is all but a completely new chassis. It remains recognisably a Nano but it has additions that help differentiate it from the outgoing Nano. Chief among these are the new bumpers – they incorporate the ‘humanity line’ that was first seen on the Bolt and Zest. They turn the Nano’s face from a cute one to one with a wide grin, and two fog lamps reside at the ends of the ‘grin’. The grille itself has what Tata calls the ‘infinity motif’, which is an interesting divergence from the now-common honeycomb grille. The headlamp units are now ‘smoked’, which give it an aftermarket feel and bring it in line with the smoked effect that the Bolt’s headlamps sport. From the side, the Nano looks the same, and the only way to distinguish it is the two new paint shades, Sangria Red and Persian Rose. The latter is made to order and hopes to garner support from female customers. At the back, the bumper echoes the front bumper. The lack of a radiator at the back has made the rear a much more proportional one, and the exhaust tip is now a much better-looking one.

The interior of the Nano retains the same layout as before, but it has changed substantially. Foremost is the new steering wheel – it is the same design as that on the Zest and Bolt, and goes a long way in making the Nano feel premium. The instrument cluster is now part-digital with modern lit-up digits rather than a backlight. This is a very impressive display because of the information available – with the AMT, you’re informed of the gear you’re in, the shift mode, a trip computer and, most importantly, a distance-to-empty readout. Not that it is needed, the fuel tank has been enlarged to 24 litres from 15 litres. You’ll need to be careful when opening the Nano’s hood, the front-mounted radiator makes it very hot to the touch. The space inside remains the same as before, but the new steering wheel eats into the space needed for a six-foot tall driver to operate the brake comfortably. The seats are comfortable, as always, and the new fabric choices with the ‘infinity motif’ design livens them up considerably. The integrated headrest design is also well thought out. The colour of the accents on the seats depends on the exterior colour – the red car we had sported orange accents. The hatch does not have an internal release, so you need to use the key to open it. It has quite a snazzy parcel tray and you get 94 litres of storage space (that’s two large bags, or a suitcase and a small bag) in the AMT. You get 16 more litres with the manual transmission and now that the hatch opens, the rear seats also fold, offering 500 litres of boot space.

Tata is also proud of the new NVH – and they very well should be. Everything from the starter motor’s noise to the doors closing and the noise the indicator makes when it is turned on sounds like it decided to act like it was a class of car above the Nano. Except the doors, they still either swing all the way out or knock you in the butt (or head) while you’re trying to get in (or out). Oh, and the mirrors – you still have to poke them around and try to get as few of your greasy fingerprints over the glass before you set off. If you’re the kind of person who uses mirrors while reversing, you’ll find adjusting the left mirror a bother because it is a fair reach even if you’re a large person. A prismatic dimming inside mirror would also go a long way in making night driving comfortable.

The gearshift lever for the AMT is also a very good-looking unit, though the ‘Sport’ mode button could have done with a little more quality.

The engine remains a 624 cc parallel-twin with 37.7 bhp and 5.2 kgm, but it now feels quite different to the original Nano engine. The ECU has been remapped to offer more mid-range, which means revving it out doesn’t yield as much fun as before. This bodes well for situations with heavy traffic, though. The AMT is the big news, and it is a serious upgrade for the car. It is a Magneti Marelli unit, it has five speeds, and it offers three different modes of operation: Drive, Sport and Manual. Drive puts fuel efficiency at the top of its list, making upshifts as soon as is mechanically possible, and downshifting quite reluctantly. Sport mode holds on to gears longer, while manual mode will upshift only at the redline. Fifth gear has been calibrated to engage at 63 kph or higher, but we didn’t experience it much on our city-based drive. A good feature that Tata has engineered into the gearbox is the ‘creep’ feature – take your foot off the brake when the car is in drive, and it will start rolling forward. This will help reduce driver fatigue a fair amount during rush hour. The automatic does its job well, and even manages to shift relatively quickly for an AMT – but the Nano doesn’t feel sprightly any more. It is a middle-aged person keeping up with the competition, compared to the hyperactive teen it used to be. We didn’t get to sample the manual, but the specs say that it remains the old four-speed manual.

The kerb weight has now gone up to 765 kg, which has made it a much better-riding vehicle. It dispatches rough roads with ease. The power-assisted steering doesn’t offer as much feel as the unassisted unit, but the tradeoff at parking speeds more than makes up for it. The Nano handles as well as before – which is quite an achievement. The openable rear hatch reduces the chassis stiffness, so the Nano needed more reinforcement. In addition, the company has elongated the crumple zone at the front and inserted side-impact beams in the doors, making the Nano safer than before. The Nano still turns in well, holds its line and has fun while doing it, but it does so in a more mature way. The brakes seem to be the only chassis component that have managed to remain in their original form since the first Nano – and with good reason. They have enough juice for city applications. Out on the highway, though, repeated hard stops will have them fading fairly quickly.

Growing up can be a wonderful process or a painful event. The Nano seems to have outgrown its gawky teenager phase, and the maturity in design and engineering is beginning to show. The AMT will make it the cheapest automatic car available in the country when it goes on sale –and that brings us to the price. The Alto AMT costs nearly Rs 4 lakh ex-showroom Delhi, and the current Nano tops out at Rs 2.4 lakh, ex-showroom. Rs 3 lakh will be the magic number for the AMT variant, but we suspect that with another Rs 1 lakh gap to the Alto AMT, Tata might be tempted to give the new, grown-up Nano a new, grown-up price as well.