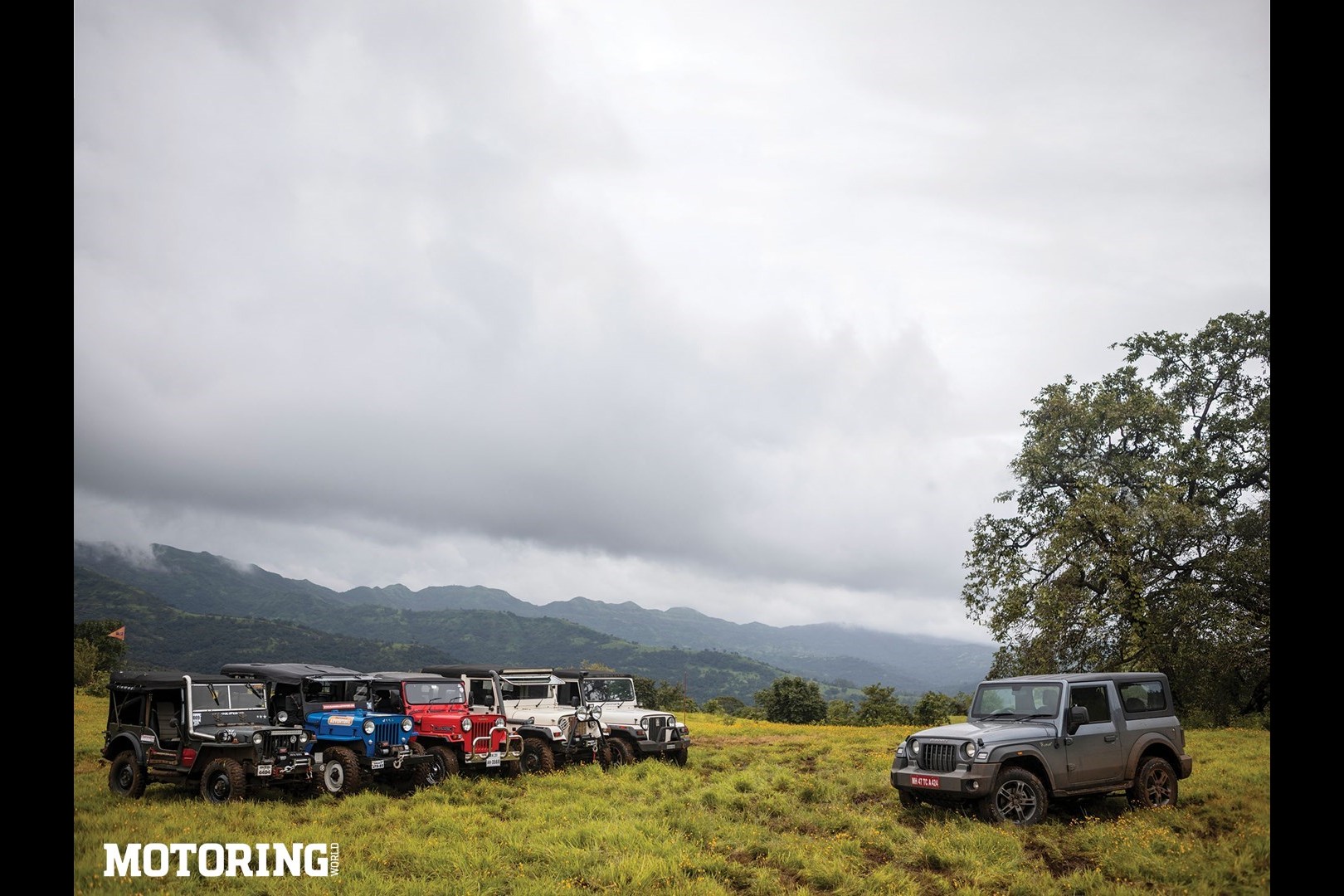 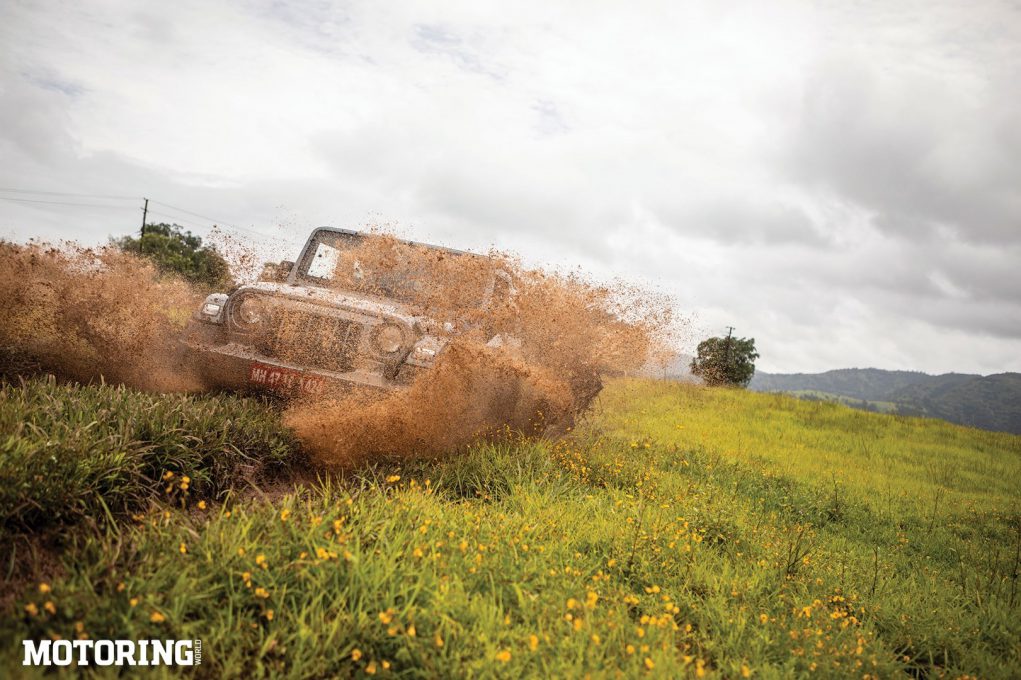 When a child is born, it’s usually welcomed into the family with a small ceremony. The elders gather around and introduce the newest member to the history of the clan and help establish the child’s identity, too. So naturally, when Mahindra introduced the new Thar, a similar ceremony was in order to welcome it into the fold. Unfortunately for the Thar, its elders aren’t exactly the nurturing sort and this quickly turned into a baptism by fire. Each of the older cars decided to pass on only one lesson to the youngster, and they were not ready to leave until the new Thar had learned it. 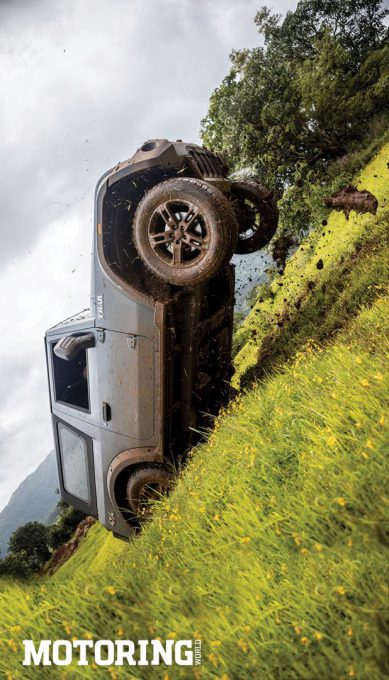 We designed a course that incorporated all of these lessons to see how everyone fared afterwards. From the slippery start-finish straight, the contenders would sprint to the first obstacle called Shallow Grave, obviously the deepest part of our track. The mud ruts here were more than happy to try and beach the cars. A quick left turn into Rock and Roll corner which tested the cars articulation and ability to put power down over uneven terrain before veering right to Rise and Shine. This started as a way to test approach and departure angles, but quickly turned into a contest for the biggest airtime. After making it back to solid ground again, the cars had a quick drive through The Bog to test low-range capabilities before turning right at the righteous corner for the final sprint back to the start-finish line.

Don’t let its final time fool you, the new Thar performs quite admirably off-road. It’s just that running a course after multiple others have gone before you means you’re left with a slushy mess full of deep ruts. Nevertheless, the new Thar handled Shallow Grave well despite it seeming like there was a lot of stuff hanging underneath the car. Rock and Roll was also an easy one, because in its pursuit of good on-road performance, the new Thar’s independent front suspension puts the power down really well.

Rise and Shine presented a challenge because it seemed like the new plastic bumper covers and other add-ons up front may have compromised its approach angles a little. Turns out, that wasn’t the case at all and the new Thar took this obstacle in its stride as well. It was only at the bog that it slowed down a bit. The switch to low range and back out of it to clear this obstacle may have been what took the lead away from it on the timing sheets. After that, it was smooth sailing back to the finish line to celebrate with the others, of course.

This ground-up reinvention of the Thar takes a lot of inspiration from its predecessors but retains a lot of the old magic as well, even if it has round headlights and four wheels, and that’s where the similarities end. It makes use of coil springs instead of leaf springs, which means the Thar’s on-road manners are unprecedented. The drive to the trails was downright comfortable, and everybody’s spines made it there intact. In a bid to avoid litigation from Jeep, the Thar also eschews its iconic seven-slat grille in favour of the black plastic job you see here. The new car also finishes what the Legend and the Thar started, taking a utilitarian vehicle and turning it into a lifestyle SUV.

The Thar is available in two versions, the AX is the adventure variant and is aimed at the hardcore off-roaders. It skimps on some of the creature comforts in favor of off-road ability. It comes standard with a soft top and side-facing rear seats, steel wheels and a mechanical locking differential. What we had is the LX or lifestyle variant; it’s available with either a convertible soft top or the hard top, and has a lot more features on offer like an 8-way-adjustable driver’s seat, electronic stability program, 18-inch alloy wheels, LED DRLs, a 17-cm touchscreen infotainment system and front-facing rear seats. Access to those seats is a little cumbersome, but once there, head-, knee- and leg-room is excellent. Luggage room behind the seats was nearly non-existent, though. Perhaps Mahindra concentrated too much on leg-room for the rear passengers.
Don’t be fooled by that extensive list of features, though; the Thar has most certainly retained its off-road chops. The aforementioned 18-inch wheels lend it great capability; approach angle is 41.8 degrees, departure angle is 36.8 degrees, and breakover angle is 27 degrees. Add that to its 650-mm water-wading capacity and 226-mm static ground clearance, and you can steamroll over pretty much every obstacle that comes your way.

The 2.2-litre diesel engine in the Thar produces 130 bhp and 32.63 kgm spread across a wide rev range. Paired to the 6-speed manual transmission, the Thar is even a nice highway cruiser now. With the aerodynamic properties of a brick, though, you’re not going to want to drive very fast anyway, but whatever speed you settle for, you can be sure that the engine chugs along barely above idle.
Even now, in its more road- focussed form, the new Thar is more at home in the middle of nowhere than it is dealing with city traffic. Yes, its interior is orders of magnitude more refined than the next best one here, but just like with the other cars, you don’t have to worry about dirtying it. After you’re done mucking about, you can simply hose it down. For the first time, the Thar will only be available with independent front suspension on offer and honestly, it’s not noticeably different off road. Maybe we need to find a more challenging trail, though, because over this short course, none of the 4X4s really broke a sweat. I’d like to say that the new Thar has learned a lot today, but in reality, it was all in its DNA anyway.
Time: 40.54 seconds 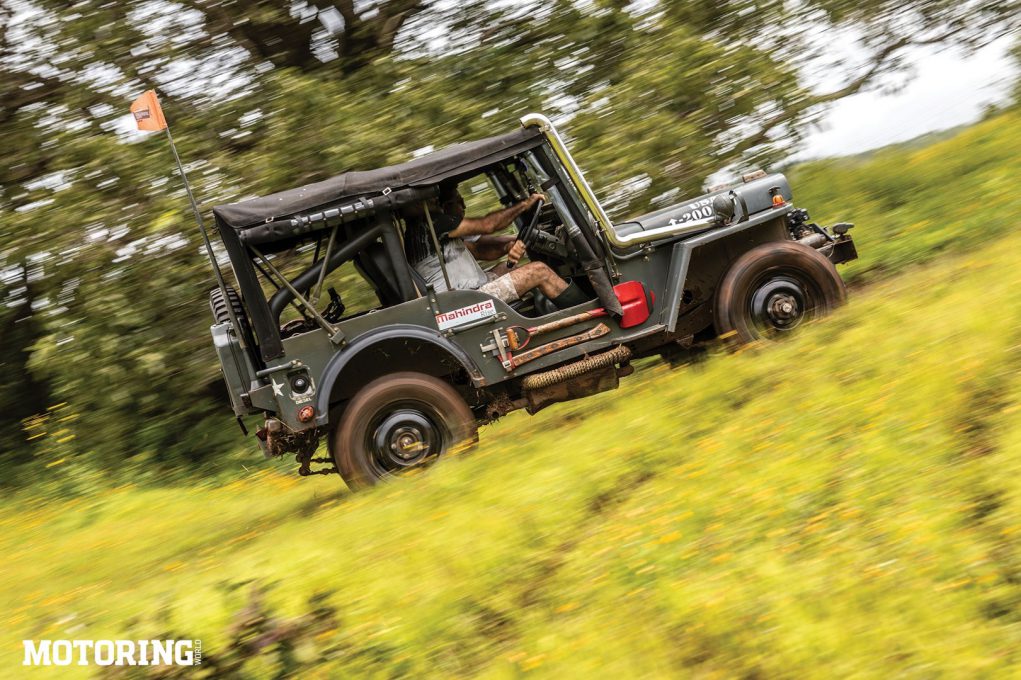 Willys | Let There Be Light
The oldest vehicle of the lot, but not delicate by any measure, and certainly not one to be taken lightly. While others were taking a slightly circuitous route to the start, the Willys climbed straight up a near-vertical incline to get there before the others. The main reason for its confidence — anything that could have broken on it already has and has been replaced with more durable parts. The Willys’s lesson for the new Thar? Weight reduction. Narrow tyres, low weight and a tractable engine saw the Willys conquering obstacles as if they weren’t even there. At The Bog, it didn’t even need to stop to switch into low range and just soldiered on. Speed isn’t its friend, however, and on the faster stretches of the track it was mugged by more powerful machinery. But not only did it teach its lesson in style, it proved to the others that experience certainly counts for something. Granted, the passengers in the Willys would have had their fillings shaken out on their way to the trail, but once there, it was as comfortable as anything.
Time: 39.07 seconds 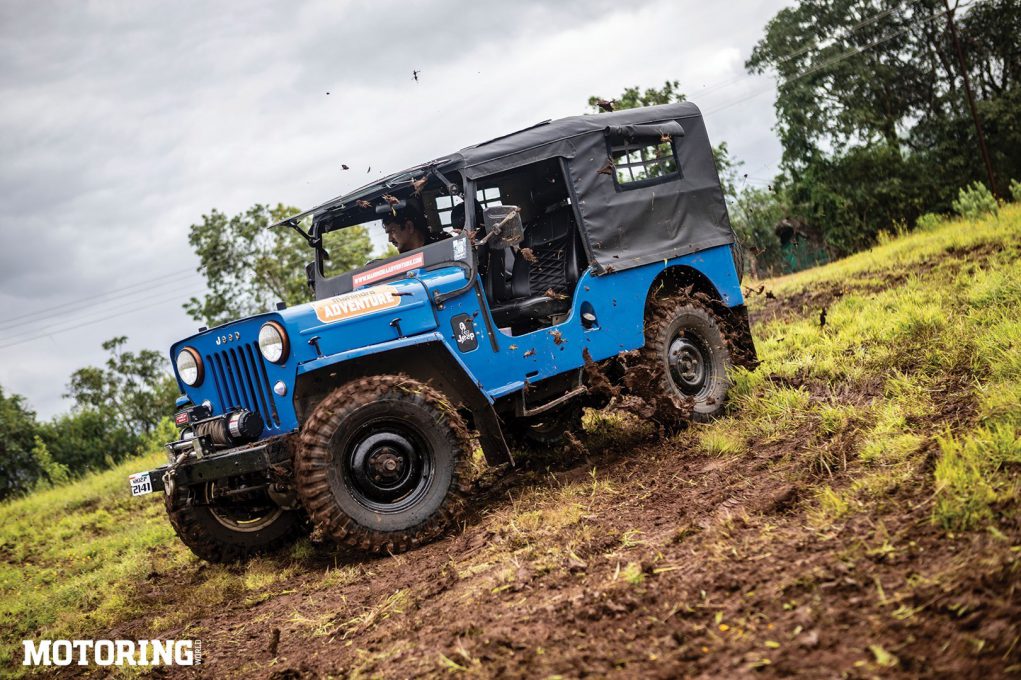 Mahindra CJ | Got The Blues
The Willys might be the grandfather of the cars gathered here, but it’s the CJ that everyone fears. It’s got the right mix of amenities and off-road prowess, and is here to teach the new Thar about the wonders of a clean underbody and ample ground clearance. At Shallow Grave, the ruts were deep enough to scrape the underbodies of all the cars save for this one. It would’ve reflected in its timings, too, if it didn’t get lost half way through its timed run and make an extra loop of Rise and Shine. Although this is its day off, CJs like this have spent entire lifetimes in rougher terrain without so much as a complaint, so it’s no surprise that the course didn’t really challenge it. Initially, it looked disapprovingly at the new Thar’s underbody and all its low-hanging bits. It was only after the new Thar’s timed run that the CJ was satisfied that its legacy was in safe hands.
Time: 40.8 seconds 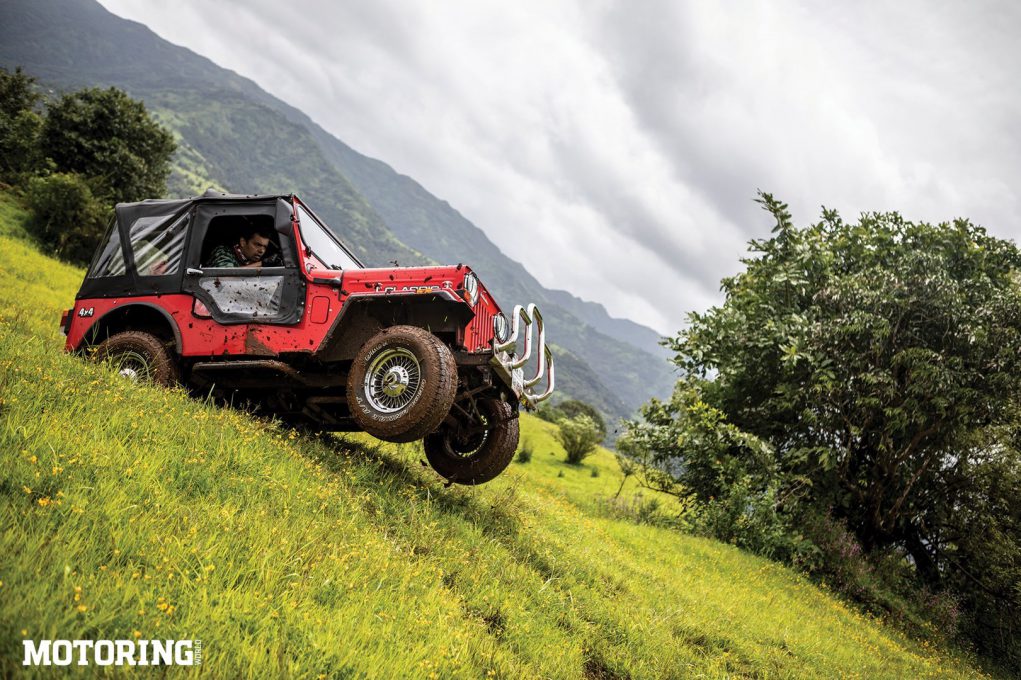 Mahindra Classic | Big Red
Unlike every other car here, the Classic was a road-bound car. Its spoked wheels and wide tyres were meant to take on broken asphalt more than the slush in our course. But it still had a lesson or two to teach the new Thar about on-road manners. For a car that had never been driven off-road before, the Classic took all the obstacles head-on, especially Rise and Shine. It could put its power down through Rock and Roll, too, and simply power through some of the stickier stuff. Once it got past Shallow Grave, there was really no stopping the Classic. In a surprise twist, it also ended up beating some of the more extreme machinery, all while looking good. Those spoked wheels will bear the memories of this trial for a long time to come, but they’re battle scars it earned for itself.
Time: 39.48 seconds 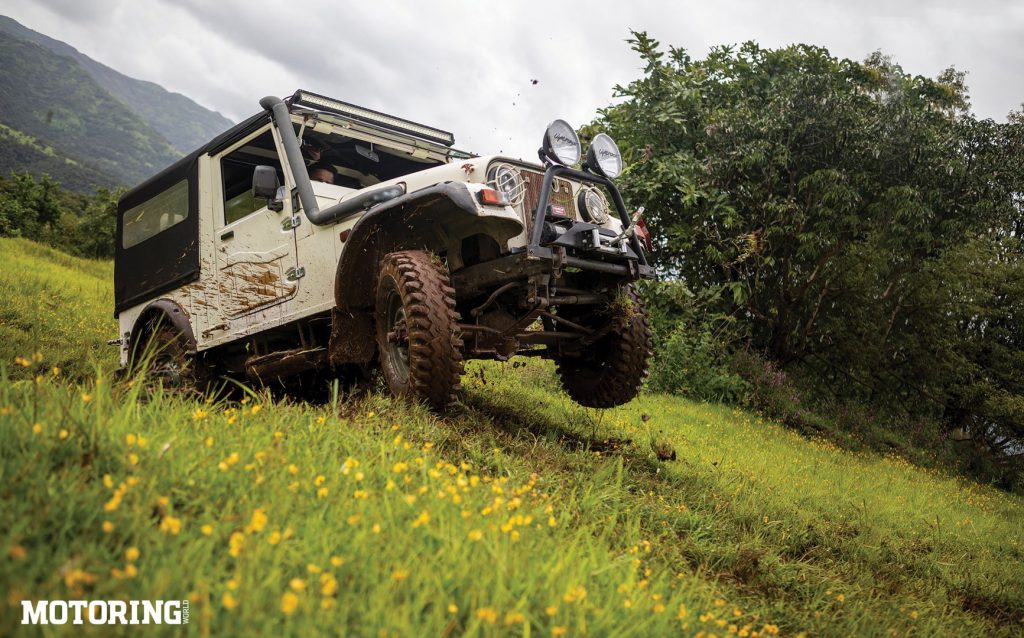 Mahindra MM 540 | Quite Articulate
Moving to the more modern cars, the MM 540 forgot that it was teaching only the new Thar and schooled everyone else on how to take the course. Apart from a slight lift at Shallow Grave, the MM 540 didn’t stop for any obstacle. The speed it carried through Rock and Roll was unreal, thanks to excellent wheel articulation; it maintained its forward momentum even with its axles twisted to extreme angles. The independent front suspension on the new Thar has a thing or two to learn from this articulation. As you can see from its livery, these are skills it has learned from Mahindra’s own off-road academy and it’s put them to good use. With a time that was three seconds faster than its nearest rival, the MM 540 topped the charts without any drama whatsoever.
Time: 34.75 seconds 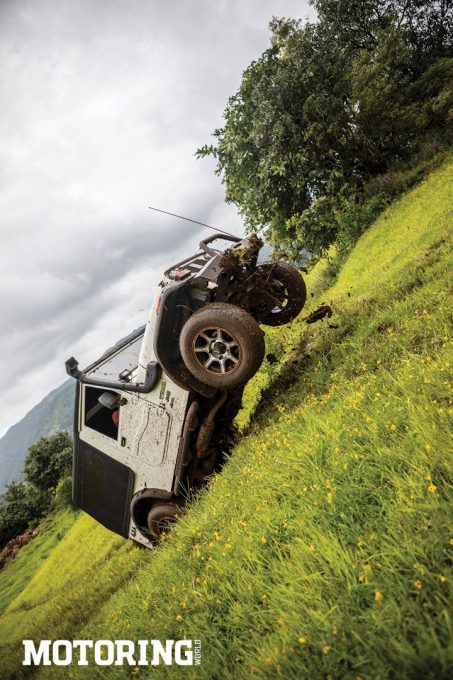 First-gen Mahindra Thar | Neither Here Nor Thar
When the first-generation Thar offered its advice, I wondered if the new one was different enough for that advice to matter. As you can see from their times, the new one does know what it’s doing. After a shaky start, it lost a little bit of time at Shallow Grave getting through all the ruts the others formed. Rock and Roll was a little uneasy for the original Thar as well, but once past that, it was smooth sailing. Rise and Shine had become a slushy mess by this point, but that didn’t slow the Thar down any and it kept its momentum up through The Bog as well. On the sprint back to the finish line, the Thar managed to catch up and beat most of the others thanks to its powerful CRDe engine and ideal gearing. The Thar has proven its off-road prowess multiple times over since it was launched, but it didn’t mind showing off one more time for the new kid on the block.
Time: 37.71 seconds