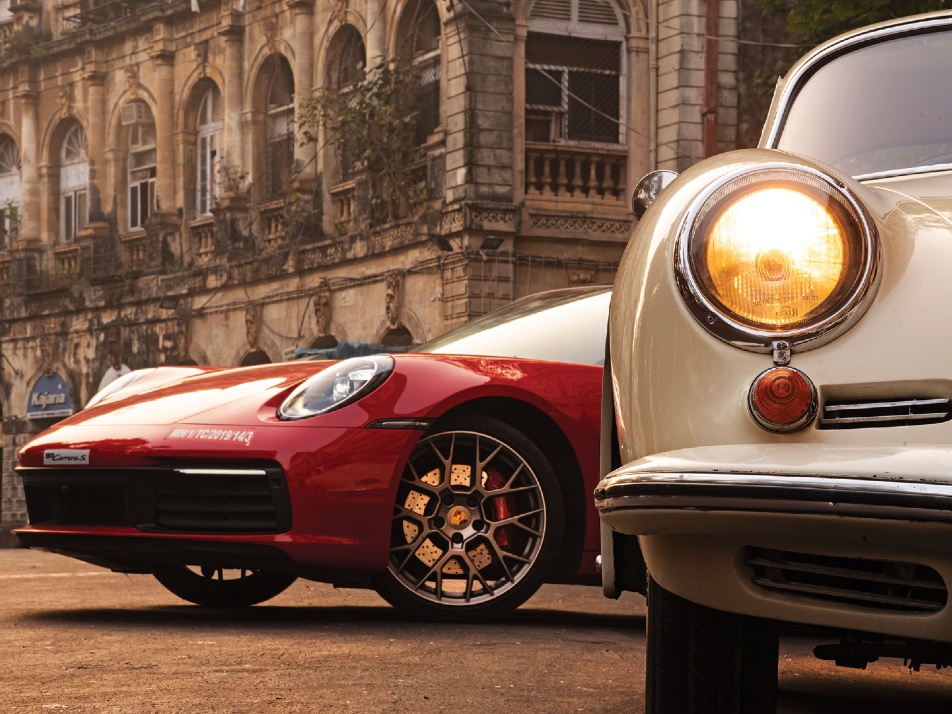 I’m not much of an early riser. I simply don’t see the point in it. I’m also 55 years old, so I daresay I’ve earned the right to sleep in. Crack-of-dawn mornings are for youngsters, and I put in enough of those back in my day to know that unless they’re really necessary, I’d rather catch an extra 40 winks or ten. Still, one must make allowances when the family’s honour is at stake, and if Raj (Kumar Jain, my owner) says I need to go out and take a short spin with yet another of my progeny, for the benefit of Motoring, then arise I must. Rishi, the man who looks after me on a daily basis, shows up at the stroke of 6am and wakes me up. I’ve had a bit of a late one, so I’m slightly groggy (don’t ask where I was last night — let’s just say I’m not afraid to let loose a little in my golden years). I still fire up at the first turn of the key, mind you. I’m looking pretty sharp, if I do say so myself; it’s the valet service I got last evening. Rishi’s phone rings — it’s the fellows from Motoring. Time to roll. 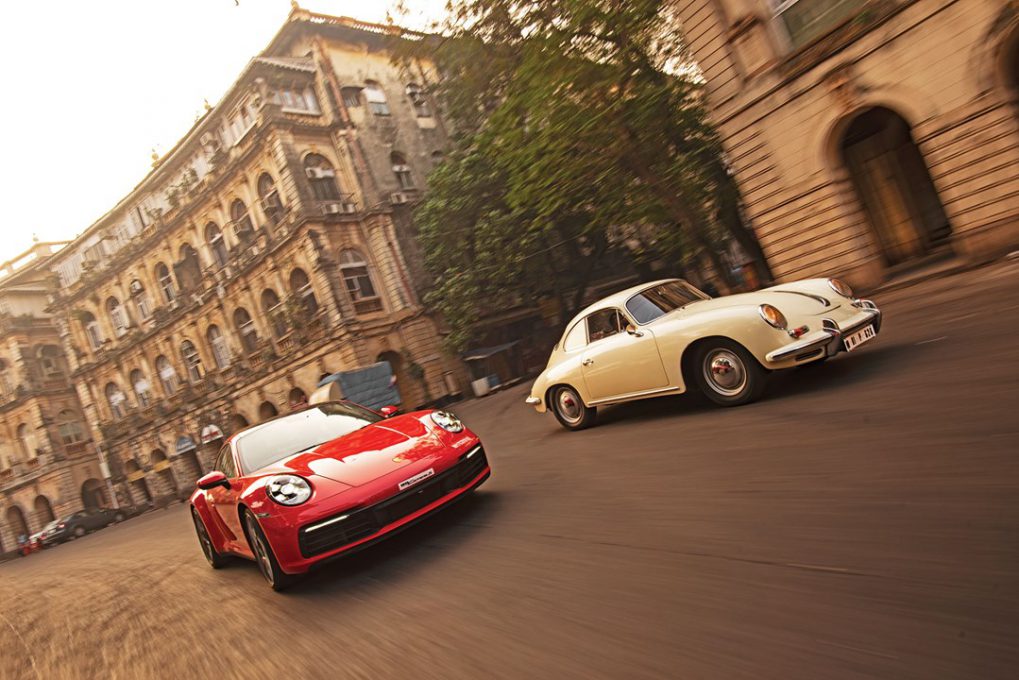 We head out of the garage and hang a left. I see a bright red 911 parked next to a bus stop; this particular child of mine clearly doesn’t do subtle. I haven’t met that many of them, to be honest, so I’m not sure what the lot have gotten up to, but from what I hear, I did a damn fine job of spawning them — they appear to be all the rage in the sporting automobile world. We pull up alongside him; apparently he’s called ‘992’. At least it’s still three numbers and not some incomprehensible series of alphabets. He seems nervous. I don’t blame him. I would be too, if I’d had to meet my old man for the first time — and like I said, I’m looking nifty. I size him up, and I have to grudgingly admit that he’s a pretty fine specimen himself. A lot bigger and wider than I am (no sniggering in the back, now), but I suppose years spent in the gym at Porsche HQ will do that to you. There’s no mistaking him for anything other than my bloodline, though — we share the same shape, the same spirit.

He nods a hello — polite, almost deferential. I nod back. The fellow at the wheel seems familiar. Ah yes, it’s the chap who’d come and taken photos of me many years ago, along with a funny-looking man with a moustache who’d written a story about me for Motoring. He doesn’t look too different, other than some grey in his beard; thankfully he seems to have gotten rid of the ridiculous tuft of hair he’d had below his lower lip at the time. He seems to have moved up in life, too — he’s the one giving instructions to his crew now. He says we should begin driving. Lead on, say I.

We drive up Mumbai’s posh Napean Sea road, past the lovely old buildings that I so enjoy living amongst. It’s early, but the two of us are still causing quite the stir — literally everyone stops dead in their tracks to stare, point at and admire us.

Even that pesky dog that delights in chasing me (and I delight in being chased, naturally) seems unsure about what exactly to do. The young ‘un keeps getting called ‘Ferrari’, for some reason — I’m not sure why. I know that an Italian bloke called Enzo was making some allegedly fast cars around my time, but surely there’s no mistaking us Porsches for anything else? I let it go.

Time to stop for some pictures, apparently. Just as well; I’ve been looking to have a chat with the boy. The photographer — tall chap, seems to know exactly what he wants — has us line up one behind the other. I initiate.

I realise I’m not much of a conversationalist. Must make more of an effort.

‘Tell me about what they’ve done to you. Your insides are different from mine, I’m going to guess.’

‘Well, yes. I have a 3.0-litre flat-six engine, turbocharged. Lots of power — 443 bhp. They’ve given me an 8-speed automatic gearbox, too, although they’re also going to offer a 7-speed manual.’

‘I’ll be… 3.0 litres? 443 horses? That’s a hell of a step up from me, I’ll tell you. Never needed anything more than my naturally-aspirated 1.6-litre boxer four — 95 horses (I’m the SC version) and a crisp little 4-speed manual will sort you out just fine.’

I think the cheeky fellow is taking the mickey.

I decide to have a quick look at his cabin during a break between shots. It looks very different from mine. It’s bigger, of course — like everything else about him — but it’s also a little… cold. There’s black everywhere, all manner of very shiny surfaces and a screen, for some reason. The gear shifter looks like the grip of a fancy walking cane; apparently you move it up and down in order to go forwards, backwards or to stick 992 in neutral. ‘I know what you’re thinking,’ he says, ‘but I can shift gears faster than you can even think about it. I’m not boasting — it’s just the way it is. And don’t judge me by this cabin — I can be kitted out in hundreds of different ways, depending on what my owner wants.’ Looks like someone is feeling a little defensive. He decides to give my cabin a once over as well. After a pause, he says ‘We’re not that different, you know. Look at how we’re both designed to fit neatly around our drivers — our pedals, our steering wheels, our seats and instruments.’ I have to admit that he’s right.

I’m beginning to get a bit impatient now. Enough pictures — when are we going to drive? The answer arrives soon — it’s now, thank goodness. The chap at the wheel of 992 (apparently his name is Pablo) says that we’re going to go to Marine Drive and then to other parts of South Mumbai. Fine by me; I enjoy bombing around those parts. Goes with my style, to be honest. I’m also going to show the youngster what I’m capable of once we get on to Marine Drive. He may have looked askance at my engine, but it’s all about power-to-weight, and I weigh less than 900 kg. As soon as that traffic light turns green, I’m going to… oh.

He’s gone. Rather far away, too. Oh bugger it, he’s just a speck now. I know when I’m beaten, so I’ll do my best to catch up. The little whippersnapper sounded glorious when he raced off, but damned if I’m going to admit that to him. Rishi gives me some stick, and we eventually draw up next to him. ‘Pretty good for an old-timer,’ he says in a genuine way, which takes me a little by surprise. ‘Thank you, laddie. That 3.0-litre isn’t half bad, either.’ We smile at each other. 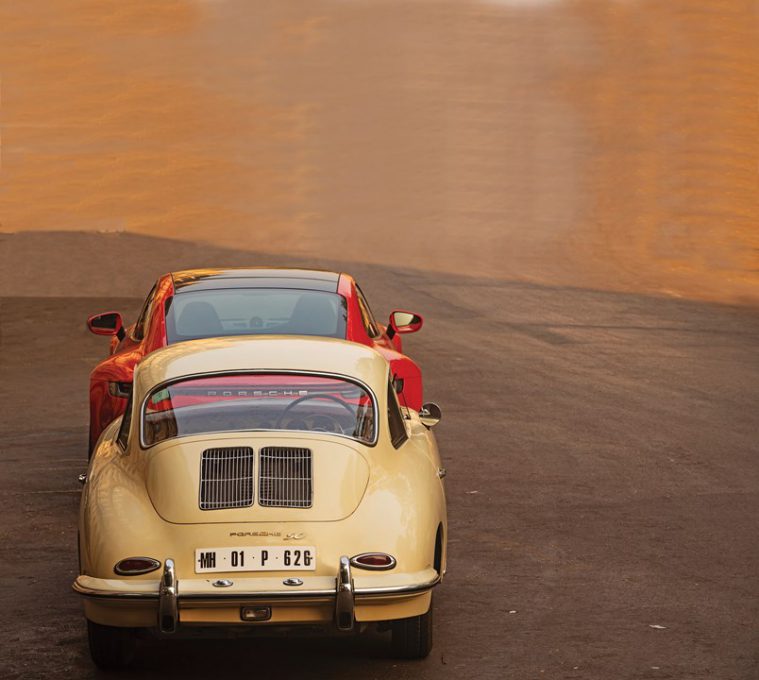 We’re now near the Asiatic Library. Glorious old building, with some equally impressive structures near it, which is where we line up again for more pictures. The more time I spend with 992, the more I’m convinced that my legacy is in safe hands. Word has come back to me over the years about some of my older children, and how they’ve all been world beaters, but this is the first time that I’ve spent quality time with one of them, and I’m happier for it. I should probably do this more often.

‘Fancy a few tandem passes for the camera?’ asks 992. I think the photographer wants us both in the same frame; it’s called a ‘pan shot’, apparently. ‘Sure,’ I say and position myself in front, experience before youth and all that kind of thing. We begin circling around for the camera at a decent clip and I glance at him in my mirror when he comes around a corner. I fancy myself on my nimble feet, and I have disc brakes, but I can tell immediately that he’s sharp as an otherworldly tack. I can only imagine how cleanly he’d handle a series of bends at speed; indeed, I’m told that he’s well nigh unbeatable at it. I feel more than a tinge of pride. 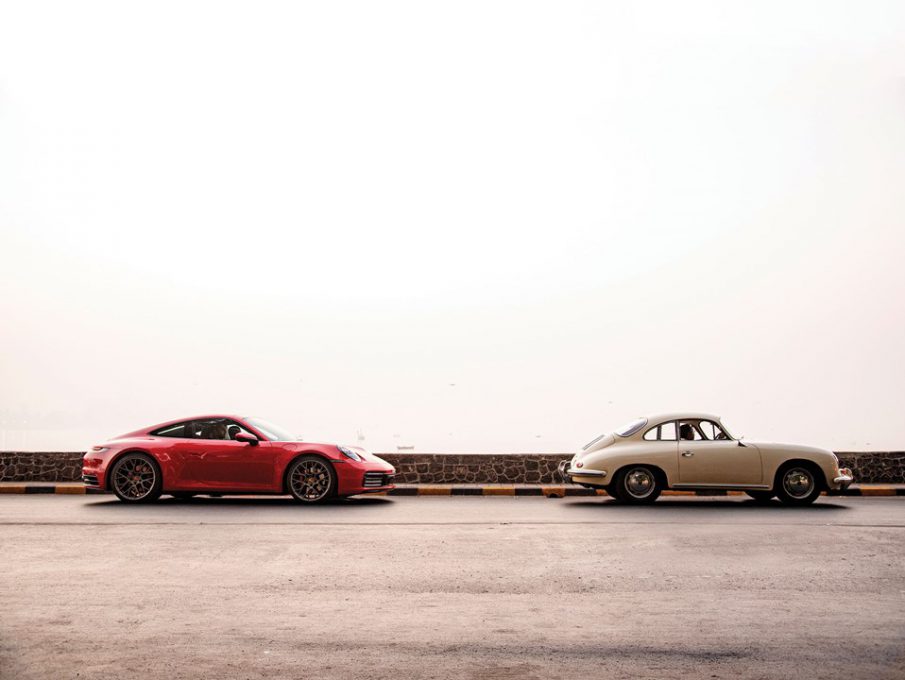 Our little outing seems to be coming to an end; the Motoring lot say that they’ve got enough photos. Pity — I would have been happy to drive around all day and 992 appears to feel the same way. ‘Are we done already?’ he asks, wistfully. As we wrap up, I feel a sense of deep satisfaction and a touch of sadness. It’s been wonderful to meet the fellow and I know that the feeling is mutual. It’s a mystery as to why I haven’t done this sort of thing before; I resolve that I’ll make more of an effort to meet the kids, here on.

He drives up to me. ‘Well, it’s been great to meet you. I hope I’m all that you thought I’d be — more, hopefully. See you soon, and look after yourself… dad.’ Oh hell, the idiot is going to make me choke up my carburettors. I clear my throat. ‘You’ve turned out just fine, young lad. Sorry if I came across as a bit gruff. Takes me a while to become comfortable. Off you go, then. I’m sure you have lap records to break and whatnot… son.’ And with that, I hook a sharp U-turn and lay rubber out of there.”