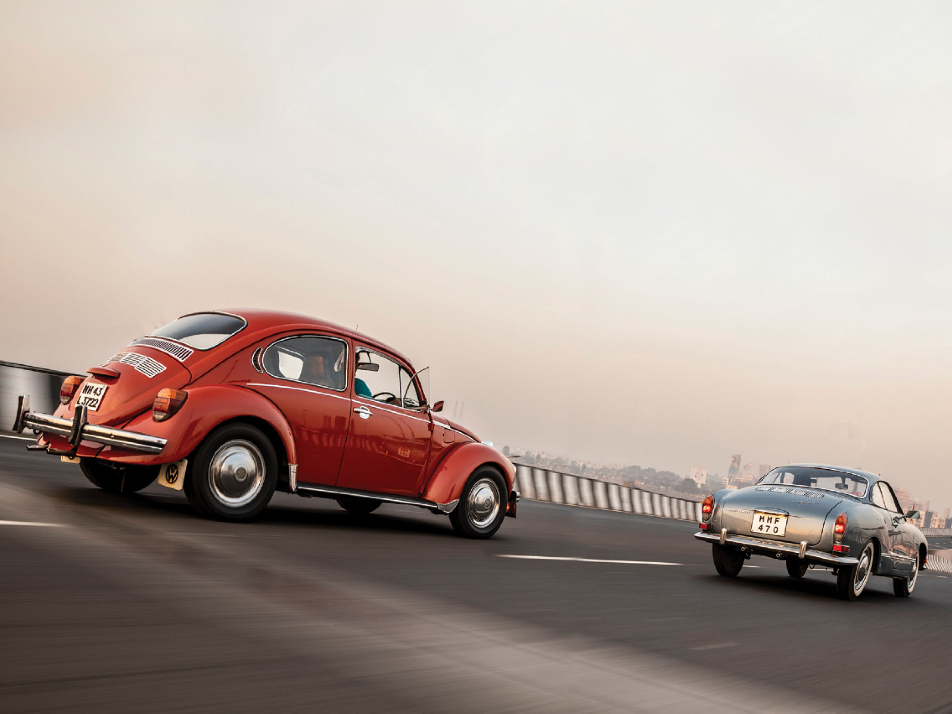 Siddhartha Khona has been a friend of the magazine for ages. I first met him many years ago, when I had tagged along with the vivacious Srinivas Krishnan – erstwhile editor of this magazine when it had the ‘Business Standard’ prefix to its name – to shoot Siddhartha’s Fiat 500 with an old Vespa. And since then, he’s grown his collection to include two VW Beetles and, wait for it, a proper Karmann Ghia, among others. When we told him that we’d like to feature his Super Beetle and the Ghia, he was immediately up for it and after the time and date were locked down, it was decided that I’d head to his place to drive one of the VWs, and he would get behind the wheel of the other.

The day dawned and I got there to find the cars already idling at the side of the road, being warmed up after being roused from their slumber. They made for a pretty sight, the Super Beetle draped in its Sundown Orange paint scheme and the sunlight seemingly bending around the contours of the Trout Blue Karmann Ghia. We set out, and I was driving the Beetle while Siddhartha was driving the Ghia just ahead. I couldn’t get over how composed and comfortable the Beetle felt, despite the potholes that Mumbai’s notorious roads kept throwing at it. The smooth ride quality was all thanks to that ‘Super’ bit that precedes the ‘Beetle’ moniker of this VW, and to see how this avatar of the Bug came about, we need to head back to 1968.

What was once known as the ‘People’s Car’ was now beginning to lose its sheen in what was the biggest car market in the world at the time – the United States. The new VW models, like the 411 and the 412, weren’t catching on. Kurt Lotz, the man who replaced Heinz Nordhoff as chairman of VW after his demise that year, had the tough task of getting VW back to the forefront. The Japanese car invasion had also begun, and the Beetle was now competing with the likes of the Toyota Corolla. Something had to be done, and Lotz decided to reduce the price of the prevailing Beetle and introduce a vastly improved version, which boasted of increased cabin and luggage space and improved comfort.

This new Bug was christened the Super Beetle, and despite its familiar silhouette, it was a substantially re-engineered car. The front suspension was now a MacPherson strut (the reason for the magic carpet-like ride quality that I was raving about) setup that required a new chassis and larger front panels. The spare wheel now sat horizontally under the bonnet, for the first time. These, and other changes, helped improve the space and overall comfort tremendously.

A lot of people seem to think that the Super Beetle was only sold with a 1600cc engine, but that isn’t true. Assigned the model number 1302S, the 1600cc Super Beetle could be had with a 1300cc engine as an option in Europe, with the smaller engined Bug losing out on the ‘S’ suffix to denote its lower capacity motor. Both power plants, however, were massaged to put out more power and to keep things from heating up, additional venting for more efficient ducting of fresh, cool air was provided.

This factory hot rodded Super Beetle went into production in 1970, and the one here was made in 1974. Powered by the 1300cc motor, Siddhartha’s car was brought in and registered in Mumbai by the UK Consulate, before it found its way to him.

Driving the car was an experience. The visibility through the ‘panoramic’ windshield was remarkable. OK, so ‘panoramic’ was VW’s fancy spiel for ‘curved’. Cars at the time had flat windshields and curved glass – something that we take for granted today – was a rarity and expensive, because it was harder to manufacture.

The Super Beetle gearbox is like the claw game you find in amusement arcades. Move the lever and you’ll be rewarded with the cog you’re looking for – or a teddy bear, if it were indeed the game I mentioned – but alternatively, a nasty sound caused by the gnashing of gear teeth will be heard if you don’t. It took some getting used to, and I did manage to master it somewhat. But honestly, even after I did, I would wince when changing gears, simply because I dreaded being the one who mashed the cogs in someone else’s prized possession.

The Super Beetle evolved from a utilitarian car that was supposed to get the masses enthused. The Karmann Ghia, however, was intended to stand out right from the word go. Volkswagen had realised that it needed to spice things up with its offerings. Coach builder Karmann was already building convertible versions of the Beetle for VW, and so it was the obvious choice to go to in order to snazz the Bug up. This is where history begins to get a tad murky. Depending on who you ask, you may be told that the Karmann Ghia design had its roots in a show car called the D’Elegance that was designed by a man called Virgil Exner, for Chrysler. Unfortunately, the American car manufacturer never put it into production.

As this story goes, when VW approached Karmann to produce a sportier looking car that was to be based on the Beetle, the coach builders in turn went to Italian design house Ghia for the aesthetics. Apparently, the designers at Ghia simply rifled through their past designs till they came upon their work on the D’Elegance, which must have been collecting dust in one of their storerooms. What Ghia apparently did was tweak the D’Elegance a bit to suit the Beetle, mainly eliminating the front grill (no need for that on an air-cooled, rear-engined car) and scaling the proportions down a bit to suit the diminutive dimensions of the Bug better.

Although the Karmann Ghia was basically a spruced up Beetle, the width of the chassis had been increased by four inches over that of the Bug. An anti-sway arm was fitted on to the front suspension, and the angle of the steering column was changed to suit the lower lines of the car. A few other minute changes were made to the springs, and some of the ancillaries in the engine bay were tossed around, but the biggest differences were the aesthetics and the stance, with the Ghia sitting seven inches lower and stretching about three inches longer than the Beetle. Curved glass was used in abundance, which was a deviation from the flat glassware that was the norm at the time. All this made the Ghia nearly 70 kg heavier than the stock Beetle – but so much prettier.

Apart from the doors, boot and the bonnet (basically all the panels bolted on the car with hinges), the whole Ghia was practically one big, flowing piece of sheet metal. There were no panel gaps, simply because nothing was bolted on and instead, small individual pressings were welded and finished by hand. This was probably done to reduce costs, as larger stampings needed bigger presses, which would require more money to procure.

To drive, the Karmann Ghia was identical to the Beetle, despite its svelte aerodynamic exterior hinting at more sprightly performance. VW even emphasised the lack of grunt of the Ghia in some of its advertising campaigns, to drive home the message that this car was meant to look fast – without having the horsepower to back it up.

The Karmann Ghia was the car you bought to be noticed in without actually breaking the bank. It was such a good looker that it went on to be known as the ‘poor man’s Porsche’, referring to its uncanny resemblance to the 356. About 400,000 Ghias rolled out of the VW factories in Germany and Brazil from 1955 to 1974, with the one featured in these pages having been manufactured in 1970 and brought into the country by the US Consulate. 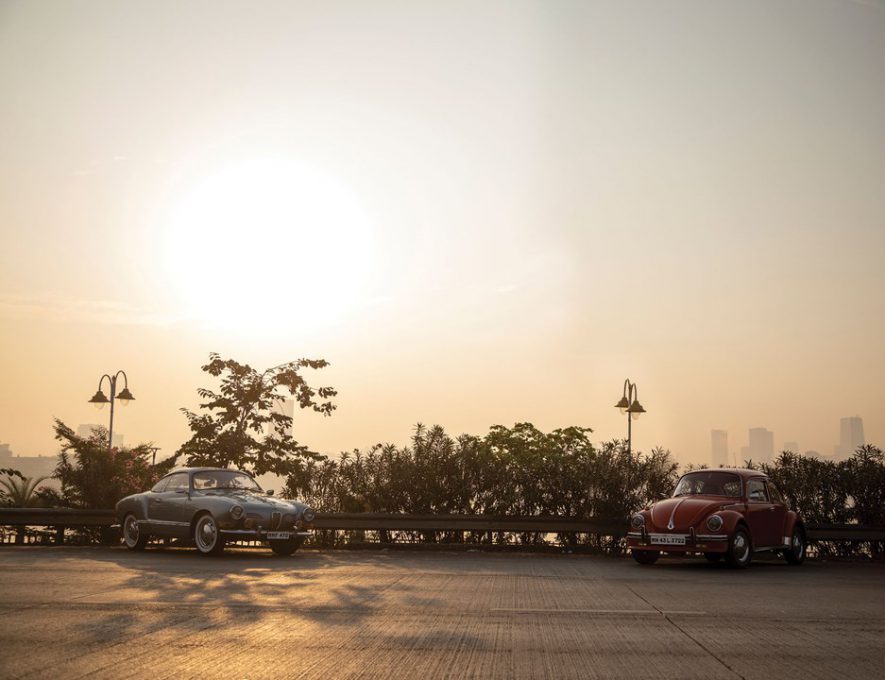 The Karman Ghia and the Super Beetle might have had the same hearts, but their souls couldn’t have been any more different. One was intended to conquer the aesthetic senses, while the other was conjured up using good old common sense to be a better buying proposition when the competition came calling. This was platform sharing at its very best.

Although the Karmann Ghia was the obvious winner when it came to sheer looks and rarity (in India at least), I’ve always been infatuated with the peculiar and iconic shape of the Beetle. And one that retained its lines, yet packed in more power along with practical facets like additional space and comfort ensured that the Super Beetle got my vote.

A big thank you to Siddhartha Khona for letting us loose in his prized VWs.