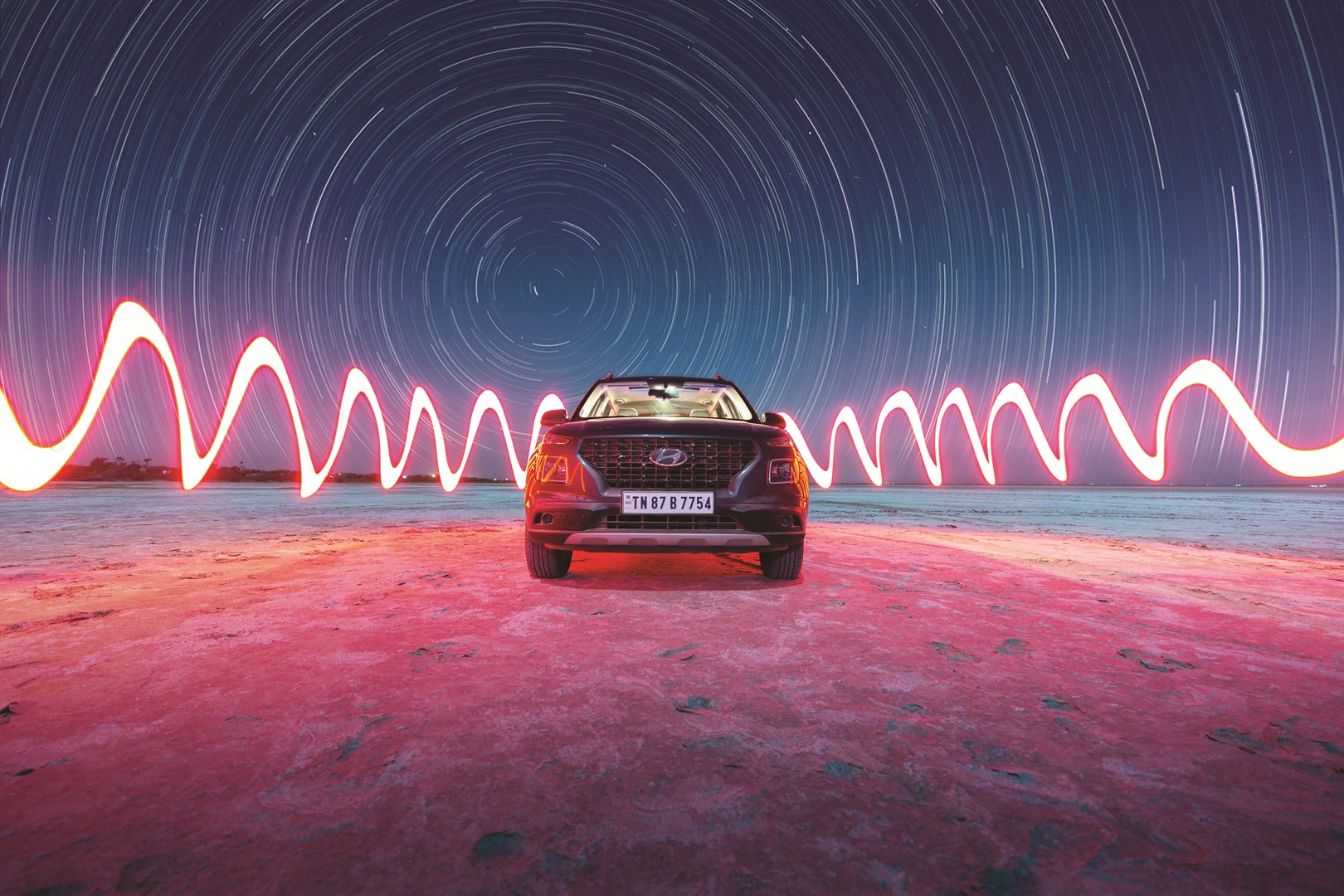 Be careful what you wish for, they say. We all wished to work from the comfort of our homes, but we forgot to ask that it should also be easy and without the danger of a pandemic hovering above our heads. So, then, wishes should always come with a disclaimer like the ones after mutual fund advertisements.

Why are we talking about this randomly, you ask? Well, as we write this, we are sitting in the middle of what is a limitless expanse of white salt flats under an infinite sky. To not wax philosophical is a waste of this glorious moment. At this point, we are at peace, as well. It is a happy, satisfactory feeling. All of this was possible thanks to the Hyundai Venue parked just a few metres away from us. Without it, this unforgettable experience would not have happened at all.

With empty roads beckoning us, it was high time we reconnected with ourselves and the world around us. And what better place to do that than at Sambhar Lake? This time, it wasn’t just about the high-speed runs on the glorious salt flat, it was about something far more serene. We took our trusty Hyundai Venue in search of pink salt and flamingoes. 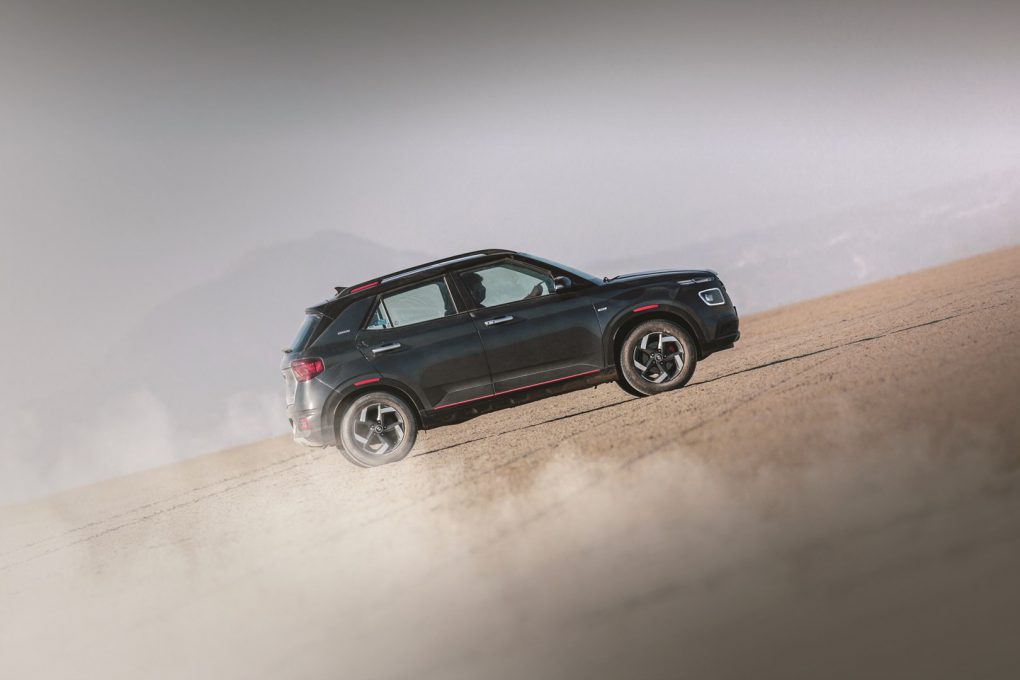 We left Delhi at 3 PM, which would have ordinarily meant we’d reach Sambhar lake, a 330 km drive, by dinner time. But then, what is a trip without a few changes in the script? Denser than usual traffic slowed us down while the FastTag lanes worked with a speed of a sleeping Cheetah. To add to our woes, we ran into a monumental traffic jam as soon as we entered Rajasthan. As darkness fell, we put on our explorer caps and ventured deep into the countryside, taking a circuitous route to the lake. From hills shining bright under a full moon to narrow single-lane roads that threw craters at us, it was a drive that took much longer than we thought.

Our Venue, with the new intelligent manual transmission and a fun 1.0-litre turbocharged engine was enjoying every bit of this drive though. From tackling bad roads to sliding through patches of loose sand, the Venue and its perfectly set-up suspension took everything in stride.

All this continued for another 300 km. By the time we had reached our destination, Camp Sambhar, at the edge of the lake, it was already half past three in the night. It had taken us 14 hours to reach the Sambhar lake! With our tents in front of us, the only thing we could think of was a long nap, the star gazing could wait.

Our naps were cut short by the sounds of multiple species of birds chirping though. We woke up just in time to witness a stellar sunrise just behind our tents. The vibrant orange orb rose above the dried trees and a late winter breeze accompanied it. An unhealthy amount of tea later, we were as active as we could ever be. Controlling the urge to go make our mark on the pristine lake bed, we decided to head out in search of local help to lead us to what we came here for.

The Sambhar Lake, and the village for which it is named, has a lot more to offer than just the salt flats. It has a history that dates back hundreds of years, and it’s even mentioned in the Mahabharata, if you are one to believe in mythology. In our quest for pink salt, we crossed tracks built by the British. The tracks led us straight to sections of land where the salt water is dried to make salt. These vast farms have a stunning pinkish-brown hue and offer a breathtaking contrast to the greyish-white monotony of the lake.

Keep following those tracks and they will lead you back to the city, one that has hundreds mansions dating back 100-150 years. The Venue, with its compact size, offered perfect maneuverability through the narrowest of the lanes. These narrow lanes, we were told, lead to another, smaller body of water. Just when it seemed like we were lost, the narrow lanes opened up into a clearing and what we saw there nearly stopped us in our tracks. If it weren’t for traffic behind us, we would have definitely stopped moving. 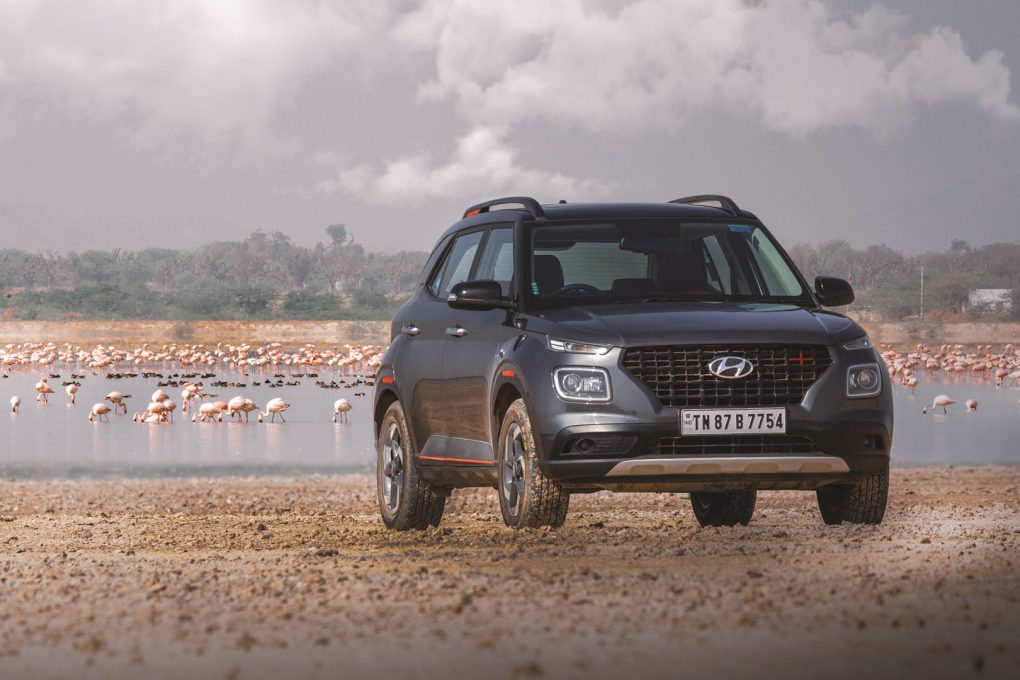 This was it, the reason we had come this far for. In front of our eyes was a flock of 5000 flamingos resting in the middle of the shallow pond. It’s an oddly spiritual feeling, seeing so many flamingos in one place. In that moment, our fatigue from the grueling drive evaporated. We spent the next few hours just basking in the majestic beauty of our surroundings. To use an overused cliche, words failed us in those moments.

As the sun started to set, we finally decided to let our Venue’s turbo-petrol engine pay its respects to the god of speed on the salt flat. It’s smooth iMT and excellent high-speed stability allowed us to experience the salt flat like we’ve never experienced it before. 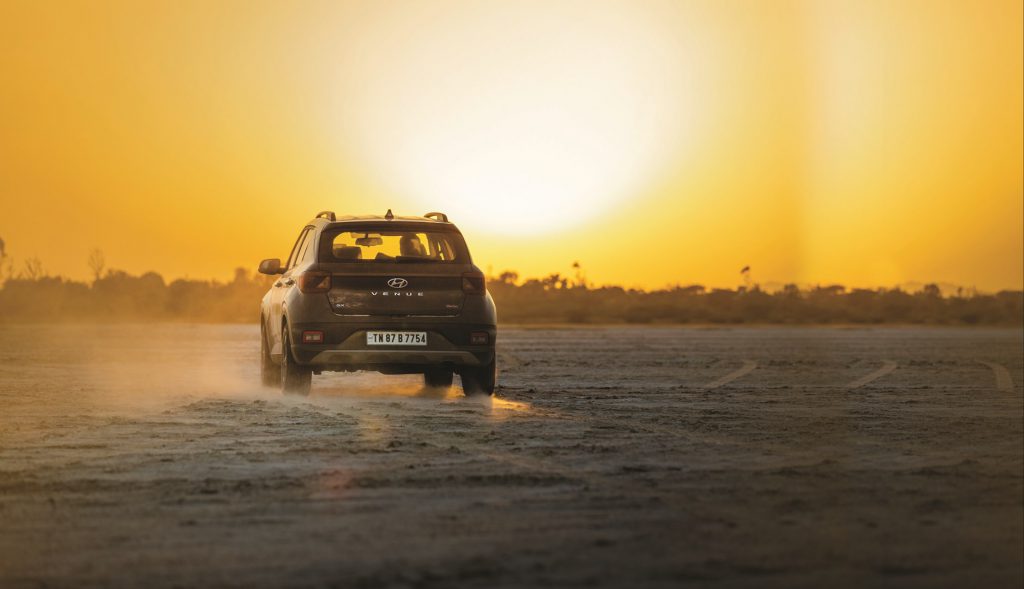 The trip ended with a little star gazing from the sunroof of the Venue. It’s no secret that we love the Hyundai Venue, but this trip proved to us that it wasn’t simply blind love. Every experience we had had during this trip was made even more special by the presence of the Venue.