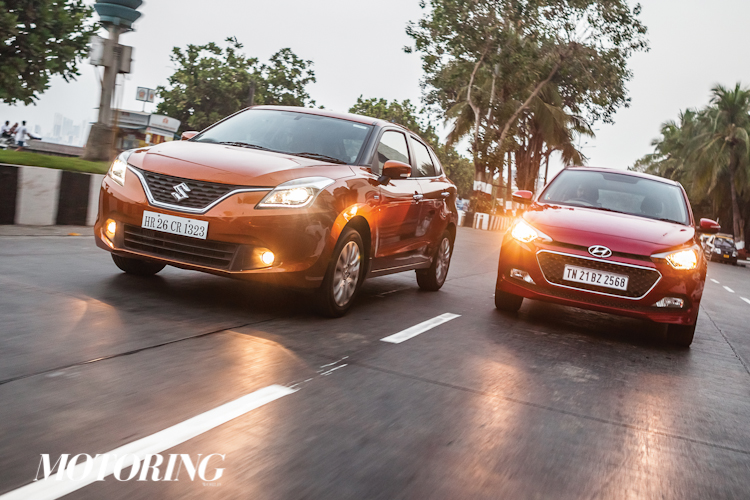 There’s been one default option for the discerning buyer of premium hatchbacks for the past couple of years, now – the Hyundai i20. It offers the best combination of style, features, space, ownership experience and value, but the new Baleno threatens to usurp it with an extra dollop of those things. Is it that easy to dethrone the king, though?

HELLO FROM THE OUTSIDE
The Hyundai is the established one here, so we’ll start with it. It’s evolved from a ‘surprised frog’ Korean-based design into something that can rub shoulders with the best of Europe. The wide trapezoid lower grille lends aggression but also a hint of ‘basking shark’ to the face. The headlamps are large and have brows that appear like LED running lamps. The mirrors have indicators mounted on them, the door handles are chromed and the wheels are diamond-cut alloys. The blacked-out C-pillar gives the impression of a floating roof, but undoubtedly the best view to look at the i20 is from the rear, those almost-Alfa tail-lamps stealing the show. The rear bumper is surprisingly docile compared to the aggressive front grille, which makes the design look a  little piecemeal.

No such problems with the Baleno. Yes, it’s a hatchback this time around, but the silhouette is a very pleasing, almost-fastback one. There’s even a chrome lip spoiler at the bottom of the rear glass, which looks like a nod to the Ford Escort RS Cosworth. Back to the front, however; the front looks extremely modern, with a bold ‘S’ logo on the grille underscored by a chrome strip that runs all the way through the headlamps. The headlamps themselves have bi-xenon projector units and LED daytime running lights on the top-spec version. The side is relatively drab with the noticeable exception of the silhouette, with no strong character lines and quite retro alloy wheels with interesting detailing. At the back is where things get interesting with LED tail-lamps that incorporate light guides in them and the reversing camera neatly tucked away under the chrome spoiler. The rear bumper is exceptionally high, but the height is well hidden thanks to the three distinct horizontal elements in it.

Of the two, the Baleno is undoubtedly the more modern design, but the i20 will age better, thanks to its mature approach to styling. We never imagined ourselves saying this about a Hyundai a few years ago!

On the inside, it’s much the same story — the i20 looks like a slightly dated design but the quality is evident. The blue dot-matrix display of the audio head unit can be swapped out for the colour touchscreen unit you see here. There is sat-nav onboard as well. The layout is a familiar one — a multi-function display sandwiched between speedometer and tachometer, and controls on the steering wheel. The new touchscreen unit adds quite a bit to the premium feel, thanks to its decent resolution. Everything in the i20 is familiar to us and it all works, from the automatic headlamps and auto-folding mirrors (the way they open out as you walk up to the car is extremely cool), but we don’t like the fact that the doors still don’t auto-lock as you set off. They’ll unlock  as soon as the engine shuts off, though.

The Baleno is a more modern car, but it eschews the beige bits that the i20 sports for a black-and-silver combination that works because of the sheer room in the car. Sure, there are a couple of low-rent bits like the window switches that have been purloined from the decade-old Swift, but the steering wheel and dials are from the Ciaz, which we love. The audio head unit is a capacitive touchscreen unit with all the things that the Hyundai has, including sat nav and Bluetooth telephony, but what the i20 doesn’t have is Apple CarPlay, which essentially turns the screen in the car into the screen on your phone. We aren’t sure if you can play Flappy Bird while standing in traffic, but you can surely run all your necessary apps while on  the go.

Both hatchbacks have a lot of room for occupants — the Baleno trades punches with the i20 here by offering more knee-room but less head-room for the rear occupants. There’s also an extra charging port for the rear occupants in the Baleno. The rear of the i20 is a better place to be in, the larger windows and higher roof imparting a sense of more space to the back benchers. Both offer appreciably large boots, but the i20’s is far more useable because the Baleno has an exceptionally high and narrow lip — something we foresee being a problem even when the spare wheel’s services are called for in a country where most people are quite vertically challenged. Special mention has to be made of the i20’s audio system: the front speakers are especially good quality components, although the sound itself isn’t tuned perfectly to  the cabin.

Both hatchbacks are at the cutting edge in terms of features: the Baleno has the bi-xenon headlamps, LED running lamps, Apple CarPlay, capacitive touchscreen and standard ABS to the Hyundai’s 6-speed gearbox, diamond-cut alloy wheels and auto-folding mirrors.

FAST CAR?
These are the quickest variants respectively of their ranges. The Baleno uses the Old Reliable of diesel engines, the 1.3-litre Fiat MultiJet that makes 74 bhp and 19.4 kgm. It doesn’t sound like much, but it certainly doesn’t feel like that when you’re driving the Baleno. It’s got the same surge to it as the original Swift, thanks to the turbo lag, and it revs clean to 5000 rpm, but all the action is from 2000-4000 rpm. The Hyundai also has turbo lag, but its peak torque is more spread out from 1500-2750 rpm. That, along with the 6-speed gearbox, helps it rush to 100 kph quicker. The i20 used to barely tick over at 1800 rpm at 100 kph, but the gearing has shortened to make sixth gear useable in the city. Both cars are equally drivable, but the Hyundai engine’s refinement and wider torque spread wins the day.

THE BENDS
Both cars, despite being large hatchbacks, give the city priority. The Baleno has to be commended for its sublime ride at any speed. Out on the highway, the Hyundai feels that little bit more planted despite a non-communicative steering that weighs up artificially around a corner. The Baleno sends much clearer messages back to the driver, but the great ride means a ‘floaty’ feeling at speed. Don’t get us wrong; both these cars will make great highway cruisers, it’s just that there are others in the segment that are more dynamically mature. Hold a gun to our head, and we’d have to pick… nah, just shoot us.

WEAPON OF CHOICE
Both these hatchbacks are automotive Jacks-of-all-trades. They have great cabin space, sizeable boot space, the capability to keep you fresh over your commute and happy on a weekend trip. They’ve also got a good features list that is lacking for nothing. The only thing that separates them is their refinement. Suzuki has opted for an engine that makes the Baleno dead reliable. However, the gravelly voice isn’t something you expect or want from something that looks as fantastic as the Baleno. The i20, on the other hand, for ` 20,000 more, ex-Delhi, offers the premium feeling that is the last piece in the puzzle of the premium hatchback. Had Maruti found an engine as refined as the i20’s (and a 6-speed gearbox), this story would have had a different ending. As it stands, though, the king remains just that — the king.