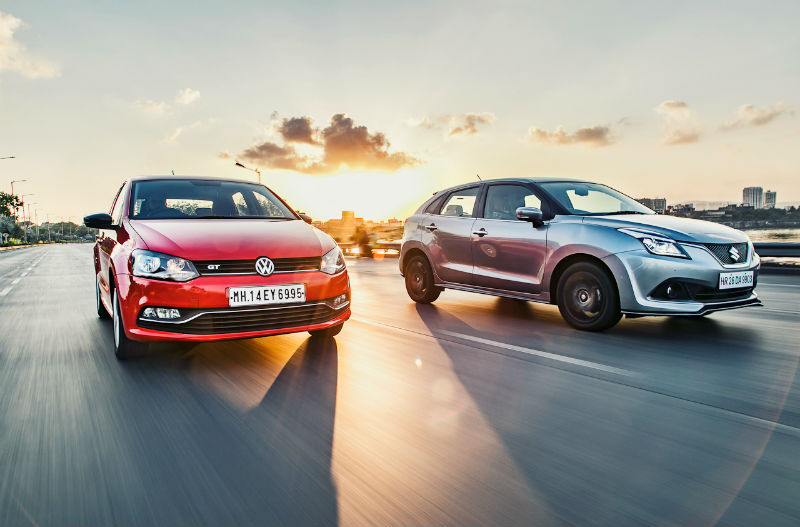 The Oxford dictionary’s official page list about a hundred ‘Two-Letter Words’, which goes on to signify the value of these length-restrained, self-supporting entities in the English language. And it’s true, that when called upon in the automotive market, they can very well change a car’s character, without the use of unnecessary lettering on the bodywork. More so in a segment which needs a fair bit of character more than anything else: midsize hatchbacks. With two of the finest examples on the market — the Maruti Suzuki Baleno RS and the Volkswagen Polo GT TSI — we see if they’ve been transformed, following the addition of a two-letter word, and change of heart — both figuratively and literally, that is.

Let’s start with the newest of the two, the Maruti Suzuki Baleno RS. Apart from the slightly different ‘RS’ (sorry!), it also has a new engine. It might be small but it matters where it has to matter the most; and that’s in the way it delivers power (101 bhp and 15.29 kgm). It’s called Boosterjet, which sounds quite cool, to start with. To keep up with said coolness, there’s the slightly stiffened suspension, and disc brakes on all four wheels.

That’s not an awful lot, if you want the onlooker to stop in their tracks, with their pupils dilated and knees weakened. But the target audience is not that; it’s instead the bunch of people who take pride in driving their cars and not necessarily in just ogling at them, or making the world do so, for that matter. Apologies for generalising, this bunch also won’t deny talking endlessly about their cars, and as a result, they prove to be a hot target for carmakers for all the ‘word of mouth’ publicity.

And the Baleno RS deserves to be talked about. Quite the first performance-orientated Maruti Suzuki in a long time, it has the right ingredients to make the driver happy. It’s lightweight, has a 5-speed manual gearbox, and all that’s packed in a chassis that’s not too loose. The power delivery is worth a mention, because bereft of a sudden surge that might have you pointing at the armco, the RS is more linear with power. For a millisecond or ten, it does help build the anticipation, but once closer to 2000 rpm, the Boosterjet offers an almost NA-like surge. You wouldn’t mind driving one after your old, naturally-aspirated Suzuki hatchback, and it’s almost certain that you wouldn’t take time getting accustomed to this one, either.

It can spin its front runners at order, and stays stable in corners as well. The steering is light enough for most everyday tasks, although it does restrict the amount of fun you can have, due to the lack of weight. With disc brakes on all four wheels, it loses speed equally brilliantly. The tyres’ pride does take a beating, though, because they aren’t quite made for the RS. The moment you drive harder, the tyres begin to complain. It won’t have looked out of place on a regular version, but on the RS, something with more grip will suffice — and hence make the power and the chassis balance more useable.

The Volkswagen Polo GT TSI, on the other hand, has no such concerns. We’ll come to its limitations in a few hundred words, but let’s just appreciate the car which has, almost single-handedly, been responsible for sales in the segment. The 1.2-litre TSI engine is larger than the Boosterjet but is similarly powerful, at 103 bhp and 17.84 kgm. And unlike what the conventional definition of a hot hatch might make one believe, the 7-speed dual-clutch gearbox happens to add to the whole experience. Despite the weight disadvantage (kerb weight: GT TSI’s 1109 kg vs the RS’s 950 kg), the conjunction of TSI and DSG gives the GT a sense of urgency (that’s something more ‘RS’ than ‘GT’, but still!). The steering is weightier, which means it adds a tinge of confidence, while the improved connection with the chassis means you’re likely to carry more speed, more confidently in this than in the RS.

You sit lower — or at least that’s how it feels — in the GT TSI, which further adds to the whole feeling. The car, with tyres that are perceivably better, is easier to chuck into corners, and rewards with an unmistakeable poise. The quick (-witted, too) gearbox minimises the chances of selecting the wrong gear, and thus, in a very Gran Turismo (no, not the car, but the game) sort of a way, makes it all just perfect. Where the Polo loses pace (not literally, sadly) is the brakes. They lack bite and the urgency which is associated with the engine/drivetrain.

It’s not quite the Mini vs GTI, this quick comparison, but the Polo GT TSI is evidently closer to the idea of a little, lukewarm (if not properly hot) hatchback, than the Baleno RS is. And that, to a large extent, comes down to how the two are, in their regular spec. The Baleno is an easy-to-drive car, with lots of space, and an effort by Maruti Suzuki to cater to those looking for something more premium/better-specified than a Swift. The Polo, which was happy rivalling the Swift, until the Baleno showed up, had certain traits, in its non GT avatars as well. Strong build, a bland dashboard design which feels more premium and better put together, and spot-on dynamics, to name a few. The negatives aren’t too different, either, like in case of the Polo, it’s conservative in the styling department, lacks space inside, and is unlikely to offer 100 per cent control — there’s no launch control, if you were wondering. The Baleno RS’s deficiencies aren’t a deal-breaker per se, but the steering is vague, it doesn’t feel special, and as Raunak correctly pointed out, the in-cabin rear-view mirror takes up a lot of space on the windscreen — effectively reducing the view of the road ahead.

That’s not to say the two-letter words haven’t made a bucketload of difference to the cars, if not transformed them. And semantics aside, the GT and RS can continue to sit atop the respective line-ups, because they do represent the best factory-made versions of the two cars (we aren’t counting the GTI because that’s in a different segment and is undeniably hotter, but the CBU pricing is far from ideal). The Baleno RS gives the driver a tad more control over the car (can’t beat the advantages of having a manual gearbox), lets them have more fun, but offers a decent ride and handling setup at the same time. The Polo GT TSI has more appeal as a package, and then given that it’s been around for quite a while, the number of after-market updates available for the car is outstanding. The latter will be helpful should you plan to make the GT more focussed.

Choosing one among the two requires a little compromise. If you’re looking for more practicality (without the convenience of an automatic gearbox), the Baleno RS takes the cake. On the other hand, if you can live with fewer millimetres of knee room at the back, the Polo GT TSI is our pick. That’s the thing about the not-so-hot hot hatchbacks: they have a wider appeal. They are like the two-letter words; ye don’t even know how better life’s with them, until ye have one. Buy one, eh?

As published in the June issue of Motoring World.