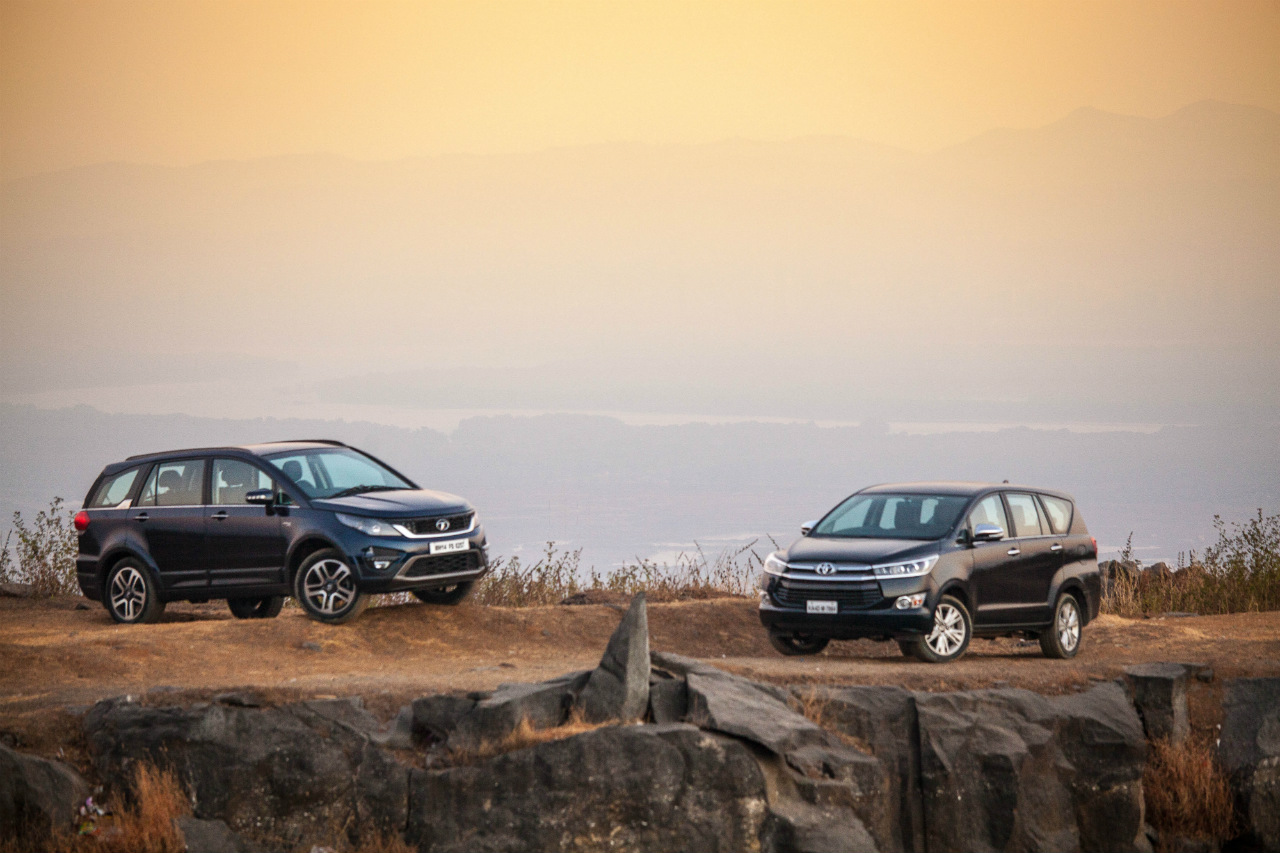 Not exactly, to answer the question posed in the intro. It’s a matter of pride that MPVs in India have reached a scale where the comparison test, in its typical context, is somewhat redundant. The MPV scene has reached such a peak today that you have the opportunity to choose from between foldaway food trays, privacy blinds, split air-conditioning, mood lighting, projector headlights and so on. It’s no longer about whether you’d like wheel caps or not and that paints a pretty picture of the evolution of the MPV in India.

The Toyota Innova has had much to do with the MPV space reaching this near-equilibrium and now, with the second-gen AN140 model, the Crysta has cemented the fact that the MPV is here to stay, no matter what new kind of SUV anyone comes up with. This is good news for Toyota and also for Tata, which has reinvented its answer to the Innova (the original being the Aria) in the form of the Hexa. It would be a gross injustice to call either of these MPVs ordinary because they are anything but that. The list of features on either car is longer than their respective wheelbases and their well-appointed interiors are genuinely welcoming, while the contrasts in layouts and space management make it all very interesting. What’s also interesting, if a bit complex, is the array of powertrain options available on either car.

It’s not over yet. Because then there is the small matter of variants. The Hexa is primarily a seven-seater across all variants with a 6-seat option being exclusive to the range-topping XTA 4×4. This brings the Hexa’s variant tally to a neat seven, including options between manual and automatic transmission. Isn’t seven a lot to choose from? Then try sixteen. Because that’s how many variants the Innova has. Yes, you read that absolutely right. I don’t think being a sales executive at a Toyota dealership is a very popular job these days. So complex is the Innova’s variant break-up to explain — let alone sell — it’s probably in violation of at least labour laws if not the human rights of the poor sales rep.

Fortunately, our comparison story is narrowed down to just two — rather than all twenty-three — of them and that should make life easier. But it doesn’t. That’s because the Hexa and Innova Crysta are more or less even, despite their dissimilarities, in every aspect. We’re comparing the top-spec diesels here (although the Innova’s turned up with an auto ’box, but we’ll ignore that) and despite the easy-to-spot difference in specifications, there is no clear winner. The Hexa and Innova are such evolved specimens of MPVs, their comparison is no longer possible through numbers but only through attitude. The last time I checked, we were saying such things about Ferraris  and Lamborghinis!

So, you step inside the Hexa and are immediately welcomed by a very modern and elaborate interior. The sense of space is prominent because there actually is that kind of space available on the inside. The familiar steering wheel aside, everything on the inside is brand-new (no Aria leftovers) and looks and feels good. This is undoubtedly the most sophisticated interior ever to have rolled out of the Tata plant and it really shows. Be it the contrasting stitching on the seats, the anti-paparazzi sun shades in the middle row, the humongous centre armrest with a generous storage bin underneath, the neat door panel trim or even just the dashboard’s expanse — it all feels patiently crafted, with the right intent. I genuinely couldn’t find anything to be unhappy about inside the Hexa and a combination of this kind of space and comfort is something you just can’t help but appreciate. It’s almost, dare I say it, Land Rover-ish.

The Innova is equally good, perhaps better in some areas, but you can see that Toyota’s designers have had to work overtime to suffix the ‘management’ into the ‘space’ it has to offer. The Innova’s is clearly the smaller shell of the two and the way its interior is laid out is simply fantastic. Toyota has certainly used better materials for trim and even the usual surfaces and I particularly like the upward-tilting lip the dashboard sports. It’s all very swanky and cool inside the Innova, and the captain seats in the middle row are definitely the place to be when on your way to making those multi-crore real estate deals. Those in the middle row also have a collapsible food/laptop tray to themselves — definitely a very thoughtful addition by the ever-so-insightful Toyota guys. Is there a better interior from between these two? I like the Hexa’s for its space and plushness, but the Innova’s interior is definitely cooler and feels like it will handle ageing in a more dignified way.

What are they like to drive? Not similar at all, thankfully. The Hexa tries little to camouflage its size and immediately feels like a big, muscular SUV — something the Indian buyer (not your average soccer mom) will undoubtedly appreciate. It feels ever-so-slightly lethargic but never unrefined or burdened and that sort of goes with the Hexa’s character, that of being relaxed and relaxing. The manual gearbox retains, to a very minute extent, that soggy Tata mechanical feel, although it in no way hampers progress. The Hexa gathers steam rather impressively and even though it won’t shame sedans of its price range, it comes across as friendly and sufficiently potent for those long getaways. I’d love to drive one to Goa, or even be driven in
one — honest!

The Innova, on the other hand, has this robust, almost-Fortuner-like feel to it which is immediately endearing. It’s got a crisp, intuitive demeanour that can only come from the likes of an experienced manufacturer like Toyota, although I must say in the same breath that the automatic gearbox does stretch the motor a bit, creating a fair bit of engine noise. That said, it settles into its rhythm in a more car-like manner and if you’re one of those tailgating, headlight-flashing types, you’ll love the Innova. This car is living, diesel-chugging proof of why it’s so successful; it’s an honest-to-goodness, built-to-last car that makes these very qualities instantly apparent from the moment you step into it. This is something the Indian buyer finds harder to resist than something with the word ‘Free’ written on it in big, red letters.

Having said that, I must add that the qualities of either car are rather subjective and this applies strongly to their ride and handling characteristics as well. I like big cars that feel and behave their size, and it’s for this reason that I have never fancied owning a Porsche Cayenne — not that I can afford one anyway. This may not be to your liking, in which case you will definitely find much to cheer about with the Innova. No, it certainly isn’t a Porsche in any way, but it does come across as more car-like in the way it responds to steering inputs and also in how its suspension behaves.

A lot of it is down to its narrower 16-inch alloys — 205/65s as opposed to the Hexa’s 235/55 19-inchers and, in terms of handling from the enthusiast’s perspective, it’s the Innova that fares better. The Hexa’s inherently good off-road genes just cannot be ignored, however, and this is further complemented by the presence of a 4×4 unit. The Hexa also offers four driving modes (Auto, Comfort, Dynamic and Rough Road), selectable via a slick rotary knob, and the way in which it handles off-road sections is genuinely admirable. Let’s see how it fares in this year’s Slush Fest, eh?

Finally, is it true that neither is the truly better car? Yes, I’d say so. India is, whether you approve or not, a rather diverse democracy and to have one standard formula for what is ‘right’ goes against our very philosophy as a nation. A lot of you (or should I dare say ‘a majority’?) will prefer the Innova for being the excellent premium MPV that it is, while finding absolute merit in its steeper price tag. And then, there will be the rest of you who will prefer the Hexa’s outdoorsy, borderline-SUV persona. I’m definitely more of a Hexa person, but a poll in the office reveals the Innova has the larger vote share. That said, neither of you will be entirely right or wrong, but either way you will end up with a genuinely modern, uncompromised, feature-rich and truly fulfilling MPV. What a long way we’ve come, haven’t we?

YOU CAN ALSO HAVE A…

The XUV is the properly butch SUV alternative to moving your family around. It’s very capable on and off the road and is certainly the one to go for if you don’t want to look like the adventurous types.

If you dislike between two to three members of your family, the Elantra is a nice way to make sure they’re never around on those precious holidays. It’s a terrific sedan with lots of space and is fun to drive, too!

Not a fan of families at all? Why not get yourself a go-anywhere motorcycle, then? The Multistrada Enduro will go everywhere even your average SUV won’t and you will be remembered as the cool, rugged sort. And not as a van driver.

[As published in the February issue of Motoring World]