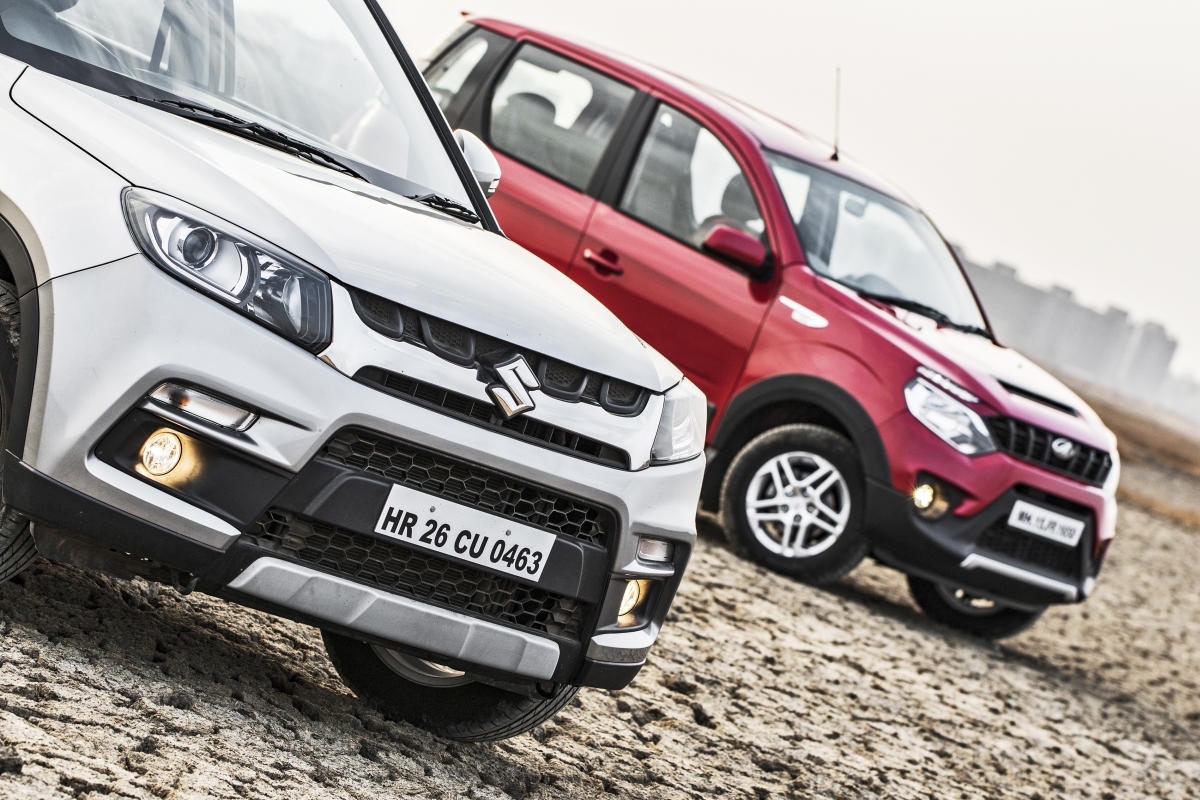 Remember those games you played as a child, where you had to get through the maze to the exit and you got timed? If you get the grown-up version of those games, you’ll find yourself amazed (a-mazed – see what we did there?) at how intricate they can be, but also that the exit can have more than one route to it. That’s what we have here: the Maruti Suzuki Vitara Brezza, which makes no bones about being a car that go down that dirt track that looks so inviting. The Mahindra Nuvosport, on the other hand, has a ‘propah’ SUV ladder frame chassis that has been refined to the point where it is good to drive on tarmac. Which is the better route to the exit, though?

CLOTHES MAKETH THE MAN (or car)

Whether we’re buying a small city runabout or an SUV big enough to give the Arjun MBT an inferiority complex, we want the car to look good. The Brezza achieves that admirably – after all, it has a larger cousin of similar nomenclature to draw inspiration from, and most of all, it’s got its proportions right. Most sub-four metre SUVs struggle with the restriction on length, and right from the Premier Rio on, they’ve looked like somebody ran into their backsides. Not so with the Brezza – not only is the rear overhang proportional, it also manages to stow the spare wheel under the boot, in its rightful place. The front isn’t all gaudy chrome, thankfully, making do with a prominent chrome bar between the projector headlamps, and in an interesting twist, the turn signal indicators are mounted low on the bumper, just above the fog lamps. move around to the side and the great proportions become apparent – the profile is vaguely RR Evoque, and the better for it. The roof and the waistline look like they’d meet at the back, given enough length. The Nuvosport is a far more confused design – it is undeniably aggressive, to the point where a single polite honk will move any road user out of the way without complaint, but the front looks like Ice Cube; could have looked better, but it just permanently angry. Mahindra also seems to be moving away from the cleaner designs of the current Scorpio and the facelifted XUV; the KUV and now the Nuvosport have so many different elements, and not all of them gel. The LED running lights, for example – they’re separated from the headlamps by a thin strip of metal, and the hood scoop also vies for your attention along with the grille, which has both vertical AND horizontal elements. Below this, there’s a small horizontal gap before the matt black mounting point for the number plate, followed by a honeycomb mesh and finally the silver faux skid plate. From the side, the Nuvosport looks a generation older than the Brezza, with its large windows, upright pillars, horizontal roof and zero rear overhang. We can’t deny that the split-spoke wheels are a very tasty addition to the vehicle, and the smoked tail lamps are certainly something that a few of us like, but overall the Brezza looks better on proportions alone. The DRLs, tail lamp LEDs and projector units are all bonuses.

NEVER JUDGE A BOOK BY ITS COVER

Here’s where things get really interesting. The assumption is that the Brezza, because of its front-engine, front-drive monocoque architecture will have much more space than the Nuvosport and its ladder-frame, front engine/rear drive  construction, but the only real difference is in the usable boot space. The Brezza seats you low, like a car, and you feel cocooned by the high sills. The Nuvosport cabin has to be climbed into, but the large windows offer a feeling of airiness that is absent in the Brezza. The Suzuki offers a better driving position, thanks to its car-like ergonomics, but the Nuvosport hits back with adjustable lumbar support. There is height adjustment on both, but the Nuvosport follows the Duster’s ‘terrace/basement’ philosophy of seat height adjustment. The Nuvosport also needs to have a wider dead pedal if it is to be comfortable on long drives.

The Brezza offers the more cohesive design on the inside, as on the outside, but it isn’t the runaway success we were expecting it to be, especially on the features front. The Nuvosport is a pleasantly surprising offering as far as features are concerned. There’s a very aftermarket Kenwood system that does all that you require, with an aux in, Bluetooth audio streaming, phone connectivity and iPod connectivity. It’s quite slow to respond to calls, though. There’s a multi-function display at the top of the centre console that gives a wealth of information (ambient and cabin temperature, engaged gear, etc) but its positioning is very strange. The amount of information the Brezza offers in comparision is stingy, but it displays it all from a very modern-looking instrument cluster in which you can choose the colour of the lighting thanks to the LEDs that light it up. The features list is truly impressive with the Brezza – you can include Apple CarPlay, satellite navigation (if you have the maps loaded on the removable SD card), keyless entry and go, electrically foldable mirrors, climate control, automatic headlamps and a reversing camera over the Nuvosport. What it doesn’t have and the Nuvosport does, is leather upholstery, armrests for the front row, and a second row that tumbles forward to augment the boot space. Both have a 60:40 split for the second row, and the Nuvosport has two jumpseats in the boot if you plan to carry along children for short drives. We aren’t in favour of these seats because not only are they exceedingly uncomfortable for anyone but children, there is also no seatbelt to hold the occupants in position. Thanks to the jump seats and the sideways-hinged rear door, the Nuvosport isn’t as usable as the Brezza. You’re also going to have  a much easier time with the Brezza if you ever have a puncture, as the spare wheel is under the boot floor in the traditional space.

Refinement stays firmly in the camp of the Mahindra (bet you weren’t expecting that!) even though it has a three-cylinder engine and a ladder frame chassis. The occupants of the Nuvosport are always insulated from sharp ridges and the engine is a faraway drone, while the Brezza occupant will feel the road surface much more, and will never be in any doubt as to what is powering the vehicle. Of course, the Nuvosport engine shudders to a halt in the same way that the Scorpio and Xylo do, but it isn’t enough to hand the Brezza the mantle of better refinement.

A QUESTION OF POWER

Both cars have an equally interesting approach to their motors – the Brezza uses the tried-and-tested 1.3-litre Multijet, labelled ‘DDiS’ here, and it generates 89 bhp and 20.4 kgm. It doesn’t really need to generate much more, really – at under 1200 kg, the Brezza is as light as a modern hatchback. The Nuvosport is portly at nearly 1600 kg, so it needs the extra shove from its 100 bhp/25 kgm engine. However, it must be said that on unpaved roads, the Nuvosport manages to comfortably outrun the Brezza mostly by virtue of the power being sent to the rear end, and an amazing torque spread. Keep the Nuvosport in ‘Power’ mode and there’s enough torque almost off idle to haul it cleanly to triple-digit speeds. Try this even in third and fourth, and there isn’t any grumbling from the motor; something that is pleasantly surprising from a three-pot engine. The two-stage turbo does its work exceedingly well. ‘Eco’ mode cuts power and increases fuel efficiency, but is useless for quick overtakes – it takes a while before you get used to switching modes instead of releasing the fuel filler cap. There’s also cruise control and a Start/Stop system onboard. That’s not to say that the Brezza is bad – it retains its fun character, with lots to be gained by revving it to its redline. However, the Nuvosport’s lack of turbo lag trumps all here.

Ah, the question for the ages. While attempting the dual pan photograph, the Brezza couldn’t keep up with the Nuvosport, simply because it was feeding the ‘wrong end’ the power. The Nuvosport in Power mode was also a right laugh, kicking its tail out with some coaxing. The Brezza is certainly the better handler on tarmac and will also be quicker in most situations, but show both a bad road and the Nuvosport will invariably manage it better. It is the result of it being developed of the lighter, stronger and younger current Scorpio’s ladder frame chassis, and the folks at Mahindra deserve a pat on the back for getting it to behave so well. We aren’t chickening out on the verdict here, but if you’re going to use your small SUV to commute on good roads, pick up the Brezza. If you’ve got bad roads on the horizon over the weekend, the Nuvosport is definitely the way to go.

We’d come to this review prepared to hand the Brezza its crown all over again – the EcoSport is the acknowledged second-best in the segment, after all. However, we didn’t count on the Nuvosport being so refined, so powerful and so much fun. Of course, the design could improve, and that head unit really needs to take less than five seconds to respond to a call, but the engine and bad-road capability of the chassis run the Brezza a lot closer than we imagined it would. There’s also the one thing we haven’t talked about yet: for the price of the Brezza you can have yourself a Nuvosport with an AMT gearbox, which is an undeniable bonus if you’re going to commute a lot. As it stands, though, a price difference of just Rs 30,000 ex-showroom isn’t enough for the Nuvosport to seem like good value for money compared to the Brezza, but we sure wish it pulled off the upset. This one time, we must admit that either route through the maze will get you to the exit – it’s truly a matter of personal choice.