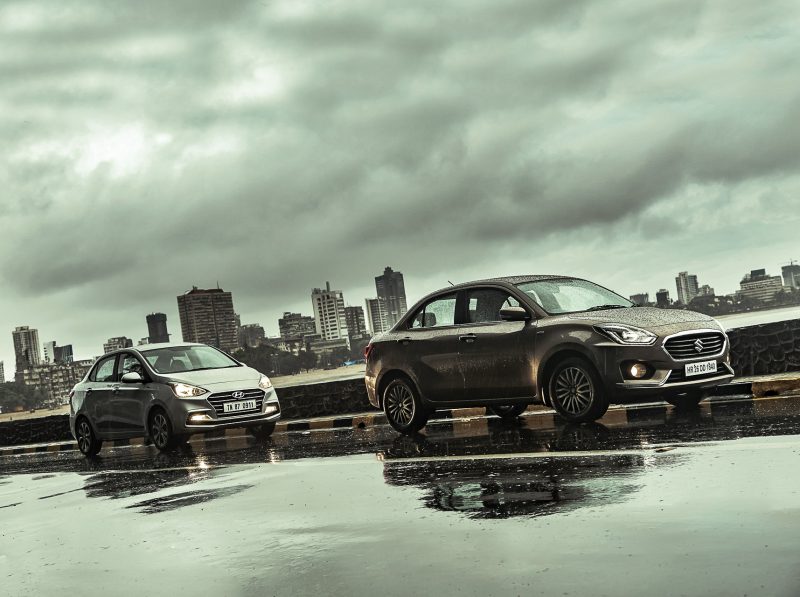 The effusive write-ups that these two have received recently makes life a lot harder than it should be for us. Let’s get one thing out of the way immediately, though: the new Hyundai Xcent and Maruti Suzuki Dzire are the results of a carefully plotted evolution that will affect the buying habits of thousands every month. Not that it’s any of your concern, and it shouldn’t be, but Maruti and Hyundai have taken their cars very seriously, and if we can step back for a second and just applaud the fact that they’ve gotten so much right, that would be great. I’m not seeking a standing ovation for the two here, but a simple nod of approval would suffice.

They really have stepped things up considerably. If I may go back to a point I was making, it’s noteworthy to see that both have, when I’d reviewed them individually, rendered me inarguably impressed. In fact, I’d even go so far as to say that their reviews read much the same — hardly a complaint worthy of the word, effectively competent at most things, and a lovely driving experience, especially when the handbrake inexplicably comes up around a corner. I’m not the only one, either (okay, maybe I’m the only one who enjoys the handbrake as much); the consensus is that these two cars are fantastic efforts and worth every bit of their asking price.

Side by side, though, it’s a different story, which is what makes this an interesting comparison. It’s not day and night, but it is cheese and a, well,, different kind of cheese. I believe that’s a big enough chasm to merit a write-up, though. The subjective bits first: I quite liked the way the Xcent looked. It was a handsome approach with nothing over-the-top. The proportions were right, the chrome wasn’t overbearing, the LED DRLs at the front brought in a fresh angle, and the re-done tail-lamps were a huge step from the down syndrome-infused ones on the pre-facelift model. Everything seemed to be going well… and then the Dzire parked up next to it. Ouch. Now, I’m not saying that it’s like asking Jason Acuna (or Wee Man, as he’s better known) to take a lay-up, but I’m certain that you’d feel better knowing that Lebron James was doing it, especially if you had some money down on it. Put simply, the Dzire does a better job of standing pretty. Like I said, though: it’s subjective, so feel free to differ.

Where there’s very little room to differ, however, is in the way these two drive. The Xcent’s new 1.2-litre diesel makes a useful 74 bhp and 19.4 kgm, and the reason I said useful is because it’s just that. It isn’t lethargic, it doesn’t make a lot of noise, it isn’t plagued with turbo lag, and it doesn’t feel underpowered. Its useability and driveability make it ever-so-graceful in traffic, while the open stretches will see a bit of panting, but that’s only at speeds that will fetch you a righteous fine (were our infrastructure less dated, that is). It’s just thoroughly useful. It’s the sort of engine that will allow you to minimise impatience on the road (and God knows a fair few of us need just that), all the while giving you some tremendous efficiency figures. Anywhere between 2000 rpm and 3500 rpm is the sweet spot, so you’re bound to have a good time if you keep it in that range.

What helps things along is that slick 5-speed manual gearbox. Hyundai doesn’t serve the diesel Xcent with the option of an automatic or an AMT, but going by the way the manual behaves, I hardly believe that’s a marking down for the Xcent. It’s not as quick as a short-throw gearbox, then again you’re not going to be challenging Corvettes down Palm Beach road, are you? What it is, though, is a light and easy-to-row-through lever, and it helps that the clutch is light, too. Like I’d highlighted in my review, probably the best aspect of the Xcent with the new engine is that it allows you to think you’re going a lot faster than you actually are. It’s a remarkably good car, really.

Then, there’s the Dzire. Here in the diesel auto variant (the manual wasn’t available), it’s up a cylinder, but makes almost identical power and torque at 74 bhp and 19.3 kgm. What’s interesting to note is that is that it drives nothing like the Xcent. Where the Xcent’s engine power is distributed nearly linearly all through the rev range, the Dzire makes do with a little lag initially, only to give way to a hard kick once the turbo is on song. And unlike the Xcent, the Dzire doesn’t lull you into a false sense of speed. You’re aware of the speed you’re doing, and that’s that. Maruti spoke of some considerable weight loss for the Dzire, but it’s not immediately apparent in the diesel Dzire. It feels average in the way it gathers pace, and I’d hoped that it felt a bit more sprightly than it did. It can’t quite match up to the Xcent in this regard. Where it does gain some points back, however, is in the way the steering feels so direct and sharp compared to the Xcent. And while the car we had on test for this shoot was an AMT ‘box-equipped Dzire, my earlier drive in one was with the 5-speed manual, so it’s easy to note that the controls feel light enough to brave incessant traffic, and at the same time liven things up when speeds increase and there are a few corners to be had. If I had to pick the better ‘box between the two, though, it would have to be the Xcent’s.

What of the ride and handling? Well, both are able performers, but once again the Xcent manages to edge ahead because of the way it feels more lively when it’s being hustled. They’re both mighty good at handling rough roads and stop-start traffic, but the Xcent  is where I’d prefer to be if I was in  the driver’s seat down (or up) a  winding road.

And then, finally, you have the insides. As far as fit and finish and aesthetics go, I feel the Dzire’s got a big leg up. The Xcent is no bad place to be in, mind, but it’s just that the Dzire will make you feel happier. It’s plush, the touchscreen looks and feels better, the climate controls are easier on the eye and nicer to operate, and the all-new dash just looks better than the Xcent’s. Even the seats are more comfortable, while there’s ample space for five  in both.

Picking one over the other, then, isn’t as simple as you may think. Going by how cut-throat the segment is, price tends to be an important differentiator, and the Xcent undercuts the Dzire by a bit in that sense. The Dzire starts at ` 5.45 lakh and goes up to ` 9.41 lakh, while the Xcent comes in at Rs 5.38 lakh and balloons to Rs 8.42 lakh (both ex-showroom, Delhi prices) for the top spec variant. The answer is right under your nose. It all boils down to what you require a compact sedan for. If it’s nothing but lounging lazily at the back whilst a driver ferries you around, the Dzire’s potent mix of comfort, aesthetics, and features should seal the deal for you. If, however, you do like to do a bit of driving yourself, the Xcent is your bet, especially if you want the diesel. That said, if you want the petrol option, then the Dzire’s a better buy thanks to that willing engine. But its gearbox’s notchiness would keep coming in the way, so maybe the Xcent is a better bet after all. But then the Dzire looks so much better. Then again, that’s subjective. Sigh…