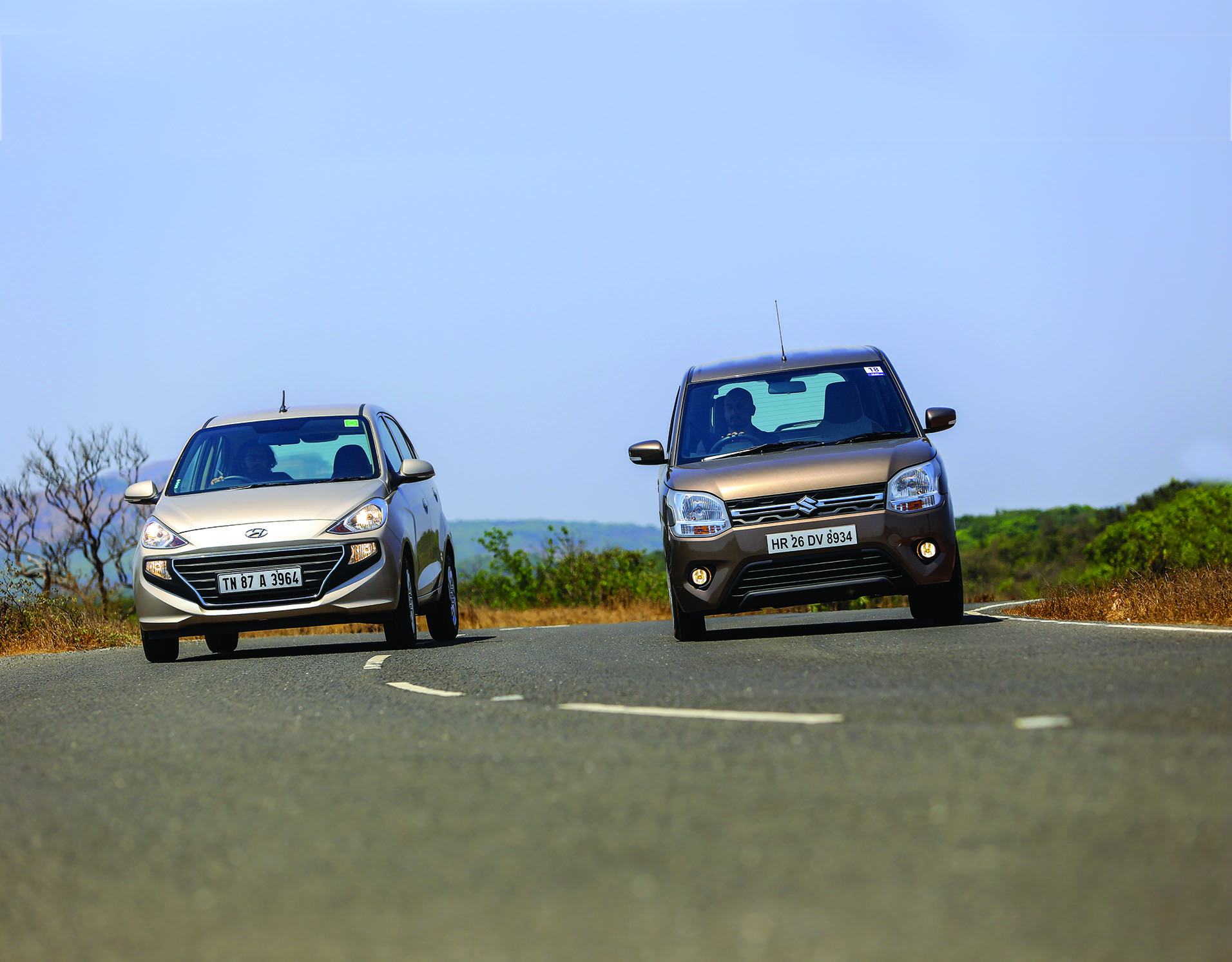 Right off the bat, I must admit that I’m not particularly comfortable doing comparison stories between two vehicles in a segment much like the one the Santro and Wagon R occupy. The reason is simple: most of the things I look for in a car simply don’t apply in this segment. It’s mostly about efficiency and dreary things like how many cupholders one can manage to squeeze into a modest cabin. Nothing wrong with that, might I add; it’s just simply not what I’ve been accustomed to writing all this while. 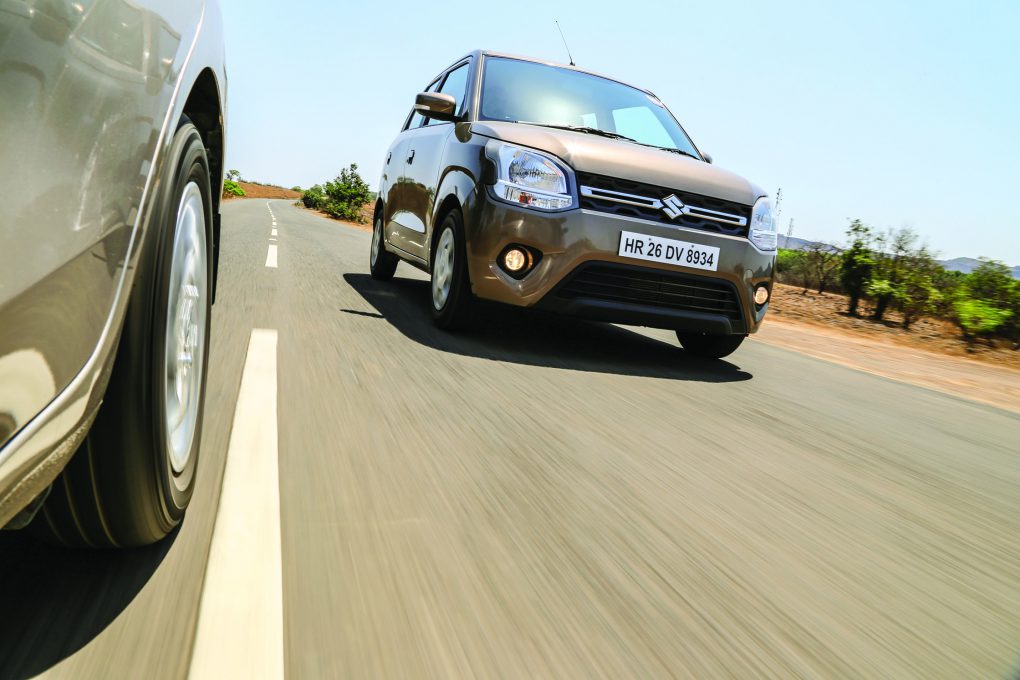 Right, then. With that little disclaimer out of the way, let me introduce you to the new Wagon R and the new Santro. They’re both, um, hatchbacks, and really rather good in, er, traffic-riddled situations, or so I’ve been told. Truth is, I tend to give up the wheel the moment the roads get packed for fear of an overflowing swear jar. Call it a peeve. For the sake of this story, though, I did load up on a number of unnecessary items before setting out to see which one  held them better. The results will not  shock you.

To begin with, I placed my dehumidifier at the back of the Wagon R and drove all the way to South Mumbai and back (it coincided with an errand I had to run. I wouldn’t ever dream of doing the trip otherwise). Upon returning, the dehumidifier was in place and had hardly moved, despite some serious start/stop traffic (am I doing this right so far?). Imaginary gold star awarded to the Wagon R, then. Next, I loaded my Fender on the back seat, my colossal container that’s used to cook rice in astonishingly abnormal quantities (last used sometime in 2001), my rack for utensils, and an assortment of cups and containers to fill every possible cupholder in the car. To make it fun, I filled two of them up with water to see if I could get to my destination and back without spilling anything. This did not work. However, the blame for this goes to the traffic in Bombay more than the Wagon R, which is about as predictable as a squirrel crossing the street. Anyway, the Wagon R happily swallowed up all of these items, and pottered around without a cause for concern. This bodes well for the people who are looking to, um, use it as a goods-carrier, I suppose? Not certain what this test was supposed to prove. Oh, right. Yes. It’s roomy. The Wagon R is plenty roomy, folks. 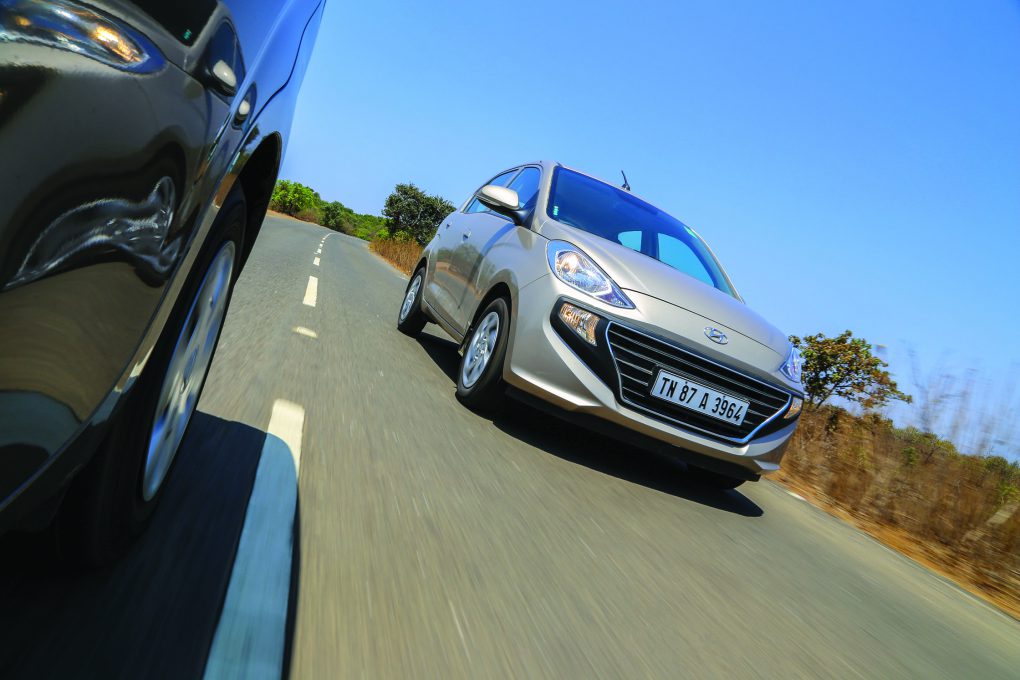 But as roomy as the Santro? Hold your hats, people, because this one is going to be a doozy. It won’t, but there are only a few times you can get away with a statement like that, isn’t there? In hindsight, this probably wasn’t even one of those occasions. Right, so how’d the Santro fare when I crammed in the guitar, the dehumidifier, the utensil rack, the enormous container and the numerous cups? Well, the Santro’s not so handy at carrying stuff, turns out. The humdifier fit fine, but everything else did need a bit of cramming compared to the lairy Wagon R. Also, one thing that I just can not get to terms with in the Santro is the way the driver’s seat is set up. I’m nearly six-feet tall and the lack of adjustment for the seat and the steering makes it impossible for me to get comfortable on a long journey. This, of course, doesn’t make it very comfortable in traffic, but I’m well above average height, so that should play into most people’s hands. 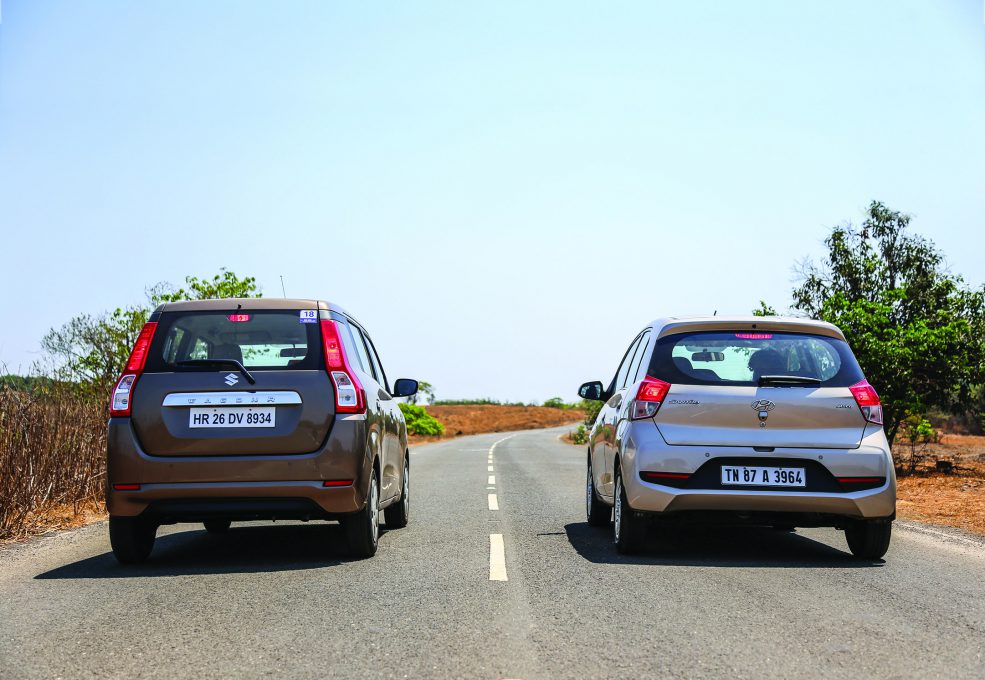 Case in point, if you need your car to be roomy, the Wagon R’s the pick between the two. That takes care of that. Now, on to the pertinent part of the story; the question that no one needs an answer to: which makes for a better car when your ‘zoned out’ friend needs to be picked up from a party that he has no recollection of attending? This was a tough one, honestly. Initially, it seemed like the Wagon R would be the obvious choice seeing as how it’s the roomier of the two and you won’t be jabbing at the brakes randomly because you’re seated comfortably. However, the Santro, when it’s time to adopt the foetal position on the rear bench and take a snooze, was surprisingly more comfortable. Put this down to more cushioning and a smoother ride, I suppose. I can say this with certainty because he didn’t wake up even once on the drive home in the Santro, whereas the Wagon R had him slipping over on to the floor every now and then (eventually he made his peace with it and passed out on the floor itself). This one goes to the Santro, then.

I will conclude on a bit of a subjective note. It’s long been noted that both of these cars are wildly different from their predecessors. I do concur with this note, but at the end of the day, I’ve always felt that Maruti went a little overboard with the design of the Wagon R. Not that it’s bad to look at, but it’s just somehow never sat well with me every time I spot one on the road. The Santro isn’t a looker, either, but it’s far less obstinate in my eyes. Based on the parameters I’ve listed, if you’re in the market for either of these two cars, are of average height, have an unnatural need to transport the most random things and have terribly irresponsible friends, I’d have to go with the Santro. Or the Wagon R. Honestly, it doesn’t make a difference. They’re both equally good at most things that matter, honestly, unlike the premise for this article. There you have it, then. Am I getting better at these comparison stories? Probably not.