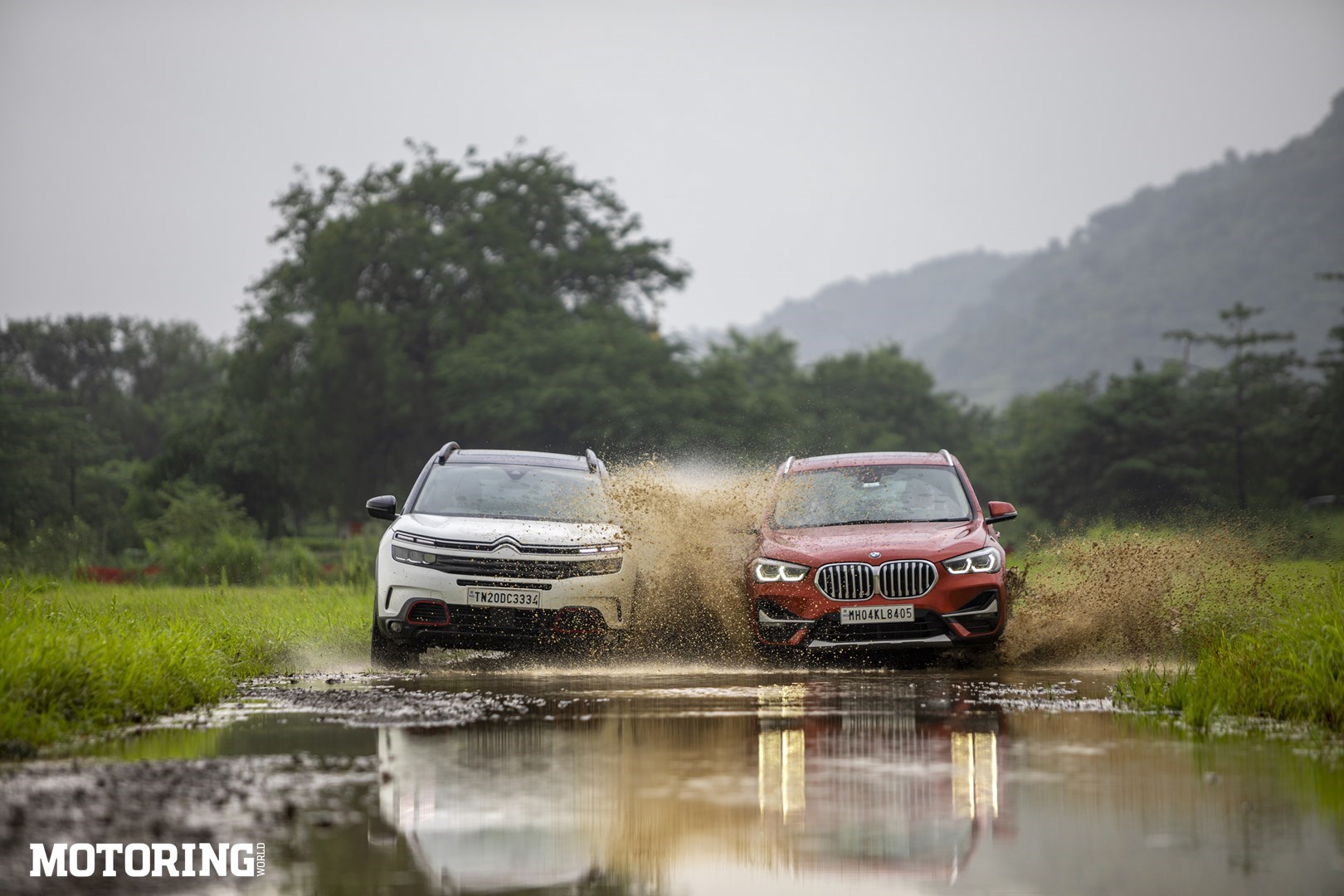 The sun peeks out from behind the grey clouds for an instant as we take our positions, bathing the Citroen C5 Aircross and the BMW X1 in dappled light. Kaizad is standing about 200 metres away, waving at us to get going, and Janak and I shoot forward over the slush-filled path, barely a couple of feet apart. He’s in the C5 Aircross, I’m in the X1 sDrive20d, and this is our second attempt at a gorgeous splash shot. As the French SUV nudges ahead a tiny bit and obscures my view with a cascade of brown, muddy water, I hope Kaizad has got the shot so I can put my wiper on. What I realise as we reposition ourselves to try again is that these SUVs may be soft-roaders, but squishy trails filled with water aren’t much of a challenge for these cars. Sure, it’s not what they’re meant for, but it’s commendable that they can pull it off anyway. 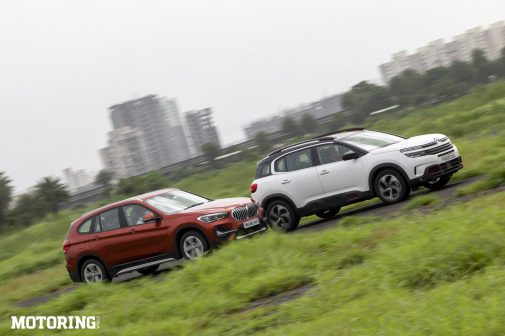 What we’re trying to prove here is that you don’t need to spend luxury-SUV money when you’ve got a more affordable alternative that feels nearly as premium. Citroen has entered the Indian market with something of a halo car. The C5 Aircross (Rs 30.80-32.30 lakh, ex-showroom, India) is the most premium model the French carmaker has in its range and doesn’t have any direct rivals in our market due to its price point, size, and features. In fact, one could argue that the way the Citroen is positioned, it could entice those looking for an entry-level luxury SUV. But does the C5 Aircross actually have what it takes to compete against the likes of the BMW X1 sDrive20d (Rs 43 lakh)?

One look at the Citroen and you know its funky styling is going to grab more eyeballs than the BMW. The C5 Aircross does look better in person than on paper, though I can understand how some would consider it to be overdone. The unconventional horizontal grille sits below the double-chevron logo, which extends all the way to the slim DRLs, and gives the illusion of width. The trapezoidal element seen on the front bumper can also be seen on the sides and on the inside, which is a nice touch.

The X1’s design is so obviously BMW, you wouldn’t confuse it with anything else. Although it’s not a bad-looking SUV by any standard, standing next to the Citroen, the BMW does look a little too sedate and safe, especially in this xLine variant. There used to be an M Sport trim with a more aggressive look, but that’s not on the table right now. There’s also the fact that the X1 is marginally smaller than the C5 Aircross, lending the latter a proper SUV stance, unlike the BMW’s more crossover cues. What also helps the Citroen look beefier is the thick plastic body cladding and the taller profile. So, on the design front, the French SUV definitely has the chops to entice luxury SUV buyers.

Step into the C5 Aircross and the feeling that you’re in something unique remains. Sure, the grey and black colour scheme looks a bit drab and there is a dearth of soft-touch surfaces, especially after coming out of the X1’s cabin, but there is plenty to like here, from the quality of materials to seat comfort. And speaking of the seats, Citroen has given each rear passenger an individually reclining seat segment, something that will be convenient when three are seated at the back. All five seats offer good support and will be comfortable over long drives.

Yes, the X1 does feel plusher, but space isn’t quite as generous on the inside as the C5, which is mostly down to the Citroen being 142 mm wider and 112 mm taller. Another seeming lack is the level of equipment available on this xLine trim; it has more than just the basics, but compare it to the French SUV and there’s definitely a deficiency. Safety features that the X1 misses out on include hill-descent control, front parking sensors, and a blind spot monitoring system. In addition, the X1 doesn’t get features such as Android Auto for its excellent 8.8-inch touchscreen infotainment system, keyless entry, hands-free parking, and an electric boot release. And while I’m not a fan of digital instrument clusters in general, BMW’s superb unit is also missing from the X1, which is a shame. I do have a point of contention with both SUVs here, though; the lack of ventilated seats is a glaring omission at this price point.

While slushy roads are fun in their own right, these models will be driven on our bombed-out roads far more often than not. And it is here, in terms of ride quality, that the Citroen C5 Aircross pulls firmly ahead of the BMW X1. The ‘flying carpet suspension’, as Citroen calls it, delivers the cushiest ride I’ve experienced in a car that doesn’t have adaptive air suspension. Only over the biggest and sharpest of road undulations do you feel the suspension actually working as in most other conditions, it just smothers bad roads. The C5’s higher ground clearance also works in its favour here. 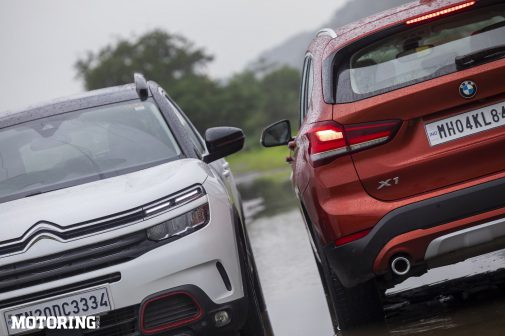 The really surprising bit is that the plush ride doesn’t mean it’ll pitch and yaw like a boat when quick cornering is called for. The X1 is definitely the more dynamic of the two front-wheel drive SUVs, but the fact that the Citroen isn’t too far behind is admirable. It grips well enough, body roll is well-contained for something of this size, and the steering weighs up competently, too. However, the X1 is typically BMW in the way that it drives — there’s a verve here that’s found nowhere else. It may be a crossover, but the X1 is pretty well-balanced when driven quickly around a set of twisties. 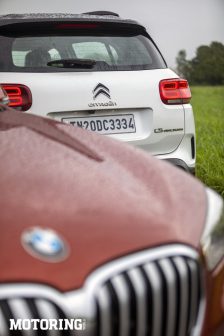 What really adds to the X1’s dynamism is the strong 2.0-litre 187-bhp diesel engine and the quick-shifting 8-speed automatic gearbox. The X1’s engine has just 12 bhp over the C5 Aircross’s 2.0-litre diesel unit, but in the real world, the BMW is far quicker, both from a standstill and in-gear. The Citroen’s diesel engine is meant for more sedate driving and works in tandem with the 8-speed auto gearbox to deliver what can only be described as a calm driving experience. Wring the four-cylinder motor and it doesn’t sound as pleasing as the BMW’s, either, which is why it’s best left to its own devices. 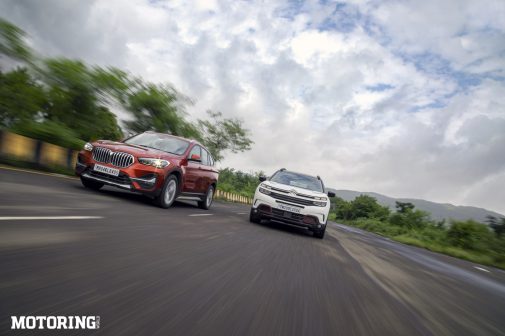 In conclusion, there is certainly a section of the market that could look at the C5 Aircross as something that gives you nearly everything they could want from an entry-level luxury SUV, and at a price tag that is nearly Rs 10 lakh lower. You’ll have a unique-looking SUV that’s comfy and decently specced, without much compromise, making it a value buy. Now, isn’t that what we want from our cars?