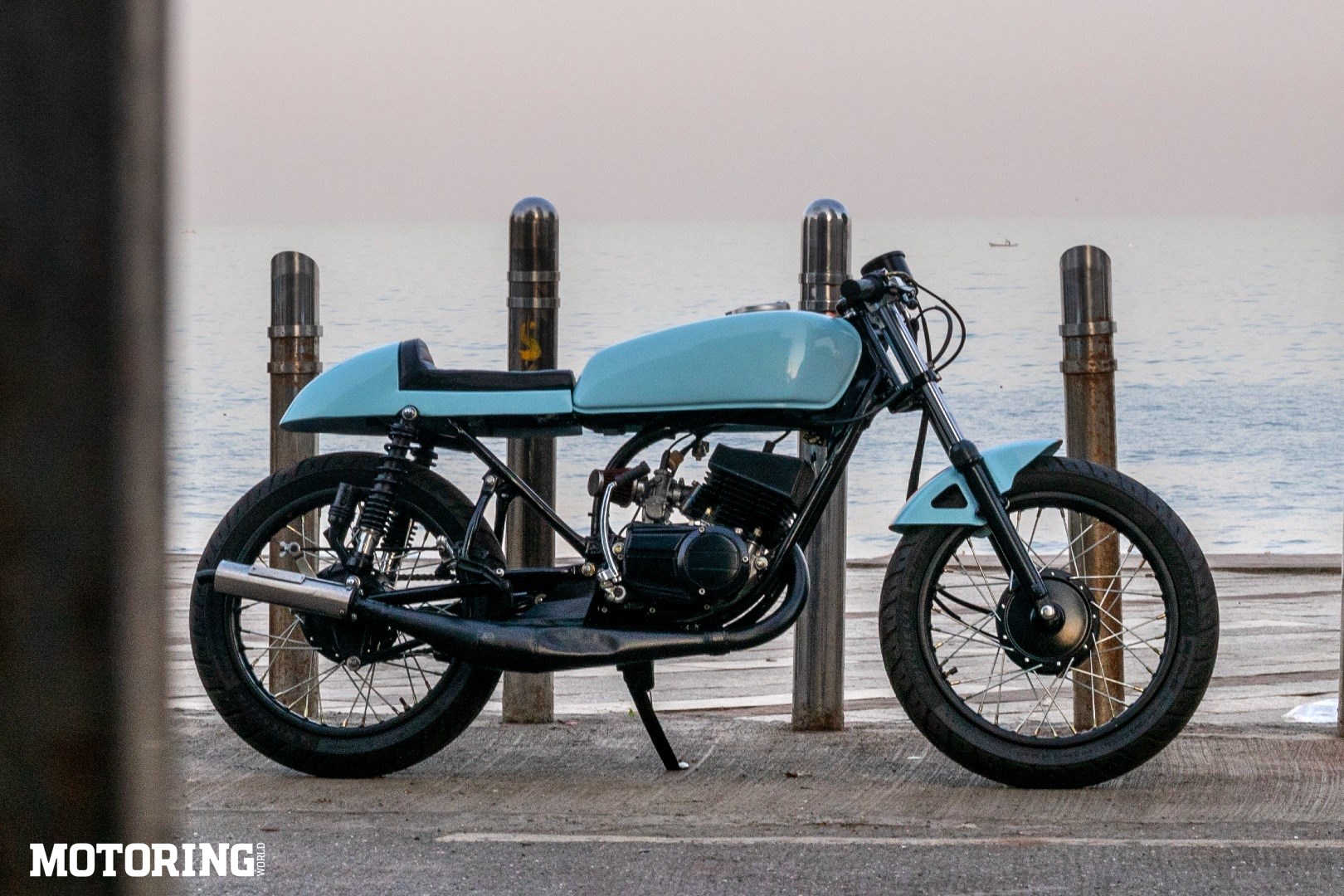 Okay, I think I need a break before I end up with a nasty cramp. I’m about 5’7” and I like my bikes a bit more upright, not those that put me in a constricted yogic stance, crouched down and knees bent tight. I also like a small windscreen or a deflector so that I don’t have to live with the constant fear of a bird or a big bug hitting me straight in the face. It’s weird, I know, but it’s a thought I find difficult to get rid of. Given these preferences, it isn’t surprising that after riding Ronny Sequeira’s modified Yamaha RX 100 café racer for about 10 minutes, my back wants to call it a day, while my growing tyre belly is in a state exactly the opposite of comfort. And if I did choose to ride for another five minutes, I probably won’t be able to take my feet off the severely rearset ’pegs.

You see, the bike I am riding here isn’t sized for Ronny — at least that’s what I want to believe after riding it. It’s for his young son, Aiden, who has now outgrown his Kawasaki KLX 110, and while he is yet to reach legal age, his dad sure doesn’t want to keep him away from riding motorcycles. The RX 100 itself is a stripped-down version of a motorcycle that is already popular for its lightweight nature. Staying true to the café racer theme, all unwanted weight has been junked, keeping only the essentials needed for the bike to run. 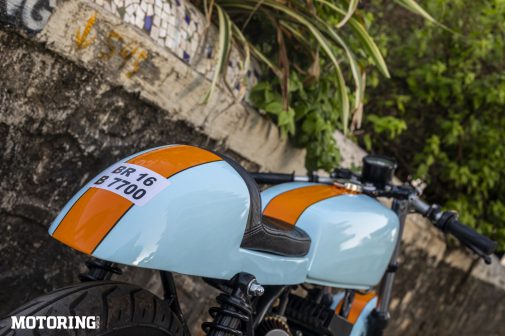 And by run, I mean that typical two-stroke run — quick, and nirvana every time you enter the powerband. At low rpm roughly under the 3500-rpm mark, sounding erratic and untuned, the RX 100 is clearly unhappy because, like all two-strokes, all it wants to do is hit that powerband. And even at the low speeds, the soundtrack from the Proton expansion chamber was annoying morning joggers as I passed them. Shortly, I found myself on an empty road, well surfaced, and no humans or traffic in sight besides security guards who seemed to have been woken up by the exhaust note.

I crouched down closer to the fuel tank painted in the iconic Gulf colours, grasped the clip-ons, left foot on the footpeg, and the right one on the ground. With the gearbox in first and revs built up, I let the clutch go and the bike darted off with much urgency. The Proton chamber was quite literally screaming down the road as I zoomed ahead, leaving behind a trail of blue smoke for everyone to soak in. Either the empty stretch wasn’t long enough or the bike ran it in no time. 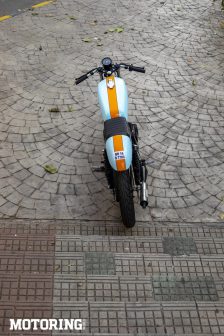 While I am confident it’s the latter, this RX has a one-track mind. All it knows is to go hell for leather in the shortest time — forget about everything else. I had accounted for braking distance for the run, but the tiny drum brakes on this café racer did their job well and brought me to a stop without any scary moments. Smitten by the rush of adrenaline, I couldn’t help but do one more run down the same stretch. Euphoria. I didn’t do a third run because that’d only be asking local residents to call the cops on me. Luckily, the people of Bandra needn’t worry since this bike is to be mainly ridden on a closed circuit where Aiden can develop his riding skills in a safe environment. 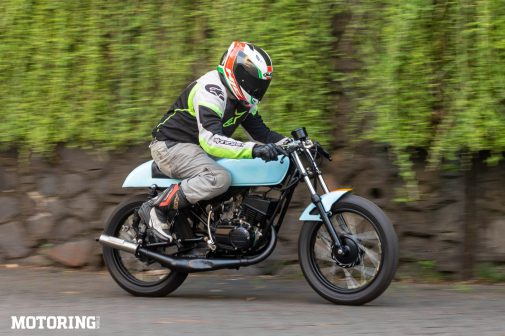 While this RX 100 has lived the life of a café racer (built by ex-Motoring man Joshua Crasto’s jcMoto) for a good number of years after being a stock bike, it was only recently that it underwent a rebuild and a paint job with YC Design’s Yogi Chhabria, also a friend of Motoring. Also, this RX has been Ronny’s pride and joy forever — it’s his first bike from when he’d turned 18, and this is only the latest chapter in a 32-year-old story! From observing the father-and-son duo, I can see that this young lad is going to have a blast growing up riding the RX. And it is yet one more example of how motorcycles can strengthen the bonds between people.

This RX, then, is one hell of a machine. It might not be the most comfortable, is impractical for anything else besides blasting around a circuit, and loud enough to be disliked by many. But beyond being just a motorcycle, this RX is a valuable asset to the Sequeiras, a solid medium for the memories far in the past and the ones that are yet to come. And I love it for that.

We’d like to thank Ronny Sequeira for spending time with us with his lovely RX 100. And we look forward to Aiden pulling wheelies on the thing as soon as possible!