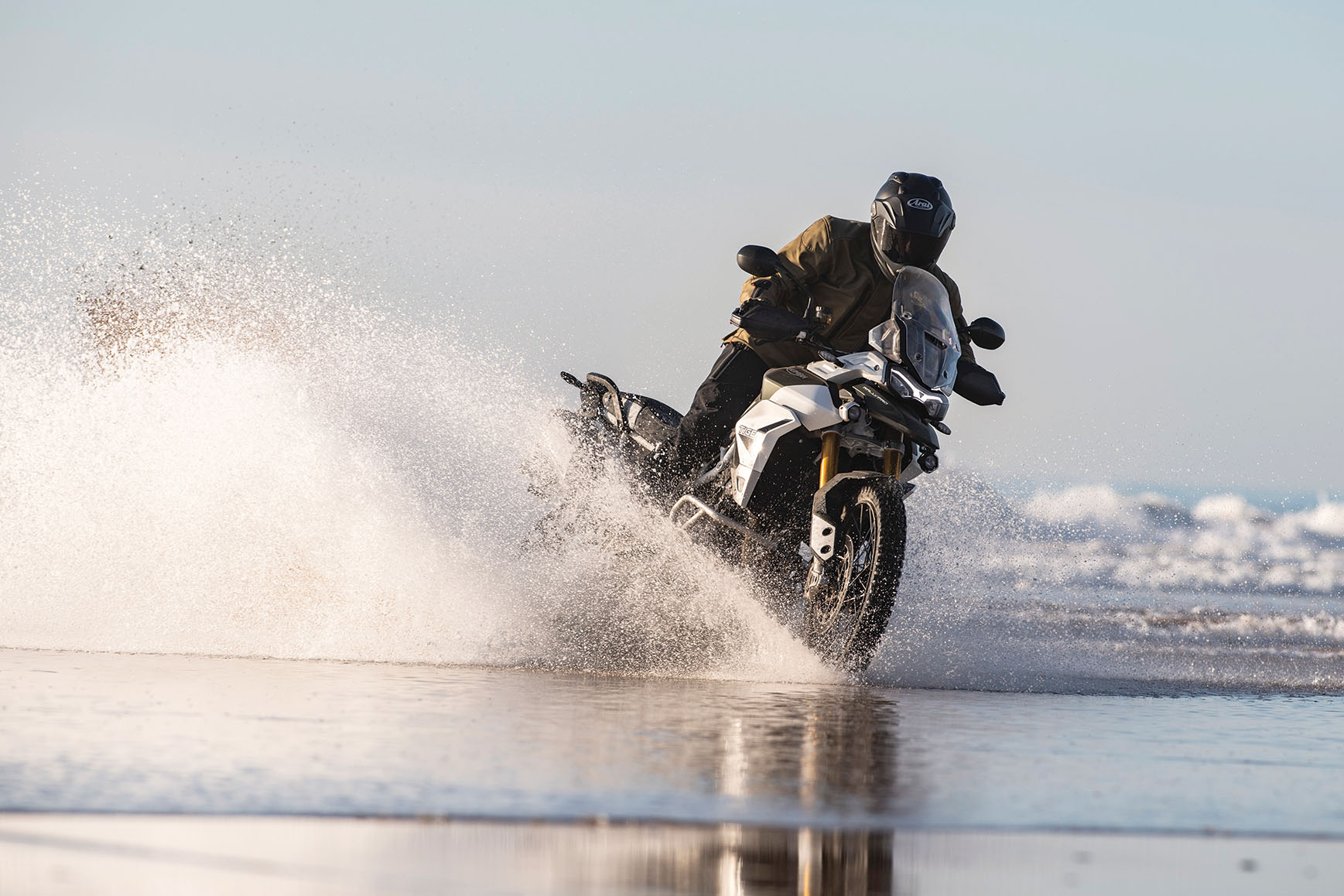 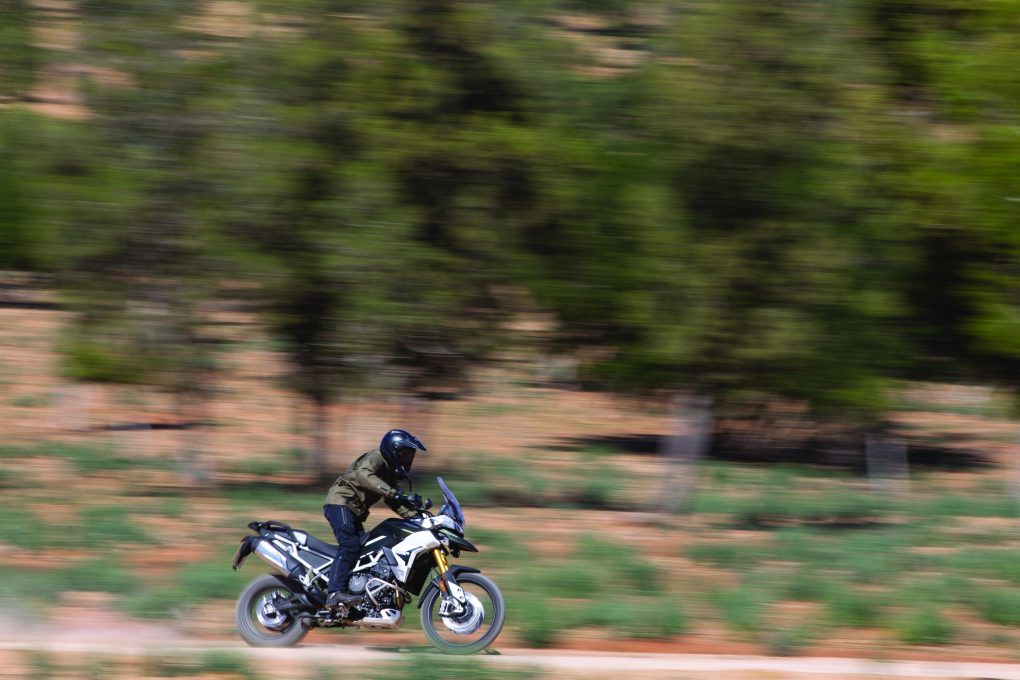 It’s about 0830 and we have just turned away from the smooth tarmac highway onto a small dirt trail that winds its way to the beach in Essaouira, a small port town situated to the west of Marrakech. This is my first time on the new Triumph Tiger 900 Rally Pro. And as usual, like most of these beasts that scare me with their height and bulk, the first impression of the new Tiger had been similarly intimidating. But that only lasted for the first few miles on the highway. As soon as we touched dirt, a small adjustment for lowering the seat height to suit my 5’6” frame and it became a lot more manageable than I had imagined. Following our lead rider, Matthew Reed, who runs his own Triumph Adventure Riding Academy in Wales, UK, I soon found adjusting to the reworked ergonomics of the Tiger easier than any other big adventure machines I’ve ridden before. And it felt a lot more welcoming and forgiving off-road than the Tiger 800 XCX, of which I’ve had a fair share trying to go off-roading over the last couple of years. 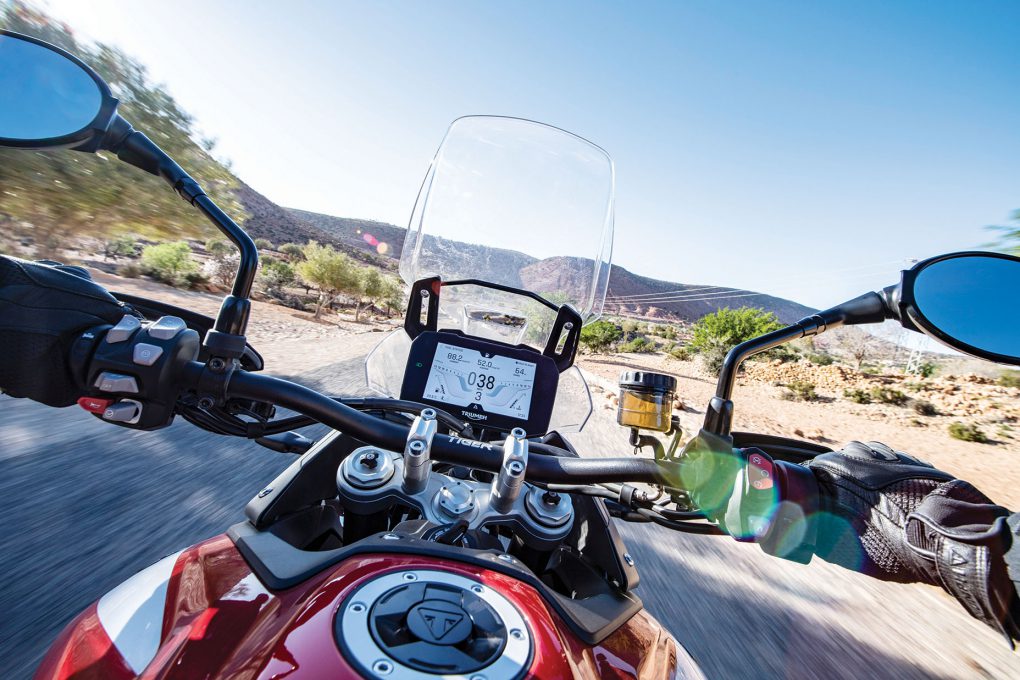 It was a whole day of off-road riding that Triumph had marked out for us and right from the very first trail on the route, the new Tiger felt absolutely at home on the loose stuff. The revised weight balance on the bike is spot on for enduro riding and one can sit on the saddle (or stand!) all day riding the dirt without feeling the weight or size of the motorcycle, something that the outgoing 800 failed to do. The old bike, although a potent machine for trails, it sure tired out the rider at the end of the course. The new Tiger, instead, just keeps edging you to push it harder and further, almost teasing playfully, ‘Is that all you got?’ It is very evident that the new Tiger has a much more ravenous appetite to relish every off-road course. 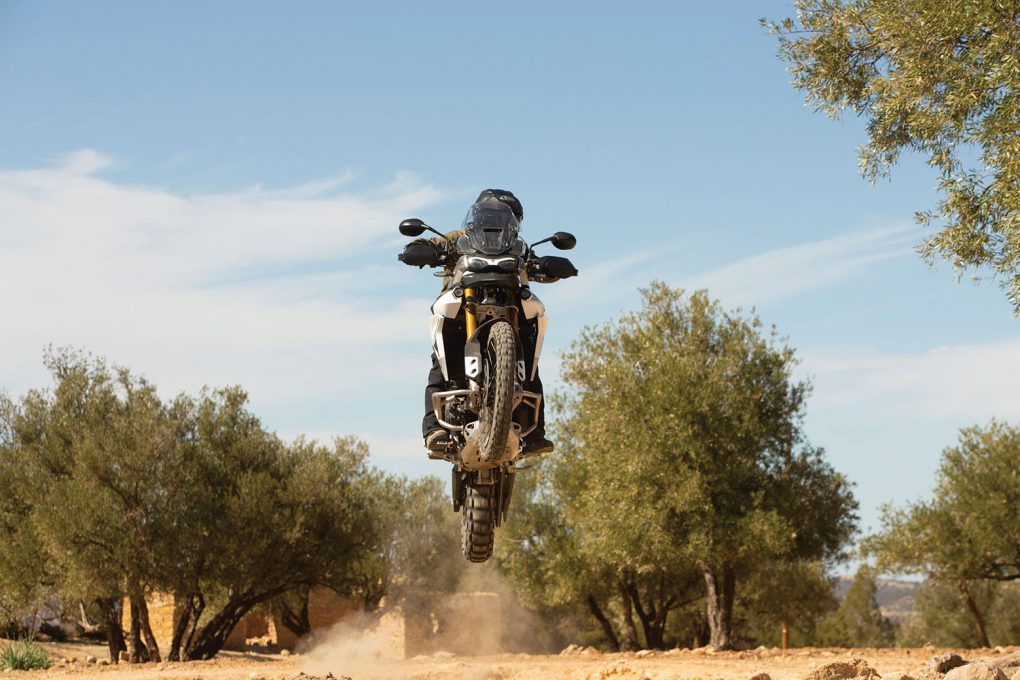 The seat is slimmer, making way for easier access to the ground even for short riders. The tank, although now bigger with 20 litres of capacity, has been slimmed down to match the seat’s narrow design, yet making for a perfect curve for the thighs to confidently hug the tank when standing and riding. The footpegs on the Rally Pro have also been moved a bit backwards than the layout of the road-friendly 900 GT version. But it’s not just ergonomics here that are responsible for the Tiger 900 more approachable nature. It’s the overall rediscovery of design, suspension and engine that Triumph has achieved here.

The earlier WP suspension has been replaced by a fully-adjustable long-travel (240 mm) Showa unit up front and it’s been tuned particularly for off-road use. On the rear is a Showa monoshock adjustable for preload and rebound damping. Overall, the suspension tuning is such that riding the Tiger off-road now feels like second nature. The feel from the front end is superlatively communicative and the rider can feel every small detail on the road and revert with accurate inputs. And a large part of this dialogue-inducing riding character can be attributed to the new lightweight frame and the revised engine layout.

The centre of gravity has been dropped by moving the new triple motor down by 42 mm and tilting it ahead by 6.8 degrees. Also, changes to engine sump and an all-new split twin-radiator design has allowed Triumph to achieve a more balanced weight distribution without compromising on ground clearance. All this geometrical wizardry transforms the new Tiger into a lot more capable off-roader than ever before. The bike feels planted and composed even when ridden through thick beach sand, slushy water crossings, or on fine gravel trails. On the older Tiger, the front end felt too heavy and busy especially when riding on dirt. And the earlier  triple engine also felt less grunty at its bottom end. But that’s an  old story now.

The new Tiger also gets an all-new 900cc triple-cylinder motor that has been designed to keep the riders happy with a more suitable low-end power delivery. Unlike the Tiger 800, the new triple gets an uneven 1-3-2 firing order which has allowed Triumph to achieve a more tractable power curve in the mid-range without compromising top-end performance. The new engine now makes 0.81 kgm more torque than the previous motor and it delivers that torque lower down the rev range for a better riding experience. The gearing is such that the power is a lot more useable at lower rpm, but the top two gears are taller and benefit with about 6-7 per cent better performance for comfortable highway cruising. But, like all good motorcycles, the Tiger 900 is a lot more about feel than numbers.

Through the full day of riding the machine on various terrains, at no point did it feel like excess hard work, which is what the Tiger 800 always felt like at the end of the day. And that, I think, is a huge upgrade for the Tiger. It feels a lot lighter to ride (it is lighter by about 5 kg) and is more spacious to move around on. The power delivery is a lot more useable for serious off-road riding and the overall equipment on the bike is top notch, including the advanced electronics like different riding modes, cornering ABS, traction control, and all other bells and whistles. 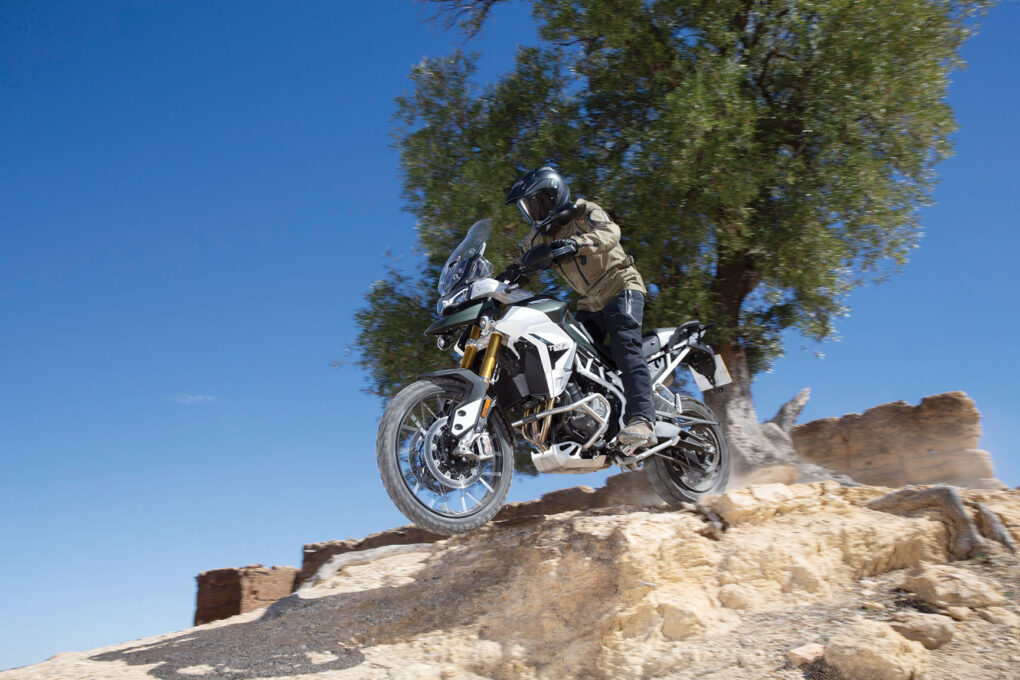 In Off-Road Pro mode, it hands complete control to the rider, allowing you to entirely turn off ABS and traction control if the situation calls for all hell breaking loose. For more sensible riders, there is the Off-Road mode that has limited intrusion from the electronics, yet allowing for some controlled shenanigans. It also gets an anti-stall mechanism that increases idling revs to make for a stall-free riding experience off-road at low revs, a particular chink in the Tiger 800’s armour. 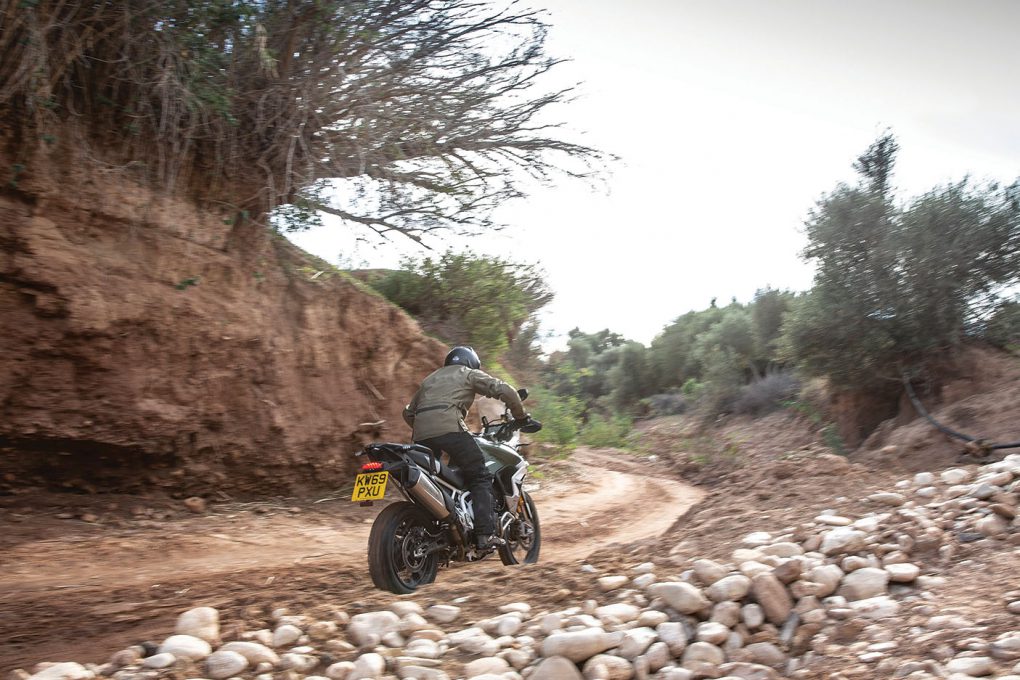 Of course, we had the pleasure of running the tubeless Pirelli Scorpion Trail tyres on our test bike, and we are pretty certain those tyres are not what we will get here in India. But I must say that the Tiger 900 Rally Pro deserves the Pirelli rubber if you plan to go off-roading with it. Dual-sport tyres are fine for mixed riding conditions, but knobbies are what truly transform the Tiger 900 into a dirt beast. When the bike arrives in India, we will have to see what the BSVI norms change in its character and riding feel. But purely on chassis feel and weight balance coupled with welcoming ergonomics even for short riders like yours truly, the new Tiger 900 Rally Pro is a dirt bike on crack… but a really well-behaved one. Is there even a thing like that? No? Maybe that’s why the new Tiger is such a big deal. 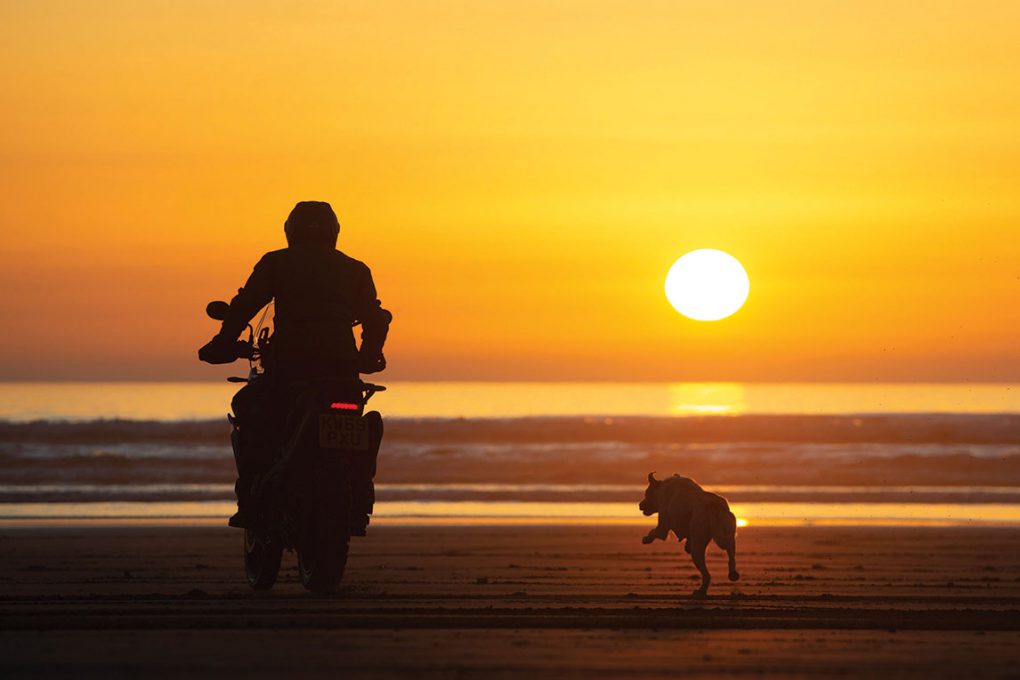