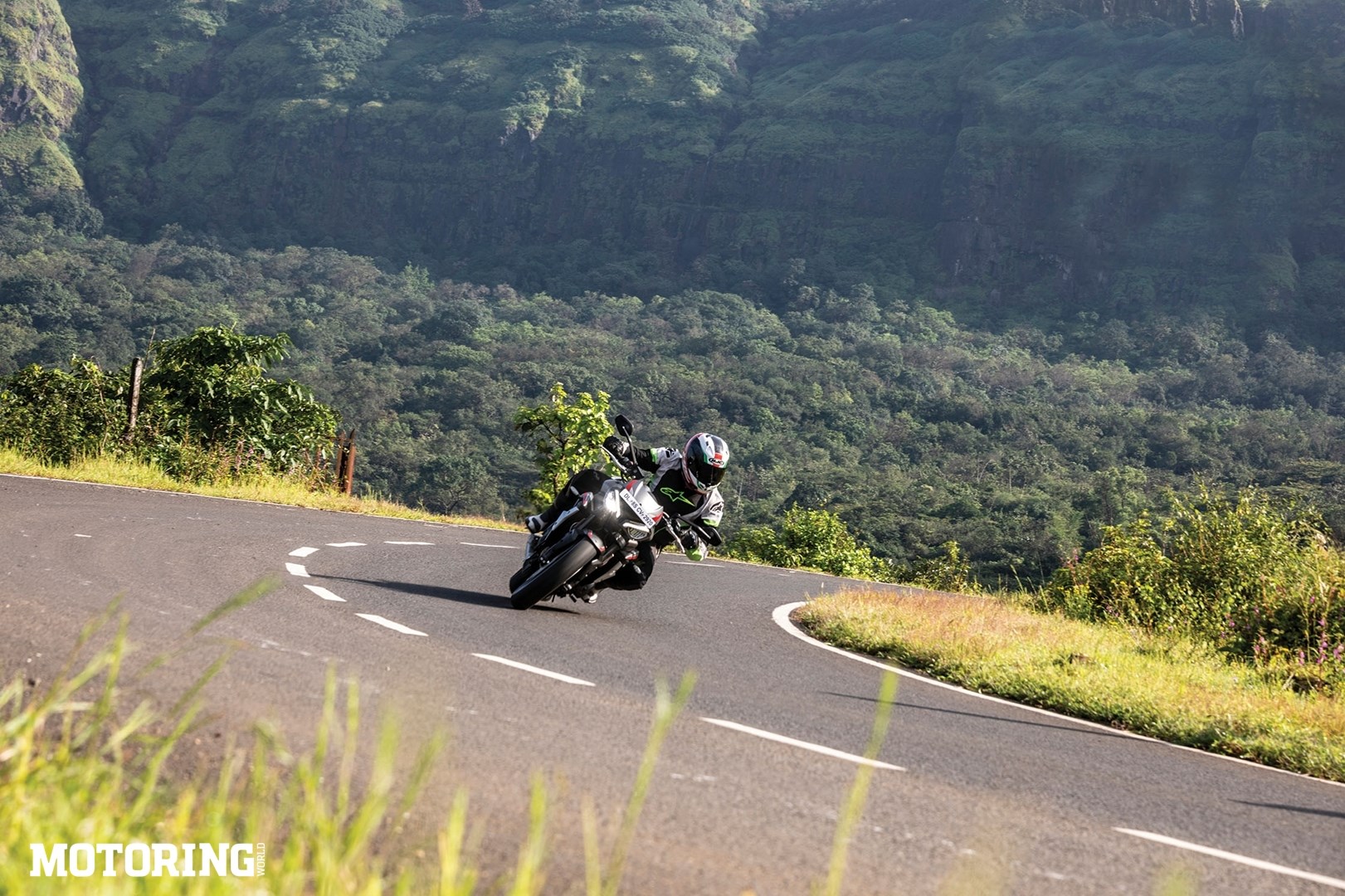 First gear slotted, I slipped the clutch till we got rolling. After a quick check of the surroundings, a proper twist of the throttle sent the front wheel skimming endlessly over the tarmac. By the time I shifted to third, the speed limit was left far behind. And before I knew it, it was time to haul on the brakes to bring things back to sanity. Was I scared? Well, enough to leave my limbs trembling. Would I do it again? Absolutely. This is what the Triumph Street Triple has always been about. And the new Street Triple R is a lot more civilised as compared to the earlier 675s that offered nothing but power without any rider aids, too. 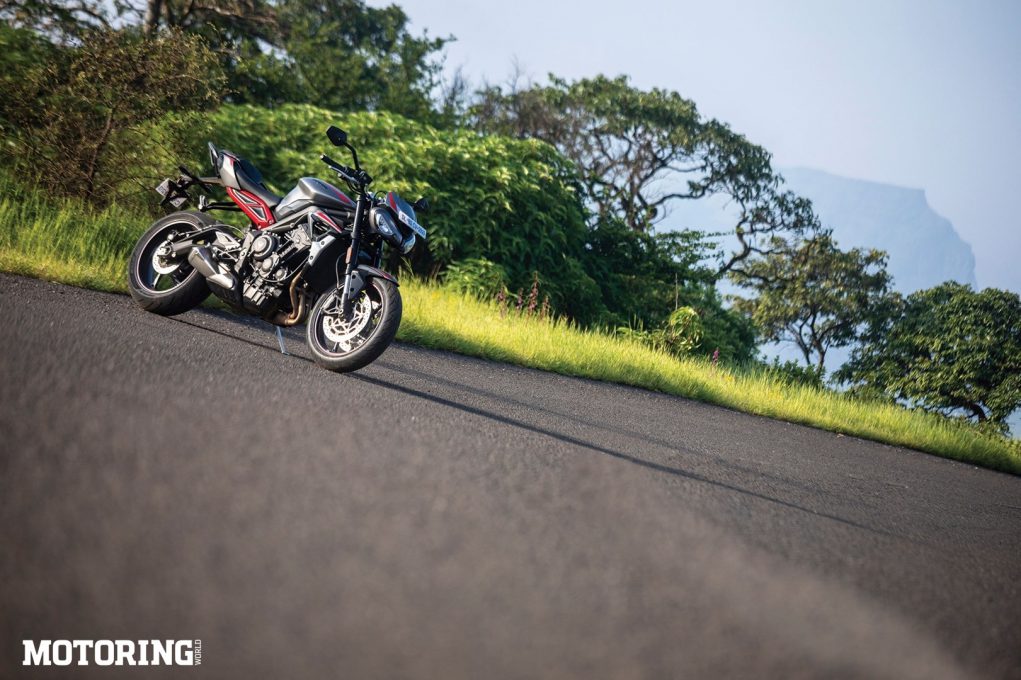 While I had gained control of the speed, my fellow road users seemed to adhere to some kind of formation which left no choice but to match my pace till a clear path was found past them. In this mode, in fourth gear, the Street Triple R calmly cruised along at 40-50 kph which is quite surprising for a 765cc middleweight motorcycle. Then again, that’s the thing about streetfighters; they scare the life out of you and then filter through traffic as if nothing happened.

Now, before I get to the fun part of this motorcycle, let’s quickly explore what changes Triumph’s made on the cosmetic front. Previous iterations of the Street Triple always had faces reminiscent of a praying mantis. While some might not be fans of the new design, I feel it looks all the more mean now thanks to the edgier LED headlamp shape accompanied by the bright LED DRL eyebrows. The overall look and feel are very similar to the RS, including the paint scheme and decals. However, the differentiating bits are the conventional rearview mirrors instead of the bar-end ones on the RS and the red-coloured subframe which actually looks nice. And the red pinstripes on the five-spoke wheels are done by hand, no less, according to Triumph. There’s a forced ‘bespoke’ joke somewhere in there.

The Street Triple R, positioned below the top-spec RS, replaces the entry-level S that was previously sold in India. Lower-spec, it may be, but the R is much closer to the RS in most aspects; you have 114.7 bhp which is just 6.6 bhp short of the RS, and max torque is identical at 8.05 kgm. Other than that, you have a fully-adjustable Showa suspension setup, radially-mounted Brembo calipers up front, a two-way quickshifter, three riding modes (RS gets five), adjustable levers, and Pirelli Diablo Corsa III rubber. Now, this setup is a level below that’s offered on the RS, but does it make a massive difference? Not really, unless you are arguing on a racetrack, of course.

For me, the engaging character of the Street Triple R is largely from the inline-triple held by the aluminium twin-spar chassis. Things are all under control up to 6000 rpm, beyond which all hell breaks loose; while the first two gears have shorter ratios for rapid acceleration, the other four combined with the 12,000-rpm redline are complete bliss. That’s because once you’ve crossed the halfway mark, you don’t have the time to look down at the meters. Your signs on nearing the redline are the strong punchy note of the exhaust and the blue shift light that appears in your peripheral vision. The motor’s high-rpm behaviour is highly rewarding and addictive, constantly nudging you to open the throttle a little more the next time.

Moving to the other bits, being a test bike that was equipped with adjustable suspension at both ends, the setup was as stiff as a rock. But regardless of that, given some time around twisties, the Street Triple R didn’t fail to impress — the R is a riot once you get the hang of it. Find an open patch of smooth tarmac, toss in a couple of twisties, and you are in for a treat. To be honest, at a point I was wishing that I had sliders on my riding pants since the feedback from the contact patches inspired enough confidence to push more.

And that confidence is further cemented by the bite and progression from the brakes. You are constantly alerted about the level of bite available before the minor chance of locking up. And if that happens, the sophisticated ABS system is prompt at keeping things in control. But that is seldom the case because the Pirelli Corsa III tyres are not that easy to break traction with. All of this, along with a well-balanced chassis offering the ideal weight distribution translates into a fantastic riding experience. 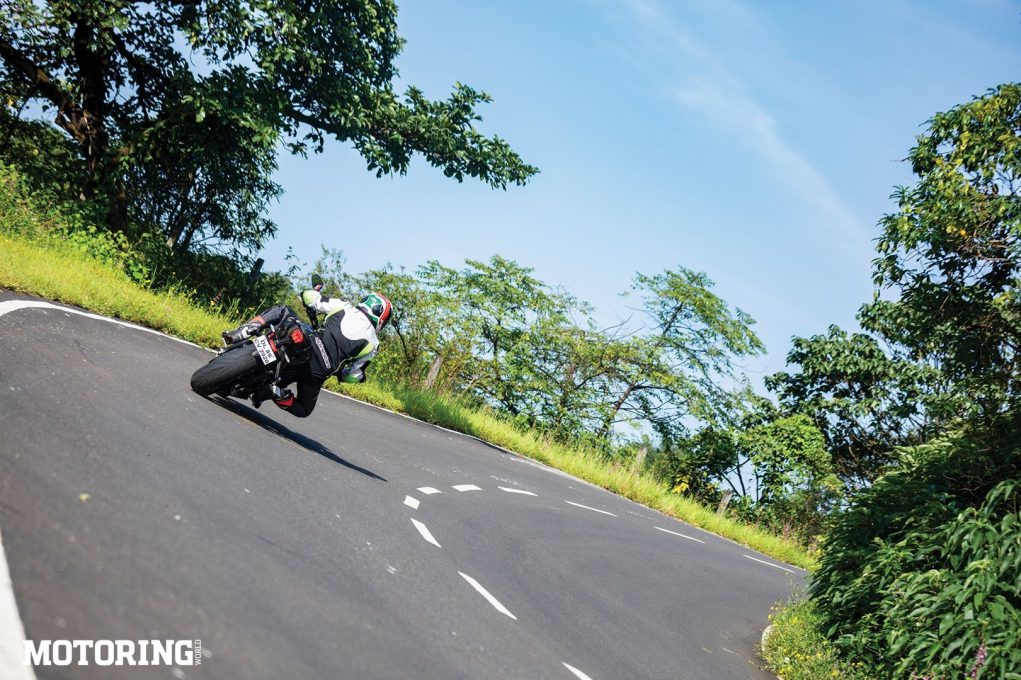 Triumph is a premium brand offering motorcycles that are solidly built while also seeking a proportionally bigger price tag. Notably, that actually isn’t the case here; for all that you get from the Street Triple R, Triumph asks for Rs 8.84 lakh (ex-Delhi) which, surprisingly, is cheaper than the discontinued S (!) and Rs 2.5 lakh cheaper than the range-topping RS. Having ridden the top-spec RS as well as the standard S earlier, the R is a lot closer to the former, and in my opinion, is a fantastic motorcycle. Now, can it challenge its rivals? Tune in next time!