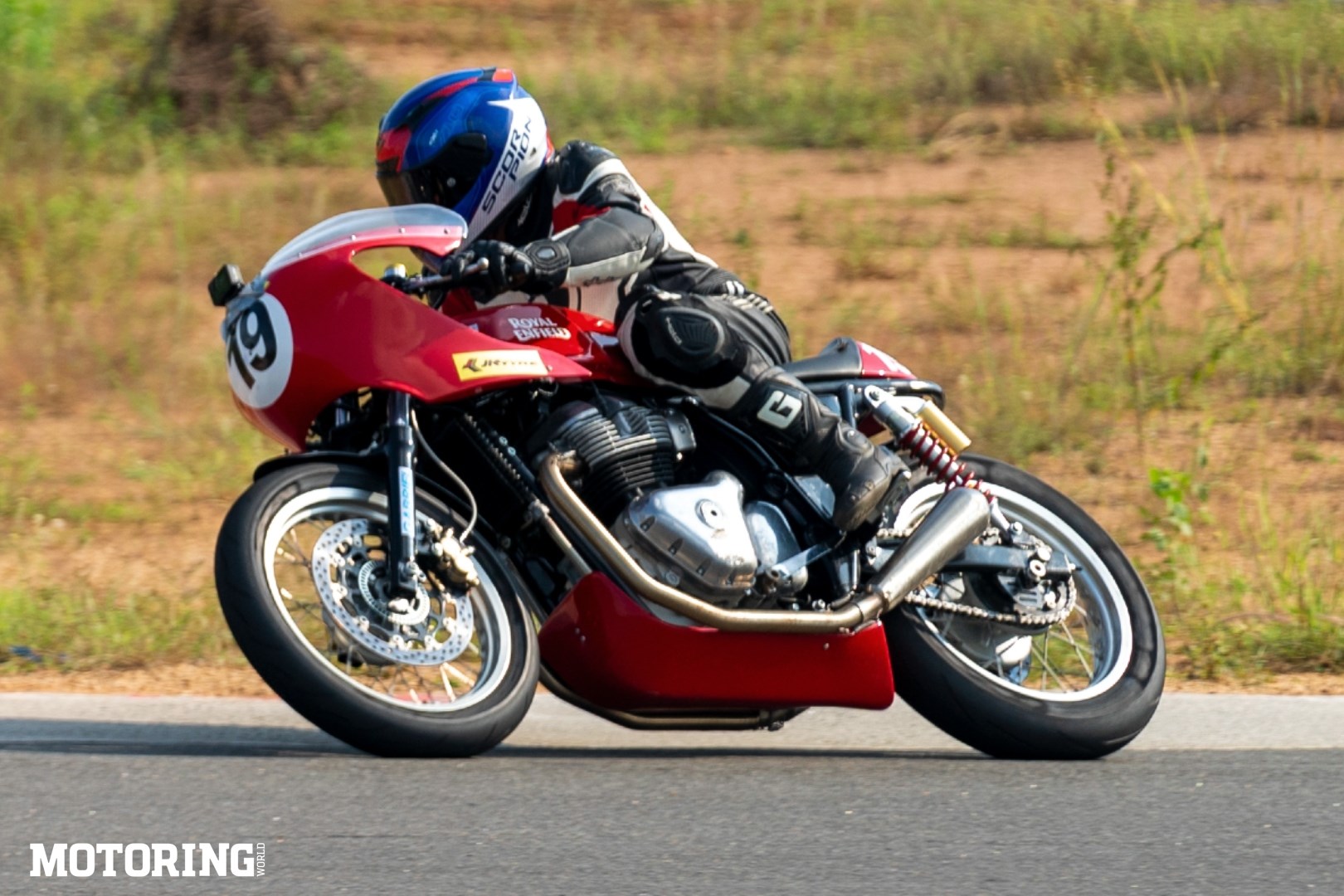 Say hello to the Royal Enfield Continental GT Cup! Tracing its lineage from the near-suicidal café racing of many decades ago to committed road racing on racetracks, the GT Cup brings racing within the reach of RE enthusiasts who wish to test themselves in a competitive environment. And after I spent the whole week in the paddock of the Kari Motor Speedway near Coimbatore, I discovered that the GT Cup is a well-endowed racing experience targeted at first timers.

A one-make racing series is the easiest way to get into road racing in India. And with RE coming forth with one of its own puts road racing back into the limelight in a big way. Reaching out to the masses, who’ve largely only been taking their motorcycles touring, it’s a 360-degree community building project for Royal Enfield. In 2020, the brand resumed its dirt-tracking portfolio after almost five decades with the Interceptor 650 taking top honours in its class in the American Flat Track series in the hands of Johnny Lewis. Soon after, the Slide School flat track experience was initiated in India.

The GT Cup series, too, is focused on allowing younger riders to take up the sport without the burden of emptying their wallets or figuring out parts and race technicians. And that is a major roadblock out of the way for budding road-racers who can simply focus on improving their race craft. And that objective was splendidly achieved since in just a few weeks over 400 legitimate registrations were confirmed, out of which 100 riders were shortlisted on a first-come-first-served basis, with ten backup riders on standby. The 100 semi-finalists then arrived at Kari Speedway for the final selections. The riders put in their hot laps and the top 18 were selected as finalists on the grid. The top 18 hailed from as far as Jammu & Kashmir and also had a female rider, Lana Zena Fernandez from Puducherry. And to make it a 20-rider grid were two wildcard entries from the Indian automotive media.

Almost 50 Continental GT 650 motorcycles have been assigned for the four rounds of the GT Cup. And the assigned bikes stay dedicated to the 18 riders throughout the championship. The racers are allowed to tinker with the Gabriel-made adjustable front and rear suspension to suit their physique and riding style on different circuits. In its current tune, the suspension has been stiffened at both ends, but the preload can be adjusted as per rider requirements. 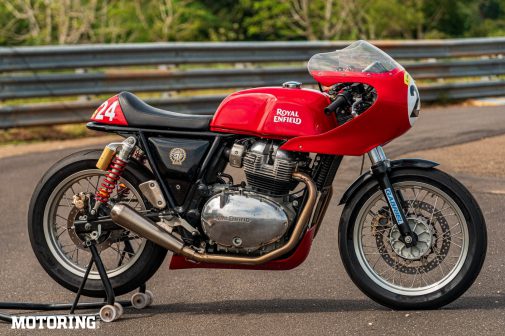 The ergonomics, too, are customisable with adjustable rearset footpegs and clip-on handlebars. The GT Cup race bike sheds about 24 kg over the stock bike, helping it turn quicker and accelerate faster. The stock exhaust unit has been swapped with a lighter and race-tuned unit that gives a 12 per cent bump in power. Especially for the Kari Motor Speedway’s tight corner sections, the front sprocket drops a tooth from stock 15 to 14 teeth, and the rest of the technical bits are the same for all bikes and non-tinkerable to keep the racing fair. Perfect, then. As in all one-make championships, the level playing field makes for super exciting and close racing.

Between the Lights and the Flag!
And close racing is exactly what ensued at the opening round of the GT Cup. Seasoned road racer and multiple-time champion Anish Shetty stole a fantastic double on his GT Cup debut. Although his first outing had Allwin Xavier, Anfal Akdhar and Jayanth Prathipati close on his tail throughout the race, the finish was a nail-biting one with Shetty bagging top honours, and Xavier and Prathipati completing the podium. The second race, though, was a different story as Anish figured more time in the saddle and improved his feel on the bike, running a softer suspension setting to accommodate the bumpy sections on the Kari Motor Speedway. 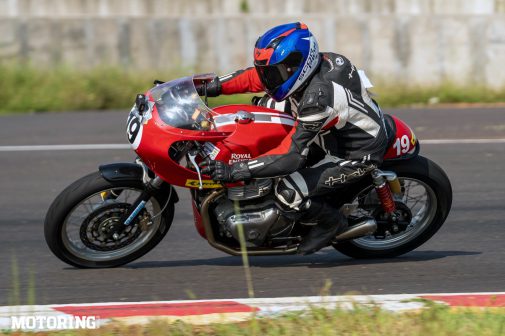 The second race saw Akdhar (the youngest amongst the racers) ride despite an injury chasing down Xavier. Shetty, on the other hand, started from pole and led the race till the flag dropped. The Hubli boy pulled a 9-second lead by the end of the ten laps and comfortably secured the maiden double wins of the Royal Enfield GT Cup with Xavier and Akdhar in second and third places respectively. 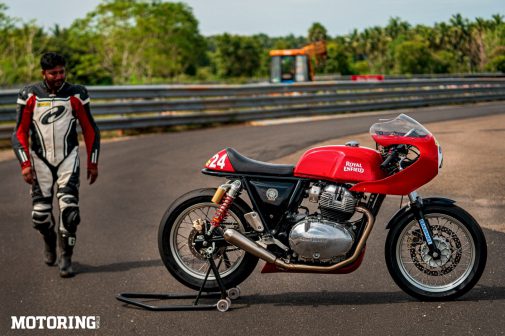 Racing the Royal Enfield GT-R650
My racing return to the Kari Motor Speedway happened after a long hiatus of over eight years. And how I missed it.The moment the GT Cup news came in, I decided to sign up as a privateer, and one look at the bike in the flesh confirmed that the Royal Enfield motto of ‘Retro racing is back!’ was in sync with the entire look and feel of the GT-R650. The old-school full fairing making a comeback followed by steep clip-on ’bars pushed down the front suspension and matched by equally pulled back rearsets meant that getting on the bike for my short frame was effortless. It felt like home. 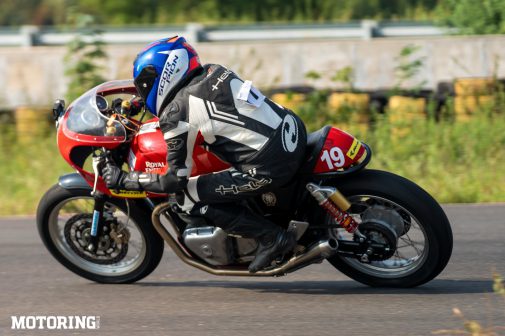 I hadn’t run the new layout of the Kari circuit, so getting used to the new bike and the new track took its toll, and even though I shed about 10 seconds over the week’s riding sessions, I was still about six seconds slower than the fast bunch that kept shedding a second on every outing! Sigh. But that kind of growth over not more than 15 laps in total says how welcoming the GT-R650 race bike is to ride hard and improve upon one’s racing skill set. I chose to run a softer setting and it helped in finding a more composed form on the bike, especially around the bumpy and hard-braking sections of the circuit.

Tucking back to the edge of the racing seat enveloped inside the large windscreen made it easy to hit the rev limiter in fifth gear on the main straight. There is no speedometer on the bike (weight reduction goals!), so max velocity could not be noted, but the word was the bikes easily clocked 150 kph on the straight before the braking markers played messengers of god. The brakes worked fine but displayed a bit of fade towards the end of the weekend and maybe sintered pads would be a good upgrade for the upcoming rounds. The modern-day spec racing rubber held its own and made it a lot less work to push the GT-R650 with urgency out of the tight corners of Kari Speedway despite the sizeable weight for a race bike. 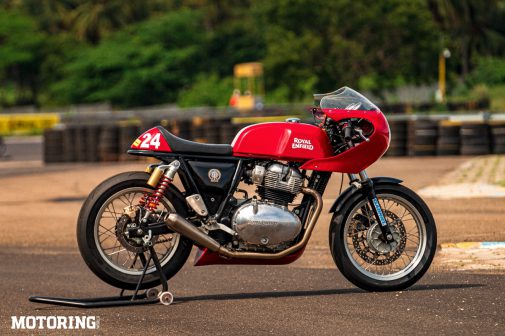 But then a race bike is a constant development project and it keeps getting faster and nimbler with more work. Royal Enfield’s efforts to turn a regular GT 650 into the GT-R650 race bike with minimal modifications is right on the money. With very basic changes and modifications, the regular production machine can easily be turned into a legit racing motorcycle that eventually privateers can enter the GT Cup with. Additionally, the company plans to start riding schools across India to help riders grow and learn the art of racing. While I’m all for going back to school, until it starts I am hounding RE for a wildcard entry for the upcoming round of the GT Cup. See you on the grid!