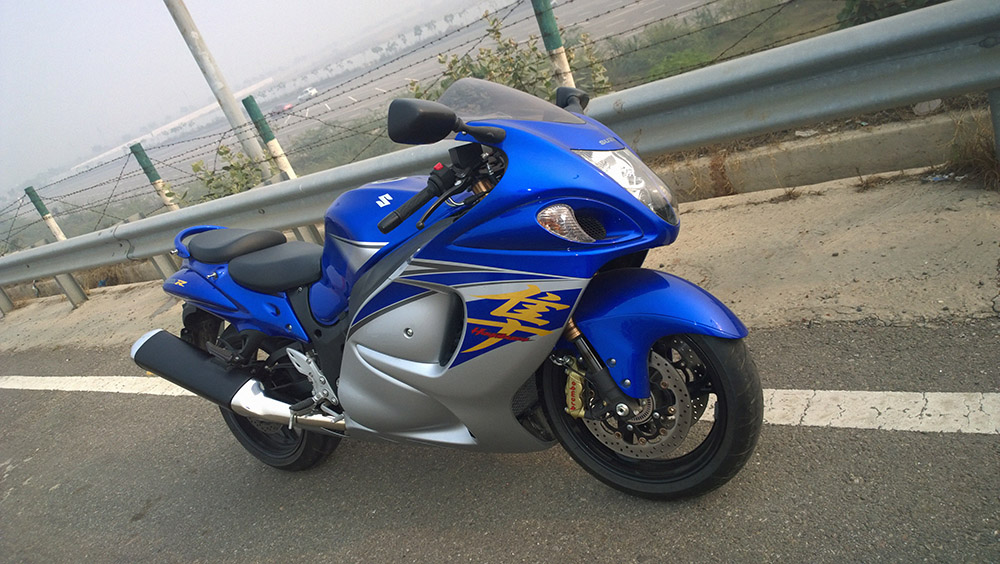 “I was dreamin’ when I wrote this, so sue me if I go too fast
But life is just a party and parties weren’t meant to last.
War is all around us, my mind says prepare to fight
So if I gotta die I’m gonna listen to my body tonight.
Yeah hey, they say two thousand zero zero party over, oops, out of time,
So tonight I’m gonna party like it’s nineteen ninety-nine.”
-Prince

With a top speed of about 300kph, the Suzuki Hayabusa can keep up with just about anything on two wheels. At least in a straight line. And that’s nothing short of amazing, because the Hayabusa, which was launched back in 1999, is now all of seventeen years old. To give you some perspective on how old that really is, 1999 was when the Euro was first introduced, Keanu Reeves starred in the first Matrix movie, the Khmer Rouge was officially disbanded in Cambodia, movie DVDs were still a novelty and listening to music meant buying a CD rather than downloading an MP3. Facebook, Twitter and WhatsApp hadn’t been invented yet, and people actually used to have face-to-face conversations rather than WhatsApp chats, can you believe that?

The world of fast motorcycles, too, was very different back then. Yes, ABS was available, but traction control and the dozens of other electronic-nanny bits that are common today simply did not exist at that time. You bought very powerful, very fast motorcycles only if you were an expert, experienced rider. Then, you opened the throttle and hung on for dear life. Pre-1999, Kawasaki had the mega-fast ZX-11 Ninja and Honda had the CBR1100XX Super Blackbird – both were capable of doing about 260-270kph. And then the Hayabusa came along and asked everyone to fork off. The first-generation ‘Busa’s 1300cc inline-four pumped out 175bhp, pushing the bike from zero to 100kph in well less than three seconds and on to a top speed of 312kph. Well, it was the 1990s after all. Sharon Stone was doing a full-frontal Basic Instinct, Bill Clinton and Monica Lewinsky were going at it in the White House, and Meat Loaf would do anything for love (though he wouldn’t do that), so why the hell not a motorcycle (without ABS, remember) that could do 312kph on the street? Screw the safety Nazis and just ride. The dotcom boom and the subsequent bust still hadn’t happened, and life was still a party. Sex, drugs, rock and roll, baby.

The Hayabusa’s top speed potential must have sent the motorcycle industry’s head honchos scampering back to their leather-upholstered boardrooms, quaking in terror at the possible legal ramifications of a street-legal bike that could do 312kph. And just one year after the beast was launched, Japanese and European bike manufacturers entered into a so-called gentlemen’s agreement, whereby they agreed to limit their bikes’ top speed to a just 300kph. Why 300? Because 250kph was not nearly fast enough for most people? Or maybe because 300kph was deemed just that little bit safer than 312? Who knows. But sod it, because the bikes were only electronically (not mechanically) limited, and electronics can always be hacked into, right? For what it’s worth, post-2000 Hayabusas are officially restricted to 299kph, which bureaucrats believe makes them safer than their older, 312kph-capable predecessors.

It’s the funniest thing ever – countries that have speed limits of 100kph or so allow 299kph machines to be sold in the first place, then allow buyers to tune and modify the hell out of those machines, so that they can go on to do 400kph. It’s all legal until you’re actually caught doing 300kph, which is when you say goodbye to your license. Nudge nudge, wink wink? Anyway, with its near-unburstable inline-four, the Hayabusa has been a favourite of tuners everywhere, especially in the US, where turbocharged ‘Busas that produce more than 500bhp and which are capable of doing more than 400kph, roam the streets fearlessly. Lengthened swingarms, lowered suspension, chrome, garish paintjobs, more chrome, and riders wearing nothing more than a pair of shorts, flip-flops and a mohawk are all part of the Hayabusa folklore in the US.

The Hayabusa has also been available here in India for the last eight years and from this year, Suzuki are even assembling the bike here, which has brought prices down to just Rs 13.60 lakh. That’s still not cheap, of course, but looks like a bargain when you consider the fact that it’s only about half the price of a new Yamaha R1. Now, despite having spent a decade working for various car and motorcycle magazines, I’d somehow never managed to snag a ride on the Hayabusa and was dying to ride one. So, the esteemed Editors of Motoring World stepped in and very kindly arranged for me to ride one for a couple of days. Thanks very much, Sirs.

Suzuki had updated the Hayabusa in a big way back in 2007-2008, with engine capacity boosted to 1340cc, power output hiked to 194bhp, gear ratios revised, slipper clutch added, and braking and suspension components properly beefed up. Styling was also sharpened up a bit, but nothing major. The new Hayabusa can accelerate from zero to 100kph in 2.6 seconds, cover the quarter-mile (400m) in a whisker under 10 seconds, and hit a very sensible top speed of just 299kph and no more. I couldn’t wait to get on board and the guy who handed over the keys probably sensed my eagerness and put in a gentle word of caution: “The Hayabusa has ABS [which it only got from 2013 onwards!], but no traction control, so please start in the low-power mode until you’re more confident with the bike. Enjoy the ride!” Yes, the Hayabusa has a ‘drive mode selector’ with three power modes and I did start in the lowest power mode and worked my way up to the full-fat setting. The surprising bit is, the Hayabusa actually feels happiest only in the full power mode, where it remains fully composed and controllable despite the lack of TC etc. The other two modes, which blunt the power delivery, just make the bike feel strangulated and are best left unused, except maybe in really bad weather or on very wet and slippery roads.

At 265 kilos and with a wheelbase of more than 58 inches, the Hayabusa definitely feels long and heavy at very low speeds – making a U-turn at walking speeds can be difficult. But get out on the open road and twist that throttle, and the Hayabusa truly comes into its own. What can I say about its acceleration that hasn’t already been said before? It reminded me of what I once read about the 1960s Lockheed SR-71 Blackbird fighter aircraft that was powered by twin Pratt & Whitney J58-P4 ramjet engines, which together produced 65,000 pounds of thrust. When an enemy aircraft fired a missile at the SR-71, all it had to do to evade the missile was to accelerate away from it! To me, that’s what the Hayabusa feels like – the acceleration is just mind boggling. On the six-lane Noida-Agra Expressway, almost entirely free of traffic at five in the morning, the Hayabusa repeatedly hit 250-260kph rapidly and effortlessly and would have easily gone faster had I not run out of courage. The sheer intensity, while accelerating from 50-60kph to 250+, is astonishing and you just want to do it over and over again.

Around fast corners, the Hayabusa also handles very well. It is big and heavy, so you can’t brake late and slam it into corners the way you’d do with a 600 supersports machine. Staying smooth is the key here – use the brakes, the handlebar and the throttle like a Sushi chef’s scalpel rather than a construction worker’s jackhammer, and the ‘Busa surprises you with its alacrity in the bends. At high speeds, it turns in quickly, stays rock-solid while cornering and then accelerates out hard, without a twitch or shimmy. In fact, I prefer the ‘Busa’s twin-spar aluminium beam frame, massive alloy swingarm and firm suspension set-up to the Kawasaki ZX-14R’s monocoque chassis and rather weedy swingarm. While the Kawasaki is even more powerful and offers the safety net of traction control, and has a slightly more comfortable riding position, for me, the ‘Busa is the perfect playmate – an always willing partner in the crimes of speed.

So, almost two decades after it was launched, does the Hayabusa still have a place in the world of very fast motorcycles, or is it almost ready to be consigned to the status of a motorcycling anachronism? Well, modern litre-class superbikes are a good 40-50 kilos lighter than the ‘Busa and are at least as powerful, if not more. Also, they are packed with electronics that only enhance safety but also let ordinary riders push harder than ever before, with reduced chances of crashing. What’s not to like about machines like the latest R1, RSV4, Panigale 1299, S1000RR and ZX-10R? Nothing, that’s what. However, for me, the Hayabusa has a unique charm that’s all its own. It’s raw and visceral, wild and wanton, not held back by in any way by a computer hiding beneath the fairing. It’s a man’s motorcycle that makes you feel like Superman. It’s a machine that truly deserves its iconic status. If I had one, I’d never stop riding it.