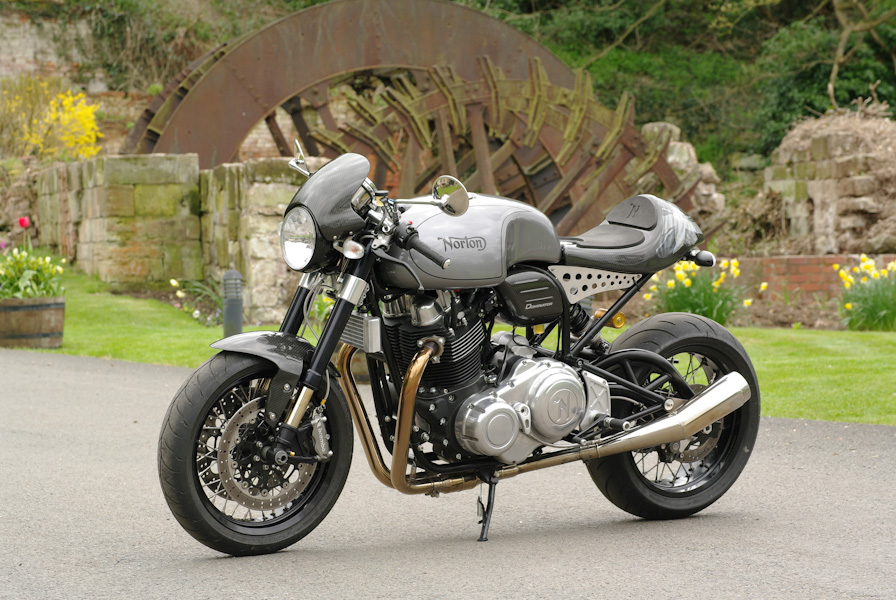 The recent slew of new models from its much larger neighbour, Triumph, has perhaps overshadowed the consistent but less-touted success story that is Norton. Located just 20 miles away from John Bloor’s two-wheeled Hinckley HQ, Castle Donington-based Norton has now secured British government funding to underpin its ongoing growth, and to reflect that has now added a second model to its range which isn’t being built only as a limited-edition product, as was the Domiracer 961 it’s derived from.

It’s now getting on for eight years since since Norton proprietor Stuart Garner, 47, acquired the rights to the historic British marque in October 2008 from its previous American owner, Boston financier Olly Curme, obtaining with it the prototype Commando 961 streetbike which Curme had commissioned from the USA’s No.1 twin-cylinder Norton guru, Oregon-based Kenny Dreer. Since then, heaps of hard graft entailing long hours, a good bit of risk taking, and several major changes in strategy have put the born-again Norton Motorcycles firm back on the map, with what Garner says is ‘getting on for 2000 motorcycles’ so far built and delivered to owners around the world, including as far afield as Japan, the USA, Canada and Australia.

Until now, these have predominantly consisted of the twin-shock Commando 961 retro roadster in Café Racer, SF or Sport guise, which is essentially Dreer’s prototype as subsequently productionised in the UK. But after the sold-out success of the first limited-edition variant on the firm’s existing air-cooled parallel-twin theme, the raucous, raw-edged Norton Domiracer with special monoshock frame which debuted in 2014 and whose production run of 50 bikes with open megaphone exhausts was spoken for within just one week at a price of GBP 24,000 (` 23 lakh), Garner and its creator Simon Skinner, 42, Norton’s head of design, decided to build something that was, well, NOT completely different.

That bike was the Dominator SS, an only nominally less extreme version of the Domiracer of which a total of 200 examples were built in 2015 — just 50 of them for Norton’s UK home market. This once again attracted orders at the same GBP 24 grand sticker price as the Domiracer, complete with the same shapely, costly, hand-made 20.5-litre aluminium fuel tank, but a silenced exhaust which could be replaced by the open meggas as a paid-for option. With this model — which revived one of the most significant names in Norton’s back catalogue — now also sold out, Norton has therefore commenced manufacture of the series production monoshock Dominator selling for GBP 19,950 (Rs 19.17 lakh) as step two in its model lineup, alongside the twin-shock Commando, and in doing so has essentially brought the Domiracer to its street range, examples of which are fetching upwards of GBP 44,000 (Rs 42.28 lakh) on eBay — for twice as much as its original list price. That’s a nice little earner!

The new Dominator represents a café racer for the modern era, that’s quite a bit more civilised than the Domiracer it’s derived from. It still has the same bulldog look that Skinner aimed for in designing its predecessor, with plenty of aggressive attitude by having the front pushed down and the rear lifted, to create a butch-looking stance. To create what, in spite of his insistence that it’s not a retro bike, is indubitably a modern-day version of the Dominators which flew the Norton flag in Swingin’ Sixties street dust-ups at the Ace Café, the Busy Bee and the like, Skinner has designed a revised version of the stock Commando’s chrome-moly tubular steel duplex cradle frame, still with a fabricated backbone doubling as the oil tank for the dry-sump OHV pushrod motor, but with strong overtones of the original Model 88 Dominator’s cutdown Manx Featherbed frame.

While retaining the same steering geometry with the black-anodised Öhlins 43-mm fork, the Dominator’s front end sees the fork legs carried in good-looking aluminium triple clamps that are CNC-milled in house at Norton, then hand-finished. The wire wheels add to the period look, though a more modern contrast is provided by the bare carbon-fibre seat with monochrome Union Jack interwoven into it, the carbon airbox under the seat whose fluted sides recall a period oil tank, the Brembo radial brakes and the fully adjustable TTX36 Öhlins cantilever rear monoshock operated by an tubular steel swingarm giving a 1440-mm wheelbase that’s 20 mm longer than the stock Commando’s. This, plus the raised rear end obtained via the longer monoshock, throws more weight on to the front end for extra grip from the front Dunlop Qualifier when ridden hard. The Dominator which sat awaiting me outside Donington Hall in the spring sunshine was crying out for me to do just that. This is an angry-looking motorcycle that looks ready to pick a fight with all and sundry, and to be doing the tonne just standing still.

For Skinner’s styling indeed has the Dominator bursting with barely restrained aggression — an impression that’s amplified in every sense of the word when you thumb the starter motor and the undeniably butch-looking 961cc parallel-twin motor thunders into life, then settles to a throbbing 1300-rpm idle with a meaty burble when you blip the throttle that comes in spite of the silenced exhaust now fitted to the bike. My test ride in fact had the optional so-called ‘Short Noise’ exhaust fitted, costing an extra GBP 895 but not homologated for street use, though its decibel level is infinitely more sociable than the Domiracer’s was when I rode it two years ago on its debut and somehow avoided attracting the attention of the noise police.

However, thanks to its 270º crank the new Norton sounds more like a 90º V-twin Ducati, not a classic British parallel-twin — which doesn’t mean it doesn’t sound good, though, just not like your expectations tell you a trad-type Norton twin like this one really should. Though the engine is completely unmodified internally, it actually makes 4 bhp more power than in Commando guise, says Skinner, not only because of the open meggas, but also thanks to the 1.5-litre bigger airbox and the 35-mm throttle bodies’ 20-mm shorter velocity stacks. But it’s the meaty grunt peaking with 9.07 kgm available at 5200 rpm that really dictates how you ride this bike, short-shifting around 5000 rpm to surf the waves of torque delivered via a practically horizontal curve from barely off idle — yet it doesn’t run out of breath up high, just keeps on pulling almost to the redline if you really insist.

But because of that muscular acceleration, there’s really no point in revving the Dominator out to its 8000-rpm limiter, even if the single gear-driven counterbalancer installed in the motor means there are no vibes up high if you insist on doing so. Okay, so maybe Skinner was right — it’s not a totally retro racer-with-lights, so at least you’ll have a chance of surviving a ride with all your teeth fillings intact, which wasn’t always the case with some classic Norton parallel-twins of all our yesterdays that I’ve ridden.

The born-again Dominator is indeed a satisfying blend of old and new, a mixture of period attitude combined with modern civility — like brakes that work brilliantly, tyres that warm up fast and grip well on a cool spring day, and suspension that while tautly set up as you’d expect a genuine sportbike’s like this to be, also irons out bumps and lays that hefty torque to the ground with a degree of compliance that makes this a very confidence-inspiring bike to ride hard. While completely uncompromising in its road manners, with that aggressive punch in the gears, low-down fuelling is good, as when you’re just crawling along in a line of traffic. But then spot a gap, gas it up hard and the Norton catapults you forward in a totally addictive way and the meaty torque means it’ll take almost any gear you throw at it.

It pulls hard from barely off idle, then strongly from 2000 rpm upwards — this is an ultra-usable motor, with 4000 revs the gateway to more serious urge; from there to where you can feel the engine peak out at 6500 rpm, is the happy zone. Its 5-speed transmission certainly doesn’t need a sixth ratio, because there’s such a wide spread of torque and power that you can change gear when you feel like it, not because you must. And the Norton’s shift action is now flawless — infinitely better than the early Commando’s that Garner’s guys turned out back in the born-again brand’s start-up days.

Handling has always been a strong point of any Norton, ever since the debut of the Featherbed frame back in 1950, and the new Dominator lives up to the expectations of the marque. It steers faultlessly, tipping easily and controllably into a turn on the radial brakes, as the Öhlins fork absorbs the weight transfer and settles the bike before you peel into the apex. Plus, the way the raised rear end has effectively tightened up the steering geometry makes it turn in really well, without being unstable on the brakes, and you can use a surprising amount of the considerable engine braking on offer without getting the rear wheel hopping. Weighing a claimed 15 kg less than its Commando cousin, means there’s less to stop, the 175-kg Norton feels light and agile, yet stable and forgiving, a confidence-inspiring motorcycle that you learn to trust completely over a variety of surfaces — hitting a bump cranked over in a 100-kph sweeper doesn’t unsettle it at all.

The rear Öhlins monoshock may have taut damping settings dialled in, but with 140 mm of wheel travel available it just shrugs off bumps, even on the angle once committed to a turn. And the Brembo twin-disc brake package provides controllable, effective stopping power with just the right degree of sensitivity from the radially-mounted calipers. This is a proper café racer, but in a modern context — even the riding position is more accommodating than they used to be Back Then, with not too long a stretch over that shapely fuel tank to the twin, relatively high-set clipons. In fact, the Dominator doesn’t seem as rangy as you might expect with that longer wheelbase – it feels relatively small and compact to sit on, especially compared to the stock Commando 961, and that’s a key reason in what makes it seem so chuckable and agile. Truly the best of both worlds, old and new, classic and modern.

Norton’s progress was recognised last July, when the UK government’s Chancellor of the Exchequer (aka finance minister), George Osborne, visited Norton’s base at Donington Hall – the former British Midland airline base that Garner bought in 2013 to house the entire Norton operation, management and manufacturing combined – to announce £4m of UK Government support. This will help fund the BMMA/British Motorcycle Manufacturing Academy, based at the site, which has already begun training more than 90 apprentices in the Norton plant. Garner has also raised over £10m in capital investment funds, which is being used to develop a 1200cc V4 engine that will power a new-generation luxury superbike that’s due to be revealed at the NEC Show in Birmingham in November, and a related range of liquid-cooled 650cc twins, both supercharged and normally aspirated.

It’s been a struggle for Stuart Garner to get Norton re-established in the global marketplace — but it’s a battle that he now shows every sign of winning. That’s very appropriately marked by the debut of the new Norton Dominator, making it indeed yesterday once more — in every sense.