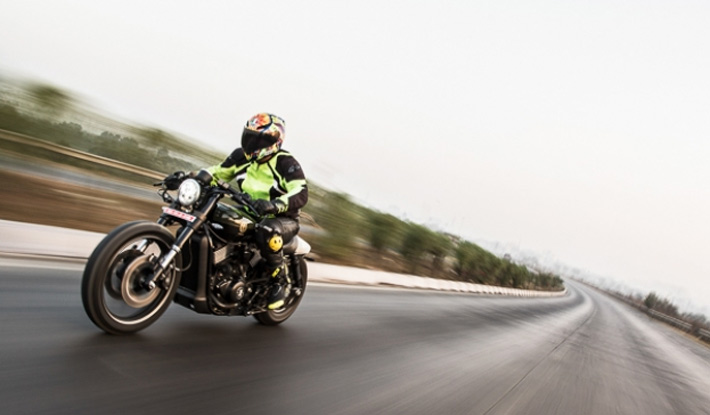 In the past 10 years, we’d met twice. And as I stood there looking at my idea of the perfect Harley-Davidson Street 750, waiting for the guy who’d built it to show up, he was the last person I expected to see as I turned around. Saurabh Shirke is an old friend, one of those that disappear in the rear-view mirror as time flies by. What better way to reappear than with a café racer, right?

This bike, called the Katanga Uno, is based on the Street 750 and is the first product of MotoMiu, formed by Arjun Bafna and Shirke. ‘Katanga’ comes from a subspecies of African lion, the ‘Uno’ is because this is MotoMiu’s first bike (‘First Lion’, then?), while the ‘Miu’ bit being Bafna’s daughter’s nickname. Cute, no? Oh, and the number 31 you see on the bike’s tail is her birthdate. Looks right at home on that old-school green/black/gold paintjob, it does. Adds a racing touch to what is already a looker.

When I first saw the Uno a few months ago, I was floored. Today, after seeing it again, I still am. To me, the Street 750’s full potential was only a pair of clip-ons and rear-sets away, perhaps with better tyres, while at it. MotoMiu had a Showa front fork from a Night Rod Special lying around (Bafna owns Harley’s Mumbai dealership, after all), which they obviously thought would look better on a Street 750. That explains the 19-inch front wheel and twin disc brakes, then.

For everything else, a CNC machine, drilling away at high-quality T6 aluminium billet (lightweight yet strong), was employed. This gave shape to the four-way adjustable clip-on ‘bars, the fully adjustable rear-set footpegs and a fork brace that also acts as the headlamp mount. Add to these details a single-seater layout, an aftermarket LED headlamp, ‘bar-end mirrors, a fatter 170-section rear tyre on the 15-inch wheel and a classic paint job, and you have a stunning coffee machine. Then there’s my favourite part — that heat-wrapped exhaust. It does justice to the lion-inspired name, for sure.

The Uno’s sound is what early mornings like this one should be made of. It’s not ear-splittingly loud, but it gives that Revolution X motor the chance to sing at the top of its V-twin voice. Also, the bike’s lost around 20 kg, despite the heavier front fork and tyres. Lots of metal to scrap on the Street, eh? Anyway, on the move, the bike feels much more planted than a stock Street 750. The riding position is a really sporty crouch without being cramped, and you can get as frisky in corners as you can dare with a one-off custom bike that belongs to someone else.

With a setup like this, the bike loves going around corners, and the motor finally has a better dynamic package built around it. The bike sounds glorious, looks awesome and goes well, too. All this comes at a price, though. If you want a bike like this, it’ll set you back by Rs 9.5 lakh including the cost of a brand-new Street 750. If you think you can do fine with the USD front fork from a certain orange motorcycle, the price goes down to ` 8 lakh including the cost of a new Street 750. Too much? Probably, yes. But I suppose you do get what you pay for.

Gripes? Well, I think the exhaust should’ve ended where the heat wrap does, preferably with one of those SuperTrapp end-can numbers. The upward-angled slash-cut pipes are more of a chopper design cue. Also, it would’ve been nice if the headlamp cowl was kept on, if just to retain more of the Street’s identity. And the tail-lamp and indicators are orange, too, if you know what I mean (Shhh, don’t tell anyone, okay?). However, these are things that bother only me, so no one’s going to care about them.

What matters is that the Katanga Uno is a custom motorcycle that feels as sorted as a stock one. Nothing’s going to fall off halfway through a corner and every custom part is built to last. What matters most, I suppose, is that the bike is more fun to ride than the bike it’s based on, without sacrificing reliability or practicality. And that’s something custom bikes aren’t exactly famous for. MotoMiu is off to a promising start, and from surreptitious WhatsApp images sent from a dark garage, their next bike promises to be even better. Looks like I’m going to see a lot more of Saurabh from now on.