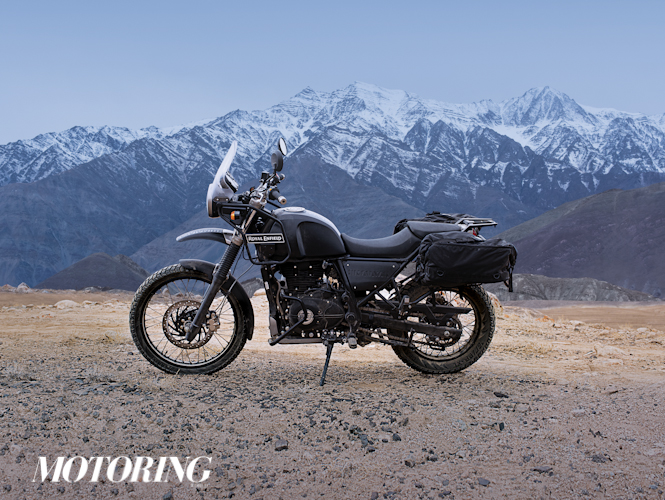 Fortune favours the brave, they say. If that axiom were to apply itself to appearances, then this here is probably the most blessed motorcycle to have set wheels in India. The Royal Enfield Himalayan has a definite death-or-glory heroism in its lines. It has nothing in common with the crowd-pleasing pseudo-cruising Thunderbird or the retro-timeless Classic series. It looks like the real deal, an honest motorcycle that’s built for end-of-the-world conditions. It’s a brave move from Royal Enfield, for sure. But it’s not hard to see why.

After decades of thumping up Himalayan roads, Royal Enfield was bound to think of this motorcycle sooner or later. And in living up to its history, the company seems to have completely broken away from its traditions with this motorcycle. For example, the Himalayan carries an all-new motor called the LS 410. The ‘LS’ stands for ‘long stroke’, something that gives all Royal Enfields their torquey nature, while the number announces the new motor’s rounded-off displacement. Most importantly, the new motor uses an overhead camshaft instead of the almost-historical pushrod system that Royal Enfields employed for valve actuation. Enough of a break away from tradition, we’d say.

Royal Enfield claims that the 15-litre tank gives a range of approximately 450 km, which works out to about 30 kpl. Decent enough, we suppose. What should be more impressive, hopefully, is the improved refinement of the motor, thanks to the OHC layout. Here are the numbers: 411cc, 24.5 bhp at 6500 rpm, 32.26 kgm at 4000-4500 rpm and 182 kg. Royal Enfield has managed to get a familiar amount of horsepower at familiar revs out of the new motor. And it’s a familiar weight, too. The Himalayan is the lightest Royal Enfield today except the Bullet 350, but it’s still too heavy and not powerful enough for our liking. Thankfully, that’s not what the bike seems to be about.

You see, the Himalayan is about the new format it creates for Royal Enfield and Indian motorcyclists. The company has always been known for hitting the open road and going places, and the Himalayan promises to be the best Royal Enfield yet for that purpose. Despite its barebones appearance, the high weight hints at substantial cycle parts that can hopefully take a fair amount of abuse. It features the first-ever monoshock on a Royal Enfield, something that allows for that tall and purposeful stance. Along with a long-travel 41-mm fork at the front and 220-mm worth
of ground clearance, the Himalayan promises to be a capable motorcycle for Indian
riding conditions.

The front wheel is a 21-incher wrapped with a 90/90 tyre, while the rear wheel is a 17-incher with a 120/90 hoop around it. The tyres are by Ceat and are the only thing on the Himalayan that we have reservations about based on our experiences. That will be a major factor to look out for on our first ride of the bike. Perhaps the sheer weight of the Himalayan will force those tyres to find grip. However, the rest of the bike — the fork brace, the bash plate, the luggage-mounting points, the comprehensive meters — hints rather strongly at great attention to detail, so we hope we’re wrong about the tyres…

As far as first looks go, the Himalayan is a deeply impressive motorcycle from Royal Enfield. The company seems to have thought of everything with this one and gotten most things right. It’s an important bike for Royal Enfield and also for Indian motorcyclists. Most importantly, looking at it immediately makes you want to ride it. Fortune, it seems, is on its way to reward the bravery of Royal Enfield.