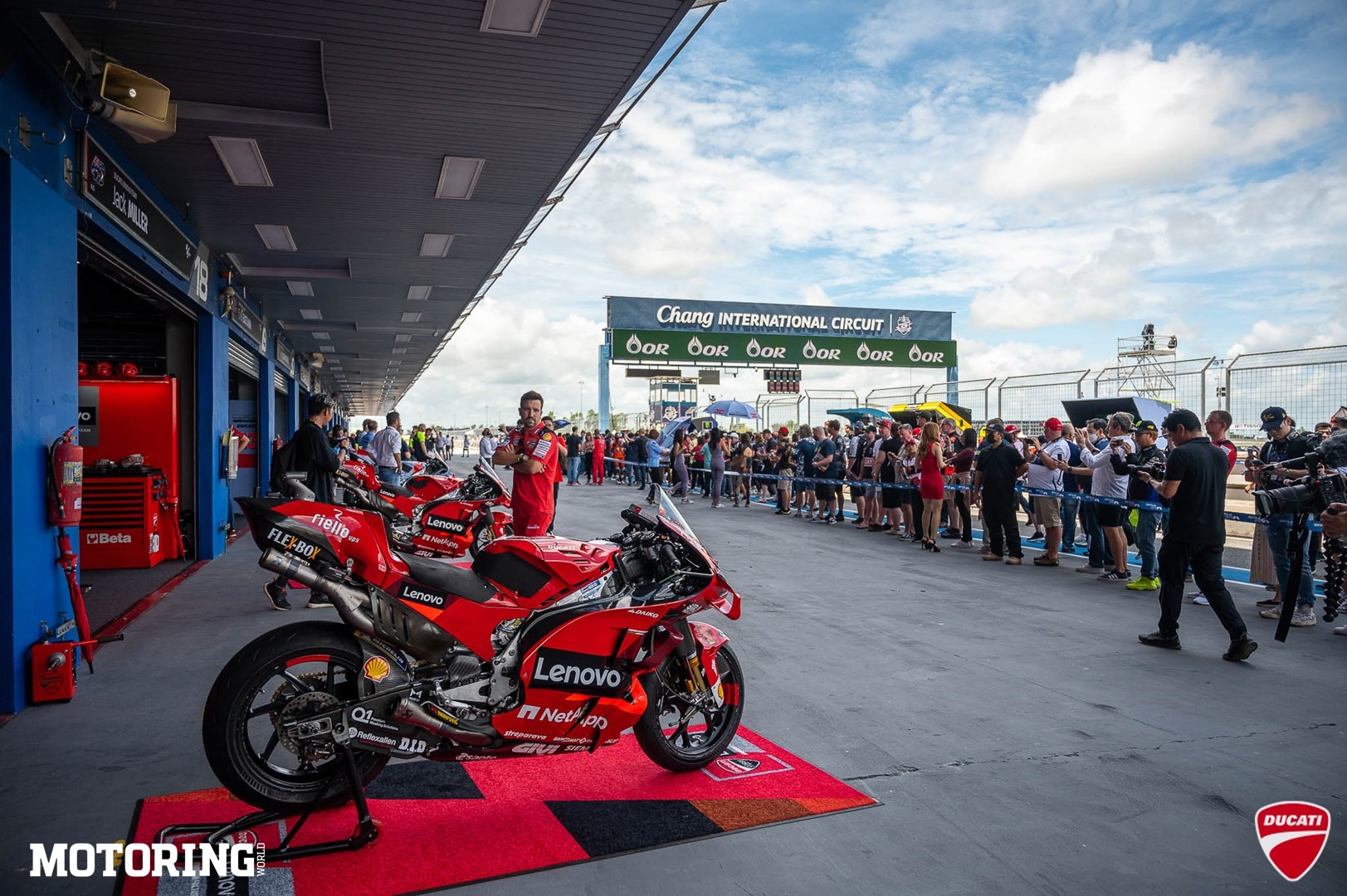 Every time a MotoGP race would air on the television during weekends, I would be glued to the screen, fascinated by riders riding motorcycles in ways that seem near impossible to comprehend. I am sure I am not the only one here who does that. From breathtaking speeds to crazy lean angles, to some of the most daring and controversial overtakes, MotoGP is a sport that has always kept its viewers on the edge of their seats, just like how the riders are seated in the race. Over the September 30 to October 2 weekend, the MotoGP was held at Chang International Circuit in Buriram. 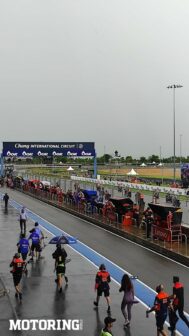 If you know nothing about these races, MotoGP is the largest and the most exciting motorcycle race that takes place all over the world. Each event spans three days, from Friday to Sunday — Friday being a practice day, Saturday for qualifying, and Sunday for the main race. Until now, I had only been able to experience a MotoGP race weekend through a television screen and I’ve got to tell you this, the joy of watching and hearing these machines ridden at full clip is simply out of the world. 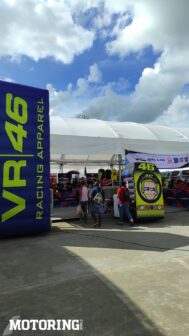 If you are from India and want to experience a MotoGP race, the Thai GP is the most affordable one on the calendar. It is not just about the tickets to watch the race, but also in terms of travel, stay, and other touristy things that one can do while being there. As for me and a bunch of other journalists, Ducati India had been kind enough to fly us down, along with a few Ducati owners, to witness the Thai GP. 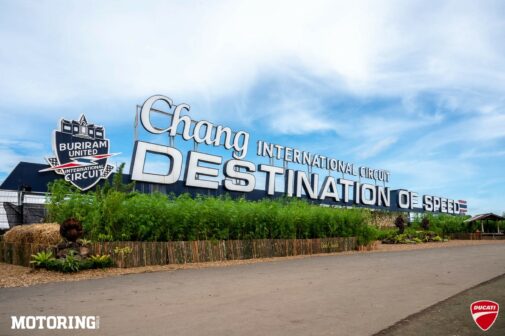 The alarm clock was set for 5 am, but I was wide awake before it even went off. I had tried to get some shut-eye after all the travel, but I was too excited about what was in store for the day. After a wholesome meal, we all boarded the bus to head for the track. While the journey to reach the circuit was two hours long, it was easy to tell that we were nearby, as many motorcyclists had started to appear on our route. As we arrived, we were surrounded by Ducati, Yamaha, and Honda colours, and lots of other motorcycles. For today, it was qualifying so the plan was to watch the riders set their fastest lap time from the Ducati VIP lounge, and later, head for the paddock.

By the time we got to the viewing gallery — which was located 200 metres before C12, the last corner before the start-finish line — the qualifying session for Moto2 had already started. It was just fascinating to watch the riders braking hard as they leaned their bikes into the tight right-hander, before getting hard on the gas for the grandstand straight. Watching the riders carry so much speed and pace, I could only imagine what it would be like for the MotoGP bikes, which I didn’t have to because they were up next.

I don’t think I have ever seen a motorcycle lean into a corner while being only centimetres off the ground below. With knee and elbow sliders getting scrubbed, there is no doubt about the level of commitment and skill set that is required to control these 1000cc race machines. The exhaust note and the pops on downshifting from the V4s and the inline-fours are distinctive and unique for every motorcycle. Soon after the 15-minute qualifying session was over, the time charts were out, and rookie Marco Bezzezcchi had secured his first MotoGP pole position, followed by Jorge Martin, and then Francesco Bagnaia.

The excitement for the day was far from over as soon after the qualifying session, Ducati had managed to sneak out Jack Miller (having qualified in the seventh position) from his day’s schedule for an interaction. As luck would favour me, I managed to get my Ducati cap autographed by him just before he headed back to the pits. Getting to be this up and close to a MotoGP rider is a dream come true in itself.

However, I was a little prepared for what Ducati India had planned for us next. You see, the paddock is the area behind the pits where riders, the team principals, and the rest of the teams, can be spotted. Having received passes for the paddock, I managed to get a picture clicked with Cal Crutchlow, Lim Jarvis, and Denial Petrucci. And if that wasn’t enough, the folks at Ducati had managed to carve two small windows, one was access to the pits of the Gresini Ducati team where we got a glimpse of Enea Bastianini and the GP21 bikes, and the second was the pits of Ducati Lenovo factory team, where we got to soak in the beauty of the GP22 bikes without the outer fairing. 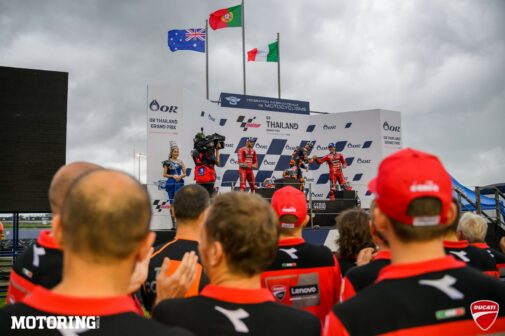 With that, the qualifying day came to an end and I was already excited for the next day’s race day. The race day at a MotoGP weekend starts with Moto3, which is followed by Moto2, and then finally, out come the MotoGP bikes. With weather predictions indicating a downpour, Moto3 and Moto2 turned out to be wet races — the latter had to be red-flagged due to the track conditions.

For MotoGP, the riders headed out for a sighting lap to get a sense of the track condition before heading back into the pits. Luckily, the rain gods showed mercy by taking a break. With the second sighting lap done, all the bikes lined up on the grid, and soon, the environment was electrifying as everyone was getting ready for the main race. 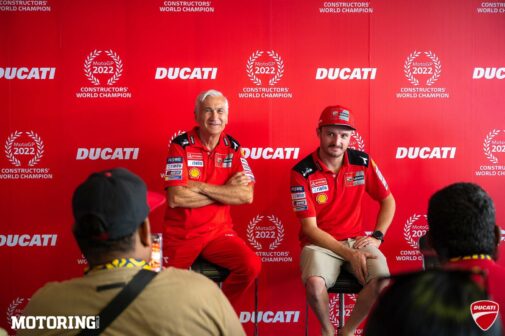 Standing in the grandstand not too far from the crescendo of the twenty-five-odd bikes with throttles open, waiting for the lights to go out. The sight of MotoGP bikes, right from exiting the pits to accelerating hard on the track, is an experience right up there with your first kiss, your first motorcycle ride, and your first flight. The engines that power these maniac machines are more or less unsilenced, and the wave of sound that exits the pipes is physical and violent.

You will feel your hair stand on end, you’ll get goosebumps, feel your eardrums rattle, and even take a step back the first time you experience it. It’s nothing like the smooth, evocative sounds of the litre-class bikes that we are used to on our streets. These bikes sound violent and destructive. The view from the grandstand allowed me to see a little more than 50 per cent of the circuit, so not much was missed. Every time the bikes accelerated out of the last corner, the front end would skimp over the wet track, catapulting ahead with loud pops of the exhaust on upshifts. 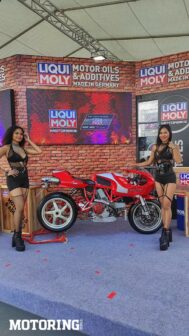 The race was a close fight between the two Ducati riders, Miller and Bagnaia, and Miguel Oliveria from Red Bull KTM. Johann Zarco and Marc Marquez had climbed up positions mid-race, but couldn’t secure a podium finish. The wet race of 26 laps saw Oliveria completing the race in pole position, followed by Miller in second, almost at the rear wheel of the KTM, and Bagnaia in third. It was a proud moment to see the team that we were rooting for had secured two places on the podium, strengthening their standing in the championship.

As we walked back to our buses, I was having a tough time placing what was the coolest thing that I had experienced this weekend. From experiencing my very first MotoGP race to clicking pictures with the riders, to making my first VR46 merchandise purchase, it would be unfair to rank them. The paddock was a cool place to be. If you have never been to a race weekend, I can assure you it’s a lot of fun, as there are a lot of things to do and see that are worth seeing once in your life. And that ticks the MotoGP experience off the bucket list!